If you just want to see photos, video and our winners, go to the Event WIKI.

Well, we didn’t actually celebrate that, but between SAP InnoJam and it’s predecessor, SAP Innovation Weekend, we made it to 10 installments of this hack event co-located with SAP TechEd. Fits nicely with this year’s global community theme SCNis10. Don’t you think?

Now, it’s somewhat hard to write about this event. … I just cannot find the right words. … We not only made it to double-digits in terms of occurrences, we also had our wining team make #1 at SAP TechEd DemoJam the next day. … This is just so amazing and I still doubt myself and my perception of reality, thinking that I will wake up tomorrow in a hotel room in Amsterdam starting a Groundhog Week time loop. …

OK. Maybe I’m so baffled because my view is biased. I won’t go into details here, but let’s just say that I would have loved to resolve a few things a lot earlier than they eventually did. So I went into day 1 of this InnoJam hoping to keep the show train on track. Ultimately, my fears proved so wrong. There is no reason whatsoever to be unhappy about the event and it’s outcome. Quite the opposite. I’m more than pleased with the healthcare theme and how teams approached the rather serious topics we put forward as challenges. They took it to their hearts to make the best of the sometimes difficult task to learn enough about the problem, even though they had limited direct access to first-hand users. I actually saw people ringing up friends or relatives more than once. In fact, I gave away my own phone for a few calls. If you see things like that, if you see your participants dive into the topic, you know that you passed the first hurdle. 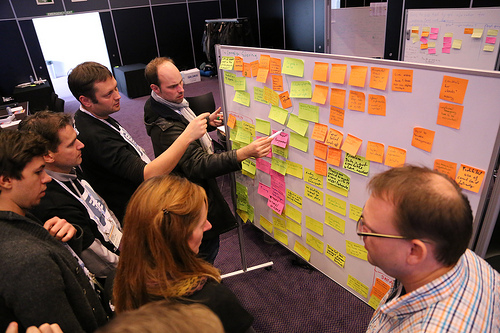 When you also pass the second hurdle, there is pretty much nothing that can spoil the event (apart from freezing everyone to death with the aircon – *hint*hint*). We did that later at night, passing the hurdle that is, not freezing everyone to death (although it was a shivering close call at one time). We achieved to hook up our teams with all our key technologies, including SAP EMR Unwired and the machine-2-machine software that came with a number of sensors. During presentation time we saw SAP HANA, UI5, EMR Unwired, fancy mobile apps on BlackBerry devices; participants running on stage, pretending to be hospitalized and saving lives. That alone was worth all the effort to put this event together. I suggest you go and watch the replay. 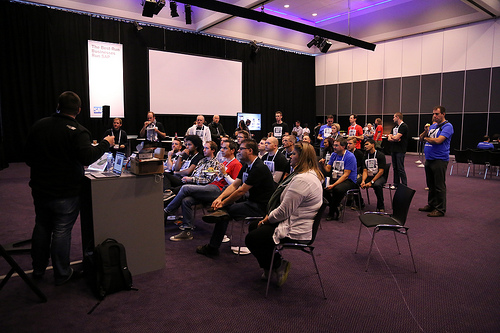 So there we were at the end of day 2, all happy and relieved that everybody had so much fun. Participants and supporters happy to see the inside of their hotel room at a decent hour. Ourselves happy that nobody got injured (it happened before). … For our winning team, however, the fun was about to continue. They spent the entire next day polishing their app prototype, as well as their story, in preparation for the big showdown at TechEd DemoJam that evening. Team CloudSitters vs. 5 other demos. 30+10 hours of development vs. several months. And they made it. Unbelievable. Compelling story, simple app and a superb delivery on stage. Congratulations: Matthew Riches, Andreas Profitlich, Christian Braukmueller, Twan van den Broek, Uwe Haneke, Niels Willems, Martijn van Dortmont, Tommy Aarts, Adrian Matys, Paddy Uduji

YES WE CAN! … provide a platform to produce a DemoJam winner in less than 48 hours. I’m so proud of everybody involved in SAP InnoJam, past and present, participants and supporters.

For this installment, SAP TechEd InnoJam Amsterdam 2013, I want to thank all participants and the following people. All of you have been instrumental to make this event a HUGE success! THANK YOU!

=> Go to our event WIKI, if you want to find all articles about the event, see photos or videos, check on the winners, etc. <=

So this is it. InnoJam season 2013 is over. I’m glad that I played my humble part in it.

To all of you: Enjoy the festive season and hope to catch you in 2014.

I thank you (and the whole team) for the strenuous effort you all pushed into this (and the former) events.

The infrastructure and the organization was improved each time .. and this makes it easy to jump into the tasks and topics.

It's not just us - the participants - that were more or less active within all these hours.

All the design-coaches, technical experts, domain experts and innojam staff were there for motivating and supporting us.
That's especially remarkable, because Sunday 9am is not the favorite volunteer time for "customer support".
Special thanks to #innojamhelp 🙂 for taking care of the room temperatures.

An incredible experience ...  with a fantastic team of InnoJam'ers.

- I still have the #WideGrinOnMyFace and a little tear in my eye. -

I had a great time as Design Thinking coach. It was my first time at Innojam and I could see how much the participants love to be there and how deep they dived into the topic.

Thank you and the team behind InnoJam for giving me the opportunity to participate. It was an amazing experience. And congratulations for all the people involved, specially the winners.

SCNis10 and the Innojam's 10th installment is most definately a landmark.

I agree with Christian Braukmueller who has a little tear in his eye.

You see, for me, this year's Innojam in Amsterdam was the realization of a twinkle in the eye I had a number of year's ago during the Process Design Slam (in fact it was exactly 5 years ago that we starting merging process design, business case and development during TechEd Vienna) http://scn.sap.com/people/krishna.moorthyp/blog/2009/10/22/process-design-slam-2009-on-the-way-to-vienna

I had a dream....that such collaboration would find it's way to the Demo Jam stage and be recognized.  Much of that dream was realized this year in Amsterdam with a collaboration that was multi-cultural , multi-generational,  multi-abilities....but sadly not yet multi-gendered.  But hey....we can't have all dreams realized at once and there is still room to grow.

Thank you Uwe.  This year you and Marek Kowalkiewicz and extended team created an atmosphere of cooperation, collaboration and calm.  What a great 3 C's!

It will be interesting to see where and how this event evolves in the coming year(s).

Thanks Uwe, to me you will always be a legend, unruffled and unshakable, a consummate professional and I am already looking forward to see you at DemoJam and TechEd again next year!

I thought that our little crash course, explaining all the different <x>-Jam's in the SAP-communiverse, was a bit more successful.    😉

But i'm sure: no matter what kind of jam .. you would even rock a pre-SAPTechEd TrafficJam in 6 minutes.

Thank you for the great team-work

Still grinning after all these days

I think its fair to say that my Jam's were always a little confused! Either way I'll turn up to one of them next year! See you there???