Last week, the SAP TechEd EMEA took place in Amsterdam, the Netherlands from November 5 -7, 2013. SAP University Alliances was happy to participate in this event not only as an exhibitor but also had the chance to invite students and professors from the University Alliances community to attend the conference. In total, 24 professors/ lecturers and 19 students from UA member institutions in Australia, Belarus, Bulgaria, Denmark, Germany, Italy, Jordan, Netherlands, Poland, UK, and the USA participated at SAP’s premier technical education event.

The event was kicked off with the pre-conference SAP InnoJam. 19 students, professors and lecturers from the UA community, equaling nearly 1/3rd of all SAP InnoJam participants, attended this two-day coding event. The motivation was extremely high and all teams stayed up really long – some even made it through the whole night (maybe they already internalized the theme of the upcoming keynote – Code enables freedom ;-)).  In the end, the team “CloudSitters”, who developed an app that should reduce the anxiety that parents feel with regards to the Sudden Infant Death Syndrome, was crowned as the InnoJam winner.Prof. Uwe Haneke from the University of Applied Sciences Karlsruhe was part of this group and also presented the prototype during the finale on Monday. For further event coverage with regards to the SAP InnoJam please go to the official wiki page.

On Tuesday November 5, SAP TechEd officially started with the opening keynote. Bernd Leukert, member of SAP’s Global Managing Board and Head of Application Innovation, welcomed more than 4,000 attendees with the idea that “Code enables freedom” and addressed topics such as the new user experience created by SAP Fiori. The keynote was also the start for the dedicated UA activities onsite. The Tuesday was packed with 3 expert networking sessions, 2 roundtable discussions, the visionary award ceremony as well as a faculty meeting. During the expert networking sessions a student team from the University of Applied Sciences Würzburg, Germany presented their FuelCast app, an app they developed during a student competition. Furthermore, Dr. Bernd Welz informed the attendees about the latest courses on openSAP, SAP’s massive open online course initiative. In addition to that, a session and roundtable about SAP HANA Enterprise Cloud for Universitites was hosted.

One highlight for all participating students was definitely the Early Talent Roundtable in the afternoon. Björn Goerke, Executive Vice President SAP HANA Enterprise Cloud and newly appointed SAP CIO, together with Uwe Kylau, Developer Advocate and SAP Teched Amsterdam InnoJam Lead, gave valuable career advices and informed the students about early talent job opportunities at SAP. Moreover, SAP’s new innovative workspaces such as the app house environment and the workplace culture were presented. In the end, the students had the chance to address their questions directly.

During the visionary award ceremony, five outstanding professors from the UA community received a certificate of appreciation for their significant effort in the UA program by supporting others to develop, share and support the use of SAP solutions in the classroom. The visionary award was handed over by Dr. Bernd Welz and Ann Rosenberg to the following lecturers/ professors: 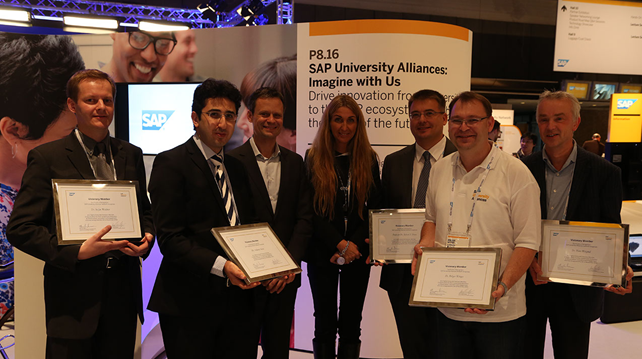 The first day of SAP TechEd EMEA was concluded with the networking reception and the Demo Jam. The 10th Anniversary of the SAP Community Network was celebrated on stage. This is also a celebration for the UA community as our dedicated University Alliances Community space is part of the SCN since January 2009. Since then, all our curricula are stored on the UAC and the community functions as a platform for academic discussion and knowledge transfer. After the festive speeches and T-Shirt bombs into the audience, Ian Kimbell, the Demo Jam Master of Ceremonies entered the stage and officially opened the Demo Jam spectacle. Thanks to Ian, one of our student teams from the FuelApp competition, Dominik Conrad and Steffen Drews from the University of Applied Sciences Würzburg, had the chance to function as the opening act for the Demo Jam by presenting their FuelCast app to the audience. Afterwards, the 6 selected Demo Jam teams, including the winning team of SAP InnoJam, presented their demos to the enthusiastic crowd. In the end, it was a neck-to-neck race. In the end, the clapometer decided and the SAP InnoJam winner team “CloudSitters” came in first place. This is really a milestone in the history of SAP InnoJam as this is the first time ever that the InnoJam team wins the Demo Jam with an app they only created in 2 days! Congrats to a job well done!

The UA agenda on Wednesday kept up with the speed of Tuesday and various agenda topics were offered to the UA attendees. During 2 guided tours, they got insights into the IT infrastructure as well as to the content set-up. Chip Rodgers provided a guided content tour through the exhibition area and outlined the different area concepts and the purposes behind those (clubhouse, hands-on sessions, theater halls,…). Andreas Koch led us to the backstage area and explained the technical equipment that is used to organize and run SAP’s premier technical education conference. This included amongst other things the wireless Internet connection set-up or the amount of technical devices that are used on the venue. This was complemented by funny stories and facts and figures. Furthermore, everyone had the chance to address their open questions about SAP TechEd. 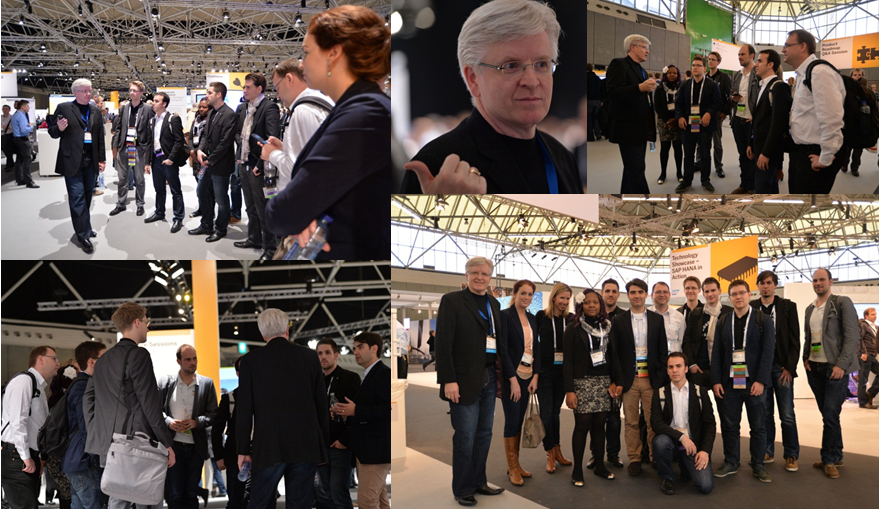 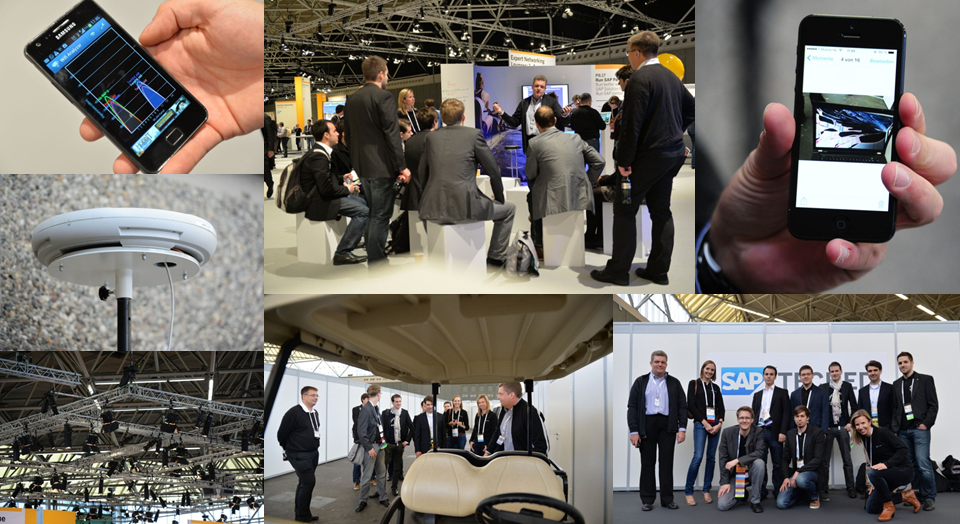 The Wednesday was concluded by a further expert networking session and the celebration night. The student team from the University of Applied Sciences Karlsruhe, presented their results from the FuelApp competition to the interested audience. In the evening, The Fray played live in concert and ensured that there is also time to relax after a busy day’s work.

The Thursday was a less eventful day in terms of the UA agenda. During an expert networking session in the afternoon, Ann Rosenberg hosted a round-table discussion about building the new SAP ecosystem and the skills that are needed from the talents of the future. Stefan Hanke, student from the University of Applied Sciences Brandenburg, joined this discussion and shared his experiences, ideas and thoughts with the audience.

In addition to that, several discussions with SAP customers and partners took place at the UA booth. The University Alliances team was also part of several videos and SAP TechEd Live interviews throughout the week:

All in all, it was an amazing week in Amsterdam for the attending students, lecturers, and professors from the UA community. I am already looking forward to the next SAP TechEd events!

Last but not least, a big thank you to the event photographers and film teams who captured the moments onsite. This helps me to remember the great spirit onsite and indulge in reminiscences ;-).