Lots have happened that I wanted to share with you since the last time I did a blog on one of the ways that SAP’s CSR efforts – The 2nd SAP social sabbatical program in Brazil  has shaped out in Porto Alegre, Brazil.

October 31st, Thursday, we did our final presentation and the first impressions that we got from the various stake holders so much more than justifies why we in the corporate world should work closer with the community, both by improving the lives of the communities as well as great learning’s that we get from the community in return. Reflecting back and typing these notes, just as I have mentioned in the beginning of my project, I can truly attest to this unique win-win-win social sabbatical.

An account of our input to the project in the eyes of one of our stakeholders posted here says a lot. (It’s in Portuguese, need to use a translate tool for an English version – but is truly a worthwhile read). This entry by an influential member of the Porto Alegre business community, describes what we have accomplished in a short time frame. I felt really proud of a job well done, and I am pretty sure that this is the sentiment of both Sarah and Piotr, my colleagues in the project.

Our project – resurgence of the 4th district of Porto Alegre, has a number of stake holders. The local community who work and live there, businesses and enterprises who have operations already in the district or planning to start operations within the district, schools & universities, the creative industries in lots of its forms (the traditional arts, visual arts, puppeteering, entertainment in general, galleries & studios, tech shops, Coworking spaces, start-up communities, …), and obviously the municipality which has the mandate to govern the city.

Over the final days of our work, we focused on collating and producing a framework on how to structure the ever increasing content that we have amassed from the various interviews, research content as well as design thinking exercises that we worked on with some of the stakeholders and providing a recommended action for the community.

We also had the opportunity to meet up with a world leader in urban planning, Dr. Marc Weiss and his wife Nancy, both currently in Porto Alegre working with the state government thru their global urban planning NGO, which was very valuable for us in terms of validating the concepts that we were working on, as well as giving us further advise on urban revitalization projects that happened in different places that they have been involved in at one level or the other. A great opportunity for both our team, and the project!

Working with our host, Nos Coworking and CITE, we focused on the frame work where each player in the ecosystem of the 4th district can be represented, has a voice as well as be a driving a force on the resurgence of the district. As is the case with projects involving lots of stakeholders, one of our recommendations is to create a ‘steering committee’ which is usually associated to projects (IT projects in our world), but equally applicable in other spheres as well, with a slight change – ‘an association‘ of like-minded people with a common vision and mission, thus in essence advocating the beginnings of a community association with fundamental structures and responsibilities in place.

The second recommendation which we worked on, especially with the mindset of advances in technology and the wave of the millennial generation that is working and very adept with these tools, is a bottoms-up approach whereby an idea can be formulated and enhanced with the right filtering level … A level that ‘crowd sourcing’ tools can vouch for at beginning of development of the concept, to a higher level, where an expert in the field can provide valuable feedback and validate the concept, to a final level where pragmatism takes over and availability of finances and resources as well as practical considerations such as, licensing, rules and regulations, the environment, etc… Dictate the next course of action.

Also a proposal, “The Idea Bank“, cause most ideas do not reach the desired level of a solution proposal or a project stage because of myriad reasons that could be worked on, amended to and be able to finally reach their true potential. 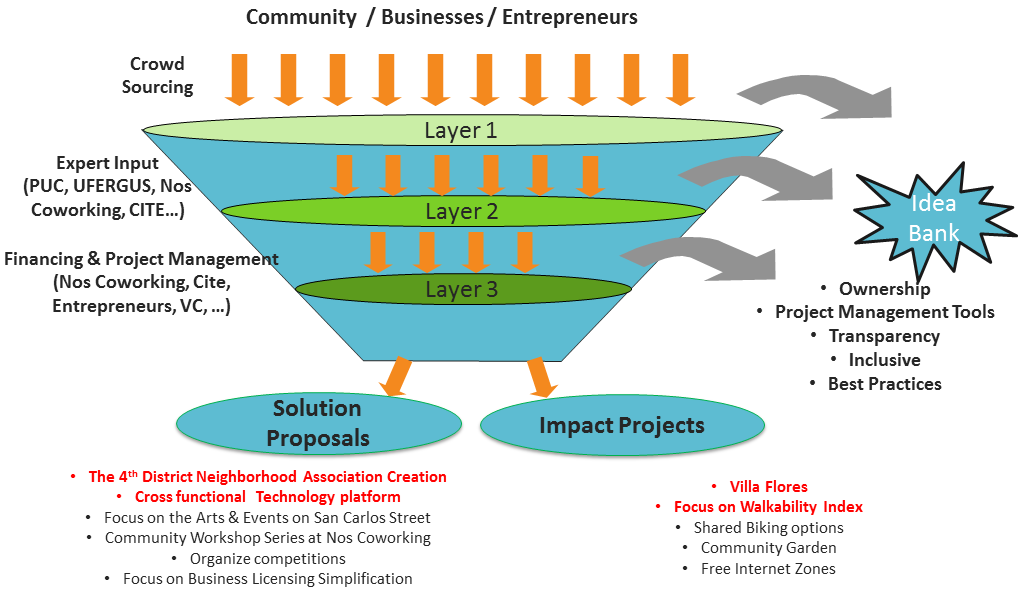 In all using these two major recommendations as a framework, and working through different ideas (already 31 ideas ‘crowd sourced’) have been identified; we believe that this could be a start to a movement that could provide the necessary impetus to the rehabilitation of the 4th district of Porto Alegre.

From the feedback that we had from our stakeholders, we strongly believe that this can be a much needed, and well documented input that could kick start the resurgence of the 4th district.

One thing that did strike me is the usage of Facebook in Brazil – for business, personal or even for plain old communications (messages).  Facebook flat-out is THE tool. Maybe it’s a cultural thing or maybe I have been exposed to a lot of SME’s and they prefer Facebook, or any other reason – whatever the reason maybe,I opted to put up the Facebook links in the previous paragraph instead of the website of Nos Coworking, cause for me it seemed that lots of happenings get picked up and acted upon, via Facebook in Brazil. (I recommend anyone travelling, for business or personal reasons to Brazil – to check out a few Facebook clicks on areas of interest. Helps a lot! … i.e. of course, if you know Portuguese).