Experiments and focus groups are no substitute for the real world, statistician and best-selling author Nate Silver said during his keynote at SAP TechEd 2013 in Las Vegas last month. Google and Apple know it, and so does SAP.

That’s why the company is testing a new way of selling its flagship in-memory platform: an updated Web site powered by hybris, one of SAP’s latest acquisitions. The beta version of SAP HANA Marketplace integrates hybris’ ability track customers across mobile, online and other channels with the user centricity of the SAP Community Network (SCN).

“What we have is a great storefront … and we’ve improved it by miles in this beta,” SAP’s Aiaz Kazi told diginomica co-founder Dennis Howlett last month. “We’ve taken a hard look at the UI and the buyer experience, and focused on that … and we’ve built a showcase for hybris as well.”

The SAP HANA Marketplace beta offers prospects another way of consulting a community of users before making a purchase. There’s also social media integration at the bottom of each page under Marketplace Live, which includes a Twitter stream and relevant blog posts.

“This integration is not only on the landing page, but at every single level,” Franklin Herbas of SAP Labs said during a demonstration at SAP TechEd in Las Vegas (see the video below). “If you were to take a look at one of the products, like Lumira for example, you’d see the product detail and, at the bottom, you’d see all the live feeds for Lumira, which link directly to the SCN.”

In addition to products, this integration works with industries, such as retail, as well as general topics, including SAP HANA. Both SAP TechEd 2013 in Las Vegas and Amsterdam featured the Web site in their show floor Info Zones.

“Impressive,” SAP Mentor Richard Hirsch said in a blog post on Monday. “This was the first example I’d seen of SAP really using its newly acquired e-commerce framework in a productive setting.” 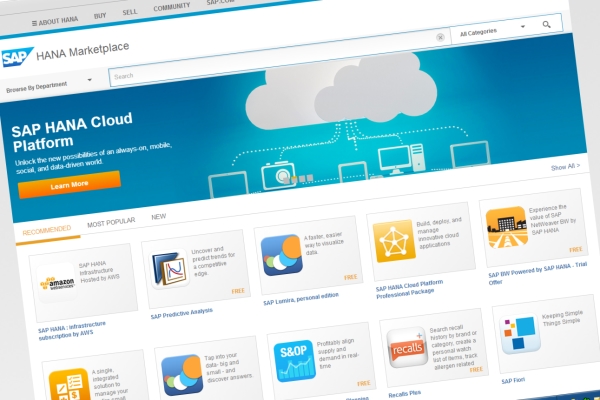