My life before and after the SAP TechEd App

It is Friday, November 8, and I am back in Germany from a great week in Amsterdam. Time to relax and to recall the past few days. For me the last week was yet another amazing experience not only in terms of knowledge exchange but also in terms of networking. One highlight for me was definitely the SAP TechEd event app.

For those of you, who haven’t heard about this app yet, here are some key facts. At this year’s SAP TechEd in Amsterdam, a mobile event app was offered to all conference attendees. Features included the whole event agenda, news about agenda updates, activity feed, maps and also a lot of fun and networking features such as earning badges (by checking into different booths, sessions or places), the leader board or sharing of pictures. In addition to that you were also able to link all your posts/ feeds to other social media channels (e.g. Twitter, Facebook). 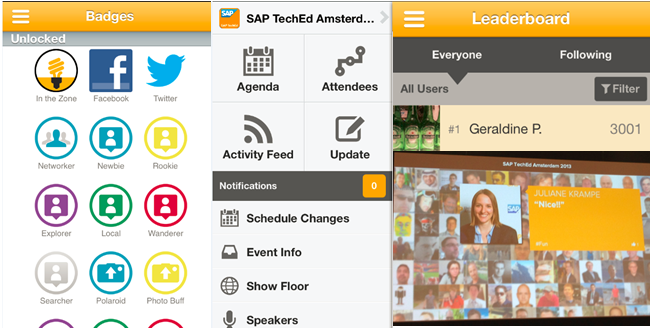 The Top 5 contributors and the latest feeds were always displayed on a big screen in the halls. Suddenly people were recognized in the hallways as they have become famous through their posts on the big screens. During the last days I suddenly really got into the psychology of the gamification approach. A real competition for climbing up the leaderboard began. People, including me ;-), went crazy and posted pictures and comments about their TechEd experience.

On Wednesday, the competition became fierce and the search for the competitors began. Through various feeds, the competitors tried to contact each other – and they succeeded and met. These social gatherings were a lot of fun and people from different companies and with different job profiles came together.

With TechEd being over, 16 badges and 661 points later I now have loads of new business contacts and feel kind of weird and restless. Something is missing and I think it takes some time until I am not continuously looking at my smartphone with the need to post something. I really became a Tweetomaniac throughout the last days ;-).

Congratulations to Geraldine who made it to #1 on the leadership board even though she had big competitors such as Roland and Jochen! In the end, one open question for me remains: Who is Yu Hu X.?

This same app was available for SAP TechED Las Vegas and it made it fun and alot easier to track sessions and whatnot.

Thanks for sharing Juliane. Your motivation and fun is contagious here. 🙂

It was a funny experience. Normally, you send a message (tweet) and it disappears into the 'big data'. People were now able to share their thoughts immediately. While being present at a session, a question/comment is posted in the app in, let's say the10th minute, and 30 seconds later somebody in the same session replies already either to help out or to confirm the same thought.

Thanks for sharing. Networking onsite and Twitter interaction make it so much more fun.

Thanks for sharing your experience. Its fantastic!

Keep sharing and motivating us!

Thanks for sharing your experience with us.India TechEd  on the way.

Thanks for sharing your experience