Then, less than a week before the start of SAP TechEd 2013 (@SAPTechEd) in Las Vegas, SAP tapped Goerke as its new chief information officer and head of its HANA Enterprise Cloud organization.

“I’m super excited about it,” Goerke said. “There are a lot of things to do, especially with the CIO role.”

That involves running SAP’s internal IT architecture and sharing those experiences with customers, partners and the influencer community. Goerke’s other duties include building up SAP’s external cloud business, as well as consolidating the entire company’s cloud delivery efforts — not just from SAP, but also from SuccessFactors, Ariba and Sybase.

“I was told there were big shoes to fill,” Goerke said on the exposition hall of SAP’s premier technical education conference for IT architects, administrators and developers. “I don’t want to run in his shoes — I want to run in my own shoes.”

At the same time, “the natural next step” is to showcase how SAP runs SAP in the cloud, Goerke stated. Many of SAP’s customers are moving to the cloud concurrently with SAP’s own IT environment, which is a tremendous opportunity for the company.

“The feedback so far, whenever you talk to customers, is tremendous,” Goerke said. “If we can take them with us step-by-step on how they can bring their own internal IT solutions stepwise into a cloud environment, this is a very powerful story.” 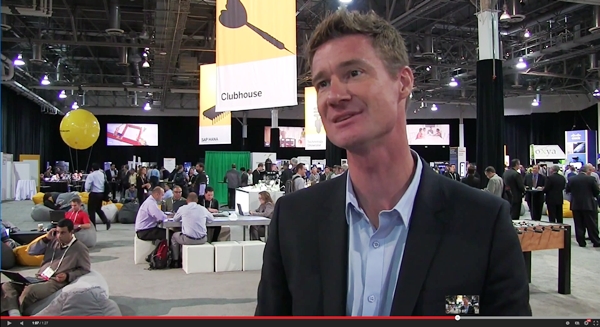