Moving HANA out of its comfort zone: Cloud Foundry and SAS

The TechEd in Amsterdam is almost over but there were two announcements made during the TechEd Keynote in Las Vegas that I keep remembering / trying to understand.  The key message at the TechEds focuses on HANA as a “platform” but the two announcements represented a different perspective for me – an evolution of HANA existing in the friendly SAP ecosystem and being deployed / used in more hostile “enemy territory”.

SAP’s increasing focus on start-ups (as evidenced by the SAP Startup Focus program) and external developers (as demonstrated by the presence of SAP at non-traditional developer events such as TechCrunch Disrupt) already demonstrate that SAP is aware of importance of looking outside the boundaries of the SAP ecosystem. Yet the two announcements in question display just how far SAP is willing / able to go to achieve these goals. 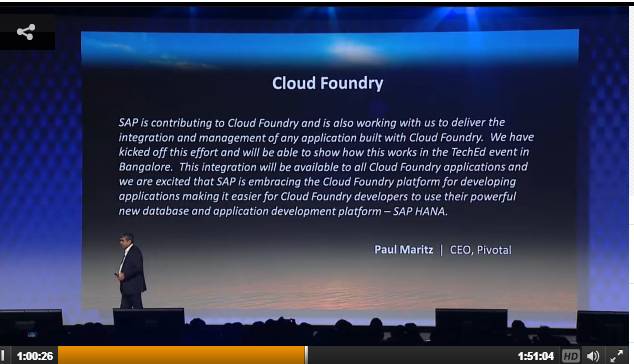 During the Keynote at the Teched in Las Vegas, there was an announcement about a cooperation with Cloud Foundry with the hint that there will be more details at the upcoming TechEd in Bangalore.  The slide above is the only publicly available details about the partnership.

Before diving into the fun stuff / speculations, let me provide a quick description about Cloud Foundry.

Cloud Foundry is an open platform as a service, providing a choice of clouds, developer frameworks and application services. Cloud Foundry makes it faster and easier to build, test, deploy and scale applications. It is an open source project and is available through a variety of private cloud distributions and public cloud instances. [SOURCE]

Cloud Foundry is also closely associated with Pivotal – a  spin-off from EMC and VMware.

To put it bluntly, Cloud Foundry is a competitor of the HANA Cloud Platform – this fact makes the announcement even more surprising.

Without more details, let’s attempt to analyze what the cooperation might contain based on the slide from the keynote.

The word “contributing” suggests that SAP will likely join the list of other contributors to the platform (which means signing the Corporate Contributor License Agreement (CLA)). SAP is already contributing to various other open source communities (for example, Eclipse) so by itself the participation in Cloud Foundry isn’t earth-shattering.

The more interesting aspect concerns exactly what SAP might contribute to Cloud Foundry.  The slide above provides a clue  – “integration” and “SAP HANA”. My assumption is that the cooperation will focus on the ability to use SAP HANA as a database within this environment.

The fact that productive HANA environments can soon be virtualized makes things even more interesting. VMware vSphere is mentioned specifically for such virtualization scenarios – vSphere can also be used for Cloud Foundry; thus, virtualized HANA instances would appear to be a good fit in this environment.

The other announcement of interest at the TechEd in Vegas concerned a partnership with SAS.

SAP AG (NYSE: SAP) and SAS have unveiled a strategic partnership that is expected to advance in-memory data analysis capabilities for businesses across industries. SAP and SAS will partner closely to create a joint technology and product roadmap designed to leverage the SAP HANA® platform and SAS analytics capabilities. By incorporating the in-memory SAP HANA platform into SAS applications and enabling SAS’ industry-proven advanced analytics algorithms to run on SAP HANA, decision makers will have the opportunity to leverage the value of real-time data analysis within their existing SAS and SAP HANA environments.

This partnership is surprising, because SAS and SAP are competitors in a variety of fields.

In a similar fashion as in the Cloud Foundry agreement, HANA is being placed in a competitor’s environment.

Although the focus of the recent TechEds has been on platform, both announcements mentioned in this blog are more focused on demonstrating that HANA is indeed a mature database.  Everyone knows that HANA is destined to be THE database for SAP products but to see it move into enemy territory and be successful there is even more intriguing and is evidence that HANA adoption is moving into a new broader phase.

Note: Although I’m focusing on the database aspects of the announcements in question, there are other interesting angles as well that motivated SAP to participate in both deals. The Cloud Foundry announcement is another example of SAP placing HANA into a different developer ecosystem – distinct from the often incestuous SAP ecosystem – in an attempt to increase its adoption. The use of SAS’ advanced analytics algorithms within HANA supplements existing domain-specific functionality and will enhance its appeal to data scientists involved in Big Data scenarios.

Another interesting blog! Thanks for sharing your view. In general, I agree with you and SAP is always looking for opportunities to reach out to developers and push the adoption of the HANA platform beyond the existing ecosystem. HCP is clearly pioneering here...

From what I heard on the showfloor at TechEd developer outreach and experience will get much more momentum. With the Mentors and extended wolfpack, distinguished engineers and community members the word will spread and SAP Executives have left no doubt that HCP is THE designated and strategic development platform for extension scenarios and new high-performance new solutions. The first wave of adoption has been focusing on our current ecosystem (= customer loyalty), but the tracks have been set. Some passionate people are pushing topics like platform, developers, marketplace and startup & partner programs. University Alliance and openSAP focus on new talent and next gen...

I believe we got what it takes...