When LEGO Group set out to snap a robust mobile strategy into place, the company wasn’t exactly ahead of the pack, according to LEGO’s Jan Thomas Nygaard who shared his company’s mobile pilot experiences during a session here at SAP TechEd Amsterdam. 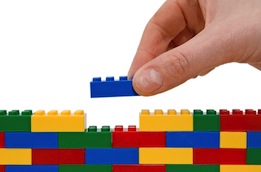 “We were in the stone age regarding mobility at LEGO Group,” said Nygaard. “We wanted to mobilize employees, and quickly realized it was going to be a large investment. It seemed complex and the maturity of certain platforms weren’t as far along as we like them to be. We had some concerns.”

Nygaard said LEGO Group also had many doubts about internal competencies, fearing the company would build itself into a mobile corner it couldn’t get out of if the market changed. As a result, the company decided to test the waters with a pilot (currently in its sixth month) to see how far they could get with in-house resources. “This way, we could learn from our mistakes while enabling mobile app skills across our service desk, lines of business and IT,” said Nygaard. “We want to explore different technologies, limit the scope of project as much as possible and develop a single destination to access all apps we wanted to use.”

Enter SAP NetWeaver Portal’s mobile capabilities, which LEGO Group is using as a proof-of-concept for an Enterprise AppStore. Here are the app development scenarios the company is working on:

Receipt capture for Travel Expense – While SAP has a mobile app for Travel Expense capture, Nygaard said it requires the SAP mobile platform that they don’t have. “We wanted to use native features like the ability to compress images, and offline use so we don’t have to rely on roaming charges when employees are traveling,” he said.

Absence registration – Most employees tend to forget to register vacation days which means LEGO loses out. A new app now requires LEGO employees to indicate when they are sick with clear visibility into remaining vacation and sick days.

Outcome of pilot to date:

One productive app, Receipt Capture is live. “It’s fair to say the first one is the hardest to get live, whole process takes time,” said Nygaard. “We have some design guidelines that retain a similar look and feel to help streamline the app development process for the next batch of apps. Developing a mobile strategy gives us a better idea of when we need to invest in a platform, we can be more clear instead of a lot of companies telling us what to do.”

Next steps? More apps using SAP Fiori, according to Nygaard.

#SAPTechEd Amsterdam Goes Back to the Future with Retro Gaming

Ferrero Germany: “We try to use the latest release of SAP, always”

The winner of the SAP HANA Cloud Applications Challenge is…

Customers at the Heart of Nespresso’s mCommerce Deployment