A generic date hierarchy on 0CALMONTH

The post describes a hierarchy on a monthly base. You can of course adapt it for daily, weekly or yearly hierarchies.

For some reports, it’s necessary that analysts can decide for themselves which time slices they want in a query view.

As you can see, there are thousands of possibilities and combinations, depending on the number of users as well as the specific reporting requirements.

Show me sales for the last three month:

Normally, there are two ways to meet such reporting requirements:

Would it not be better if the IT department implements only one query and the user could control which time slices are needed? It would be great and the user would love it. Trust me on this one.

The idea behind all this is a generic date hierarchy which is updated each month:

For the requirements above:

The hierarchy nodes selection has to be done only once and can be saved as a workbook or query view. If the user refreshes the report next month, he will get the correct data in regard to the current month and the selected time slices.

New classes based on class ZCL_GENERIC_HIERARCHY are needed (described in post generic-hierarchies-in-sap-bw): 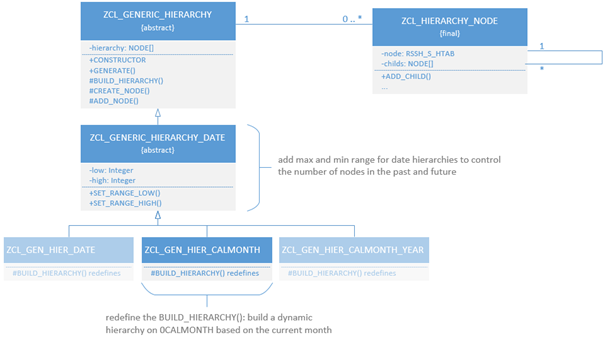 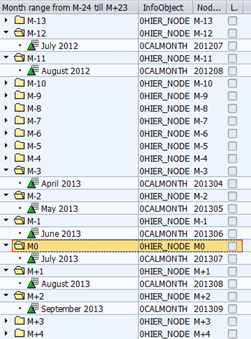 Hierarchy example generated at the beginning of July 2013

At first, we need to redefine the inherited method BUILD_HIERARCHY() with our own coding. As an example, I will only describe the coding for node M0:

Now we have to instantiate a new hierarchy object on InfoObject 0CALMONTH:

If you call the method …->generate( ). a SAP hierarchy will be created based on the custom coding in the redefined BUILD_HIERARCHY() method.

Generic hierarchy for different time slices (will be generated each month)