I’ve enjoyed reading the BIFs of SCN regulars, so I might as well chuck my own into the mix. Thanks to Susan Keohan for passing the ball to me, and to Moshe Naveh who started it rolling in the first place.

I was born & bred in Brisbane (Australia), and that’s also where I live. Brisbane is a sleepy city about halfway between Sydney and The Great Barrier Reef.

When I’m overseas, I hear a lot of myths about Australia. One is that we have loads of dangerous snakes, spiders, and sharks. Untrue! OK, maybe a little true. I’ve lived here forever and have never seen any dangerous critters, except perhaps for the occasional redback spider or drunk driver.

In fact the only time I was ever attacked by a snake was in Sweden, of all places. But you never see any bad press for the huggorm! 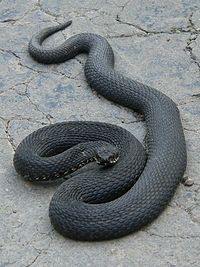 The dreaded huggorm (courtesy of Wikipedia)

Another myth is that we have cute & cuddly koalas sitting in trees, refusing to drink water. This is untrue on two counts. I once encountered a koala in my backyard who lunged at me with his vicious bear claws. And here – as an SCN exclusive – is a koala sneaking a drink of water, when he thought there were no scientists around. 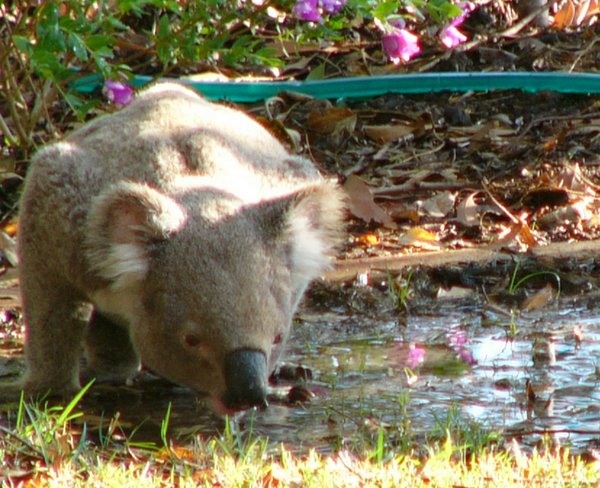 It’s been an interesting life so far. I’m an identical twin (with SCN ex-MotM Rick Bakker), which has provided plenty of laughs. We attended high school in Amsterdam. This gave me the priceless opportunity to learn some Dutch, French and German. All of these have helped enormously in my SAP career. I still speak them occasionally, but with an hilarious Australian accent. University (or ‘college’) was back in Australia where – completely free of charge – I could study whatever I wanted and for as long as I wanted (thank you again, Australian government). I ended up completing a PhD in Computer Science and Psychology, which led to a job in Tsukuba Science City (Japan), tinkering with humanoid robots. The idea was to make robots learn independently, by letting them watch and imitate humans. Then we realized how dangerous this was and quietly closed it down. After this I spent 18 months working for Shell in Gabon, Central Africa. If I had to sum up my African experience in one word it would be: ‘insects’. However, this was the place where Rick introduced me to SAP. Yes, it was love at first sight.

The famous Jocelyn Dart taught me ABAP for 5 straight weeks in Sydney in 1998. I have so much respect for her. PwC then sent me straight onto a client site (an explosives factory outside of Brisbane), and that’s pretty much all I’ve done since.

Around 2004 I branched out into SAP workflow and a few years later returned the favour to Rick by dragging him into it (he was a frustrated Oracle DBA). We both work as SAP workflow contractors now.

Nowadays I hang out in the SCN Workflow and ABAP Development spaces. I tend to post blogs with lots of pictures.

What is the most fun thing you ever experienced?

We once did a trip to North Korea. We wrote a silly travelogue about it that – incredibly – was translated and published in a serious South Korean news magazine.

Which superhero best describes you?

I don’t know anything about super heroes. That’s a geek thing.

If you could have one superpower, which would you choose?

What would you be doing now, if you weren’t in IT?

I’m a trivia buff, so that would have to be: trivia quizmaster in a pub.

In closing I’d like to pass the BIF baton to two notorious Australian lurkers, Rick Bakker and Adrian Vaughan.

My question for them is: If you could be reincarnated as an ABAP keyword, which one would it be?

Glad to read your BIF.Nice to see your twin brother's pic. Good looking.

I didn't know you were an identical twin

Lucky you to be trained by Jocelyn Dart

I have only been to Australia once and I had a great time - I miss the long tall coffees.

Thanks Tammy. We weren't 100% about being identical, but a swab test done on the internet confirmed it (or did it..?).

Try an iced coffee next time you're here!

Thanks. I enjoyed your BIF as well!

Thanks a lot for joining BIF!:)

Your BIF sure makes me want to visit Australia and the great Aussies I've worked back in the days in Kirkwood California.

BTW, I hope that Rick Bakker and Adrian Vaughan  are aware that they got tagged:)

Finally we get a little more Paul Bakker!  (BTW, I did love your food recommendations for those attending #sapteched in AMS).  I agree with Tammy - you are indeed fortunate to have been trained by Jocelyn Dart - I wish I could say the same.

You seem to have a sly sense of humor - which is always enjoyable.

Plus, you are an SAP Workflow evangelist, who even dragged your brother into our world.  Well done.

I have a feeling we will be corresponding (at least) for a while.  Someday maybe even a meeting in real life!

PS: Good on calling out those lurkers.  Also, are you aware of the BIF party?

Thanks Sue. I'm not a full-time evangelist like you, but I do like to get out and beat the workflow drum every now and again. It's such a great product!

Hey Paul - at long last a BIF entry - great to have you joining the BIF-ers!

Love the blogs from both our fabulous Bakker twins and can't wait to see your next installment.

I'd forgotten you were one of those on the PwC academy - if you survived that you can survive anything! (or at least that's how it felt on the SAP Education end too 😉 )

I always know when I see you onsite that there is a customer in a very safe pair of hands... 🙂

But come on now... you've forgotten the redback spider, the funnel web spider, a crocodile or two, the crown of thorns, the box jellyfish... It's a wonder any of us survives at all out here!  How many places in the world have industrial sized jugs of vinegar (true!) alongside the lifesaver ring at the beach just to deal with the nasties?!

And yes we need to hear from Rick Bakker and Adrian Vaughn!

Adrian there are photos doing the rounds of you belting out rock anthems at SAP TechEd Las Vegas like a young Jimmy Barnes, and I hear that plans are already afoot to co-opt you to the SAP Mentor Band for next year!

Thanks Jocelyn.That 5-week course almost killed me, but it made me stronger. 😎

Adrian should definitely be in the next TechEd band. He is a master of the six string, and his vocal on 'You Sexy Thing' is the stuff of legend!.

Great blog Paul and wonderful to get to know you a bit!

You did however have me blushing 😳 since I fall into the category of those scared of the 3 you mentioned... you almost had me rethinking it too until Jocelyn started in 😉 now i'll never visit my family in Melbourne! 😆

I think Melbourne is a dangerous place.. oh, those trams!

Crocodiles? Paul went swimming with them in Darwin. It's a new tourist attraction. I'm not kidding! It's like swimming with dolphins - but more exciting.

Please, everyone, come visit Australia, our ailing tourism industry needs it. Don't be scared off by these alarming stories of a high dollar.

Great blog! Let me grin the whole time through it. Especially the super power question, even though I have to admit I was confused at first and read the question and your answer to it three times to get it. 😀

Loved the Australian Mythbuster stuff, too. ^^ Australia is on my list of countries to visit and it's not the dangerous wildlife, that's keeping me away, but the long, long, loooong way to get there from Germany. -.-

BTW: The robot reminded me of Short Circuit. *g*

BTW I read your blog a few days ago and really liked it - you have a mysterious 'Girl With the Dragon Tattoo' vibe going with the red hair and the mysterious pic..

Anyway, it's great to see more Ossi's on SCN (as opposed to all the Aussies).

Let me apologize right now for my sad attempts at humour.

And I'm happy to say that I am a lot more people friendly and social than Lisbeth. 😆 But the comparison is pretty cool, so THANK YOU! 😀

Well Said Steffi! He He He 😆

I liked this blog very much! Fantastic blog!

I appreciate. Keep sharing more information and motivate others in SCN.

Bedankt/Danke/Merci for your kind words.

You have a brillant history. 🙂

No, I didn't build it.. I worked more on the brain/learning side (neural networks etc).

But this 'bot was one of my favorites because he would walk up to me every morning and give a cheery 'ohayou gozaimasu' (good morning), delivered in an American accent 🙂

Great Blog. Its very nice to know about you and Australia.

nice to know about you

I am new to SCN, and new to the BIF concept.

I really enjoyed your BIF, your dry sense of humour, and your top pieces of advice for Tourists.

Looking forward to your next Blog.

Please let me know if you want to join BIF:)

Yes, I would be happy to contribute, and to join the community, Moshe.

Welcome aboard Michael! ... keen to see your BIF.

You were tagged! Looking forward to reading your BIF:)

Nice reading your BIF, also interesting to read that Robots could learn from humans.

Well who amongst you both (PB, RB) is considered elder 🙂

Nice to see you  Paul Bakker i