The rest of the story: what else I learned at #SAPTechEd

Last week I published a blog What I learned in the #Security track at #SAP TechEd 2013 about what I learned at SAP TechEd in Las Vegas. However, that was nowhere near all my learning for the week. Every encounter at TechEd is an opportunity for learning, so here are more of the highlights.

On the flight to Las Vegas I finished reading The Signal and the Noise by the guest keynote speaker Nate Silver, so I came to the keynote with a pretty good idea of what to expect and his key themes. Even so, I enjoyed his reminder that the news media have to have a headline, so sometimes it is the outlier noise that makes the headlines and not the real signal, and big data can result in big biases when fragmented sets of facts are presented to highly fragmented audiences.

Others have already commented on Vishal Sikka’s keynote, so I’ll just say that I did enjoy Sam Yen’s demo of creating a non-monetary awards program on the SAP HANA cloud platform. Pretty slick stuff.

I was fortunate to be able to attend the Fail Faire workshop Wednesday evening, and it did not disappoint. Marilyn Pratt assembled an outstanding group of panelists including Joan Buccigrossi, Thorsten Franz, David Parker, and Debbie Schmidt. Led by the discussion facilitator Marcia Walker, they shared personal experiences on the subject of failure, then the attendees worked through group exercises. Some of the messages that resonated with me were:

§  What do I want to preserve?

Another learning opportunity for me was hosting a session of SAP TechEd Live, on the impact of gamification on the SAP Community Network. My panelists were Laure Cetin, Community Reputation Manager for SAP; Audrey Stevenson, Gamification consultant for SCN; and Simon Kemp, a fellow SAP Mentor and active SCN member.  Photo courtesy of Brian Bernard 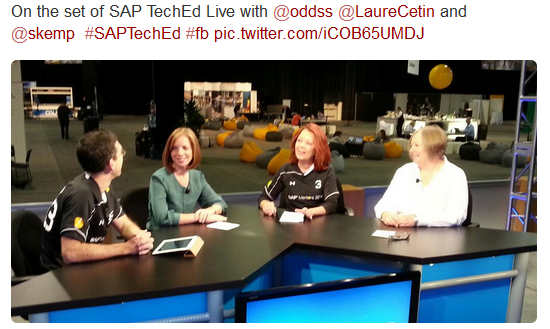 If you missed the TechEd Live sessions, you are in luck, as the recordings are posted online. Our session was a quick 9 minutes, and I encourage all SCN members who wonder about what’s in it for me with all this gamification stuff, check it out.

Last but certainly not least were the Expert Networking sessions I had the pleasure of facilitating. Photo courtesy of Karin  Tillotson 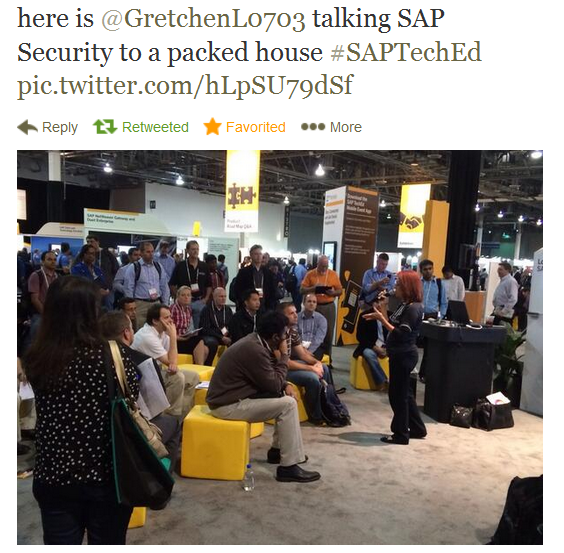 At one of the sessions, I polled those present to see where their organization was in the GRC implementation path. Results were all over the map, from haven’t even started thinking about it yet, to already live and thinking about next steps. I must say I was bit surprised at learning that the most common response was, still thinking about/ making plans for a GRC implementation. I suppose I expected most customers would already be well into their GRC projects, but if my group was any indicator, quite a few seem to be holding back and “waiting for it to get out of Beta,” as one person has told me, a bit tongue-in-cheek, perhaps, but there is an element of truth to it and perhaps also a warning shot fired over the bow to SAP.   It still disappoints me that SAP expects customers planning a GRC implementation to attend a third-party conference.  Hardly a day goes by that there isn’t a question posted on the GRC discussion forum that makes me think, yes, that would be a good session at TechEd.

Another discussion we had at my Expert Networking sessions concerned pain points; those that resonated most with the attendees were:

§  Inadequate unit testing of security roles at their organization

§  Challenges with GRC/ other solution implementations

Perhaps some of these topics could be covered at a future conference. Thanks to everyone who participated in Expert Networking sessions. Those of you with your TechEd experience still ahead of you, don’t miss out on these great informal learning opportunities. While the hands-on and lecture sessions are great, I hope I convinced you that there is a lot more to learn at TechEd.

Thank you, Gretchen, for covering what I missed - the Fail Faire, the TechEd Live session and the expert networking lounge.

I greatly appreciate the time and effort you put into it.

Well deserved big crowd for you at your networking lounge.

The messages that resonated with you have connected with me as well. 🙂

Thanks for sharing your experience