Tammy did already a great job outlining the Design Studio presentations (World Premiere of Design Studio 1.2 – Sharing the Knowledge from SAP TechEd) so I will not repeat that and just mention the things I found particularly interesting .

First of all version 1.2 is announced being GA on the 19th of November. I will be sure to be near the download section on that date!. 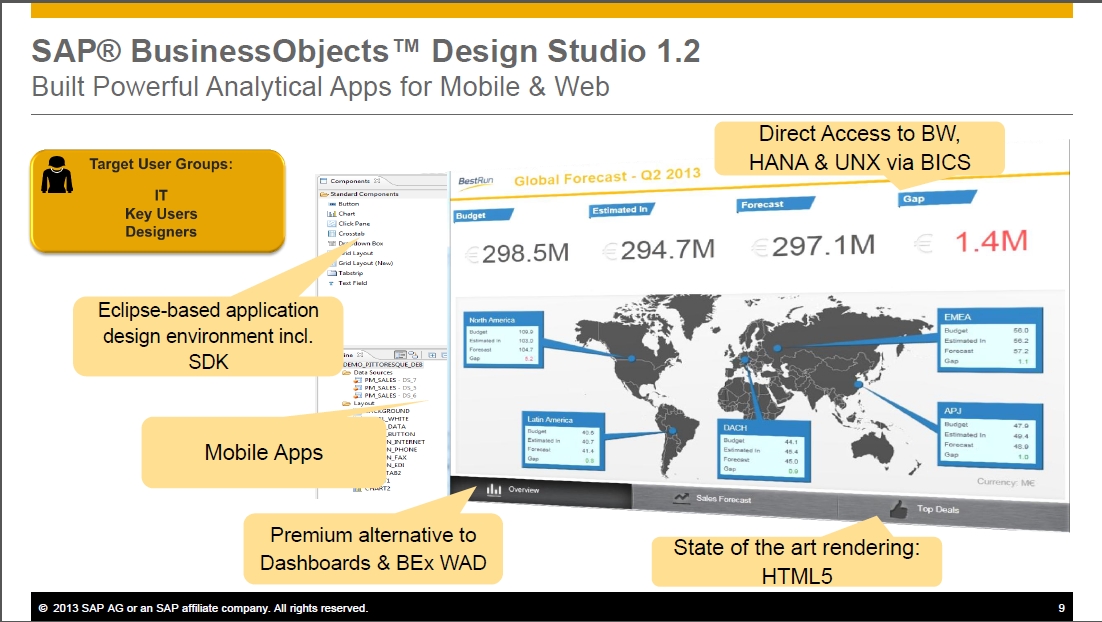 There are a lot of new things in version 1.2

As you can see there is a lot happening. And more is coming in version 1.3. In a discussion we talked about the development of design studio. What happened is that SAP first showed a basic version (1.0) that didn’t have a lot of functionality but was stable. Based on that stability now more and more functionality and visualization options are being added.

Finally Design Studio was now officially announced as the premium alternative to Web application Designer and SAP Dashboard. Basically the last two go into maintenance mode while Design Studio continues to be improved. With 1.2 I think It is in number of functionalities already quite close to SAP Dashboard and in next year’s teched it will have caught up completely. With the added bonus of stability and future proof usage of technology it’s the way to go.

at the end of the afternoon i also saw a demo made by S. van Middelkoop

They built an application that was able to write data back into HANA using the XS layer of HANA. With this capability they made an what-if scenario application where the scenario numbers were written to hana and after the query refresh the data was shown using the scenario input. they now used the opennewwindow method from the application component, but in 1.2 with the SDK they will replace that with a button that does a direct call.

Thanks for mentioning the session (and attending it)! Was nice to see you and Xavier in person!

As per your article, you said the SAP Business Objects Design Studio is announced to be GA on November 19th but I do not see the application available in service marketplace. Do you have updated date for the GA?

Latest I've heard is the 29th of November.

29th is also the latest i heard. But that informations also comes from slides, so take it with a grain of salt as the 19th also also was a bit optimistic 🙂