#SAPTechEd Amsterdam Goes Back to the Future with Retro Gaming

SAPTechEd officially kicked off today at the RAI Convention Center in Amsterdam and while I am not surprised by the cloudy conditions (both inside and out), I am taken aback by the old-school gaming consoles that occupy a good chunk of space in the Clubhouse area. Attendees are having a blast re-visiting Nintendo’s first (1983) console with the original Mario Bros., the Commodore 64’s “Bubble Bobble” and even the Amiga 500’s “Sensible Soccer.” Duke Nukem 3D (a personal favorite) is also here. I scored an interview with Canan and Detlef Hastik of Museum of Electronic Games and Art to learn more about their retro gaming mission at TechEd. 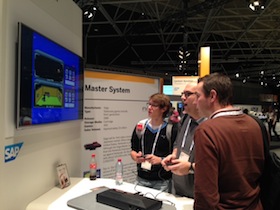 First and foremost, the games on display are to entertain, according to Canan but there is a lot of business value in bringing people together to beat a few levels, share a few laughs and reminisce about the good old days.

“While a lot of these retro games are very simple to play, there is still a lot of interaction and good storytelling,” said Canan. “It’s important for IT developers to also tell stories with images and be reminded of the limitations game developers used to work in.”

Detlef Hastik said technology is changing so fast we sometimes forget about good concepts. The concept for SAP HANA, for instance, was actually discovered in the 1980’s but it’s just taking off now. “So it’s sometimes good to re-use concepts,” said Detlef. “Thanks to the cloud, we have unlimited specs and space to play with, which is amazing. But it is also good to re-connect with our roots and core development concepts. Some of the best concepts were born from working within severe limitations.”

Can retro gaming really fire up the flames of innovation? Sound off in the comments.