SAP TechEd in a Single Conversation

And I’ve only mentioned approximately 1% of the people I actually interacted with – it was a pretty breakneck pace most of the week.

But I think one conversation I had really encapsulated the event for me, and the reason why I never tie of going to shows like SAP TechEd or the ASUG SAP BusinessObjects User Conference. Basically, I ran into someone who I hadn’t seen in years,  Sharone Slakman. Why did this conversation in front of the burger place stand out? 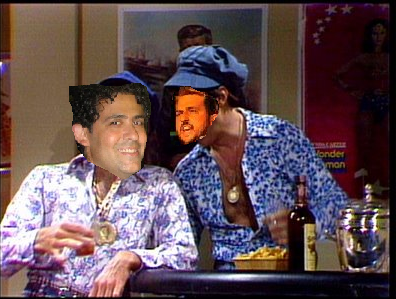 In short, this was the sort of personally and professionally rewarding 5 minute conversation that can only happen at these sorts of events, which is exactly what keeps us all coming back.

Hope to catch up with you all next year…

For one part of '2 Wild and Crazy Guys' you sure have summed up TechEd well.  It doesn't always have to be that one conversation, but when it happens, it's pure gold.

Besides you have mad skillz with photoshop apparently.

I am the Microsoft Paint Master, Susan Keohan . See?

Congratulations on the #CanuckHunt win..!

Glad you got your Prize-Pack delivery OK.

Mark Richardson, I'm not gonna lie - I was very relieved that your mayor didn't help you pack it. Then again, maybe I'd better go recheck the "smoked salmon."

Thanks - I feel like we hardly said hello. Definitely need to find more opportunities to catch up and enjoy a spirited (whiskey-fueled) debate, especially now that I've learned that you are on a constant chase for free parenting advice. 😀

Looking forward to it Thorsten Franz - I especially appreciate any advice you could provide for situations which you've never personally had to deal with. I find that unbiased view, unencumbered with the weight of experience, to be the most valuable.

Jamie , I wouldn't even think of delivering less than the whole package, including of course value judgements about the way you raise your children and about everyone in your family. You know you can always come to me for that!

It was great catching up with you too "James" 🙂 !  It wouldn't be a conference without #thejamieoswaldexperience .

Always a pleasure Karin  Tillotson. It just wouldn't be an event without the constant looming threat of having to buy you a drink out there.