Transitioning to the Prototype Step

So lots of ideas to address the problem space – some just out there thinking to get the thought process going (or possibly score some Google Glasses), but in order to move forward, we need to consolidate the ideas, vote and come up with a recommended way forward.  So we voted and all the votes came in with 100% agreement that we’re going to take the following ideas/points forward (a variation of at least):

Plus the non-functional requirements:

I’ve also thrown in a variation of the Game idea, but you’ll see what I mean below. It’s going to be part of Release 2* but thought I would highlight the possibilities a bit further and I quite like this idea.

* We reserve the right to never actually go ahead and deliver a 2nd release with this blog series – Written and endorsed by Matt Harding 4th of November, 2013.

Key to the above is it’s the more obvious solutions that fit a Fiori like solution achievable within a blog series without over committing myself.

So we’re going to be in this phase for a little while but take a couple of passes over it. Firstly we’ll start with a low-resolution prototype which consists of poorly taken photos of a small whiteboard with very roughly drawn screens which hopefully you can experience to a degree to get an idea of what would work well for you or maybe tell me you don’t care about a certain function which I can remove (e.g. After you look at the screen shots, consider whether the option to search by lots of photos and search by names is really necessary since it’s just a different view of the same thing, so maybe we don’t need that complexity???).

To make things even more low-resolution, it’s a generic device (not sure whether this is a Tablet or Mobile for example and it’s definitely not an Apple, Android or Windows. My kids helped me design the button which somehow looks like the deathly hallows symbol, but we’ll ignore that as that would be a copyright issue).

Side note: if you want to entertain your kids during a blackout, get a whiteboard, and get them to help you design a mobile screen. Hence why my first screen looks like a face at the moment, which is unlikely to make it to the high-resolution prototype, but you never know – user feedback could strongly desire this look.

Back on topic: So rather than tell you how this all hangs together, I’m going to let you “experience” the application yourself (as much as is possible with just hand drawn screen shots). If something is not obvious just from screen shots, point it out, and I’ll fill in the gaps, but that will also inform us that the screens need rework.

Caveat – If I ever do low-fidelity screen shots for you as a client, I promise to use a ruler and write text much neater. I probably still won’t use perfect mock-up tools, as the point of low-fidelity is to let people fill in the gaps more than if you had a perfect looking Apple or Android screen (makes them think more). One additional thought though: This is the one scenario where I really think a tablet with a fine-point pen would be excellent!

So I’m going to post this and wait more than 24 hours before I start work on the high fidelity prototype; so please provide any thoughts in the meantime. I’m most likely only going to proceed with the search for my first release, but I do really like the idea of the game if it was available in a company to play during my spare time (or when starting in a new company). And please note, that I really won’t be offended if you don’t like the nose (my daughter drew that in). 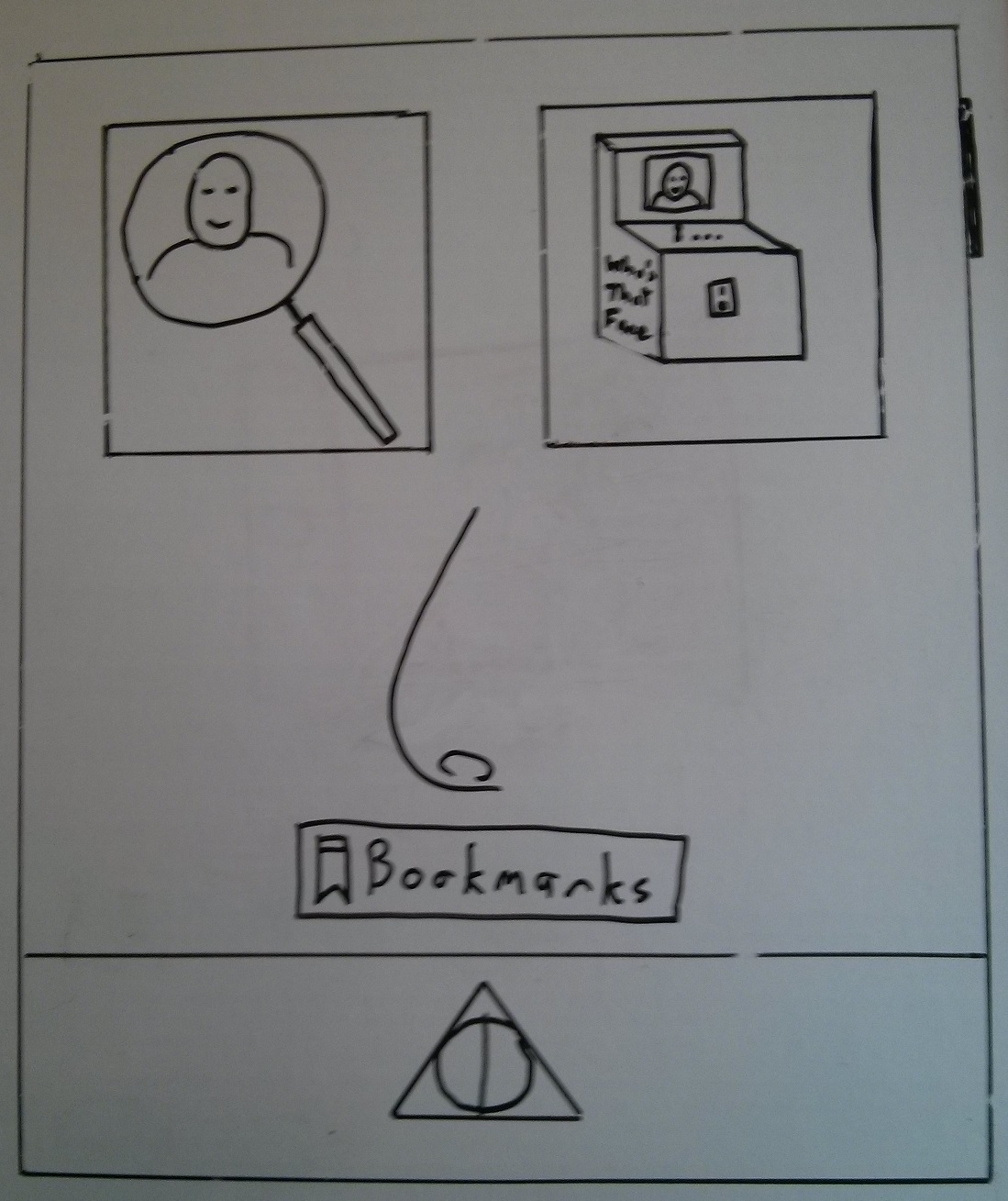 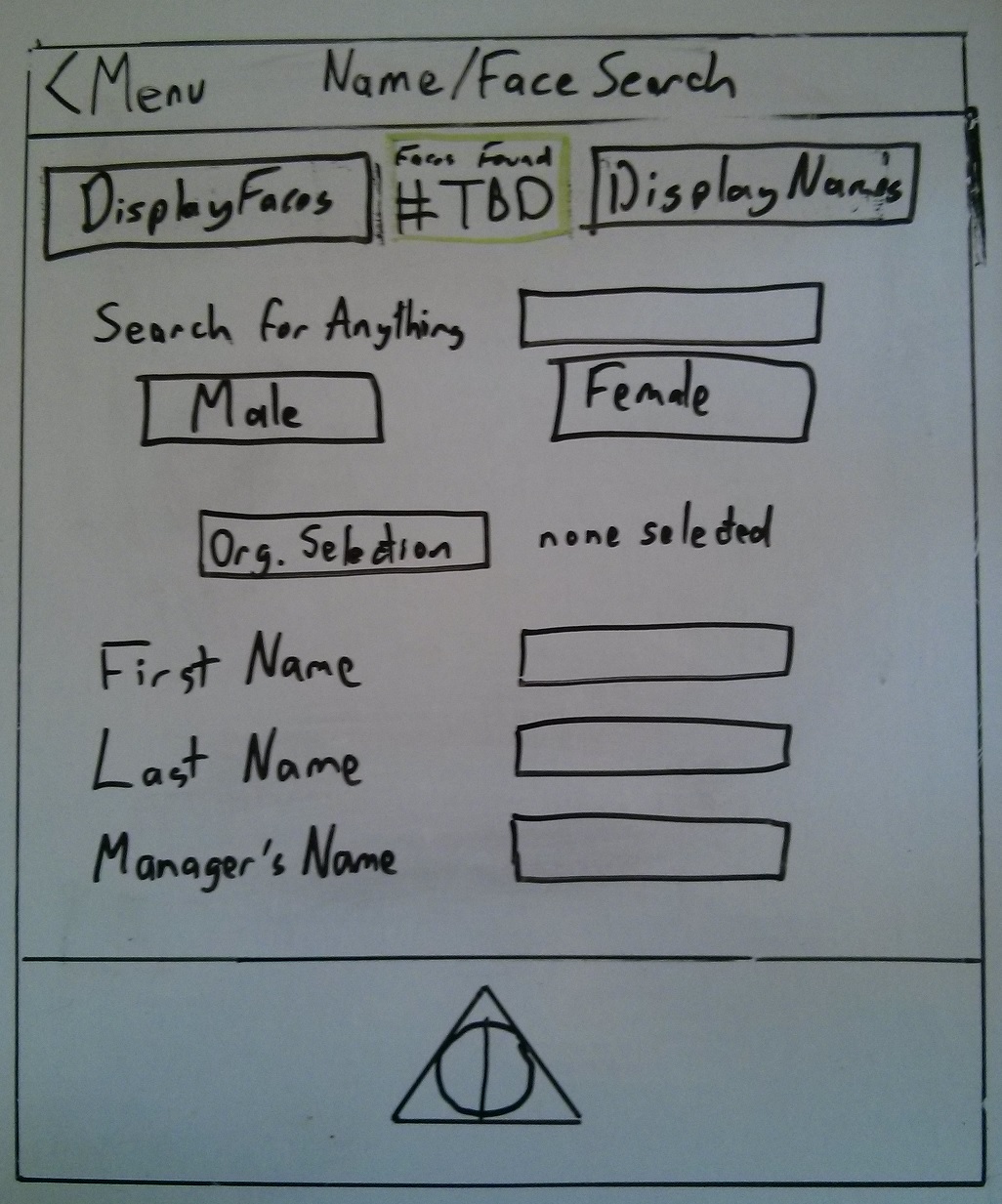 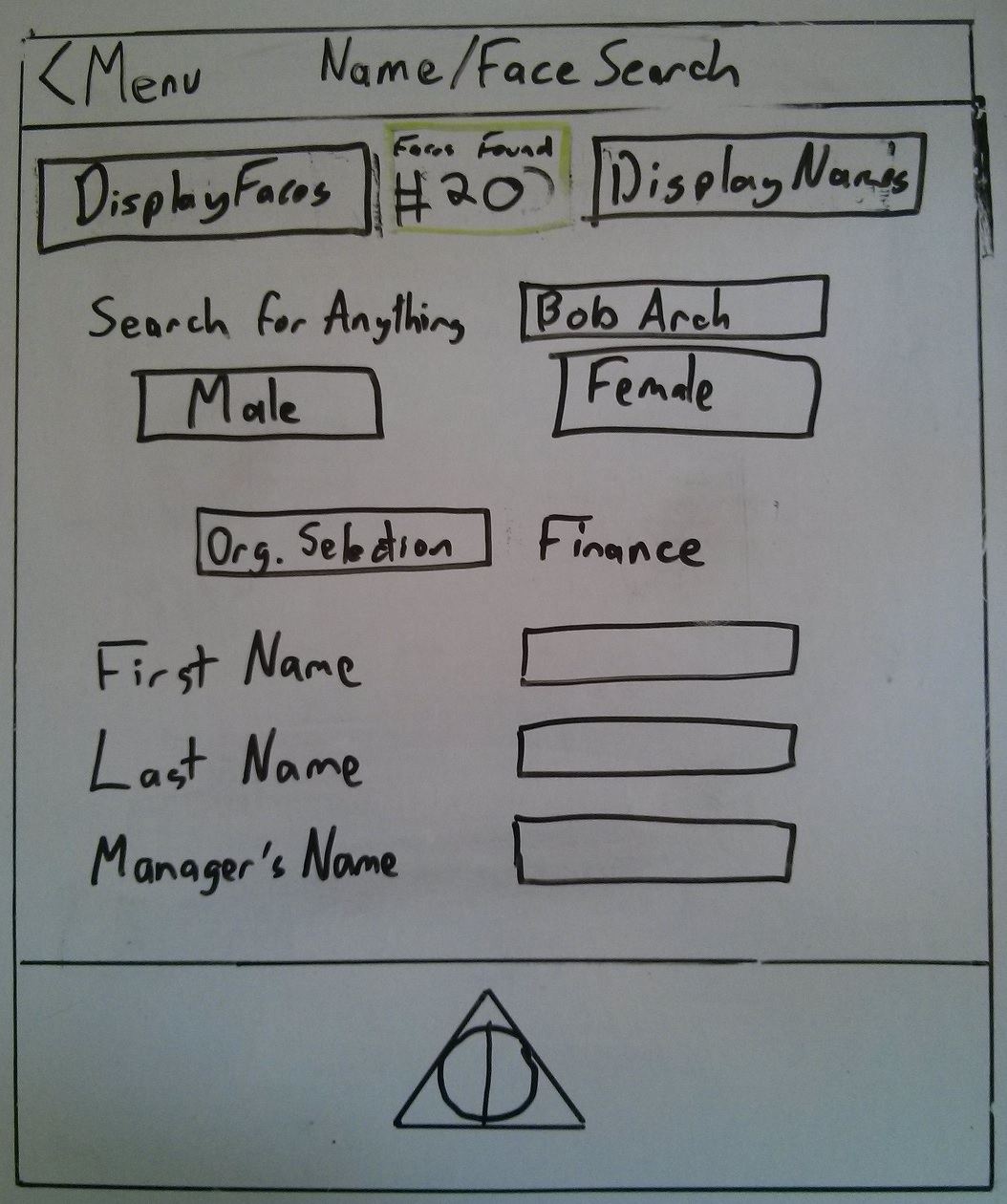 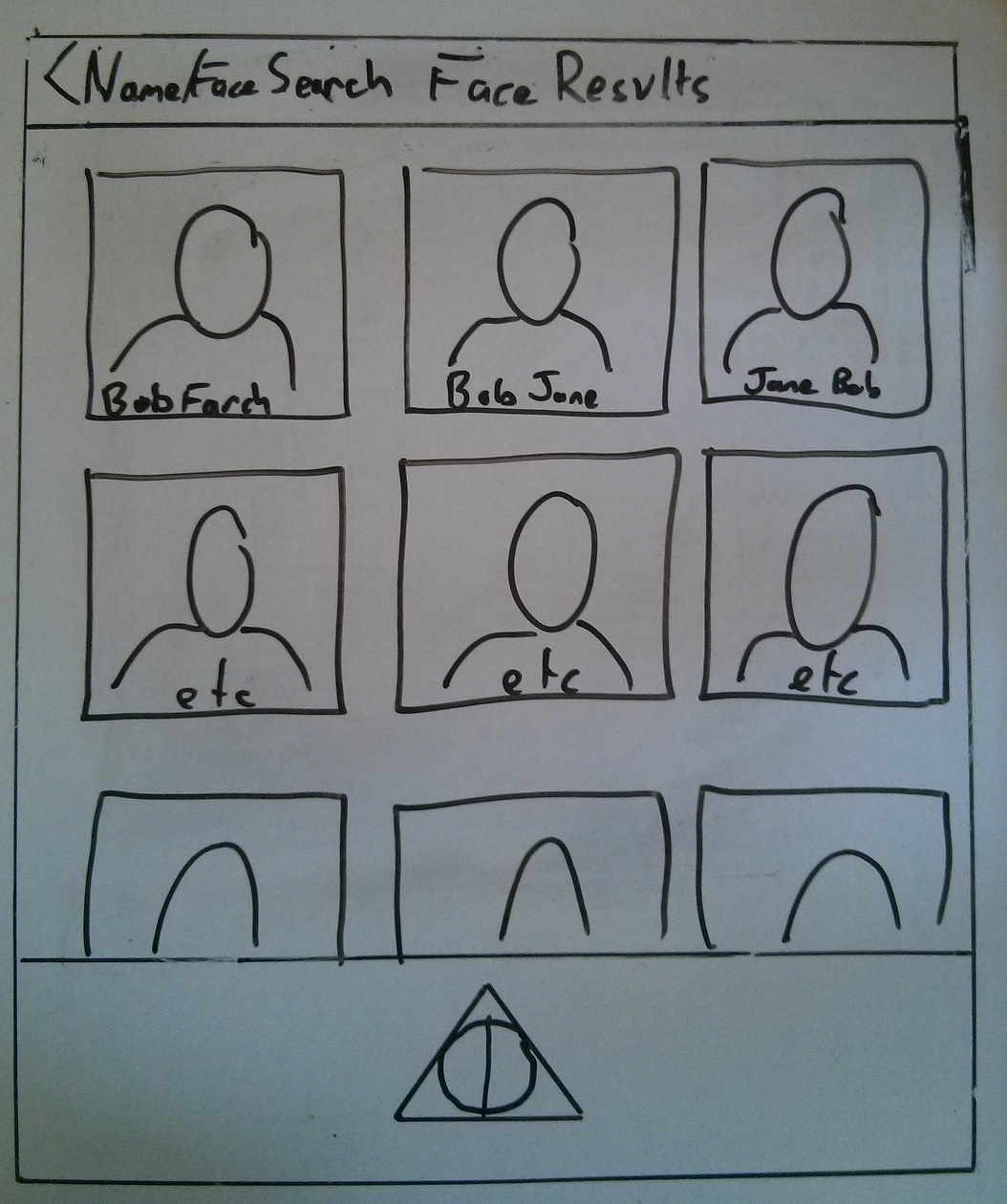 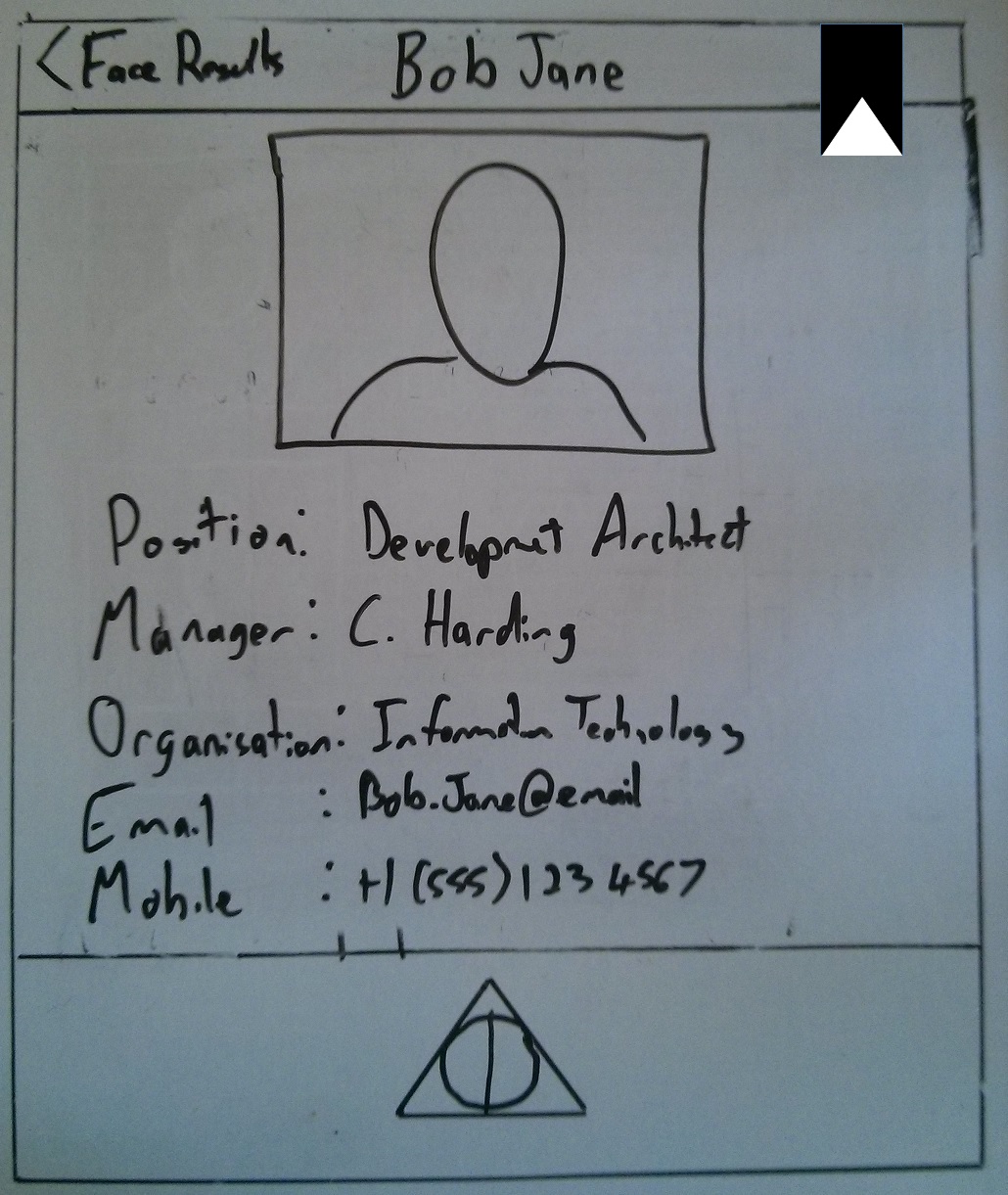 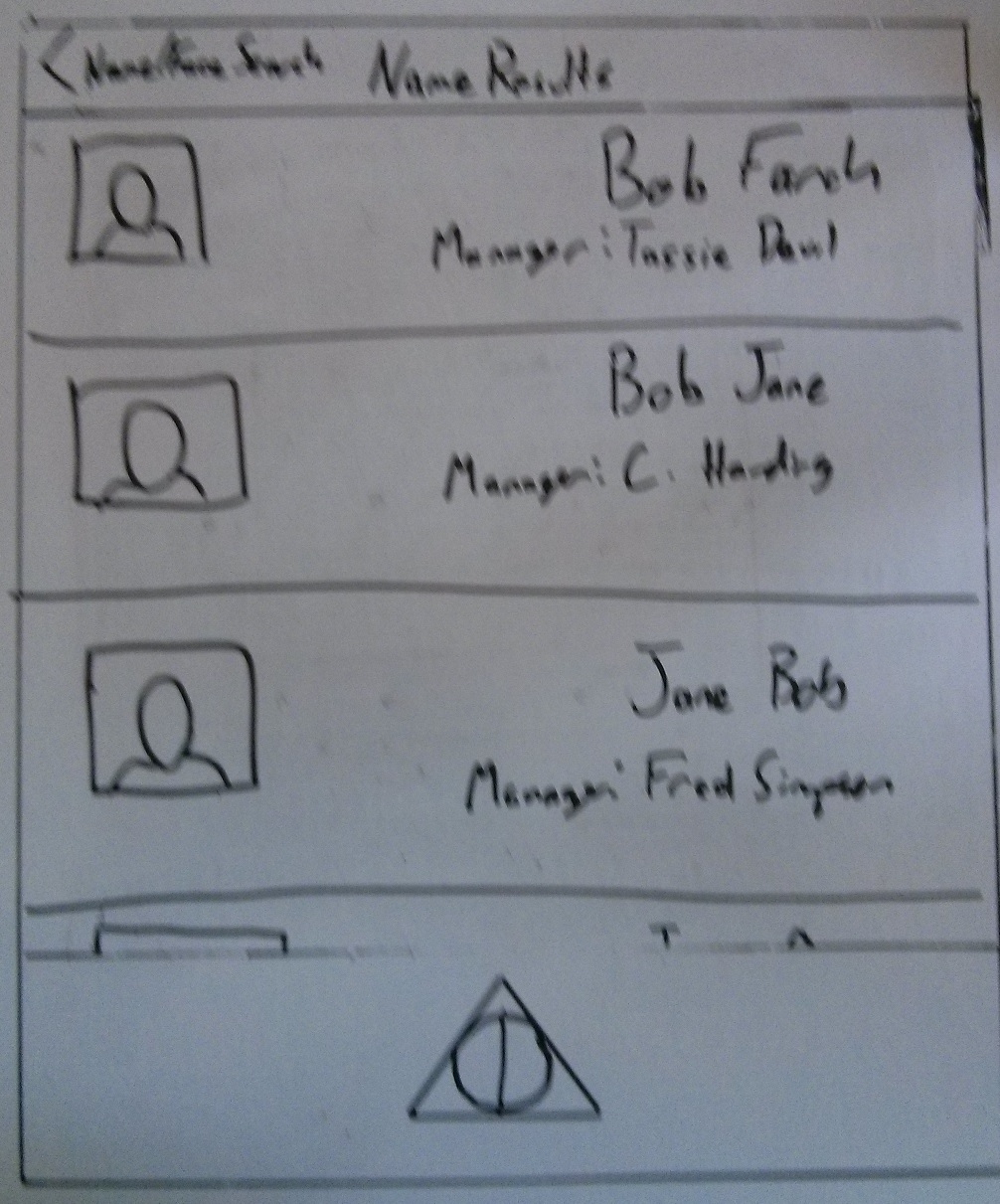 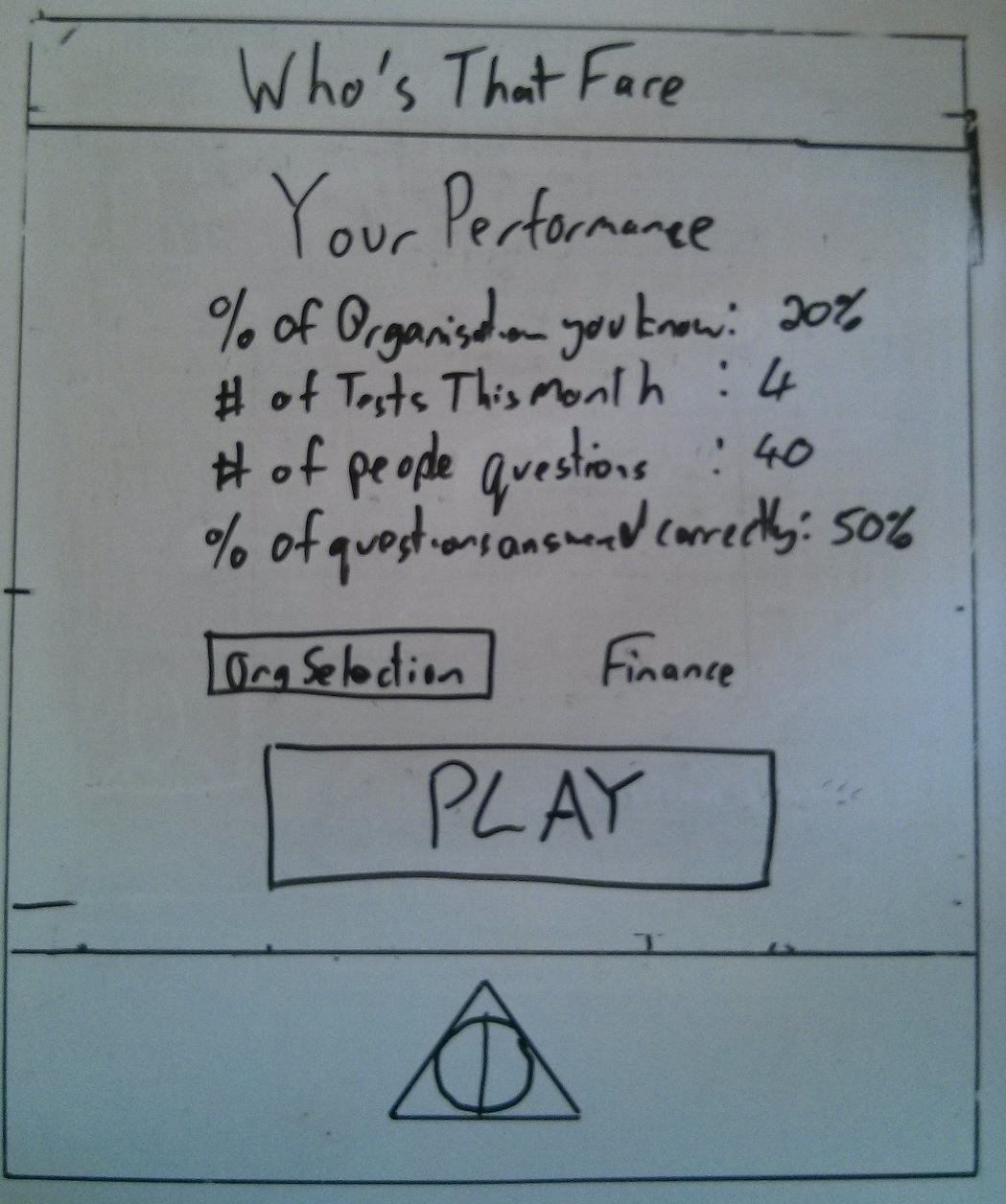 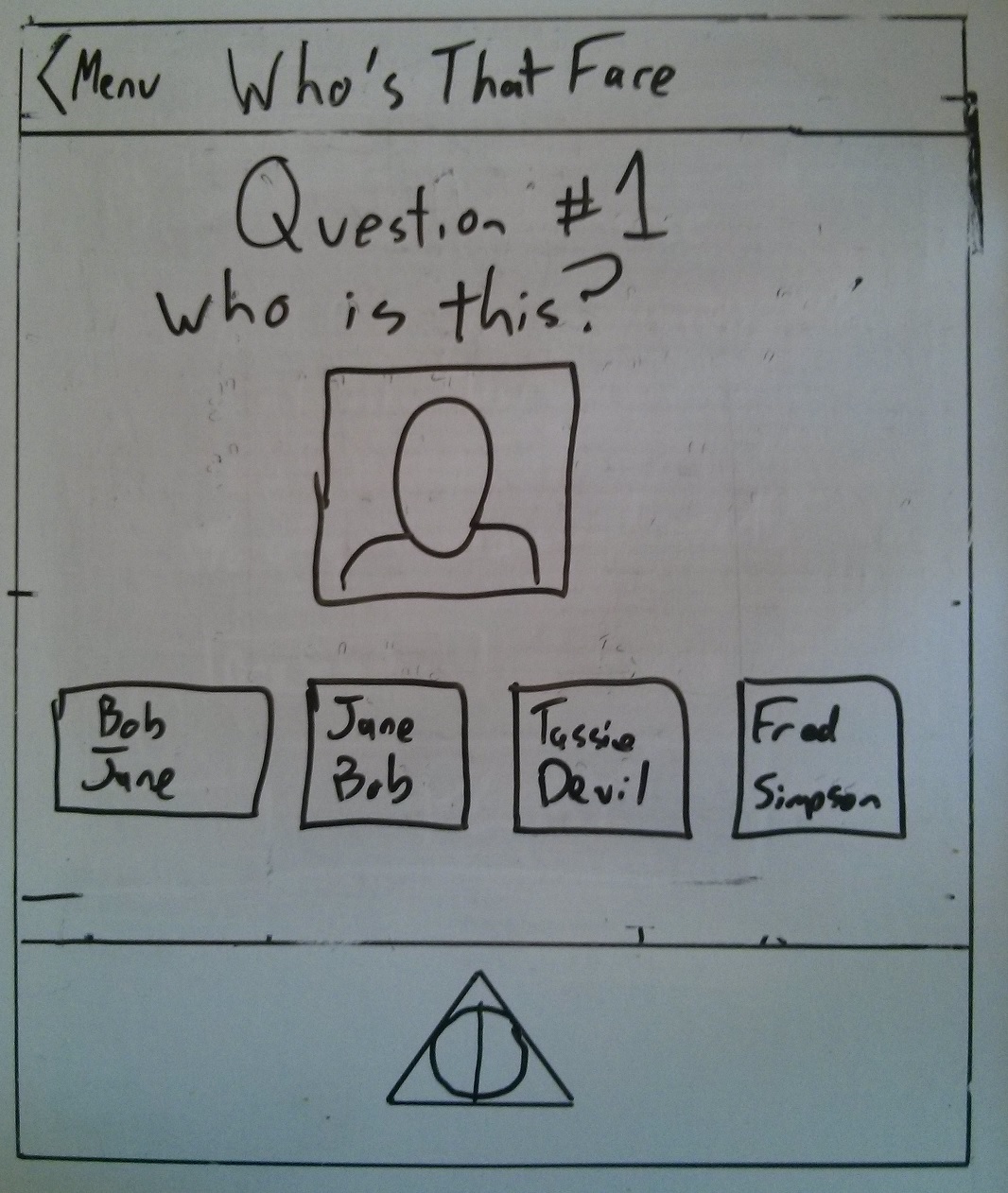 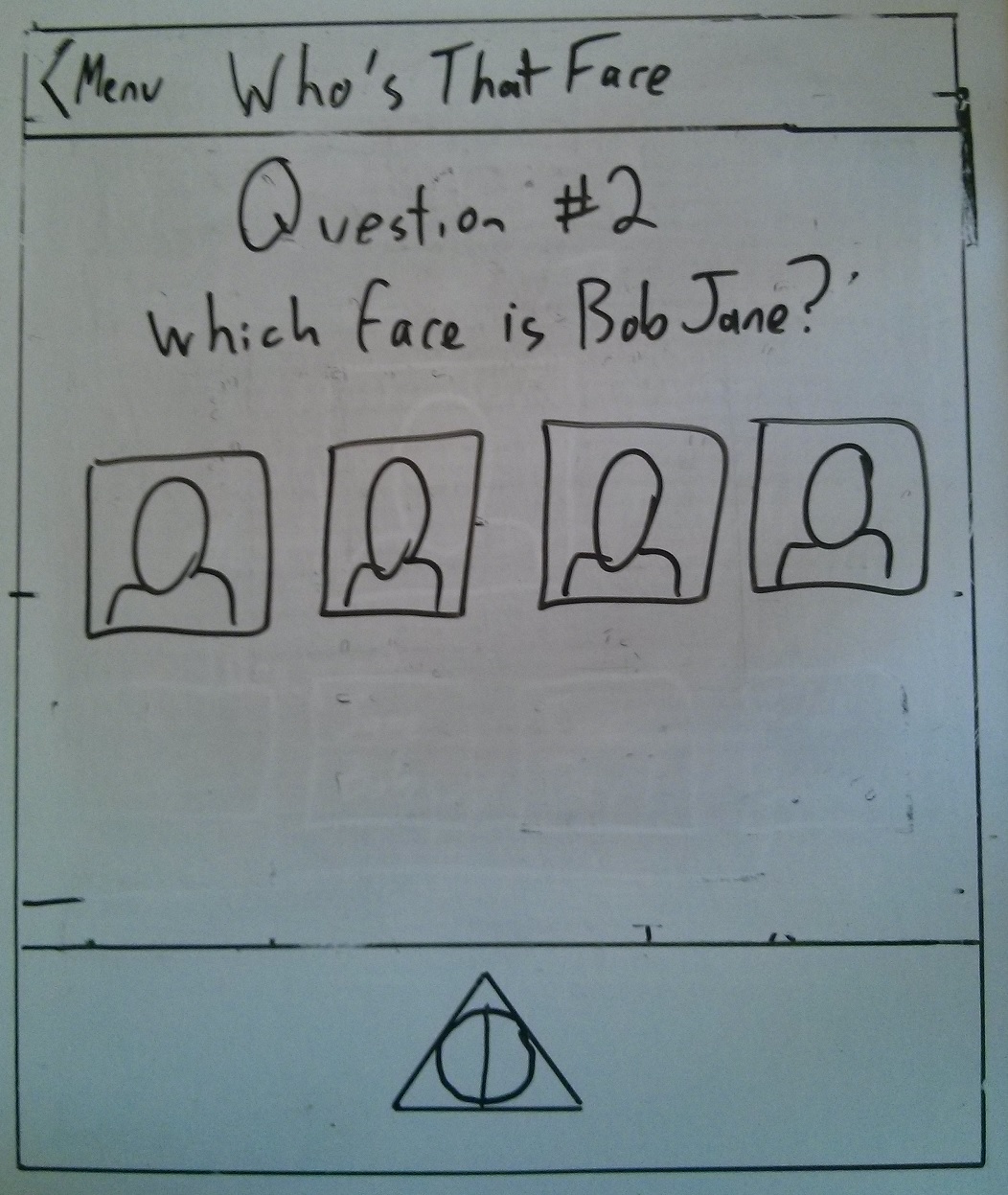 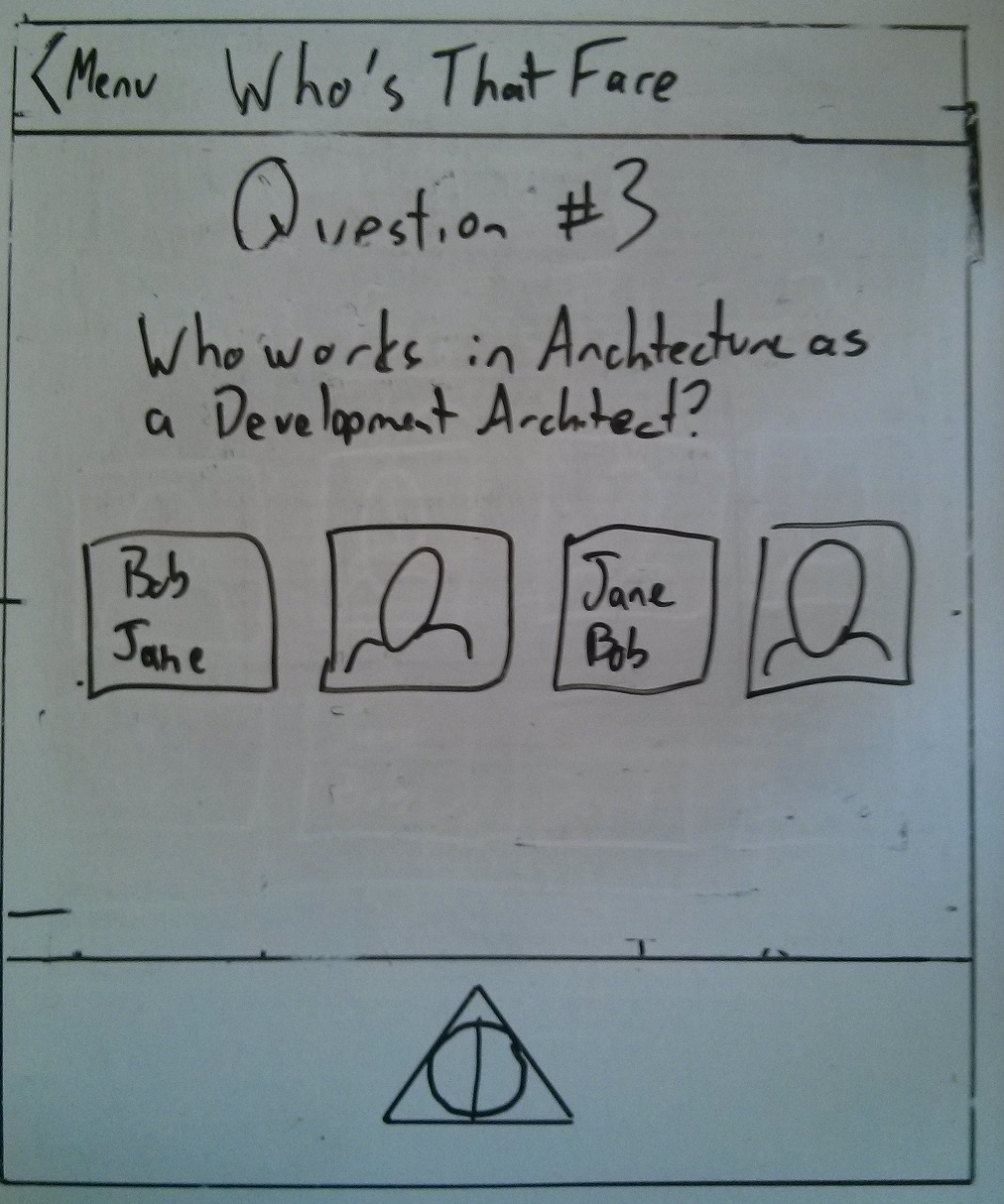