A summary about SAP Inside Track Munich 2013

On 12 October 2013 we held the first SAP Inside Track in Munich. In this blog we would like to give a short summary of this event. You can find more detailed information about the location, topics, sponsors and all the presentation content (mostly linked to slideshare/speakerdeck) including videos on youtube.com at http://wiki.scn.sap.com/wiki/display/events/SAP+Inside+Track+Munich+2013

For the pre-conference event we met at the Augustiner Bräustuben (a restaurant directly situated next to the “Augustiner Bräu” brewery, http://www.braeustuben.de/stueberl.php) starting at about 6 pm. Some of the participants had already arrived in Munich on Friday afternoon/evening, so it was a good chance to spend time together having dinner and one or the other beer. It was a very interesting get-together with all the people who decided to spend their weekend for being part of the SAP Inside Track Munich 2013.

The party didn’t take too long because a long and – considering the tight schedule –  strenuous day (in the most positive way) lay ahead. Special thanks to Njål Stabell and Ralf-Juergen Triebel from Neptune Software (http://neptune-software.com/) for this evening – it was the very first surprise at this event 🙂 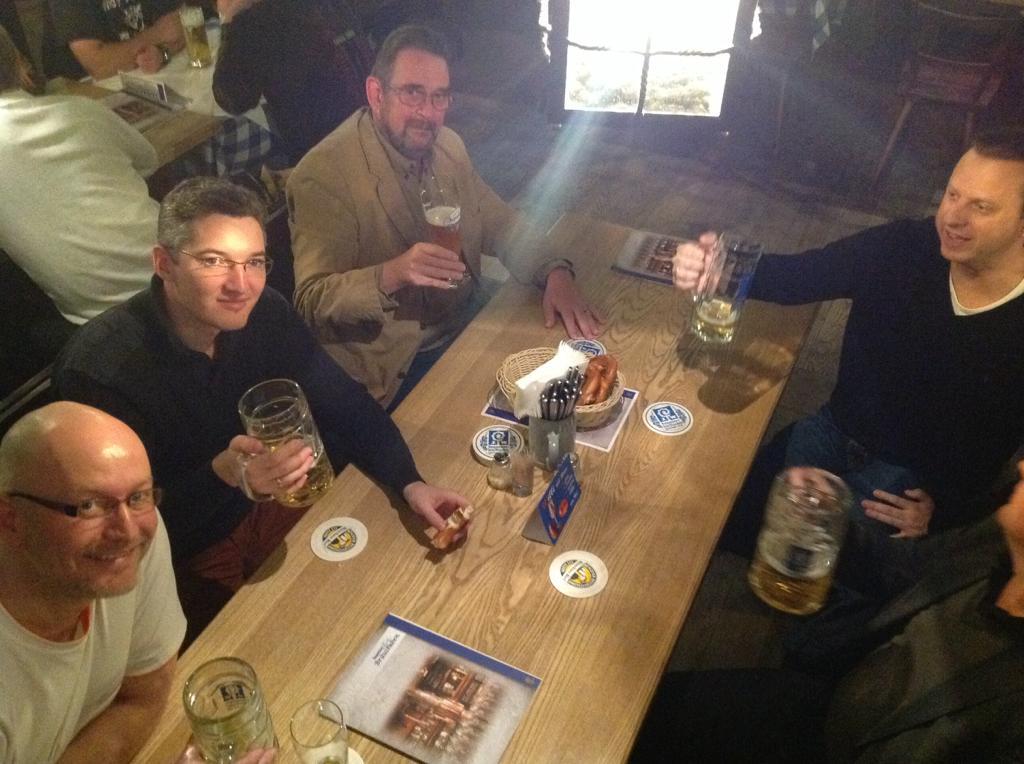 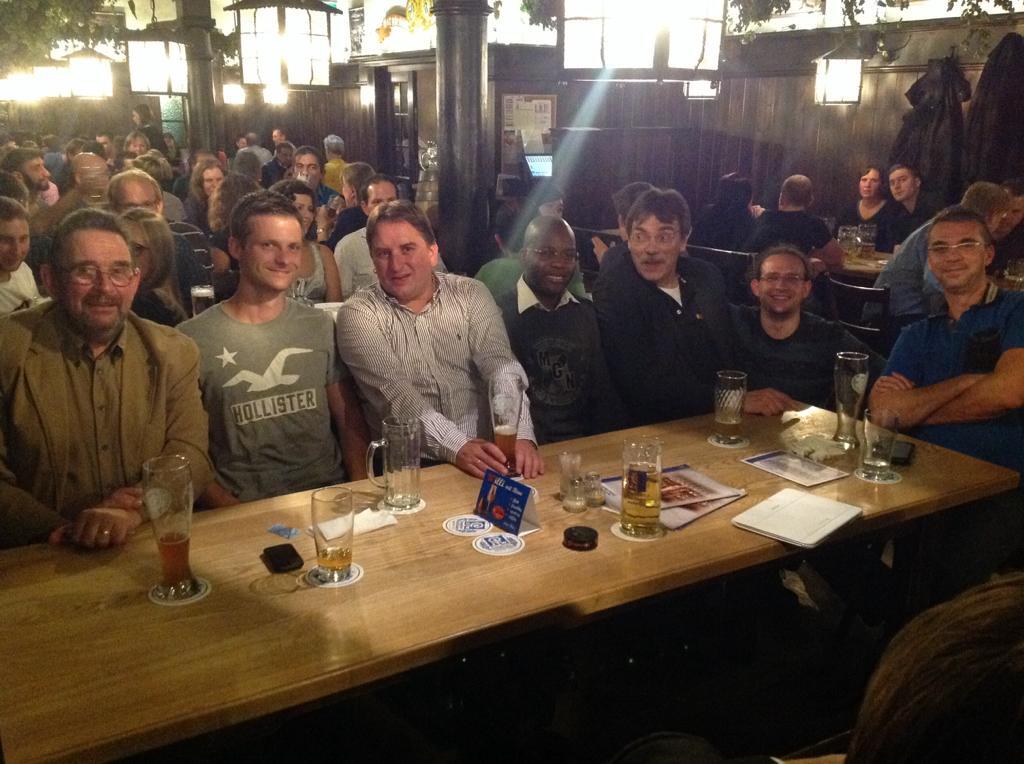 Suddenly it was Saturday. The alarm rang very early in the morning – the organization team wondered who had set the time table to begin at 9 am 😉 The first participants arrived at about 08:30. We were glad that all the descriptions and signs how to get to our event location (The HUB Munich, http://munich.impacthub.net/) seemed to work.

We used the remaining time for the last preparations, especially setting up the “Twitterwall” (very glad that we had it – realized by the Raspberry PI and https://github.com/remy/twitterwall) and the video projector. The Twitterwall was linked with the participants usernames on Twitter and the #SITMuc Twitter hashtag. So everybody could see the tweets about this event. We took great care that everything  happening  was well documented by tweets on Twitter. Thanks a lot especially to Gregor Wolf  as a “heavy-event-tweeter”. It was very cool to follow the content on Twitter concerning the #SITMuc, there were many reactions coming from all over the world – and the biggest question was: “What is in the beer crates our speakerdesk was made of?” 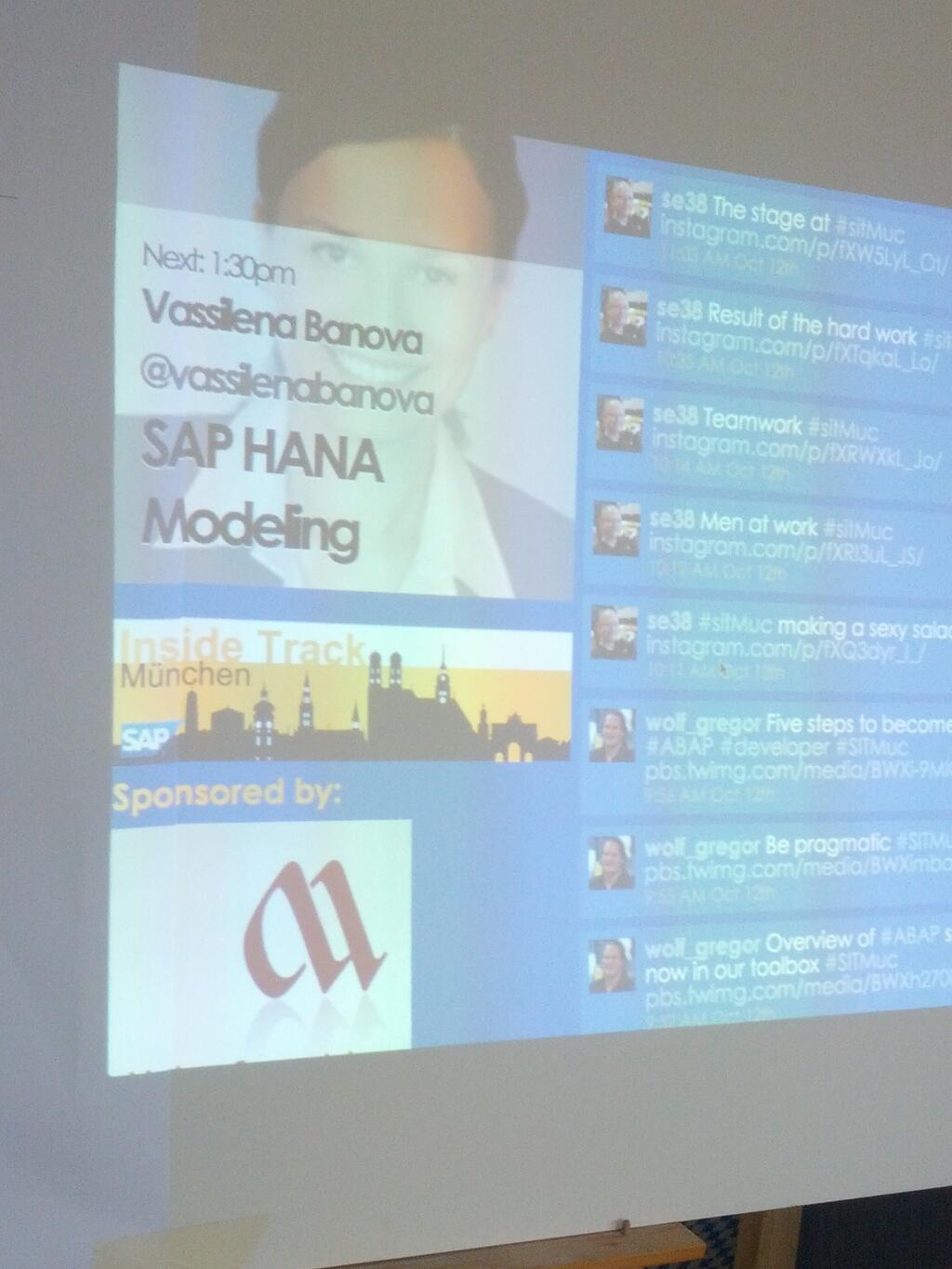 Sticking to the schedule, Gregor Wolf  and Martin Steinberg kicked off the event at 9.00 am (watch on youtube: http://www.youtube.com/watch?v=G-UoM-uo6YY) and Johann from “The HUB” (the event location) told us about their plans to evolve their collaboration environment.

The first lecture of the #SITMuc was about ABAP Test & Troubleshooting by Martin Steinberg as a warm-up. Starting with some explanations about how to classify this topics on the context of software development and its maintainance on a flipchart, he showed some handy features of the ABAP Debugger in workbench, UML-generating, ABAP Test Cockpit and ABAP Development Tools (aka ABAP in Eclipse; debugger and profiler) as well. You can watch the whole lecture on http://www.youtube.com/watch?v=_OgdGkE4QUU. Also the handout provided to the audience is available at http://de.slideshare.net/SbgMartin/abap-test-troubleshooting-sitmuc-2013. 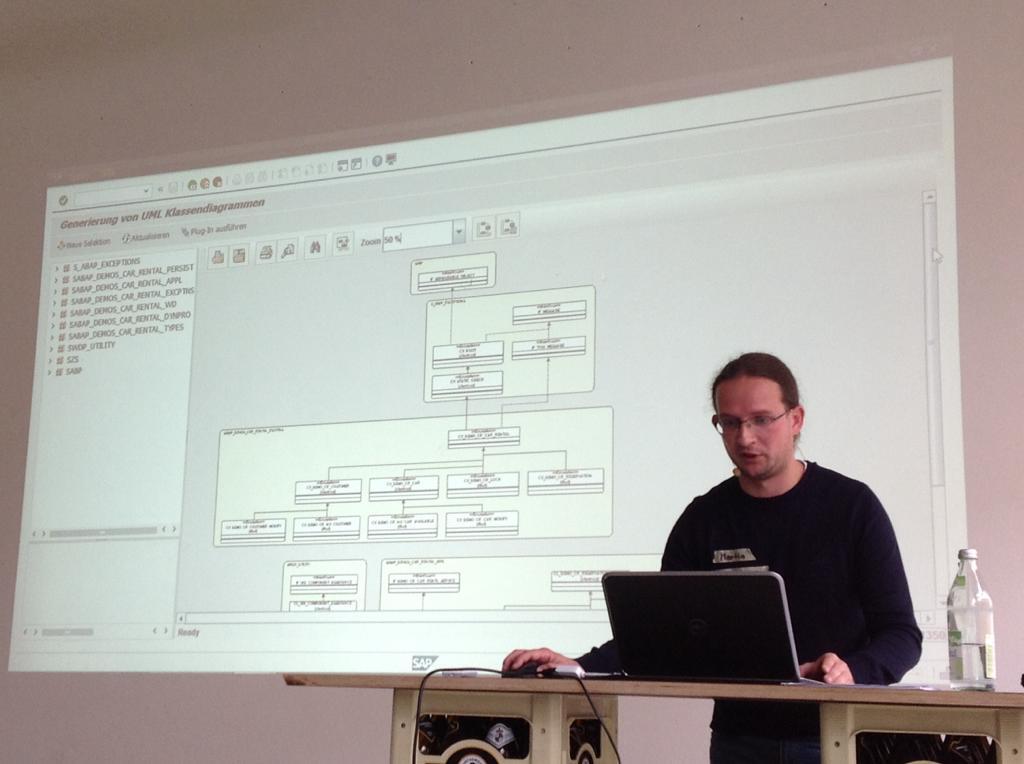 Infos for our HANA community

Then it was Andrea Taylor ‘s turn for her presentation about information for the HANA community. She announced that SAP kicked off a new Customer Engagement Inititative (CEI) group which handles HANA related topics at Walldorf. Interested people can join in anytime. She talked about new openSAP courses (https://open.sap.com/) and openHPI as well (https://openhpi.de/). Last but not least she showed us a funny video about creating presentations with powerpoint – a must see for all: http://www.youtube.com/watch?v=KbSPPFYxx3o

The third contribution of the day was given by Uwe Fetzer. He talked about the ABAP language news in SAP NetWeaver Application Server ABAP 7.40. His session was a sneak preview to the related sessions at the SAP Teched events. First he started with an explanation on how new ABAP features got into the 7.40 release (hint: Business By Design, NGAP). In combination of slides and hands on demos he gave a detailed insight into the topics “inline declarations”, “constructor”. Besides he showed some features of the new ABAP development tools (aka ABAP in Eclipse, have a look here: http://scn.sap.com/community/abap/eclipse) like automatic syntax check and auto completion, too. 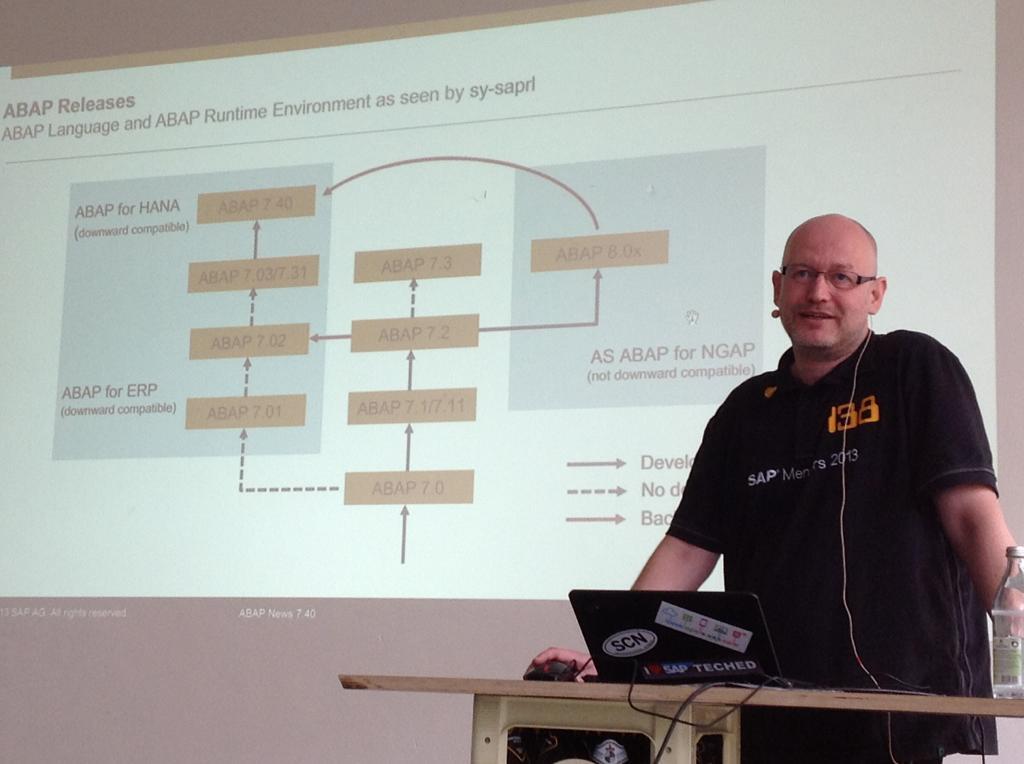 Watch this very interesting lecture (in German, with English slides and system) on http://www.youtube.com/watch?v=BCiPZ08p1yw

Damir Majer‘s lecture was the first non-technical one at #SITMuc. He talked about agile software development in comparison to other methodologies and what attitude is required to get there. With a very enjoyable presentation style and a very good slide-set (available on http://de.slideshare.net/dmajer/5-steps-becoming-a-agile-abap-developer-final) this material covers all topics from the needed technical skill-set, “clean code”, agile methodologies to pragmatic attitudes this is a must for every (ABAP) software developer. 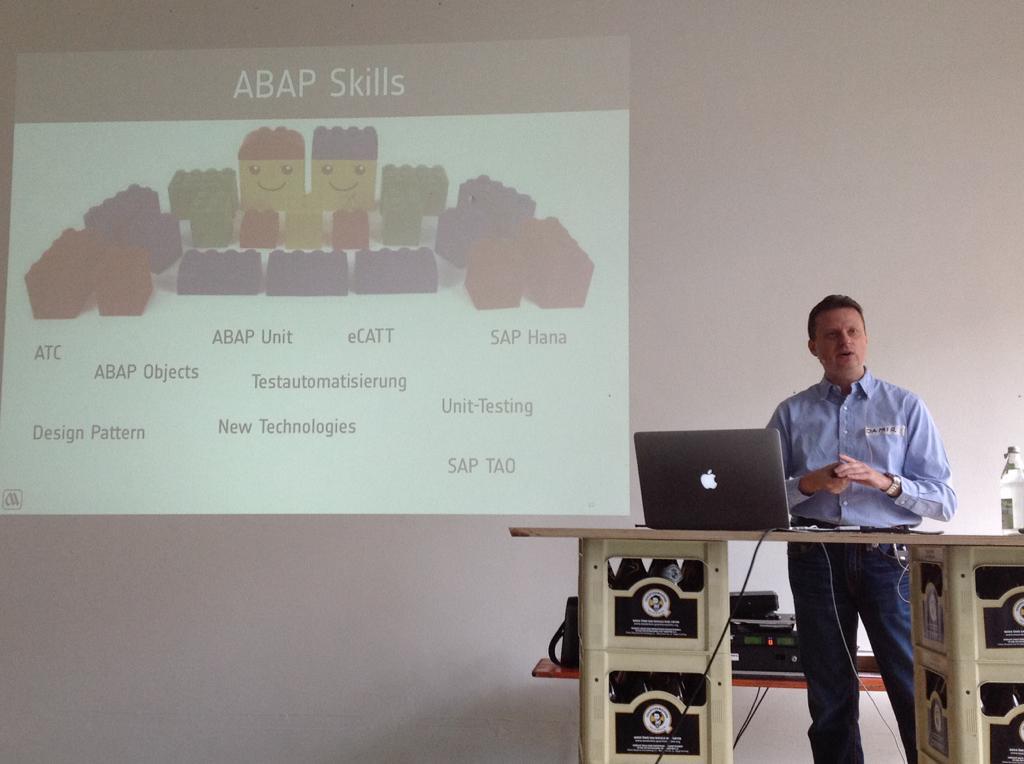 Usually for a conference, lunch is served by a catering service. At #SITMuc the attendees had to create their meal by themselves. It was real fun and everybody had the chance to engage in small groups for preparing one salad. Have a look at the photos on flickr.

During break Uwe Kunath showed us the amazing mocking framework for ABAP. You can find further information in his blog here: mockA released – an open source ABAP Mocking Framework

No SAP related event without HANA 🙂 So Vassilena Mladenova started with SAP HANA Modelling as the first lecture after the sexy salad lunch. First she introduced the Technical University Munich as a hoster for SAP systems for educational purpose (HCC, Hochschul Competence Center). 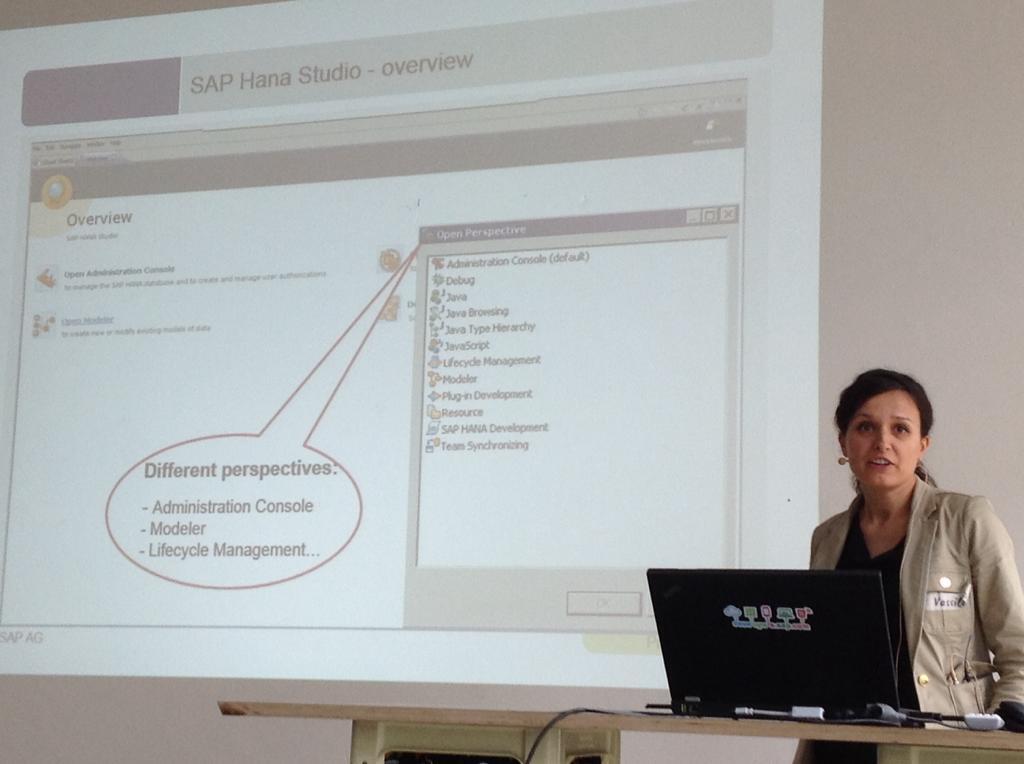 After that she explained the HANA Data Modelling process. It was a great opportunity for the audience to hear a lot of interesting things about HANA.

During the SAP HANA Modelling lecture some questions in the direction of ABAP on HANA appeared – so the next session was hold by Jens Weiler with exactly hitting this topic. He demonstrated tons of new ABAP features dealing with an SAP HANA database with AS ABAP 7.40 SP05. It seemed that he could fill the whole day with his explanations and exciting demonstrations: seamless transport management integration in AS ABAP, SQL-script integration in ABAP (world premiere!), consumption of HANA artifacts, best practices for use of OpenSQL (5 golden rules) and all optimizations within SP05. 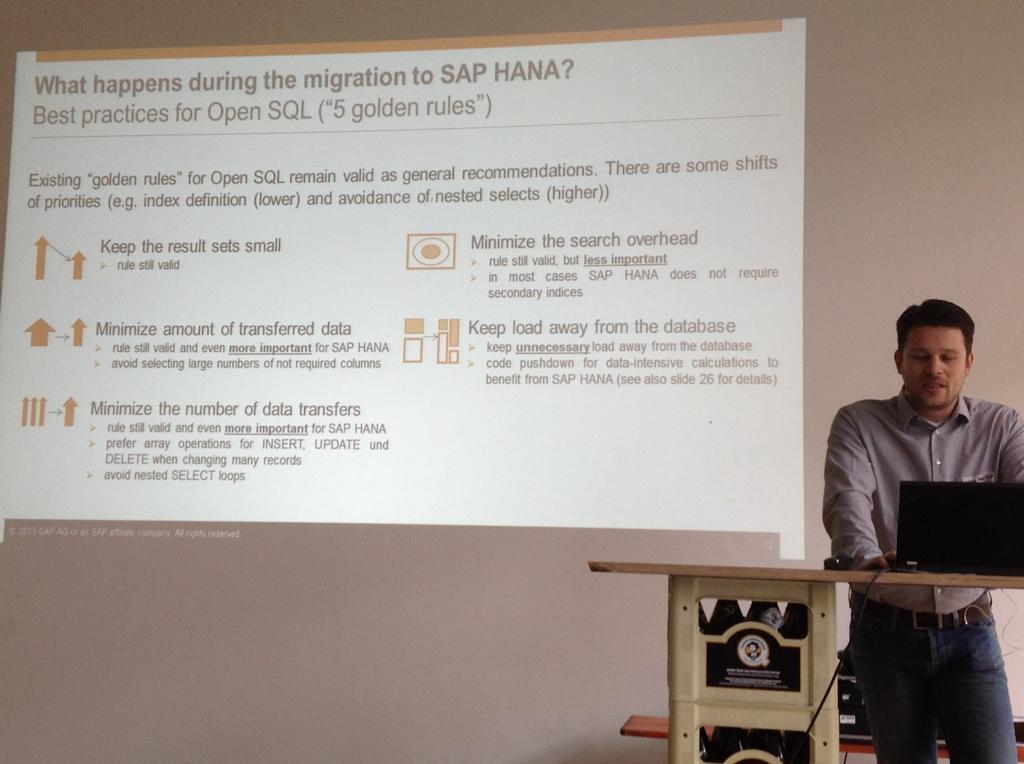 Concerning ABAP in Eclipse we could see that the new HANA artifacts are editable in Eclipse only, this emphasizes the meaning of the ADT. The audience was very interested in all these topics and in Q&A many questions came up. If you have an AS ABAP 7.40 already, you can look at the reference scenario here: http://scn.sap.com/docs/DOC-41248 (created by Jens Weiler). More information here: http://scn.sap.com/community/abap/hana

SAPUI5 with the Neptune Application Designer 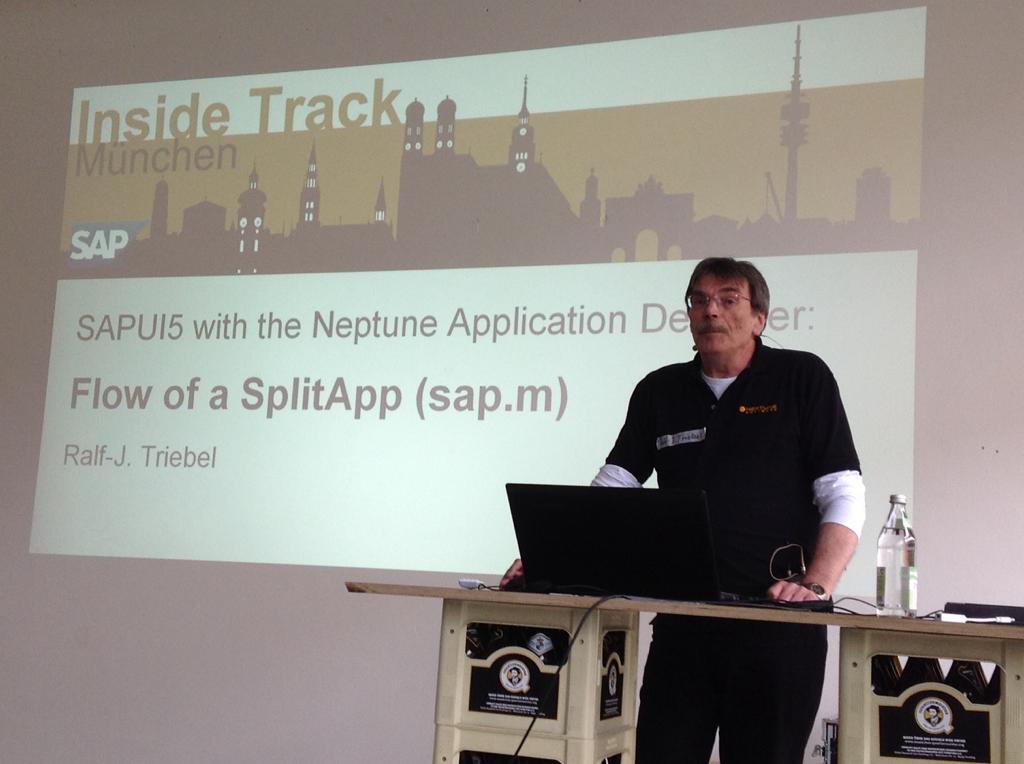 It’s a tool to create ABAP based SAPUI5 applications by using existing ABAP (workbench) know-how. SAPUI5 is the latest framework delivered by SAP for creating state-of-the-art HTML5 applications with JavaScript and CSS3 which can be used on smartphones, tablets or desktop PCs. Ralf-Juergen.Triebel first explained the methodology and the framework in general while Njal.Stabell gave a deep dive into live creation of an app. By using the Neptune Application Designer an ABAP developer can create HTML5 apps without being an expert on JavaScript, HTML5 and CSS3 – the framework generates the necessary artifacts. More information can be found here http://neptune-software.com/.

The last contribution came from the SAP Mentor Phil Loewen. He talked about the “Design Thinking” approach and its utilization at SAP – even at the SAP InnoJam events, which take place the weekend before every SAP Teched. In a very bracing lecture he showed how to get a solution by facing the problem with an interdisciplinary project team (from problem space to solution space). 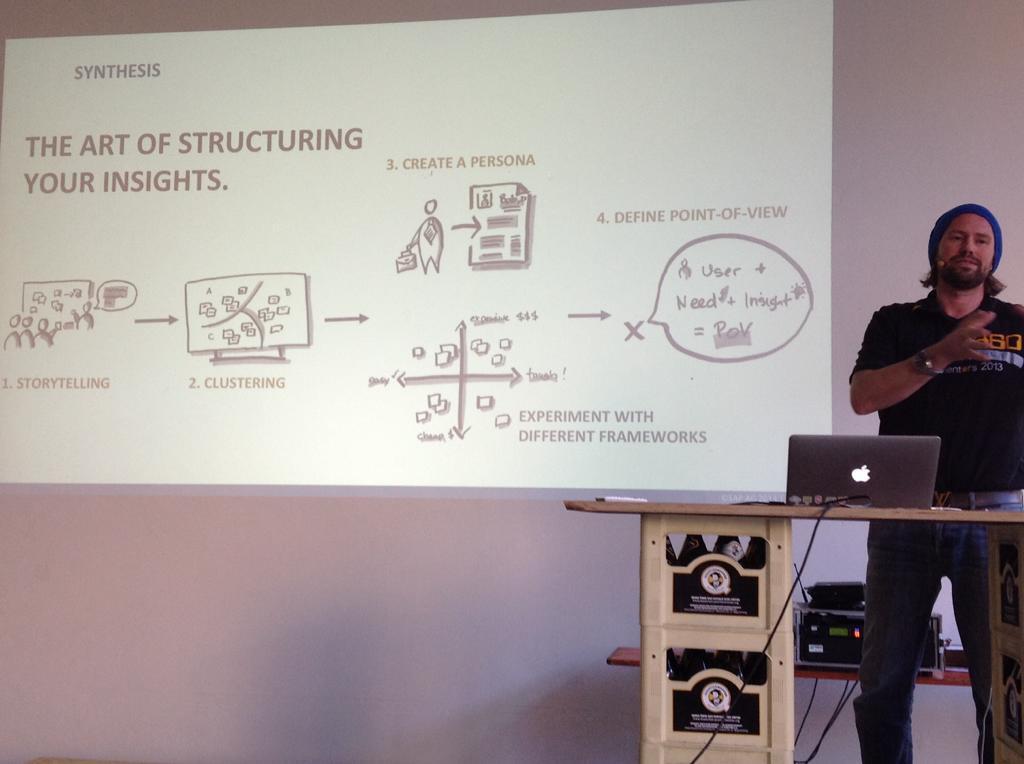 He stated open mindness and avoidance of haughtiness for all project members. With his presentation the official part of SAP Inside Track Munich 2013 draws to the end. If you want to know more about this topic you can first have a look here http://de.wikipedia.org/wiki/Design_Thinking.

Gregor Wolf and Martin Steinberg got the last couple of minutes to make a small summary of the day. It passed by very fast with a lot of surprises and highlights, interesting talks, get to know interesting people and last but not least exciting presentations. The first surprise of the conference day was that due to the great engagement of our our sponsors Neptune Software, Damir Majer Consulting, Stefan Kittsteiner (even for all the help in front of this event), Fritz&Macziol Group (for providing ABAP on HANA trial vouchers and sweets, too), SAP Press, SAP Mentors, Gregor Wolf, Hendrik Brandes, Progressive Recruitment, the complete event Saturday was free of charge for the attendees (coffee, drinks, lunch… and in the end a Quartiermeister social beer :-).

We announced the next event which will take place in Munich: we plan an SAP CodeJam vor ABAP on HANA in spring 2014.

During the wrap-up two crates of beer were carried into the conference room – what a nice finale!

Some attendees stayed another hour to have a smooth beer before to go to the after conference event location – and to do the “Untappd” check-in, of course 😉

We selected the restaurant “Kapitales vom Rind”, located in Schwabing for our after conference event. It’s a brilliant steak house with smooth ambience. About 30 attendees joined us and we had a real great evening with good communications, good beer (from Lower Bavaria) and excellent dinner. We think it was the best choice to go there and everybody was in a good mood. At about 01:00 o’clock the restaurant closed, but some of us where in such a good mood that they decided to continue the party in a club called “Eat The Rich” – but at 04:00 o’clock even that party ended (but there was another surprise: thanks to roman.becker :-))

At this point it’s up to us to say THANK YOU. Everybody who joined as attendee or helped us during organization helped to make this first SAP Inside Track 2013 in Munich to what it was: a fascinating community event.

Of course there will be an SAP Inside Track Munich 2014 – stay tuned. We hope to meet you there.

It seems #SITMUC was a very enjoyable event. "No SAP event is complete without HANA" 🙂 True and now days mobility is the flavor of the season.

Would be checking on the videos posted in youtube for ABAP based lectures.

thanks for your reply. Yes, it was a real enjoyable and very funny event - it was full of suprises (in the most positive meaning). And of course it was a very fascinating experience for myself as member of the organizing team. I really recommend everybody who's interested in the SAP stuff to attend an SAP Inside Track - or if you like to organize such an event.