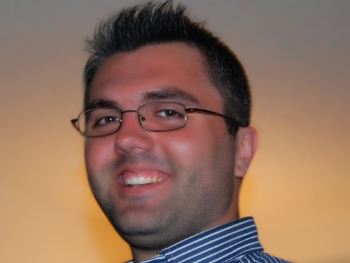 Zahid Yener is the SCN Member of the Month for November and I spoke with him on a sunny Halloween day. Did he notice my orange shirt? 😉

We had a good time talking about travels, Europe, Turkey and Istanbul (difficult to navigate with a stroller!) and Zahid shared good, positive thoughts about engagement on SCN and how it is important to learn and not be afraid of it. Don’t worry about the questions you ask, everyone needs to learn something at some point!

Read more in this interview and see this short video of Zahid presenting himself to the community. If you are passionate about BI as Zahid is, read his blog post BICS vs BAPI vs DF Relational Connection that will reach 30,000 views soon!

Merhaba Zahid! Can you tell us a bit about yourself, where you live, who you work for, and other things you would like to share with the community (hobbies, fun facts)?

I am a BI consultant working for idekon (short for intelligent decisions consulting) in Istanbul, Turkey. This is a company I started with my current manager, we are five people now. I travel a lot for my work, most of my projects bring me to other locations in Europe: Italy, Switzerland, etc.

I was born in the city of Troy, now called Çanakkale and went to study in the US when I was 18. I studied at Orange Coast College close to Huntington Beach, California and later got accepted to universities I applied, but I had financial problems at the time and had to quit school and start to work. I have good memories of my time in California, loved the weather there. And I still have good friends that I’ve kept in touch with.

After over 7 years in the US (California) I went back to Turkey and settled down in Istanbul. Today, if I get spare time from work, I like to go to the movies, read books, and travel. I also like to play soccer but it has been over a year now I didn’t get a chance to play. My wife and I are expecting a baby next month in December.

Note from Laure: Nice! Another MoM about to become a Dad J Do you know which previous Member of the Month is also expecting a baby? Write the name in the comments section.

Do you know other Turkish members of the SAP community?

Yes, Hüseyin Bilgen was previously my manager at FIT Consulting. He blogs regularly on SCN.

You have an interesting resume. It seems you studied electrical engineering but held sales positions at the beginning of your career. Now you are a BI consultant, how did you manage this change of career path? And do you think that your background in sales brings something that other consultants may not have?

When I was in college I took mostly computer science classes as well. When I was living in the United States one of my friends started a company and needed someone for a sales and management position. He had to travel a lot and he also needed someone who can be trusted with his bank accounts and business. He offered me the position and I accepted it. I dealt with customers on daily occasions.

When I moved back to Turkey, I looked for a job in the IT industry. My brother is a system engineer and guided me to become an SAP consultant and introduced me to my first boss in Turkey at FIT Consulting. That’s what led me to where I am now.

Consulting is very similar to sales because in both areas, you need to deal with customers directly. 90% of consulting is managing people and customers. If you are not good at that, it doesn’t matter how much you know the technical stuff. Customers won’t want you if they don’t appreciate and trust you.

Note from Laure: It’s funny that for the second month in a row I find out that SAP love is a family thing!     😉 Rick Bakker in the October blog explained how he introduced his brother Paul to SAP and how Paul later introduced him to Workflow. These are nice stories!

I became a member of SCN when I started my consulting job in Turkey in 2009. I was doing some research about SAP BI solutions and it was the best site to learn and test my knowledge. I learned so much with the community! It gave me a lot of information.

How do you find the time to contribute on SCN?

Instead of killing time on the net with Facebook and other pages, I try to follow SCN. I check threads at night instead of watching TV.

Do you only spend time in the discussion forums on SCN, or do you also read blogs or documents?

In addition to spending time in the discussion forums, I also read blogs and documents. I actually enjoy reading them more. I try to follow certain people’s blogs that help me with my BI experience. With blogs and documents, it is also possible to learn about SAP’s roadmap. This makes me better in what I do. As a consultant, I not only need to develop reports and universes, but I also need to guide my customers correctly which is the core of consulting.

Outside SCN I follow blogs such as everythingxcelsius.com and www.dagira.com from well-known members of the Community Mico Yuk and Dave Rathbun.

Some of my friends ask me this as well. I tell them not to hesitate to ask questions on SCN. Before I became active, I actually started asking questions about the problems I was facing. After that, I started answering to the similar questions I faced before.

Note from Laure: I agree with Zahid. I sometimes here that people would like to remove some of their earlier posts because they feel embarrassed at having been a “newbie” before. People should not be ashamed of anything, everyone has to start some day and if you can’t find answers to your questions when you search SCN, just go ahead! Just by asking the question you’re probably helping other people who will benefit from the discussion. If you want to learn something, just go ahead.

Ingo Hilgefort for his knowledge about BW and BusinessObjects and for knowing how to integrate both so well. He makes really good recommendations that I benefit from in my work.

Tammy Powlas for her BusinessObjects blogs. She helps everyone understand SAP’s vision. When I was talking earlier about how I learn about SAP’s roadmap on SCN, it is thanks to people like Tammy.

Simone Caneparo who’s an amazing help in the discussion forums.

What technology recently had you most enthusiastic about?  It doesn’t have to be related to SAP.

I am really enthusiastic about in-memory and data mining. The next generation of reporting will be about predictions and data mining. It is important to know how my business is going, but I am more concerned about the future. This is very important. Data mining will be very powerful technology if combined with in-memory databases.

I did a successful POC on HANA and got a HANA certification last year. Other vendors are trying to catch up on in-memory computing, it will become even more important. In the future most companies will be using in-memory databases. Right now in Turkey people want to wait and see if HANA is successful, as they do with other technologies. I know some customers who bought BPC on HANA, and in a year or so things will pick up.

Definitely Android. Because, Android is more flexible than iOS and Windows is behind in mobile technology. Also, Android is an open source platform that gives you more ability.

Yes, I am: @zahidyener. I actually try to be on twitter but for some reason I am not very active on twitter. I use it once in a while and mostly to follow people and get opinions about the people I follow.

Would you say that you use Twitter more for sharing personal opinions? I saw some interesting comments on the state of the world, the US elections, etc 😉 How do you combine the various aspects of your personality on Twitter: SAP consultant, vocal citizen of the world, etc?

I usually use Twitter more for personal opinions. I follow politics and social events in the world. I think I use twitter as more of a vocal citizen of the world than as an SAP consultant. The reason is that I like politics. I I grew up in politics because my father held positions in governments and political parties in Turkey. I’m not planning to be in politics, I just like to observe the dynamics.

Every month, a member of the SAP Community Network is recognized for exemplary behavior: sharing knowledge with peers, being helpful and taking on additional tasks to support community engagement. See the list of previous SCN Members of the Month.

it's very nice to see you in MoM blog.

Belated happy birthday and becoming MoM of the month.

Congrats zahid yener, keep it up.