We pulled it off: Rumspringa was happening in Las Vegas last week!

The ragtag SAP Jam Band got people singing and dancing and having a good time. One surprise member of the Jam Band, in particular—Sam Yen—made my day. 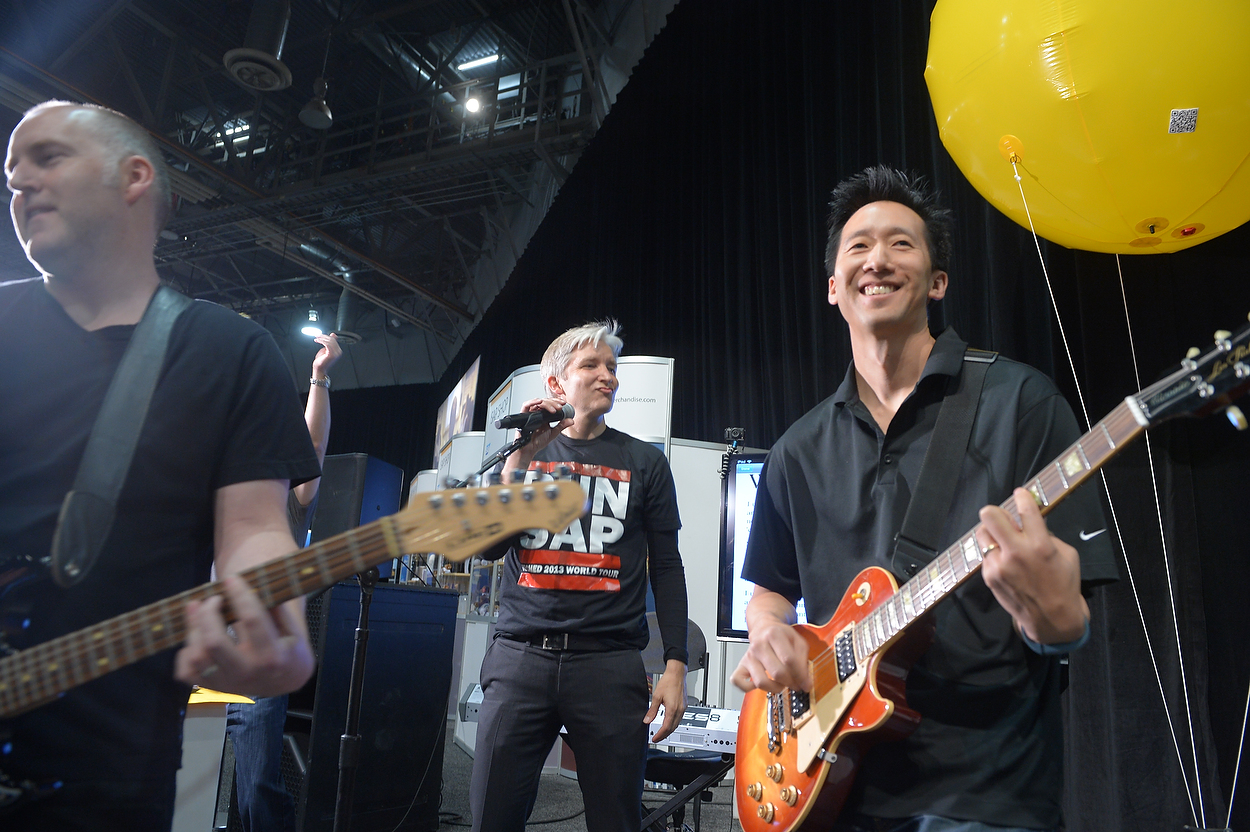 Doesn’t Sam look super happy in this picture? He serendipitously walked by as we were setting up and saw our instruments.

“What are you doing?” he asked.me:

“We are the SAP Jam Band and we are going to jam,” I said.

When he heard we were going to play in front of an audience, he almost left, but we convinced him to stay and it was just plain magic.

Last year, thanks to Marilyn Pratt’s drum circle, everyone was already on their feet and moving, so it was easy to take it from there.

But this year, people were getting comfortable on bean bags, beers in hand, leaning back, expecting to be entertained. I almost blurted out: “Did anyone read my Rumspringa post?” The one about the spirit of Rumspringa of everyone jamming, and exploring. It would have been comical.

Anyway, lots going on in my head at that time and not enough focus on my main task at hand: singing. I was all over the place! SAP Mentors and some friendly folks to the rescue, they started to dance and helped others off the bean-bag chairs and the rumspringa was on.

After that little sputtering, we sounded, as Chip Rodgers later remarked: “Tighter from the start, compared to last year.”

Check out Christopher Solomon’s  secret bootleg video of our first song: Birthday by the Beatles, I love him splicing in Ed Sullivan as well as footage from American Idol. Well done!

Then there was AC/DC: “It’s a Long Way to the Top (if you Wanna Rock n’ Roll)”. Abesh Bhattacharjee was earmarked to sing it, but last minute he couldn’t join. We liked the song, and asked the audience if anyone out there knows it? An Australian giant stepped up to the microphone and just rocked it. 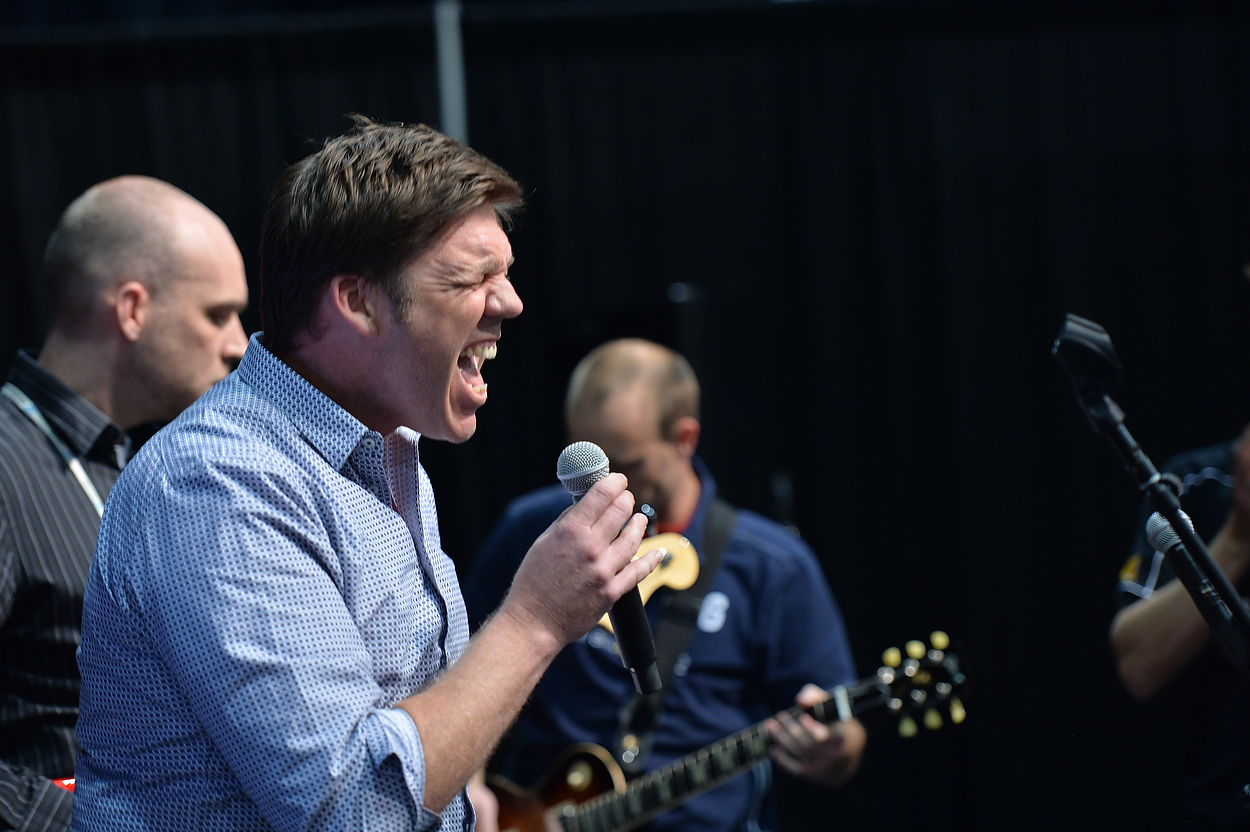 It was genius and magical!

By then most people were smiling and dancing and we happily played the rest of our set. When we were finished, we recalled the riff Sam Yen played when he picked up the guitar Brian Adams’s “Summer of ’69.” We rocked that last year and now played it as an encore.

I saw Aiaz Kazi voicing every word, clearly knowing the lyrics better than me. Thanks to wireless tech, I grabbed the mic and we sang it together from the floor. 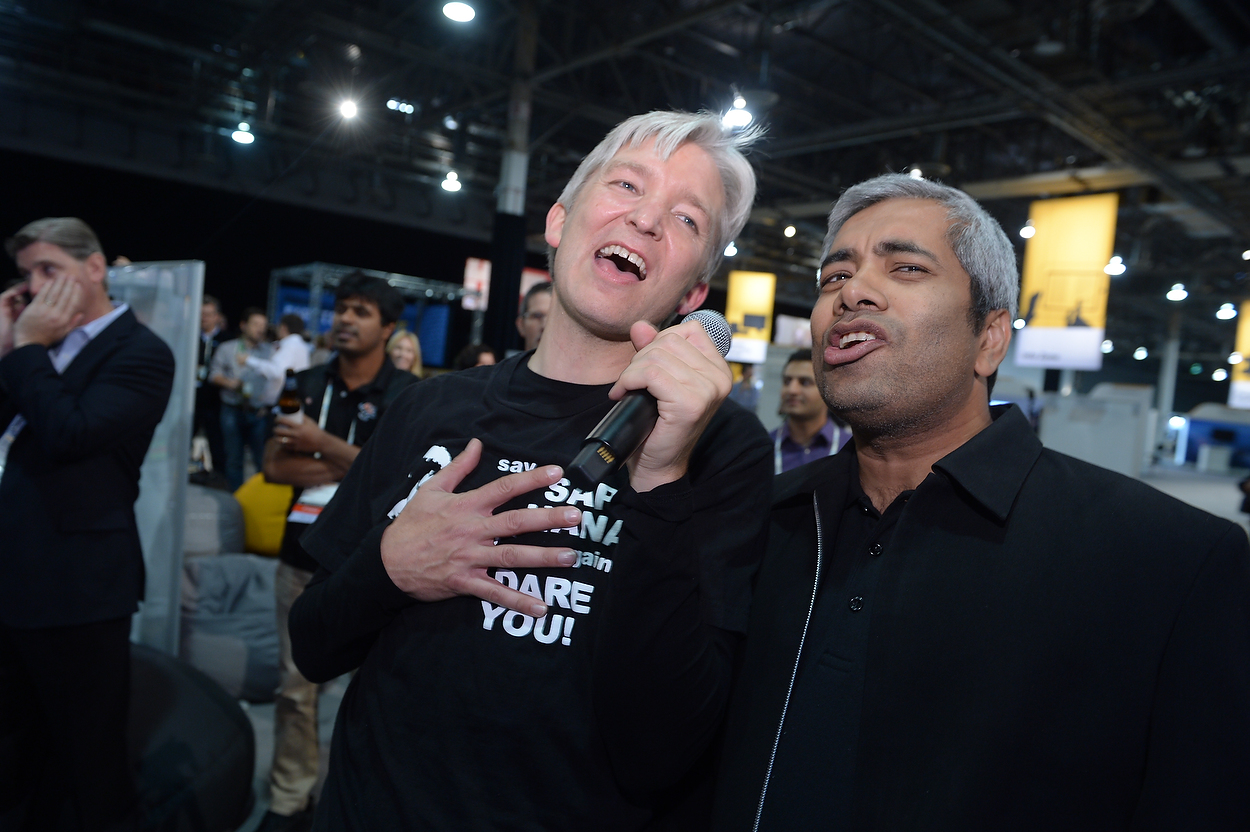 Picture of the core band 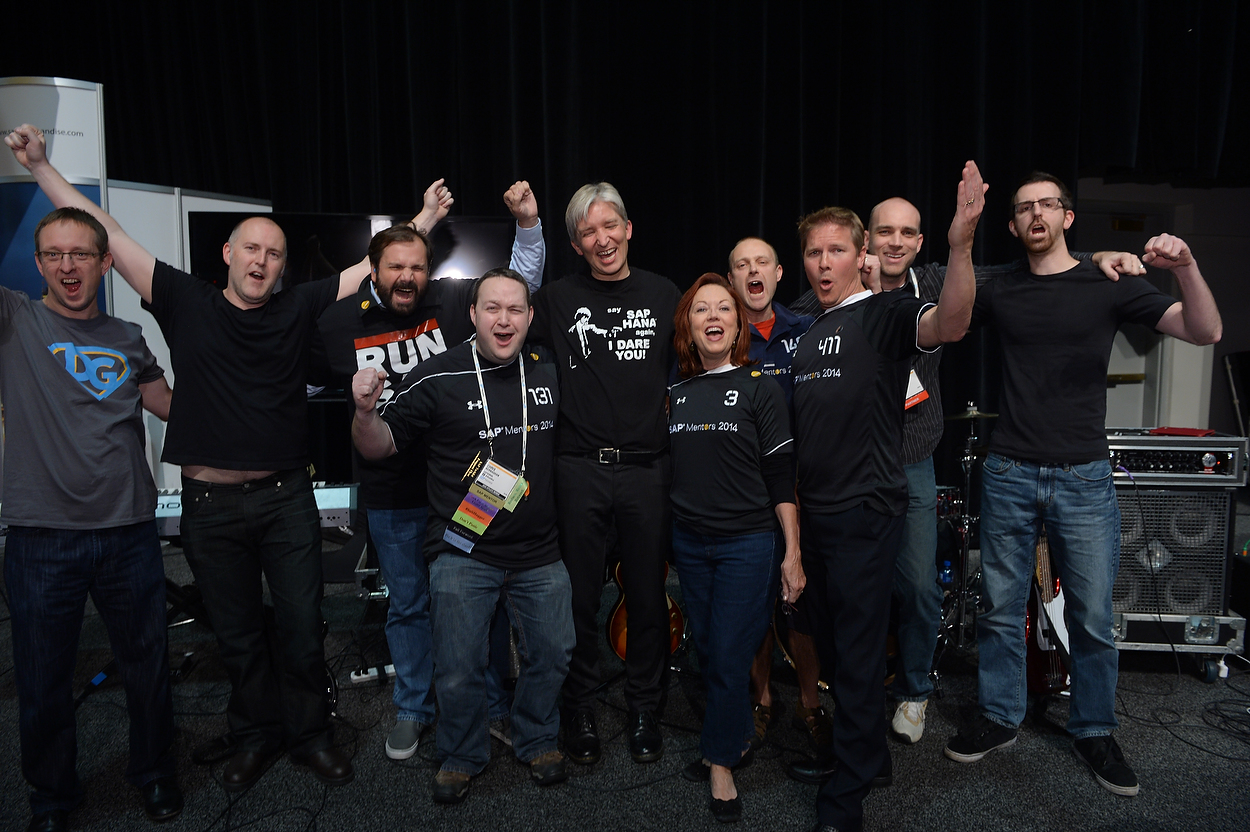 More pictures here. As far as I know all of the pictures are by the good pros hired by the TechEd team. Let me know if not and I will correct.

We put this evening clearly in the Rumspringa success box, knowing there is room for improvement, even though the serendipity will be hard to beat.

Onwards to Amsterdam, where some of us are working on pulling it off again, alas without Matt Harding the main musician genius that made us sound good in Las Vegas.

Here’s our playlist for the Amsterdam Rumspringa:

Now after listening to these songs for the last couple days, we realize for them to really sound good, having some brass would be marvelous. Especially “Love Shack” and the Blues Brothers songs would sound so much richer if some of you would bring your horns. Just ping me or simply comment on this thread. It would make my day, or even better our next week.

“Love Shack” also thrives from the interaction between male and female voices, please don’t be shy and join us. We will rehearse on Monday evening at the convention center around 8pm and a second time right after Tuesday’s Demo Jam .

Performance is scheduled for 6pm on Wednesday just before The Fray performs and no, it won’t be on the main stage, but just outside of the SAP Mentor room Hall 8 F102, unless The Fray is doing sound check that evening, then we will move to another location. We will keep you posted regarding the Rumspringa Amsterdam with the SAP Jam Band.

So see you in Amsterdam! As you know, I can’t wait!

Great blog Mark!  Everything came together and the SAP Jam Band ROCKED in Vegas this year!   Can Amsterdam top that?  We'll see!

I was so bummed that I missed it 🙁

But we still have Bangalore !!!

Not sure about main musician genius, but <blush> thanks! And don't forget your pivotal role in getting us all organised and motivated in the first place and pushing us to do even more than last year.

Have an awesome time in Amsterdam - Really wish I could be there to jam out again and see what spontaneous stuff happens this time.  And what I reckon might work better for Amsterdam - have the big screen facing the band with the lyrics on it and someone on the side moving the lyrics because playing music with little to no rehearsal time is hard enough without having to remember lyrics - and hopefully that may make people more courageous to come up and sing/play/dance!

Be Excellent to Each Other and Party on Dudes!

Missed it last year. SOOOOOO glad I got to check out the band this year. Put on a GREAT show and loved that anyone in the room could be a part of it. Look forward to next year!

Great blog Mark. Cannot wait to see and hear this in Amsterdam.

Please bring your brass or other instruments and join us. Tomorrow Monday 8pm Hall 8 Room F102 is first rehearsal. Everyone welcomed.As often it is instigated by SAP Mentors, but open to everyone.

We had great fun at last year's inaugural jam band, but this year was even better. I, too, am already looking forward to next year. Thanks, Mark and Matt, for all the advance work.  I hope you all have as much fun in Amsterdam as we had in Las Vegas.

And the AC/DC Mystery Man is one Adrian Vaughan I do believe.  Wow, that was a great example of serendipity!

Will we be able to enjoy tonight's Jam from afar?

You are correct Sue! Verily, he is the reincarnation of Bon Scott. 😏

Vegas Jam Band was fun to watch and participate.   Belting out Summer of 69 from the audience was a blast - especially for this bathroom singer 🙂     A quick question - I asked this in my tweets as well from Amsterdam - why not call it BandJam?  You don't even need to go through an official naming process 🙂    DemoJam, InnoJam and the latest BandJam!