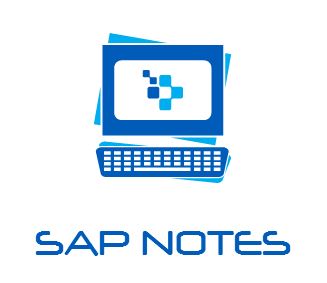 This is the first post of a blog series focused on SAP OSS Notes. In this series, I’m going to explain everything you will need to fully understand SAP OSS Notes concept, how to find them, their application and risks. If you are an ABAP developer, BASIS or a Functional consultant I’m sure this information will be really valuable for you during upgrade projects and support periods. In other words, having this knowledge will make you less dependent on SAP support and as a consequence you will contact it when you have no other option.

Before saying what a SAP note is, it crucial to understand SAP versioning strategy and how upgrades are made.

Each SAP product, including SAP ECC which is the scope of this blog post, has a version (usually represented by a number). The bigger this number is, the more up-to-date the software is. Many years ago companies were using SAP ERP known as R/3 (versions 4.0B, 4.5B, 4.6C, 4.70 for exemple – Check R/3 in Wikipedia and this SDN thread for more information about SAP ERP releases). At that time, SAP developers where making its software better by doing two different activities:

Both activities were done writing new ABAP code. No matter if we were talking about a new functionality or a bug fix, the release of this new ABAP code was done in the next R/3 version.

So, R/3 version 4.70 was able to do things that R/3 version 4.5B was not in terms of business requirements met (new functionality). By upgrading the system to a new version companies were able to abandon legacy systems responsible for filling business requirements that SAP was (still) not able to fill. This is really useful because in theory as time passes your system landscape becomes simpler and easier to maintain.

In a similar manner, R/3 version 4.70 was able to do things that R/3 version 4.5B should do but was not doing (bug fixes). Of course, every system has bugs and it’s crucial to fix them to have a more robust system.

However, upgrading the system is not an trivial task. As the software is changed, you have to test it again to ensure your business keep operating without any major issue. A lot of effort is required from different people (BASIS, ABAP, Functionals and users as well). An upgrade projects usually takes some months and in some companies it might take more than 1 year. And SAP knows that since its early years.

To add insult to injury, even thought SAP customers might be happy and comfortable with SAP version they use, they have no option but to upgrade their system from time to time. The answer for that is simple: SAP as any other huge software company, is also responsible for supporting the products they sell until a specific time. That is to say you cannot ask for SAP help your software is really old. You might not know but Microsoft does the same with Windows and the support for Windows XP has gone for some years now. This is part of software lifecycle.

As I said SAP knew how painful and upgrade project was and for that reason it changed its versioning strategy. With the advent of SAP ECC 5.0 (no more “R/3” in the product name from now on) SAP deliveries new functionality with something called Enhancement Packages and deliveries bug fixes in 2 ways:

An enhancement package (aka EHP) is a set of new functionalities SAP delivers since SAP ECC 5. An EHP is represented with a number as well and this number is usually part of the product version. For example:

To see the new functionality provided by each EHP you have to go to SAP Marketplace (so you need an user for it) and then:

When SAP releases a new EHP it explains to the community the new functionalities provided using for example webinars. Unfortunately the documentation of each business function is not ideal and many companies have no idea of what their SAP system could do for them.

This is because each SAP customer have to “activate” each new functionality it wants. This is not the scope of this series but the activation of a business function is no easy task as well. It changes the way the system works and usually this cannot be reversed. 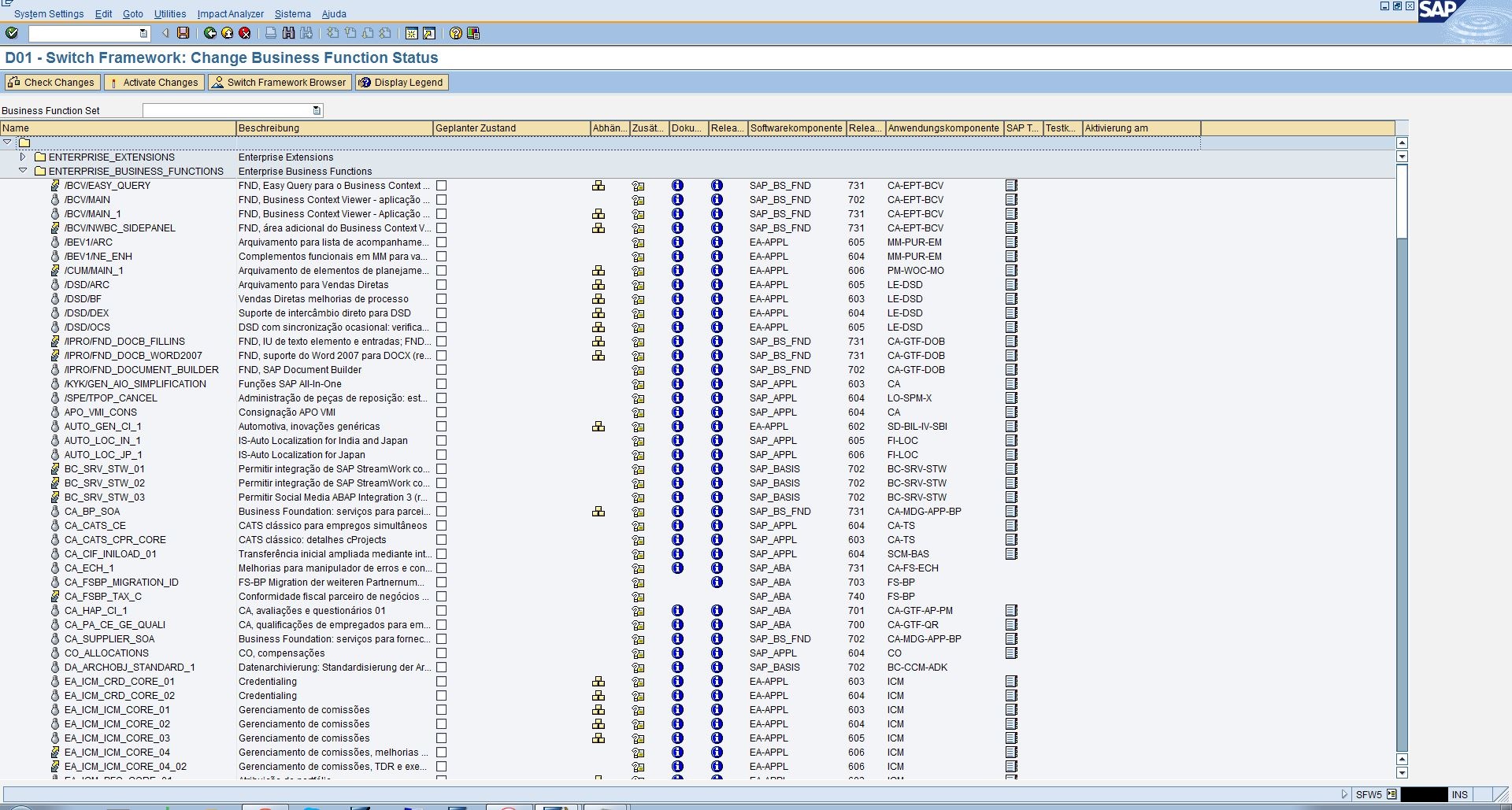 An EHP provides a set of new functionalities (aka business functions). A Support Package on the other hand is a set of bug fixes (aka SAP Notes). Each Support Package is represented by a number and usually it is mentioned after SAP version + EHP, for example6

BASIS professionals are responsible for the application of support packages.

What is the version my company uses?

Open the system and no matter the transaction you are, go to the Menu

A popup will be opened. Then, click on the blue magnifying glass. Another popup will show up. This is the list of SAP software components. Usually you will be looking for SAP_APPL as below. 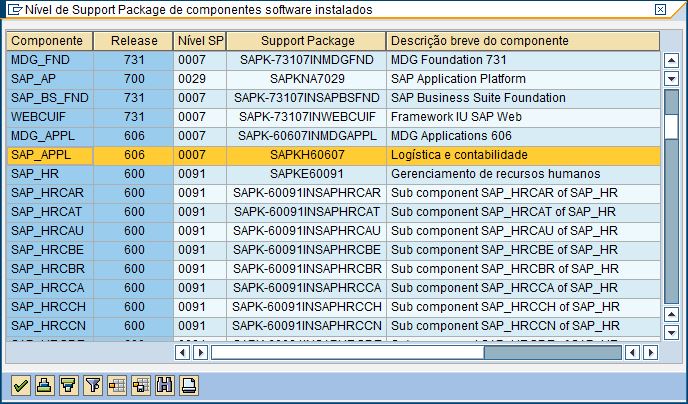 What is a SAP Note?

A SAP Note is (usually) a bug fix on SAP standard code. If you have a problem in let’s say, in transaction VA01, there might be a SAP Note which fixes it. Each SAP Note is represented by a number and at the time this post is written there are more than 1,900,000 SAP Notes.

Where can I see a SAP Note?

SAP Notes can be seen in SAP Marketplace as well but in a different menu path:

It’s also possible to see SAP Notes using transaction SNOTE, which will be discussed in future posts in this series.

Why are they important?

A SAP note is a bug fix, no matter if it’s critical or not. A bug might unable a user to create an invoice and on such cases the application a SAP Note is urgent. A SAP note might also be a documentation about something SAP is currently working on. Then, SAP might provide information to its customers using SAP Notes.

Who is the responsible for implementing/applying them?

Usually, ABAP developers and sometimes BASIS professionals are responsible for applying them. As a SAP Note might be a code change, IMHO ABAPers are more indicated to apply SAP Notes as they can understand ABAP code.

Regarding its application, depends on the circumstance. A SAP Note might have to be applied asap if it is already delivered by SAP at the same time business is being impacted or it might be applied before/after a configuration is done during a specific project.

How they are applied?

They might be implemented automatically (using SNOTE transaction) or manually using other transactions, usually development ones like SE11, SE37, SE24 or SE80. These changes might be in repository objects, which will require a transport or might be in customizing data, which might be transported or not.

We are going to focus on SAP Notes, how to search for them, how to read and understand them. Also, we are going to see Notes pre-requisites, versions and corrections as well as learning how to apply them.

SAP Notes is part of SAP versioning strategy and it is relevant for ABAPers, BASIS and Functional people. Knowing how to use them can save you time fixing SAP product without having to contact SAP and wait for its answer. They are critical for supporting a SAP system.

Do you know any SAP note? What is your experience with it? Have you ever experienced a bug on a standard transaction?

I'll be waiting for the next.

Part 2 of the series is released. Check out below.

thank you very informative blog! I just wonder about the number of SAP Notes - where the no (1,900,000) came from?

Thanks for your feedback. The newest SAP OSS Notes I'm aware of have a similar numbers. So, supposing that SAP started counting from SAP note number 1), yes there are almost 2 million SAP notes created so far.

really interesting I always wonder what number range do they use for OSS (we should call it SMP nowadays 🙂 but old habit is stronger) notes.

When I tried to run search on OSS w/o any key word and language set to English I got following no: 1.482.408

But as you say Notes are numbered in sequence makes sense.

It might be an option but based on my sad experience with this search engine inside SAP marketplace I tend to believe it won't show you the most recent SAP notes.

There are a few other ways to search for SAP Notes in SAP Marketplace. You can search for all Support Packages inside the most recent version of, let's say, SAP ECC 6 (which is SAP ECC 6 EHP7). The newest support package in this system contains should contain the most recent SAP notes and they might have reacher 1900... This number gets higher very fast you will note that.

Very Informative blog and you have done a great job !!!!

Thank you. Don't forget to check parts 2 and 3 of the series.