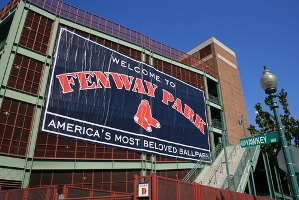 Watching the Boston Red Sox win their third World Series Championship in the last decade, I couldn’t help but think that baseball is tailor-made for the era of social media, perhaps more so than any other sport. After all, in a best of seven series, we can only be absolutely certain of four games. This is precisely what happened in 2004 when the Red Sox swept the St. Louis Cardinals 4-0. As thrilling as these kinds of wins are, there’s no question it crimps party-planning. What’s more, the likelihood of scoring one of the 38,447 spots at Fenway Park to watch the game in-person plummeted fast as the first place BoSox steamed into the fall, even if you were willing to pay $2,056 for the privilege. The good news is that if you found yourself watching the game at home alone, with the advent of Twitter and Facebook, it’s easy to be part of the larger community and feel totally connected to the team spirit.

This year that community spirit has never been more important to those of us living in Boston, Massachusetts. We began the season shocked and injured by the horrific bombings of the 2013 Boston Marathon. But in a city renowned for resilience, the community was nowhere near shattered. One Fund Boston raised more than $60 million for victims and their families. Everyone stepped up to heal in the best way that they could, including the Boston Red Sox.

In so many ways, these players have epitomized the ‘Boston Strong’ rallying cry for the past six months with 470 community appearances. Players visited the injured in hospitals and invited them to special behind-the-scenes gatherings at Fenway Park. Throughout the season, victims, medical professionals, law enforcement, and rescue teams were honored with tributes along with the chance to throw out first pitches.

Yet winning the ultimate baseball achievement in the United States, (and for the first time in 95 years at Fenway Park), wasn’t necessary for the people of Boston to emerge strong in the wake of the 2013 Marathon bombings. What was important was sustaining our sense of community united by a shared purpose. With over 6 million online mentions from fans so far, the World Series helped bring the Red Sox community in Boston and beyond together in a very special way. It only made sense that some of last night’s revelers knelt at the finish line of the 2013 Boston Marathon just a few blocks away from Fenway. Technology will  continue to bring fans and teams closer together and that’s a good thing for communities everywhere.

I agree that if I had not had a self-imposed social media blackout during the game last night, it would have been great to be with friends, even if it was on FB or twitter.

As it was, I made that decision to stay off social media because I didn't want to hurt the feelings of my friends from St. Louis.

The OneFund did a great job with the initial fundraising, but I can tell you it will not amount to much.  I personally know one victim, Mark Fucarile, who was/is horrifically injured.  He only got to go home 100 days after the bombings, and the 1 mil that Onefund is distributing does not do enough for his medical bills.  I wish there were more we could do for the victims.

But without technology and social media, the Onefund probably would not have raised even 1/100 as much - so for that, I am grateful.

One more comment:  Where will you be watching the duck boats from?

You're a good friend to be so considerate!

I totally agree the money isn't nearly enough to compensate for the injuries suffered by so many people like Mark. Each of us has to do what we can to help, even if it's in a small way.

As for my plans on Saturday, I'm studying the Duck Boat route today for the best vantage point.

Stay safe and be strong!