Passing Selection Values from BEx Query to Transformation of the Virtual Provider based on DTP for Direct Access.

The mappings in the DSO can change frequently based on the business need. Huge volume of G/L Data

In order to meet the business requirement, considering the data dependency, the report is built on a

Hence, the mapping from the ‘mapping DSO’ needs to be applied to the transaction data before the report is displayed using a virtual Cube. The Virtual Cube uses the Base Cube as a source and a transformation created between Base Cube and Virtual Cube. When the user executes the BEx report, the business logic implemented in the Transformations is applied to the resultant dataset before it is displayed in the report to the end user.

The below picture gives the Scenario overview: 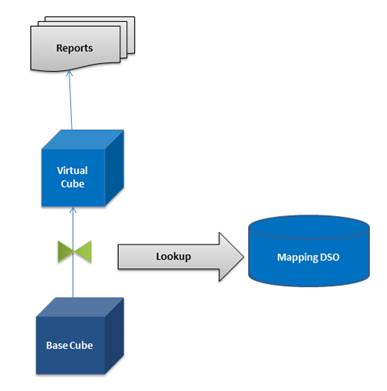 In order to understand the business scenario better, the below example is discussed with some sample data and expected report output.

Note: Sample data provided is only for requirement understanding; it does not contain any data from the client (Actual Data).

Sample Transaction Data in Base Cube:

1.     Passing the Version value entered in the selection prompt of the BEx Query to backend for using in the transformation, between Base Cube and Virtual Cube, for doing a lookup from mapping DSO is not straight forward.

2.     As the value entered at the variable selection prompt of the BEx is used as filter for fetching the records from the Base Cubes, the report output does not display any data because Version is not available in the Base Cube.

In order to address the above technical challenges, below step by step approach is followed.

4.  Approach to overcome the Challenge

In order to overcome the above challenge following steps have been implemented,

Step 1: A DSO is created as shown below. This DSO contains the G/L Account to Base Account & Relationship Type mappings. YYVERSION, which is a date in our case, is used to determine the mappings that have to be applied to the report output.

The structure of the Virtual Cube is as shown below. Highlighted in RED are the characteristics for

Version is added to the Virtual Cube, so that a User Entry Variable can be created in the BEx Query, enabling user for entering the Value for Version of the mappings which have to be applied to the report output.

Base Account and Relationship Type are added to the Virtual Cubes, so that they can be derived from the Mapping DSO, based on the Version entered by the user.

Step 3: Created a BEX Query as shown below, on Virtual Cube from Step 2. The Query contains a Filter for Version (YYVERSION). 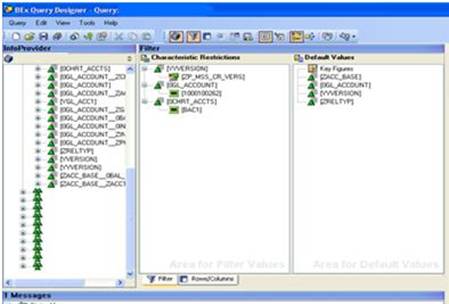 Step 4: The ABAP code mentioned in the Appendix A and Appendix B has been written in the Inverse

End Routine and End Routine respectively, so that the value entered by user for Version is stored in to a

Global Variable. The value thus stored into the Global Variable is used in the End Routine for doing the look up from the Mapping DSO.

Step 5: In the transformation from Multi Cube to the Virtual Cube, the Field Level routine for YYVERSION

is enabled and in the “METHOD invert_YYVERSION.”, a line of code as below has been added. 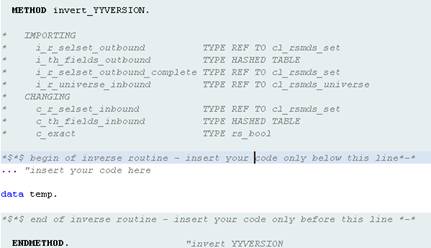 Below test mapping data is used.

The mapping data contains 2 records with different Version, one for 01/01/2001 and  other for

Report Output: The Value for Version is 01/01/2001 and the Value for Relationship Type = FTP

Report Output: The Value for Version is 01/01/2010 and the Value for Relationship Type = FLT

*$*$ begin of global – insert your declaration only below this line *-*

*$*$ end of global – insert your declaration only before this line  *-*

Code in the Inverse End Routine

* Get reference to InfoObject universe

*Get all dimensions (i.e. fields) from outbound selection which are

*and convert to RANGE table representation

* If the exception occurs request all values from source

* for this routine to be on the save side

*$*$ end of inverse routine – insert your code only before this line *-*

FOR ALL ENTRIES IN RESULT_PACKAGE

is there a way to limite the number of fields fetched from the souce.

Meaning, if in my query only gl-account and amount exists.  I only want to fetch the according data, now in my sourcepackage I see all other objetcs getting data as well.