Most people in the United States have been affected in some way by the sorrow of Alzheimer’s disease. They may have had to watch helplessly as a beloved family member or friend’s memories slowly slip away. They may have experienced the heartbreak of their loved one withdrawing and becoming unable to recall happy events and recognize their faces. The personal and societal toll of the disease is huge.

Alzheimer’s disease is described as the death or malfunction of brain cells (neurons) that causes changes in one’s memory, behavior and ability to think clearly. These brain changes eventually impair an individual’s ability to carry out such basic bodily functions as walking and swallowing. Many experts believe that Alzheimer’s develops as a result of multiple factors rather than a single cause. Brain changes may begin 20 or more years before symptoms appear. The disease typically manifests itself in adults, age 65 and older. Alzheimer’s disease is ultimately fatal and is the sixth leading cause of death in the United States.

An estimated 5.2 million Americans of all ages have Alzheimer’s disease in 2013. One in nine people, age 65 and older, have the disease. This number will grow each year as the number and proportion of the U.S. population age 65 and older continue to increase. The number will escalate rapidly in coming years as the baby boom generation ages.

The personal and societal toll of the disease is huge. More than 15 million Americans (usually family members and friends) provide 17.5 billion hours of unpaid care for people with Alzheimer’s disease and other dementias. The financial costs of caring for people with Alzheimer’s and other dementias will soar from an estimated $203 billion this year to a projected $1.2 trillion per year by 2050.

As part of the Big Data Geek Challenge, I decided to analyze several data sets and explore how they relate to the impact of Alzheimer’s disease in the United States. I used SAP Lumira v1.12 and the SAP Lumira Cloud as my analytical and visualization tools.

Data for the project was obtained from the following three sources:

1. Using the powerful data manipulation capabilities of SAP Lumira, I was able to easily prepare, load, merge, and enhance the data from the different sources. The raw data sources were seven Excel worksheets. 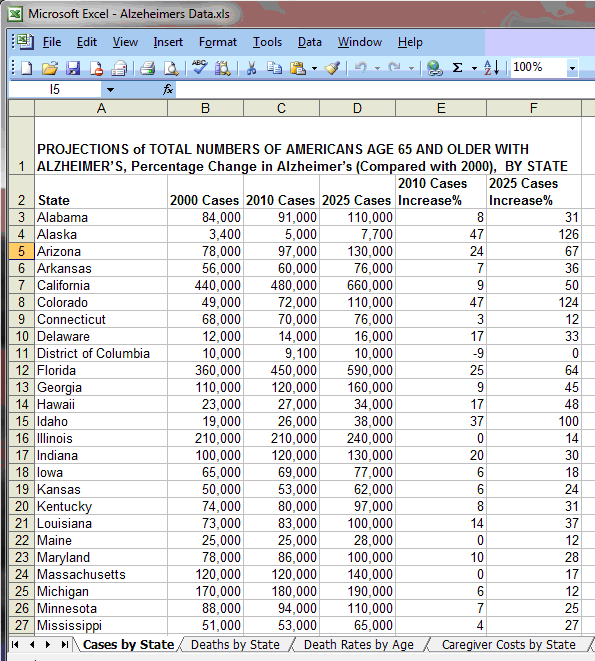 The datasets were loaded into my SAP Lumira document and enhanced using the Prepare feature. Data was merged by State, calculated measures were added, and geographic hierarchies were added. 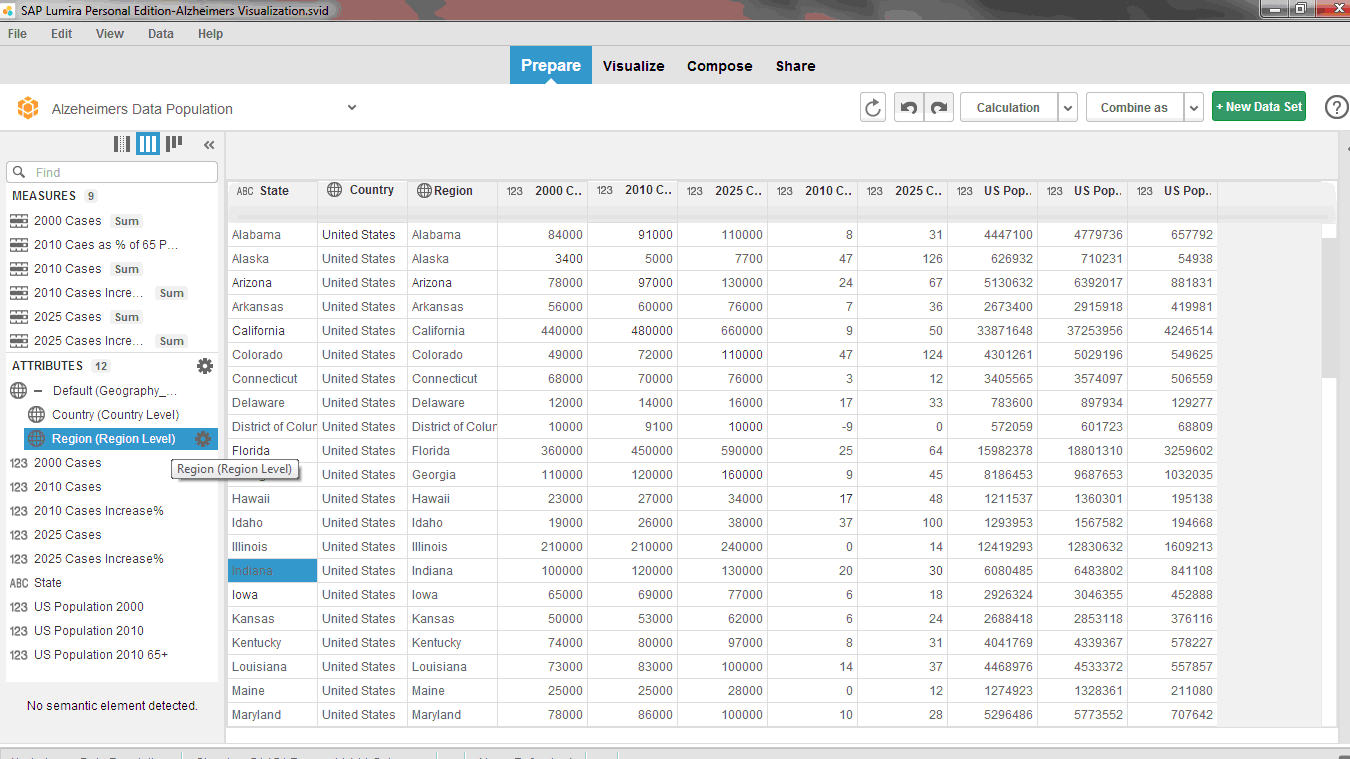 2. I was then able to use the Visualize feature of SAP Lumira to create five visualizations of the data.

The first visualization analyzed the geographic distribution of Alzheimer’s cases throughout the United States. It relies on a geographic hierarchy of “Region” that was created based on State and a calculated measure created for “2010 Cases as % of 65 Population”.

Findings: The distribution of Alzheimer’s cases varies between 8.94% and 18.47%. North Dakota has the highest rate and Nevada has the lowest. 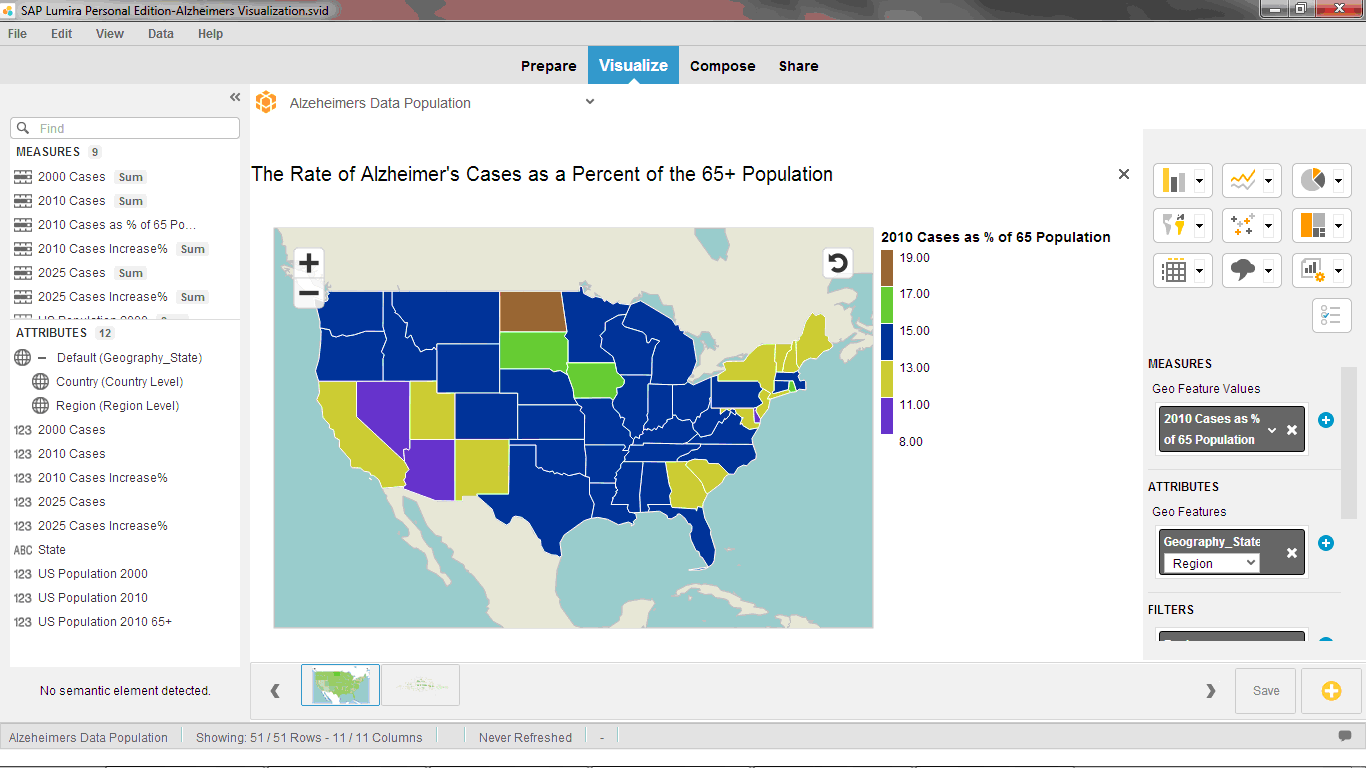 3. My second visualization uses a Tag Cloud to display the projected total cases in 2025.

Findings: California will have a projected 660,000 cases of Alzheimer’s disease in 2025. 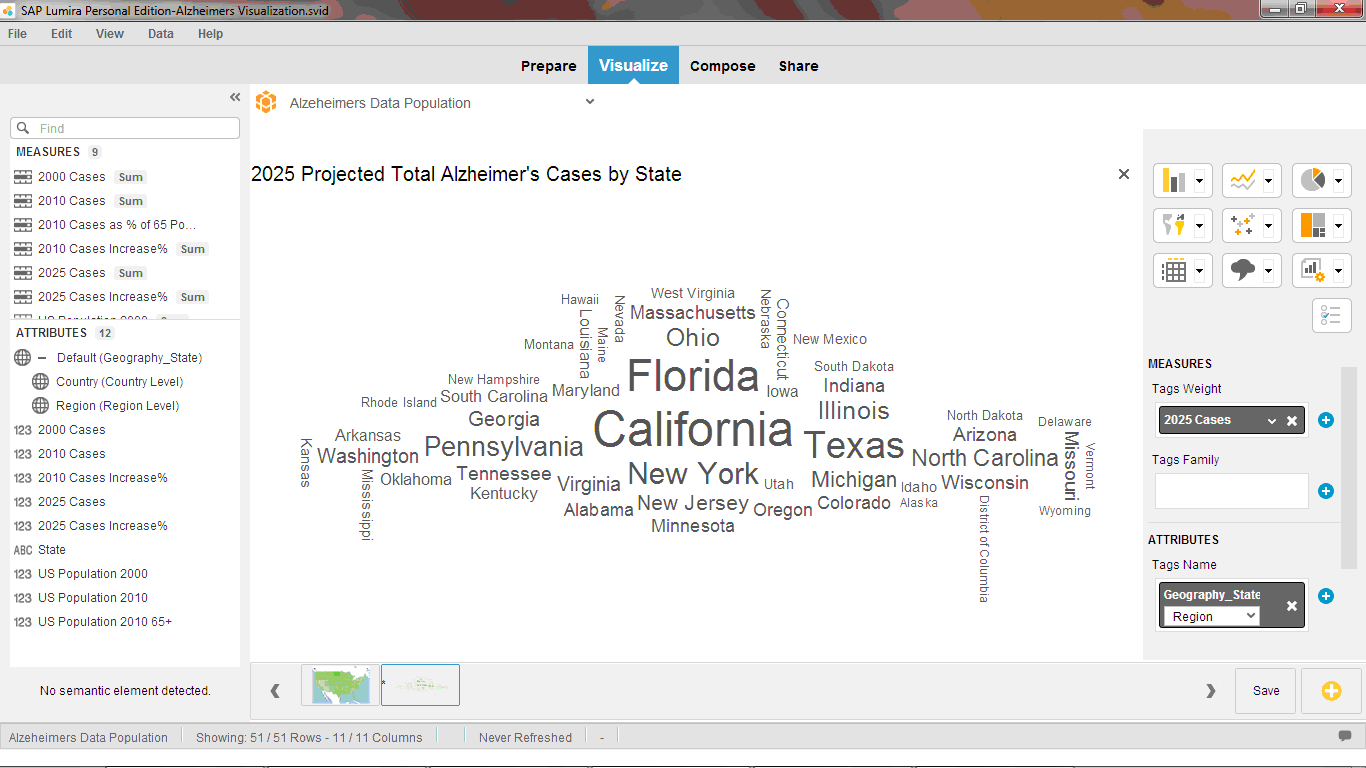 4. For my third and fourth visualization, I was able to use SAP Lumira to merge data from three different sources to analyze the potential effects of a healthy diet and lifestyle choices on a descending sort of case rates. The visualizations make use of line charts with dual axis.

Findings: A healthy diet, obesity, and smoking have little correlation to case rates. 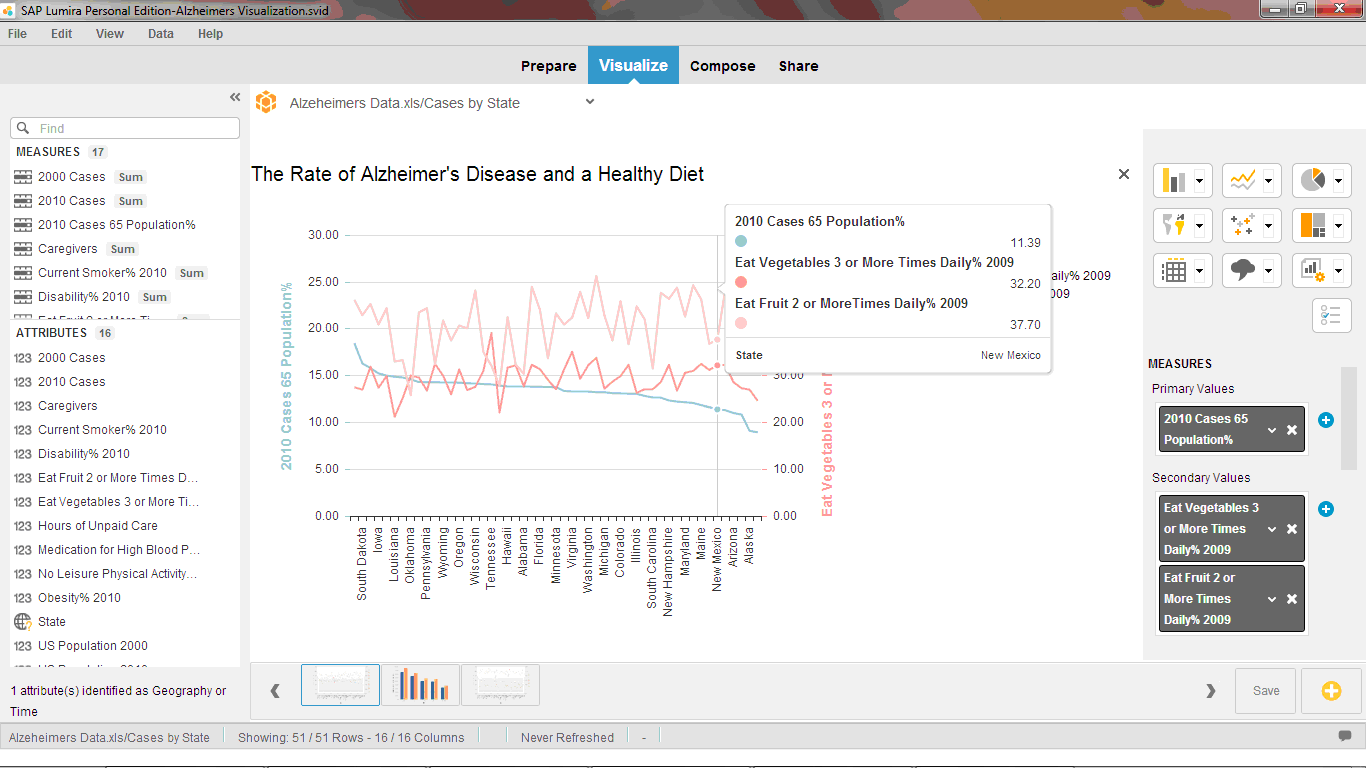 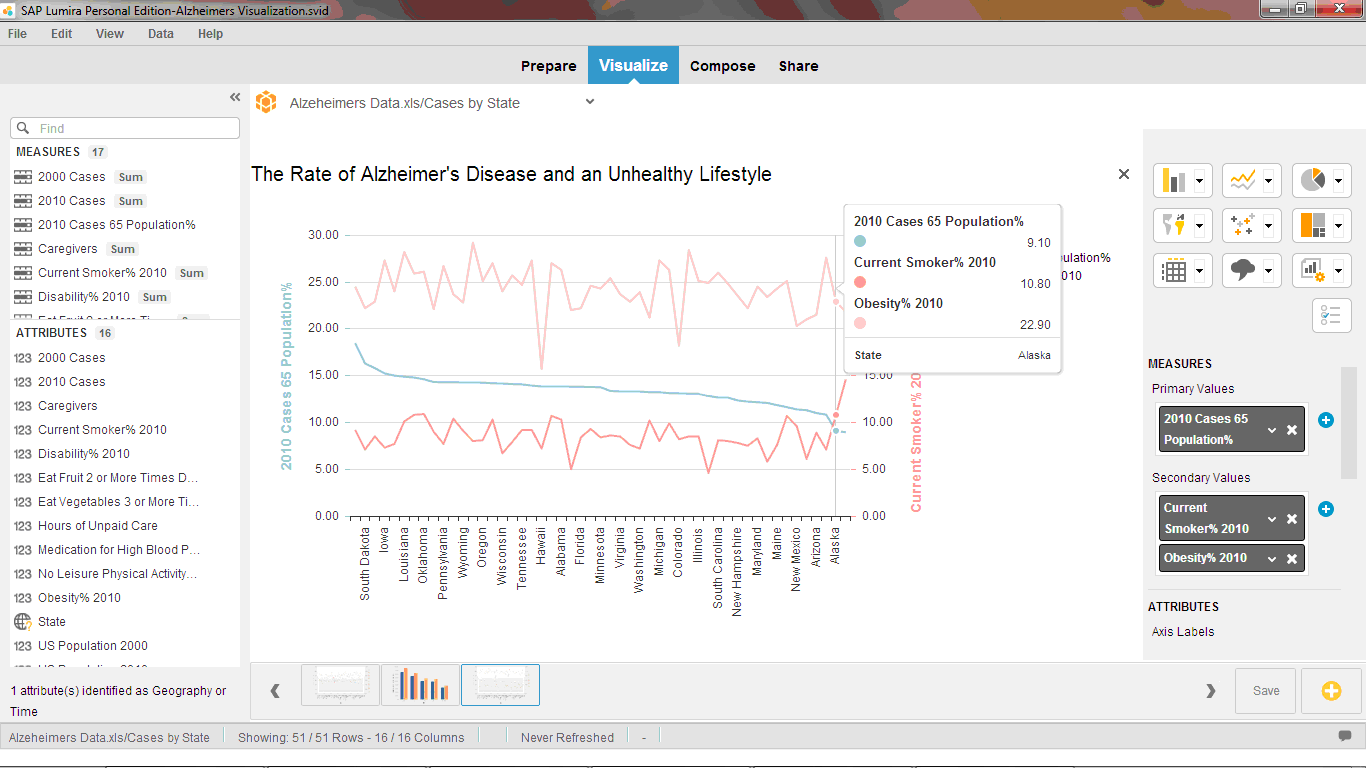 5. My final visualization uses a column chart with multiple measures to analyze the number of unpaid caregivers and the costs (in unpaid hours) to family members and friends caring for loved ones with Alzheimer’s disease. The top five States have been ranked.

Findings: Millions of caregivers are providing billions of hours of care to their loved ones with Alzheimer’s disease. 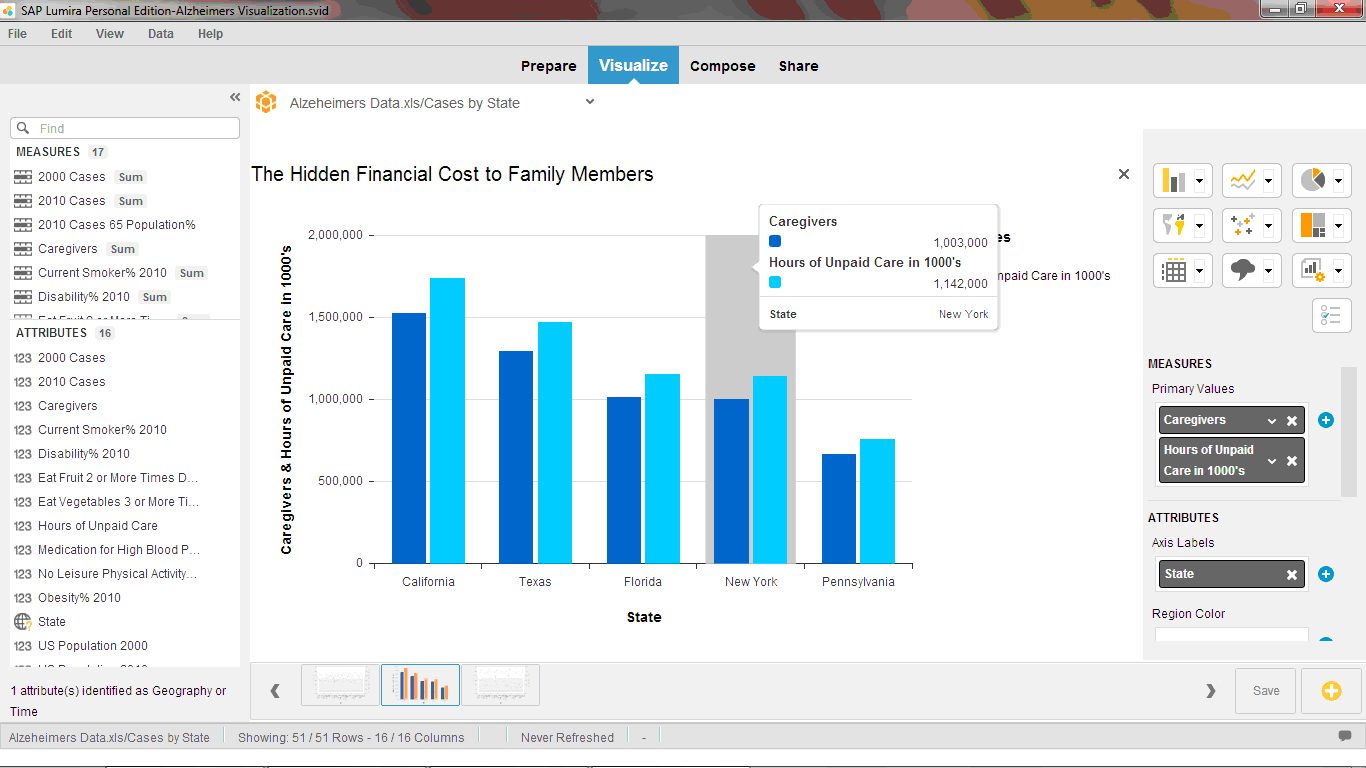 6. Once the visualizations were completed, I was able to use the Compose feature of SAP Lumira to create a compelling story board with my results.The story includes five boards. They consist of my visualizations, text widgets, and a background image. 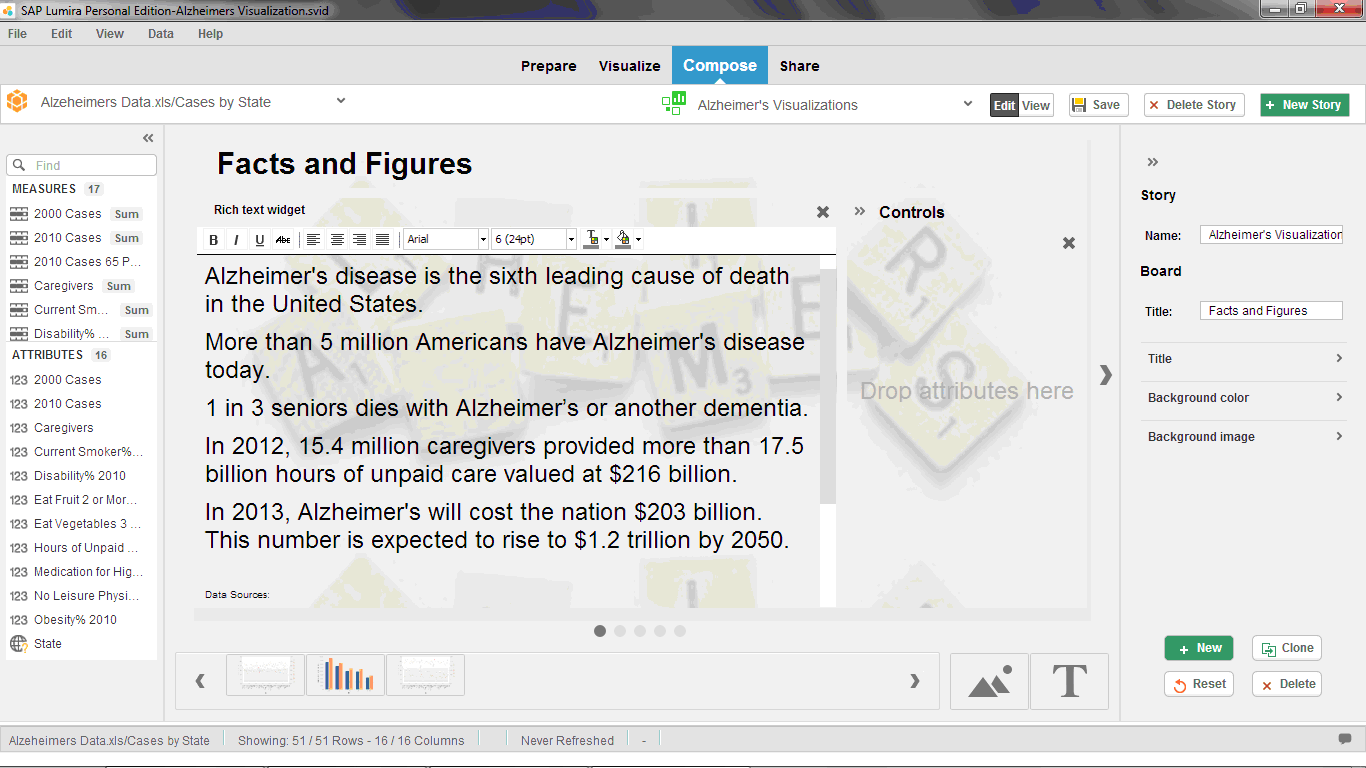 7. Finally, the Share feature was used to upload my visualizations, SVID file, and datasets to the SAP Lumira Cloud. 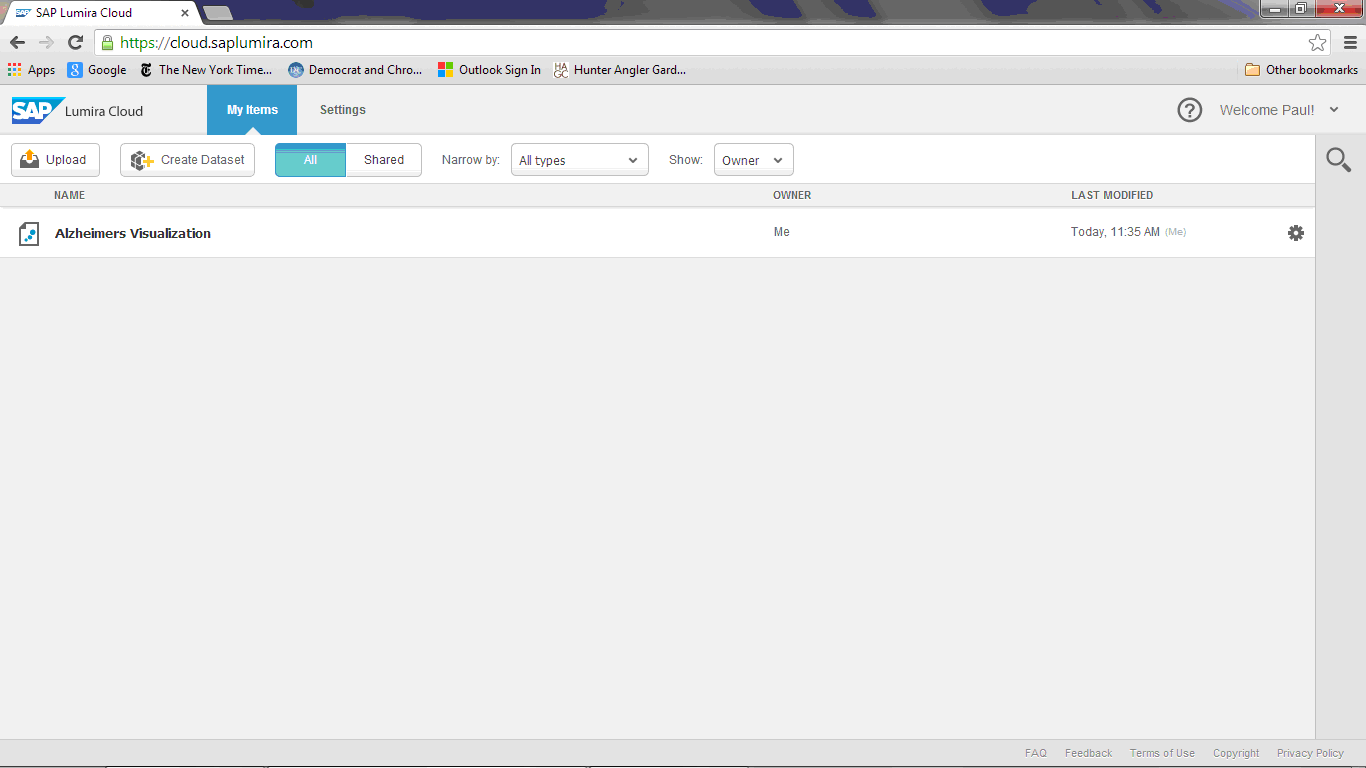 Great work! You can also use SP13 (available for download now), and you can share your storyboards!!!