SAP Lumira SP13 has just been released on SMP today and has a few new features of interest and the “What’s New” readme states the following:

You can now edit the formula used to create a column, without having to create a new column for the modified formula.To use the new edit feature, click the down arrow in the title of the formula column and select Edit.

For example in a formula column combining first and last names, you can now edit this column to add middle names to the column, without having to create a new column for the modified formula. 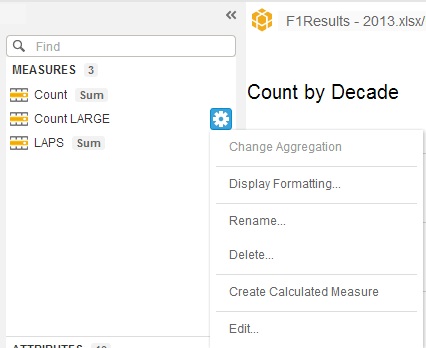 If your Microsoft Excel data source contains one or more named ranges, you can now select a range to apply to the columns acquired for your dataset. A dataset is restricted to the columns defined in the Range.

You select the range from the Advanced Options tab on the new dataset page when creating a dataset from a Microsoft Excel data source. 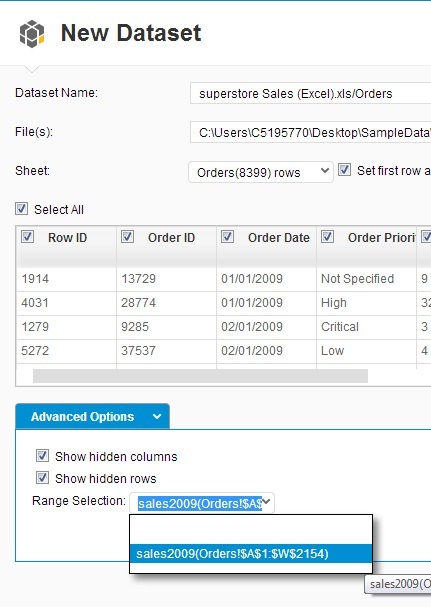 This fixes an issue in a previous version of SAP Lumira. Now all aggregated averages in a dataset are retained when published to the SAP Lumira Cloud.

The transition from SP11 to SP12 was a significant change and as I mentioned in a previous blog was a bold move. I have only played with SP13 for 1 Day and it feels certainly less buggy and a even little snappier.  Initially I felt a little disappointed by this sparse set of enhancements however, giving it some further thought it seams to me that SP13 could be considered a needed stabilization release with a few new features added.

What do you think ?

Another awesome intro to the newest, SP13.

Something to add: The AutoUpdate function will now be fully supported in this release. No more having to go look for updates!

I just heard the auto-update will not work to SP13 until tomorrow; would you please check and clarify?

Thanks Andrew! good article.. right on the money!

Can you confirm on the auto update.

Thanks Mani for your support

I just want to advertize here on the fact that the what's new for SAP Lumira 1.13 is documented here: http://help.sap.com/businessobject/product_guides/vi01/en/lum1_13_0_whatsnew_en.pdf

For official and latest information on data source support, please refer to the Lumira's PAM:

then search for Lumira.

I can confirm Mani's response.. Just did the auto update from my SP12 version to SP13 and works like a charm

@Andrew, great article and the first thing that ppoped up when I type "what is new lumira" in Google 🙂

Thanks for the kind words Merlijn.  Wow, didn't expect Google optimisation to pick up the SCN blog soo fast.

It sounds like the auto update only works if you can get to it through SMP - we purchased from the SAP Store/eStore and it is not working today.  Mani says it will work tomorrow.

What kind of a chart are you making?

What is the nature of the data (text, number, date, hierarchy...) that you are filtering?

Feel free to share your data-set with me (if you can) at irshaad.bijan.adatia@sap.com and cc support.lumira@sap.com

Looking forward to helping you out with this.

Yes great job with the post. I guess some stabilization was necessary. But I hope the development goes on fast.

The development is super fast, we are getting new versions monthly and I hope SP14 is only a few days away.

I heard today that the goal for SP14 is mid to late December.

Thanks for sharing this article.

I have a question. Do you know with which version we can get feature of Sharing Storyboards?

Yep, no problems - Sharing stories from Desktop to Cloud is looking good for SP14 .

however, it has to be clear: the designer/editor capabilities for 'compose story' remain in the desktop client.  sharing can happen between cloud accounts.

Thanks Henry, you got to this before me.

Thanks for the update Henry.

I agree this is a good update for Lumira. Better UI and it seems a bit faster. I especially like the new Storyboard feature. However I am running into one annoying problem.

Since upgrading I created a new document in Lumira but for some reason I’m not able to reopen it.

I get this error:

“An error occurred while reading the document (HDB 00054)”

And the second time I try to open it I get this:

“The workspace is already in use”

Any ideas on what the problem is?

As suggested by Bijan, please open a seperate discussion thread if you can't find a solution for HDB 00054 after searching.

It would also be worth requalifying this issue on SP14 update too.

The other thing I find a bit strange is it doesn't seem to be possible to display currency symbols in Lumira. Most of my Excel spreadsheets include the "$" symbol but when I bring them into Lumira the $ symbol does not display. Maybe I'm missing something but this seems a bit strange, considering how common the use of currency symbols are.

We were discussing this offline through email, and I appreciate you taking the effort to post on the SCN as well. Please remember to follow the rules of engagement, and search before posting.

If there is no post that is already discussing this situation (which there are). Then create a NEW thread, so that we can effectively monitor everything.