The Joys of Being T-Shirt Cannon Fodder

Do you ever wonder what extra-terrestrial anthropologists would think of how we behave? I do.

But few things get me guessing more about what these social and cultural scientists from beyond the stars are noting about us than the t-shirt cannon. The pneumatic launcher of Western civilization’s most ubiquitous garment itself isn’t what captures my curiosity.

It’s the way people in a crowd react to the possibility of catching said garment from the jaws of fate — or at least the clutches of those in neighboring seats.

My first observation of this phenomenon was at a WNBA game years ago. Between plays, people with menacing-yet-festive shoulder-launched apparel bazookas would flood the court, catapulting t-shirts into the upper reaches of the arena. There, spectators jumped, stretched and clawed to get their hands on a $10 t-shirt.

Professional women’s basketball isn’t a contact sport. But competing for a garment launched from a t-shirt cannon sure is!

I’ll spare you everything that I think alien anthropologists might glean from this, and just give you the top three:

“This is such an amazing, amazing opportunity for us to get together in real life this week, and meet the people you spend time with over the course of the year,” Fox said. Then she borrowed a t-shirt cannon from Patrick Flanders and really got the party started.

I don’t know if the t-shirts conveyed wealth, title or even prestige to anyone who caught them. But I do know that the t-shirt cannon helped get the crowd amped for the ultimate developer competition that followed — no matter what any alien anthropologists might think.

Derek still doesn’t know anything about the size, color or content of the WNBA or SAP t-shirts launched from the t-shirt cannons, but you can still follow him on Twitter: @DKlobucher. Like this story? Sign up for the SAP Business Trends newsletter here. 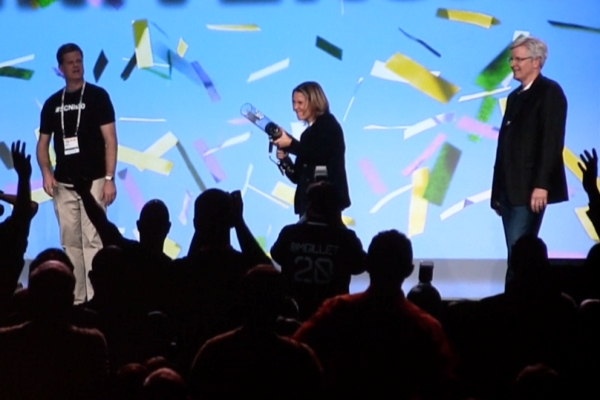 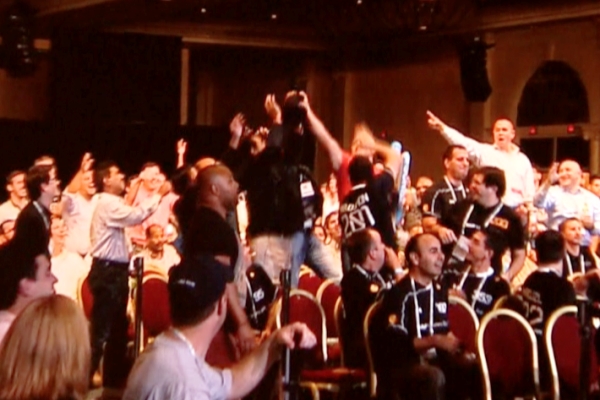 Love this Derek but serious questions need to be asked.....What is the pressure of the cannon?  Did Maggie Fox need to be trained on its proper usage?   😛

Michael, that is a VERY IMPORTANT question. And no training. In fact, I accidentally touched the compressed air hose and it was really cold. The firing of the t-shirt cannon was over far too quickly. I think I need more practice.

Good questions, Michael. The Popular Mechanics story that my blog post links to recommends 40 psi, but I can't speak to the pressure of the device used last week in Las Vegas -- just as I cannot speak to the size, color and content of the t-shirts.

I'll let Maggie and Patrick answer questions about their qualifications with these weapons systems and munitions. But it was a fun night, and no one shot his or her eye out.

In my many years of monk-like studying for t-shirt cannon expertise, it became clear that pressure and parabolic symmetry aren't as important success factors as are a plant-based diet and pure thoughts...which is probably why my shots mis-fired... 😉

Lots of fun seeing everyone and getting the crowed whipped into a froth!

Good luck preparing for next time, Patrick! May your improved diet and mindset lead to an enlightened tao of the t-shirt cannon.

Derek, one perspective you should also consider: that of the person firing the cannon. People were so excited, and honestly, it felt like a big responsibility: I wanted EVERYONE to catch a t-shirt! Alas that would not be possible 🙂

And dare we dream of a t-shirt cannon that can fire multiple shirts at once?

Maybe if the air pressure was 60 or 70 PSI, then the shirts could have made it to the back of the room where the Social Media Reporters were hanging out. 😛   Although you know what they say, "with great air pressure comes great responsibiliy"

Glad you stopped by the SCN clubhouse and the photo booth so we could get yet another opportunity to meet you un-virtually or literally or IRL( in "real life").

Enjoyed this recap enormously and your sense of humor is quite delightful. You do make some very interesting observations about human behavior.  Funny how it works in reverse order in some contexts (audience throwing things at the actors on the stage in Shakespearean times or roses at the opera stars up to the present....Guns and Roses??) For years I wanted to do a "flash mob" and startle the audience into a sense of excitement and fun during TechEd.  Of course, my original evil plan included doing that during a keynote (with permission of course) so I was delighted that Jeanne Carboni Patrick Flanders Krysten Bradley orquestrated fun that even the execs participated in .....and yes the audience was amped.  In the past that was based purely on a skilled showman getting the juices (and beers) flowing.  What was very interesting in this case is that women where very active in this testosterone charged activity too 😈

Thanks, Marilyn! IRL meet-ups are always a highlight for me at SAP events.

That's an interesting angle about audience members throwing things on stage. I'm grateful that no one threw garments back on stage at SAP TechEd, as fans were known to do at Tom Jones concerts.

I love your flash mob idea. I cannot wait to see how you guide its evolution at future events!

All true. Can only expect we get this next year thanks to SAP and the NBA...

Great blog! I too have witnessed this firsthand. I have been struggling....trying to come up with a name for the sudden affliction....what is that "thing"/feeling/virus called that overtakes one?...you know what I mean..from the time you see the t-shirt cannon, and you sit there in your seat thinking "ah I don't need another t-shirt...hurry up and get on with the program" to that sudden "I NEED THAT T-SHIRT!!!!" feeling that launches you up out of your seat, jumping around, waving your arms like a manic and screaming "ME! ME! ME!!!! SHOOT ME!!!" ...yeh what is that? 😛

Thanks, Christopher! I'm not sure that this acute condition has a name -- yet.

Perhaps we'll have one by the next SAP TechEd in Las Vegas. It's too bad that "delusional projection" is already taken.

great blog.. sadly I had to pass on the opportunity to jump after a tshirt 🙂

I have heard of legends of people like you, Martin. Those with the inner strength to resist. Those who look at the t-shirt cannon and laugh... WHILE SEATED! Sorry to say, Martin, but we must now dissect you so that medical science can discover what makes you so different. Thanks for your sacrifice. 😛

Even ET anthropologists will like that some on the other side share their views 😀 Humans can get weird!! 😛

I cannot argue with that, Karuna!

I like it . I love to grab T-shirts whenever and wherever they are thrown 🙂

Does that include however they are thrown, Kavindra? I forgot to mention in the blog post that people on the floor -- including SAP Business Trends' own Christopher Kim -- were also throwing t-shirts by hand.

Love this blog post, and thanks for validating that this was great fun for everyone, including those of us on the stage who were launching the old fashioned hand-tossed-T's. I'm now working out with a focus on arm strength so that I can lob a few shirts to the back of the room.

By they way, they were all Large or X-Large, black with #SCNis10 on them, as well as the SAP Community Network logo.

Clearly we need an automatic T-shirt launcher for next year that provides rapid fire action.

Thanks for posting this!

Wow! I'm impressed that you're training for next year, Jeanne!