The feature VDSK1 is used for determining the Organizational key for the Personnel Number while performing some action on that involving infotype 0001.

T-Code for Feature is PE03

Documentation for the Feature: 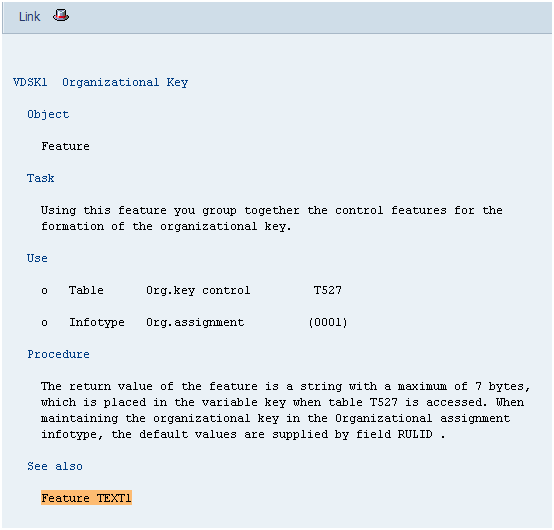 Decision Tree for the feature: 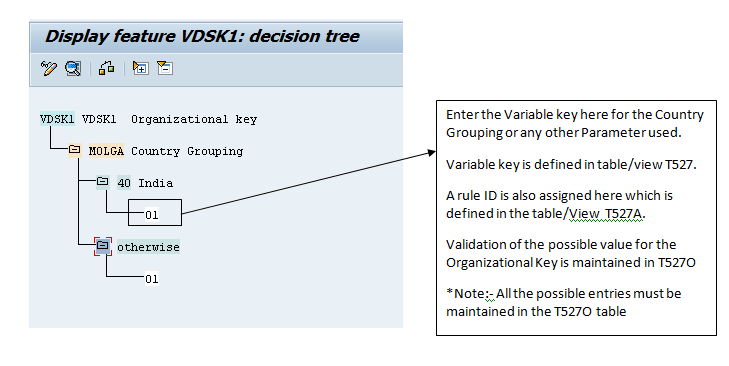 Which are self descriptive enough.

As illustrated in screen shot for T527 the rule ID assigned to Variable key is DD which is maintained in the table T527A as below:

We have 5 Fields in this table/view.

2) Seq No : Sequence to be followed if more than one entries are maintained for any rule.

3) Field Name: It will contain the Filed Name from the Infotype 0001 which will be processed by the feature based on the Rule ID, Seq No, Length and Offset.

4) Length: Number of the characters you wish to be used for the specified field

Now if we maintain all the possible entries in T527O and enter DEV in the feature VDSK1 under the decision parameter the Rule DD will be processed in the following way:

PA0001-BTRTL will be read and its first 4 character will be considered. As length is 4 and offset is 0.

2) The rule will then look for next higher sequence number for the rule DD. As per my example illustrated above PA0001-WERKS will be read and its first 4 characters will be considered.

3) When highest Sequence Number is processed. Then all the Considered characters like in Step 1 and 2 will be concatenated in the respective order and passed to the Organizational Key field of Infotype 0001 when ever some Action is run on that employee involving IT 0001.

*Note-All the possible entries should be maintained in the table/view T527O if validation is used.