Sunday, October 20, I landed in Las Vegas with my usual (overwhelming!) list of people to see, things to do, and lessons to learn.  A wee bit worn from the 6 hour flight (no sneering from the Aussie contingent please; you chose to live where you live) – I decided some quality time in the room was the first order of business… unpacking, checking email, even ironing a few things.

The rooms at the Palazzo are quite nice.  They ought to be, since coffee is not included.  This, to me, is a crime against nature – are we actually expected to show our faces in public in order to get coffee, or to order it from room service and no doubt pay $20 for weak stuff?  (but I digress).

The bathtub is huge, and if you get all achy after a day of lugging your 10 pound laptop around, and hoofing it from the hotel to the convention center and back multiple times, then the tub is really something to look forward to.

Next order of business, I had hornswaggled the honest-to-goodness true workflow goddess Jocelyn Dart into giving the soon to be infamous presentation ‘Which Inbox and When’ and I owed her some gelato.  Hey, it’s the least I could do.  We agreed to meet up in the lobby of the Palazzo, and who should we run into?

Ha, fellow Aussies Graham Robinson and Douglas Hay were meandering through the casino with luggage in tow. 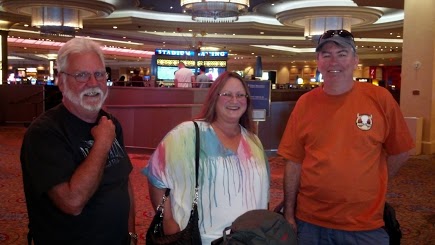 Jocelyn and I enjoyed a nice gelato by the venetian canals, particularly the gondoliers who were serenading their passengers.  We headed back in, and were again graced with the presence of Graham, and my good friend and fellow ASUG volunteer Karin Tillotson.  We dined at some Italian restaurant – there is certainly no shortage of those between the Palazzo and the Venetian! – and retired to the infamous Zebra bar for some libations.

Fortunately, it was an early night for all.  This was only Sunday, and as Graham pointed out, it would be a shame to peak too soon in the week.

Monday I had planned on going to Innojam – but my plans went awry (this will be a common theme throughout this blog series) because of real-world fun.  There were some things left undone back home, so my Monday was mostly spent trying to set them right.

I did find time to get over to the registration area – which went very smoothly.  There were a lot of badges to choose from for sure, but two of my favorites were these:

The #Suithugger is a favorite theme for many TechEd attendees – perhaps this was started by Chris Kernaghan at a prior TechEd? The reason for this is because many execs will show up at TechEd in suits, and hey, that’s the way they dress day in and day out, so we can’t hold it against them.  Executing a well-timed (and not unwelcome!) #suithug let’s them know that we embrace them literally and figuratively in spite of the formal attire.    And actually, I did get in one of the very first #suithuggers when I found Steve Lucas aimlessly wandering the convention center halls, but alas, I have no photographic evidence to prove my claim.

Monday night, Nate Silver of 538 fame gave the keynote address. I confess I never thought I was a data geek, but Nate could have persuaded me to convert.  Fascinating discussion of the signal and the noise, which is also a book by Nate. 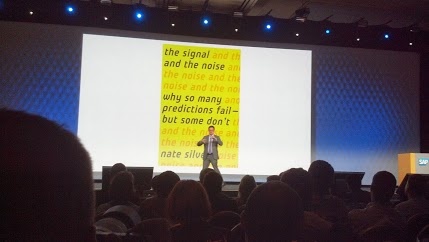 After the keynote, there was a panel discussion on Big Data with Steve Lucas and Irfan Khan  – which left me almost out of gas, ending at about 8:30.  But wait, the night was not over yet!

I have the honor and privilege to serve as an SAPMentor, and we had a reception following the Big Data reception at which we were able to spend a little timegetting to know the newest SAPMentors and reconnect with the rest of the pack.  Mark Finnern did his best to control the unruly bunch, and I am still waiting to learn the results of our crowdsourced poetry.    New shirts were distributed, as well as the formerly mentioned Flashy Blinky Lights.  This year, I gave two lights to each mentor – and asked them to ensure that they gave one away to somebody they made a connection with.  I hope somebody reading this blog will let me know if they were ‘Touched by a Mentor’.

On Tuesday, the conference begins in earnest, with keynote by Vishal Sikka.  So much to look forward to!  (even though these blogs are written in retrospect)

Thanks Eduardo!  Were you at TechEd - or will you be at one soon?

BUMMER.  Next year, then.