I recently had the opportunity to spend some time with Professor Rolf Hichert. For those who might not be familiar with the professor, he is one of the top visualization gurus. The information he shared with me is relevant to so many organizations that I decided to share what I learned in a two-part blog series.

In my next blog, I’ll describe in more detail the actual methodology and visualization standards that Professor Hichert has defined. These have been adopted by a long list of global companies that include German Telekom, the Swiss post office, and the German military. For now, I want to focus on sharing some of the key things I learned from speaking with Professor Hichert about how you can benefit from his almost 30 years of business intelligence (BI) experience.

Just imagine you’ve moved into a new, completely empty apartment and you’re standing in Home Depot trying to choose the pieces you need to put together your kitchen, office, and other rooms. Then imagine that instead of  Home Depot, you’re in IKEA, where you see thoughtfully put together examples of various rooms where the pieces all work together to create a harmonious look and feel. Certainly starting with IKEA is going to save you a lot of time and energy.

Your organization should use the  same sort of rationale  to decide upon using a standard visualization framework. In dashboard design, an enormous amount of time is consumed in order to make all the little detailed choices necessary: What font size? How big should the spaces be between the columns? What format should the title be in and what information should it contain? What color should be used to indicate different categories such as budget, actual, and previous years? How much space should there be between two charts? How should the measures be defined and laid out? In Professor Hichert’s framework, there are literally hundreds of little rules. 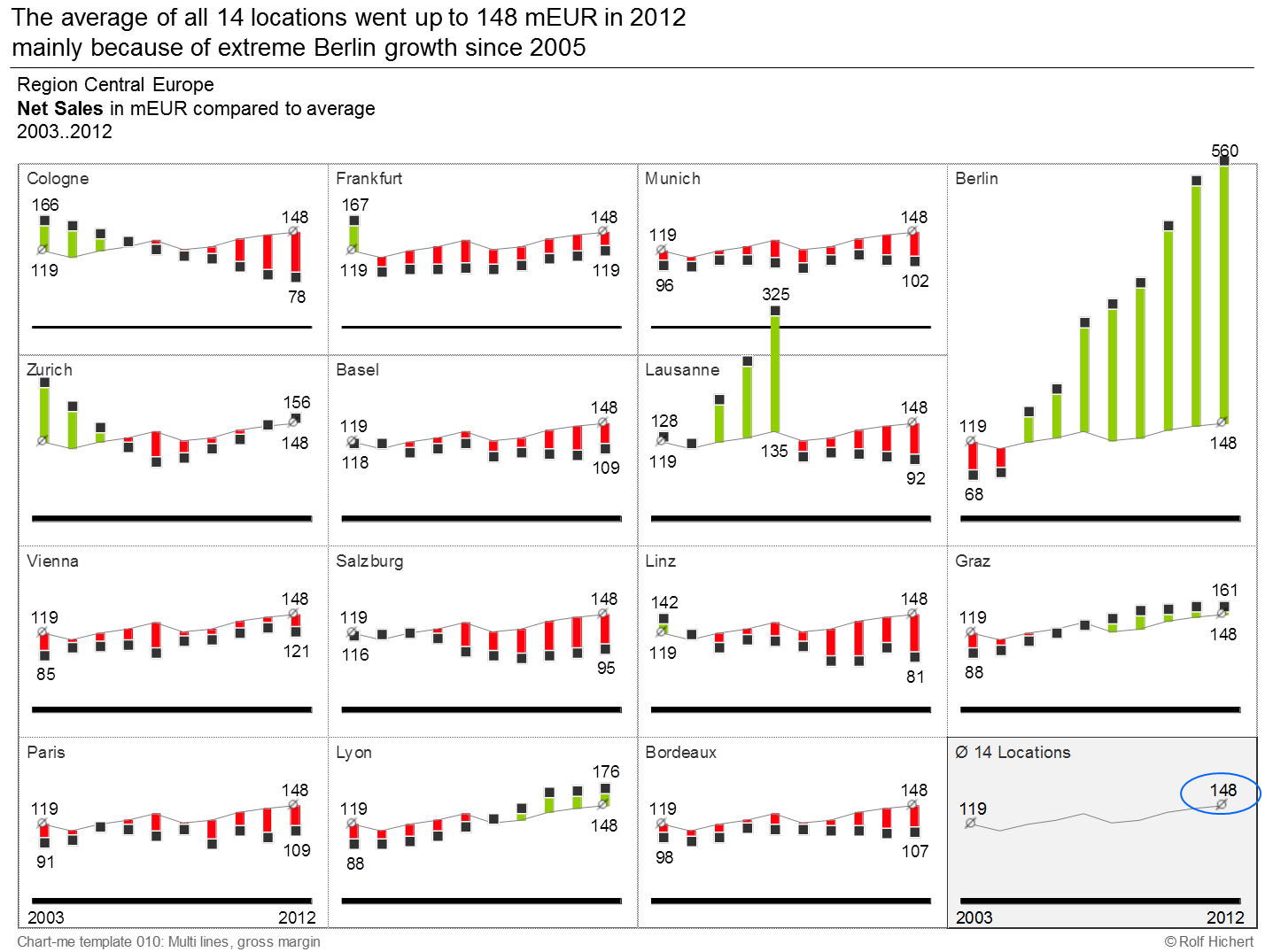 Avoid Reinventing the Wheel to speed up your Project

A lot of business intelligence and dashboard projects fail simply because they take too long to complete – before you are finished, the management or the strategy change and suddenly you’re back at square one again.

You can improve your odds of project success by using a standard framework to eliminate many of these decisions and the endless discussions around shades of color, and so on. Don’t reinvent the wheel with each new project. 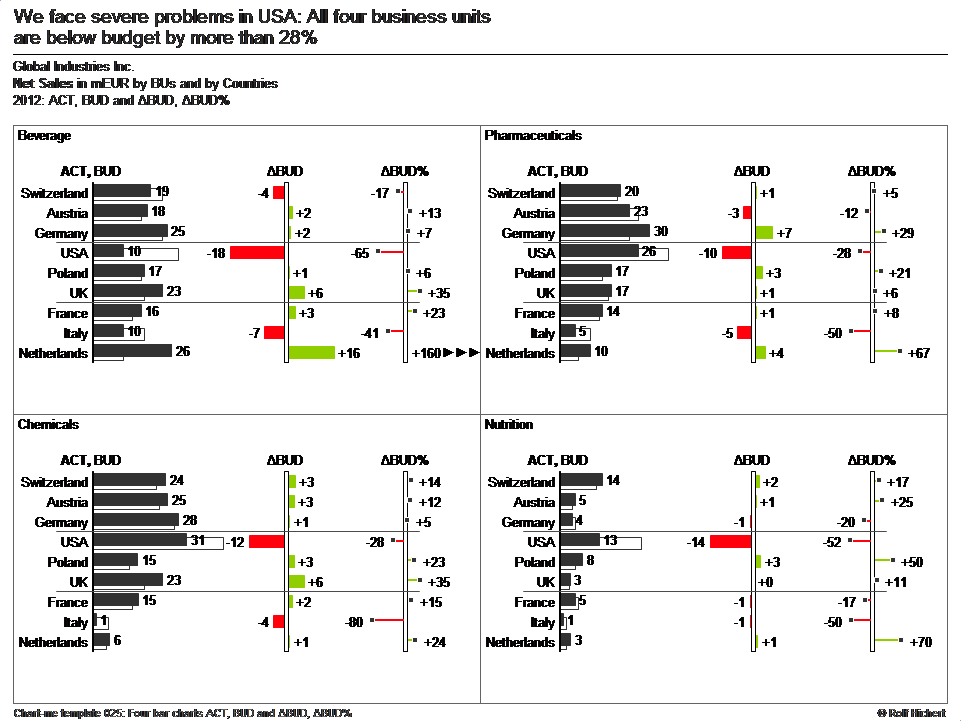 Example 2: In addition to example 1, this dashboard demonstrates these features: Notation concept with black for actuals, outline for budget as well as needles and bars for the different variances; Clear titles and labels; Consistent scaling

There are additional benefits when an entire company standardizes around one set of visualization rules – it creates alignment along measures (sales, costs), dimensions (regions, time), analyses (average, rank), and others. Each measure has a common definition at the corporate level, and by using a common set of visualization standards, users throughout the company will learn to recognize and grasp the meaning very quickly.

Sales will look the same no matter which country, which division, or which year. It’s like a piece of  sheet music. The notes for each song are unique (as is every company’s numbers), but music sheets can be read easily by anyone with training since it’s laid out by certain rules. You can’t change the number of lines on the staff or invent new ways of showing one beat or four beat notes.

So rather than reinventing the wheel and spending numerous sessions with your business users trying to define the dashboard layout, your organization can optimize business intelligence projects by adopting visualization standards such as Professor Hichert’s. Some of SAP’s key customers are already doing this very thing with Hichert’s SUCCESS methodology. 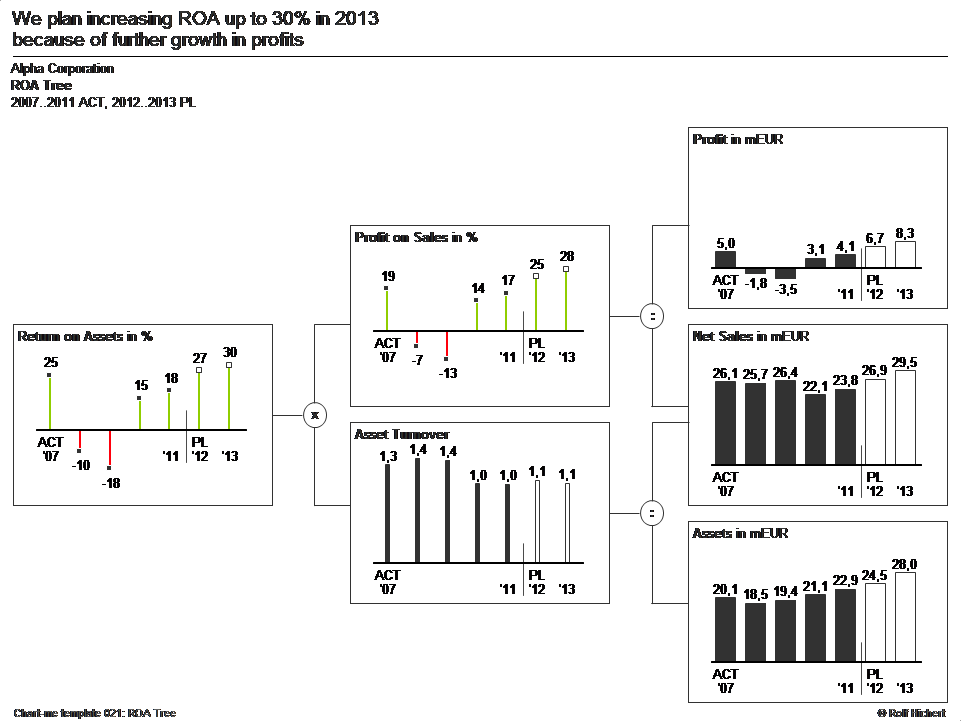 Example 3: And here some more aspects of Hichert’s concept: Three different visualizations for three different measures; Minimal color to focus on the red and green deviations

Stay tuned for my second blog, which will go into Professor Hichert’s methodology in more detail and show you some before and after examples.

In the meantime, you can get familiar with our partner graphomate. They do add-on charts for SAP BusinessObjects Dashboards and SAP BusinessObjects Design Studio following Hichert’s visualization methodology. These are available in the SAP Store and you can watch this short video demo to learn more.

You really had a deep thought on the subject matter, and put light on it in a very unique style. Great effort.

Creating a Successful BI Solution that is Used Enterprise Wide

If we were to start a Dashboard Creation project now and our source is all 4.1 Universes(UNV), which SAP tool would you suggest for dashboard creation in which we can incorporate all such best practices of data visualization such as Prof Hichert's methodology and/or Edward Tufte methodology?

I would look towards Design Studio + graphomate for the Hichert charts. The universe access for Design Studio has come a long way. You can of course implement a lot of the best practices without going to the full graphomate add-on but not full compliance.