VIDEO: #DemoJam Boldly Goes Where No #SAPTechEd Has Gone Before

Each team had to demonstrate its app in six minutes — no more, no less. And the TechEd audience determined the winner.

“We’ve all been to sporting events, and know the problems of waiting in line,” independent consultant Doug Munford told the crowd during his presentation of Crowdify. “Everyone seems to go to the bathroom at the same time you want to.”

Munford and graduate student Adela Calin demonstrated how the app crowdsources ways to avoid queues for toilets, concessions and more at sports stadiums and amusement parks. Unlike others, Team Crowdify earned its spot in the competition by winning InnoJam on Monday.

Next, Paul Aschmann of Lithium Labs demonstrated Metric² for SAP HANA, a real-time dashboarding platform for SAP’s flagship in-memory platform. In effect, HANA powers the app in order to monitor itself.

SAP’s Ethan Fan teamed up with getpebble.com’s Asad Iqbal to show Pebble CRM, which integrates the Pebble smartwatch with SAP HANA and cloud technology to make CRM more efficient. But the audience didn’t cheer loudly enough for these three teams to survive the first round of voting, and they were eliminated.

And Then There Were Three

“There’s an inherent health hazard in being a geek because we sit on our butts all day long,” Greg Myers of EV Technologies told the crowd. “So we exercise — and what do geeks do when they exercise? — they want to slap a gadget on everything.”

Myers and his fellow self-proclaimed geek, SAP’s John Astill, ran through their app Quantum Fit — almost literally. Astill ran on a treadmill to demonstrate how the app unifies live data streams from any fitness gadget the wearer chooses.

Felipe Chirinos of GrupoASSA created Drums Analytics to show what SAP HANA could do for his retail and manufacturing customers by combining the transactional and analytical worlds “in a simple and cool way.” The system sends every beat of every drum and cymbal to Chirinos’ laptop and an SAP HANA platform, which graphically renders the performance.

But it was the enterprising duo of Will Powell and Nic Doodson from Keytree Ltd. who won Demo Jam by boldly — and virtually — going where others had gone before. Their HANADeck is similar to Star Trek’s holodeck in that users can virtually visit faraway places and experience them under real-time conditions, thanks to sensors left behind by the aforementioned others.

No doubt HANADeck would be an app with which even the crew of the USS Enterprise (NCC 1701-D) would want to — yep, one last pun — engage.

Be sure to check out my DemoJam video, which jams the 90-minute app-fest into three minutes.

How to Get Your Hands Dirty at #SAPTechEd 2013 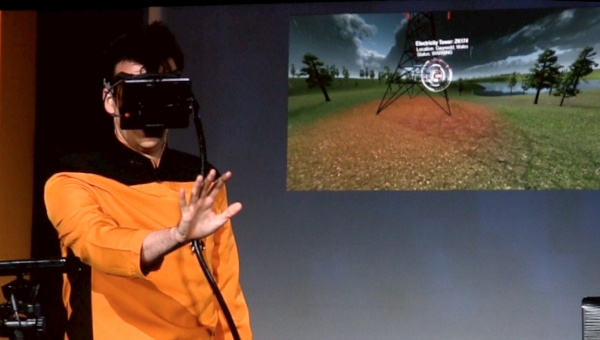