The Red Shirt Day at SAP TechEd (AKA Day Three)

Today I’m wearing a red t-shirt to liven up the black-white-and-gray TechEd landscape. By 10 am I count 7 other people wearing the red shirts, although none of them is a match for my intense “fire truck red”. They’re more like maroon, come to think of it, so I’m claiming “the best and only red t-shirt at TechEd” title for myself.

It’s my lucky day because the first session I picked starts at 9 am. However, the breakfast from a mystery continent runs only till 7:45 am, which leaves me with an unpleasant dilemma of food vs. sleep. I decide to bite the financial bullet and sleep in to pay exorbitant price for a breakfast at the hotel’s cheapest restaurants later. Judging by the tags and shirts, sleep also prevailed this morning for many other TechEd participants.

We’re still a bit low in the smile department at TechEd here, so at breakfast I come up with a list of ‘Top reasons to enjoy TechEd’:

What? I did say “hypothetically”. 🙂

The first session on SAP Mobile implementation by Wabash National goes very well. It’s good to hear a specific use case and sometimes not so pleasant things that might happen with any implementation. Well done.

I stop by the restrooms and something strikes me as incredibly strange. There is a big line for the men’s room but no line whatsoever for the ladies room. This picture is almost surreal.

Even though I had to leave a bit early from the session ‘ABAP 7.4 News’, I believe it’s safe to declare that there really are no ABAP news per se. The only piece of information that could pass as “classic ABAP” was that now instead of READ TABLE …. INDEX 1 we will be able to use something like itab[1]. Oh-kay… And rather dry reading from the PowerPoint presentation made me reminisce again about the good old days when ABAP news were delivered by people like Thomas Jung who gave a damn about it.

Fortunately, the next session about implementing REST API by fellow Mentor Sascha Wenninger (featuring Custodio de Oliveira – or I’ll let him and Sascha to fight over who’s featured whom 🙂 ) is almost the exact opposite and wipes out the unpleasant ‘ABAP news’ aftertaste like a stick of Doublemint. I might not fully understand who the heck is that Jason guy everyone keeps talking about and why is he resting all the time, but even that didn’t make it less fun. 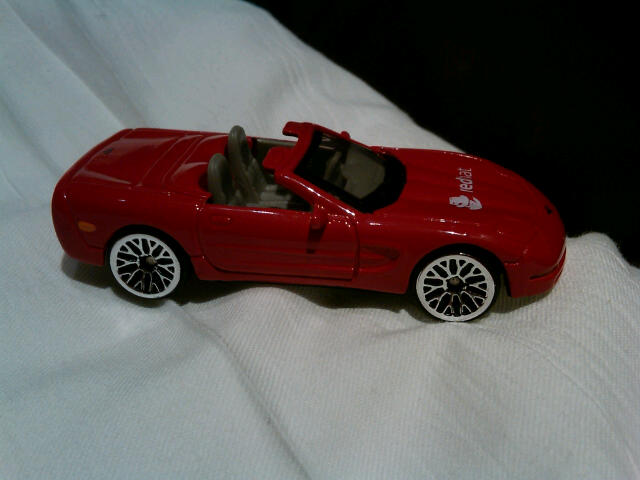 On the way to lunch (by the way, I’m getting a real workout here – it takes forever just to walk from one room to another, this place is HUGE!) I cruise the exhibits again and my eagle eye spots today’s nominee for the cutest TechEd swag – a shiny red toy car from Red Hat. Red car to go with my red shirt – jackpot!

In the afternoon I have a 4 hour long hands-on session on Web Dynpro and Floorplan Manager. Let me tell you a bit about those sessions. You come to the designated room, say, 10 minutes earlier. There is a big line in front of the room, so you just assume the room is not ready yet and join the crowd. Then someone yells that it’s the last call for the registered participants. You didn’t hear any previous calls, so you rush to the entrance almost pushing people aside. The entrance is guarded by two very serious ladies who make an average night club bouncer look like a pink teddy bear. And they better have you on the list, because otherwise you ain’t getting there. But what’s with the big line, you say. That turns out to be “the waiting list”, analog to the “standby” airline passengers. Which leaves you with a knot in the stomach because this is so much not what TechEd should be about. 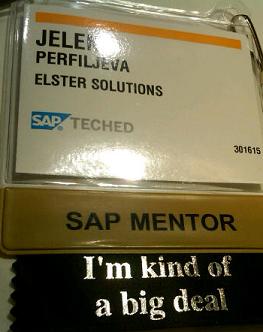 We don’t run into any connection problems like the day before, but the handouts are only about 50% correct. Or 50% wrong, depending on the way you look at it. The screenshots don’t match what we see on screen, some pieces are missing, and some steps are taking us in a wrong direction. After a while it feels like we’re painfully trying to solve a puzzle without knowing what the whole picture looks like. The presenters make an effort to explain what we will be doing before we start the actual exercise, but at least for me not only WebDynpro is new but it’s also a new development environment, so that doesn’t quite cut it. (And let me tell you that this Eclipse thing gives the whole new meaning to the words “not intuitive”.)

After three hours into the session we throw in a towel and call for help with one particularly strange step that instructs us to choose an object from the dropdown but the object does not exist. An instructor arrives, hears our case, then flips to the previous page and points to the explanation of the step that we’re creating this object, therefore [duh!] it does not exist. And that’s why he pointed out to us [dummies] that we should really think what we’re doing. At this point I feel extremely tempted to raise an eyebrow and say: “Excuuuuuuse me?!! Do you know whom you are talking to [Exhibit A on the left] ? I’m soooo telling on the lack of empathy here!”. But instead I just mumble sarcastically “…or maybe someone should’ve just checked the screenshots”. We somehow complete all the exercise steps, the program runs and… it doesn’t work. At which point I leave with a headache from hell.

In conclusion – there should be only red shirts on TechEd, not red tape. Clearly hands-on sessions are very popular. But this is an IT event. “Hands on” is what we do. Get someone to check the handouts. Bring in more chairs, let it be 3 people per laptop – if it’s not an individual exercise than the number doesn’t matter much anymore, the more the merrier. Make the sessions shorter (which they would be with the better handouts), 4 hours is way too long in this age of short attention spans anyway. Set up a class for quick practice before the sessions just to get familiar with Eclipse. (In real life – how many developers open an unfamiliar environment for the first time and immediately start coding in it? OK, without Thomas Jung. None?) Record some videos to watch before the session. Do something. Otherwise it’s neither “Tech” nor “Ed”.

P.S. I’m also claiming for myself the title for the largest number of Thomas Jung references in a single SCN blog.

P.P.S. Coincidentally, I will be on TechEd Live together with Graham Robinson and Thomas Jung at 5 pm PST tomorrow talking about ABAP stuff. So maybe there is still hope for the ABAPers?