This is my first encounter with SAP Lumira and I can say that is very interesting working with it (her?). But choosing the right dataset and interesting topic is not easy at all. After several attempts with some other datasets (organic agriculture, statistics of population and few others) I found dataset for very serious issue – alcohol use among population. I tried to find datasets for my country but they probably doesn’t exist so I used United Kingdom data. Usage of alcohol is very high in my country and alcohol related diseases and conditions are constant threats to the health of the population.

In order to use data from Excel file I first got to cleanse the data and divide some Excel sheets in two. This is one of the original sheets: 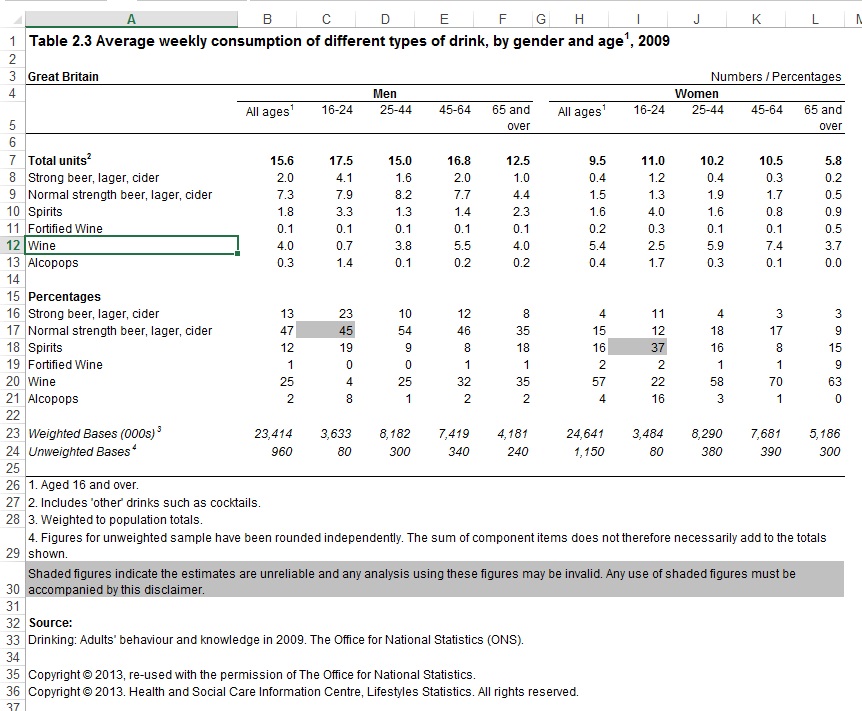 Then I import cleansed Excel sheets in SAP Lumira and start creating visualizations.

First visualization shows consumption of alcoholic drinks in home from 1992 to 2011 and it is in decline for the last couple of years. Amount is ml per person per week. Second visualization shows consumption outside the home and it’s in constant decline from 2001. 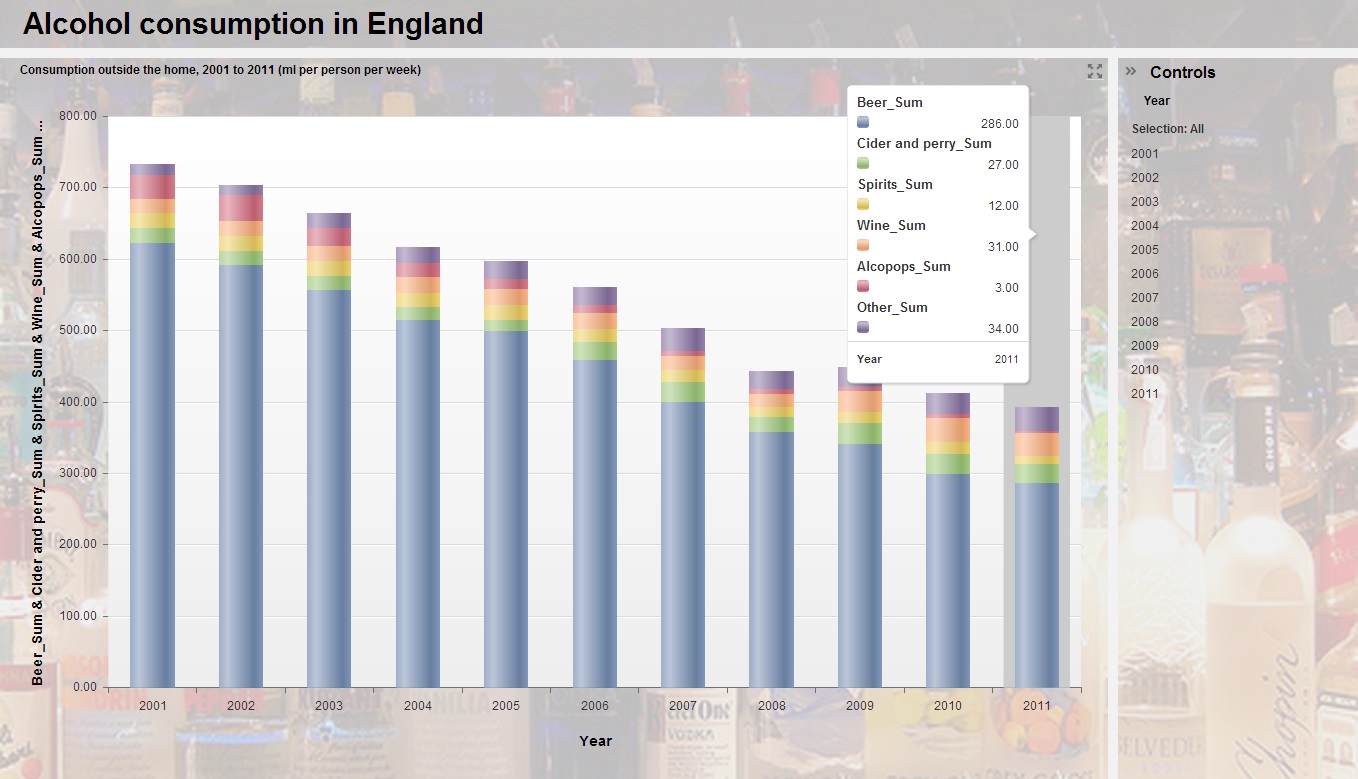 On next two visualization one can see average weekly consumption of different type of drinks by age groups, for men and for women, respectively. 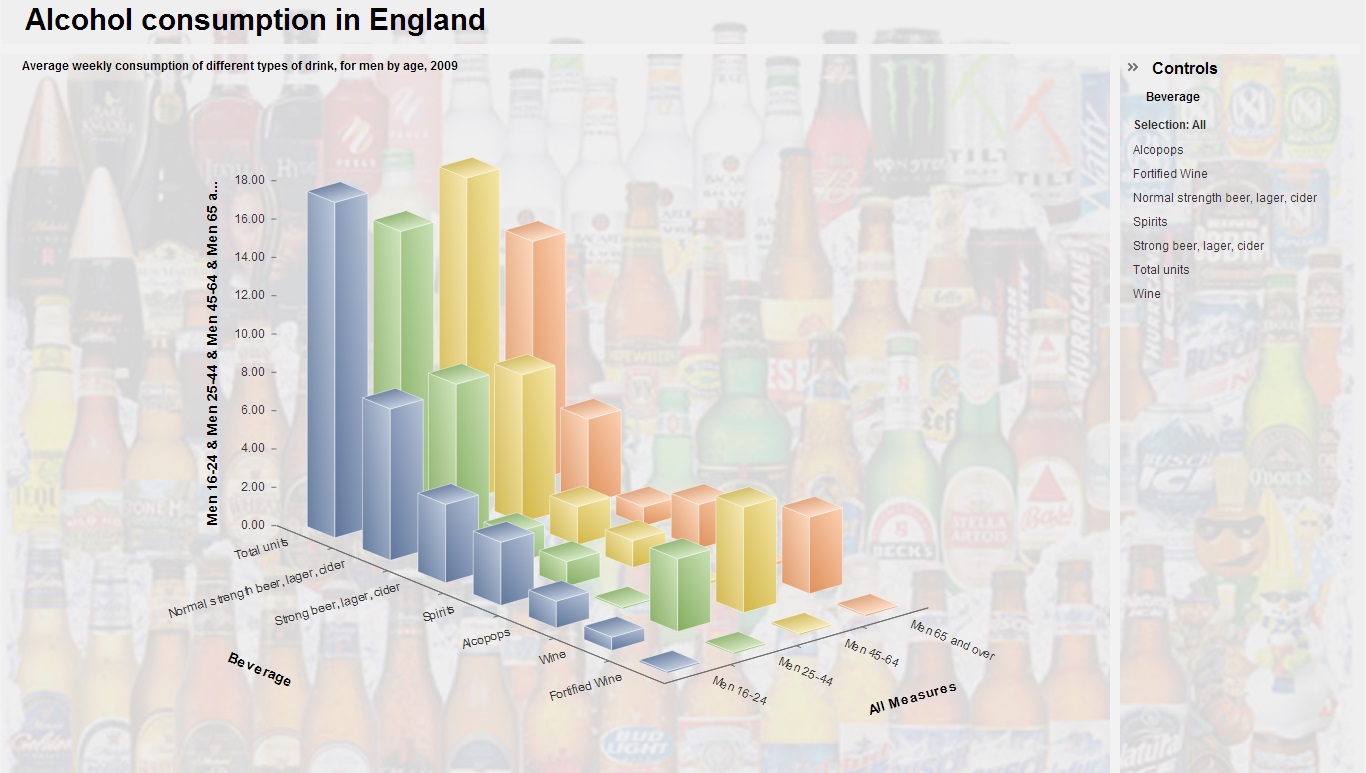 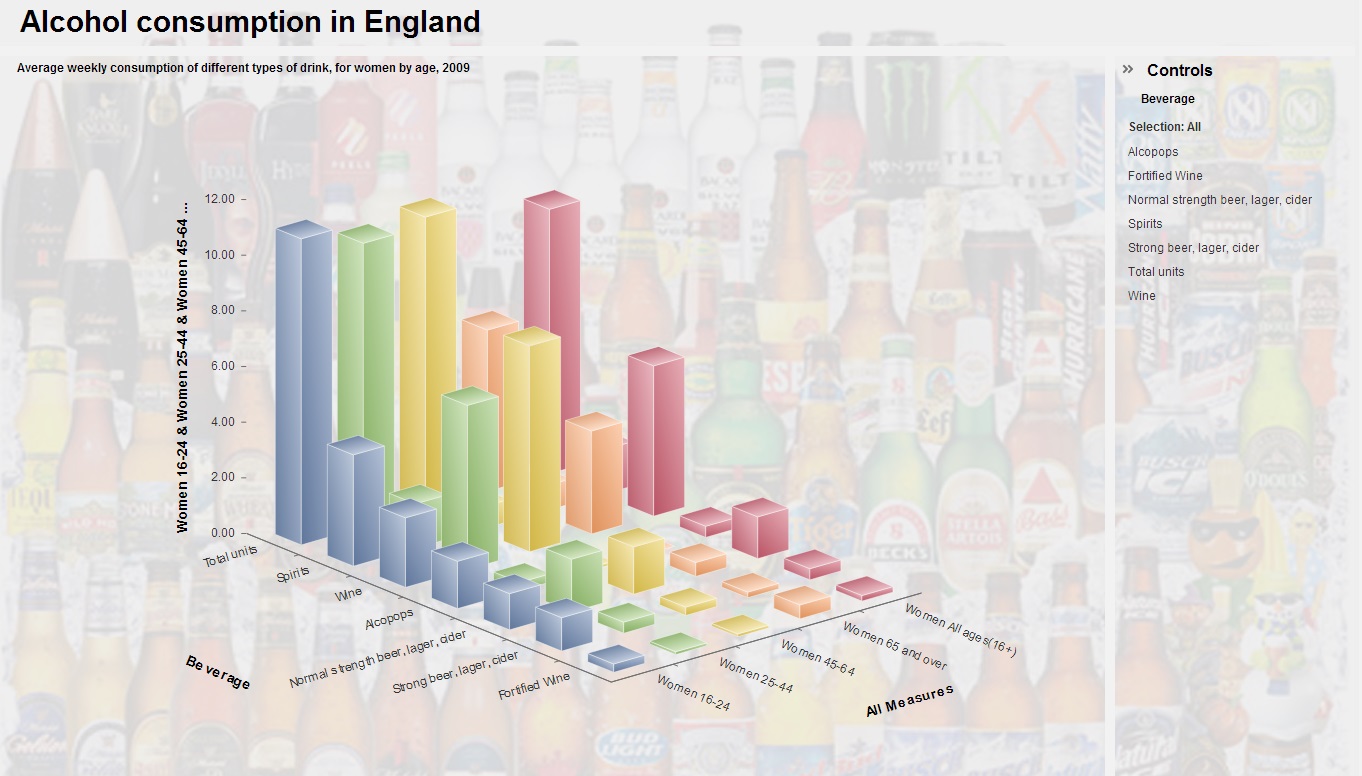 On this visualization are men and women compared. And now the ugly part of alcohol usage.

These visualization shows the most common consequences directly or indirectly caused by excessive use of alcohol. The numbers are constantly increasing from one year to another regardless of the fact that consumption decreases. This is due to minority of population who drink to excess. 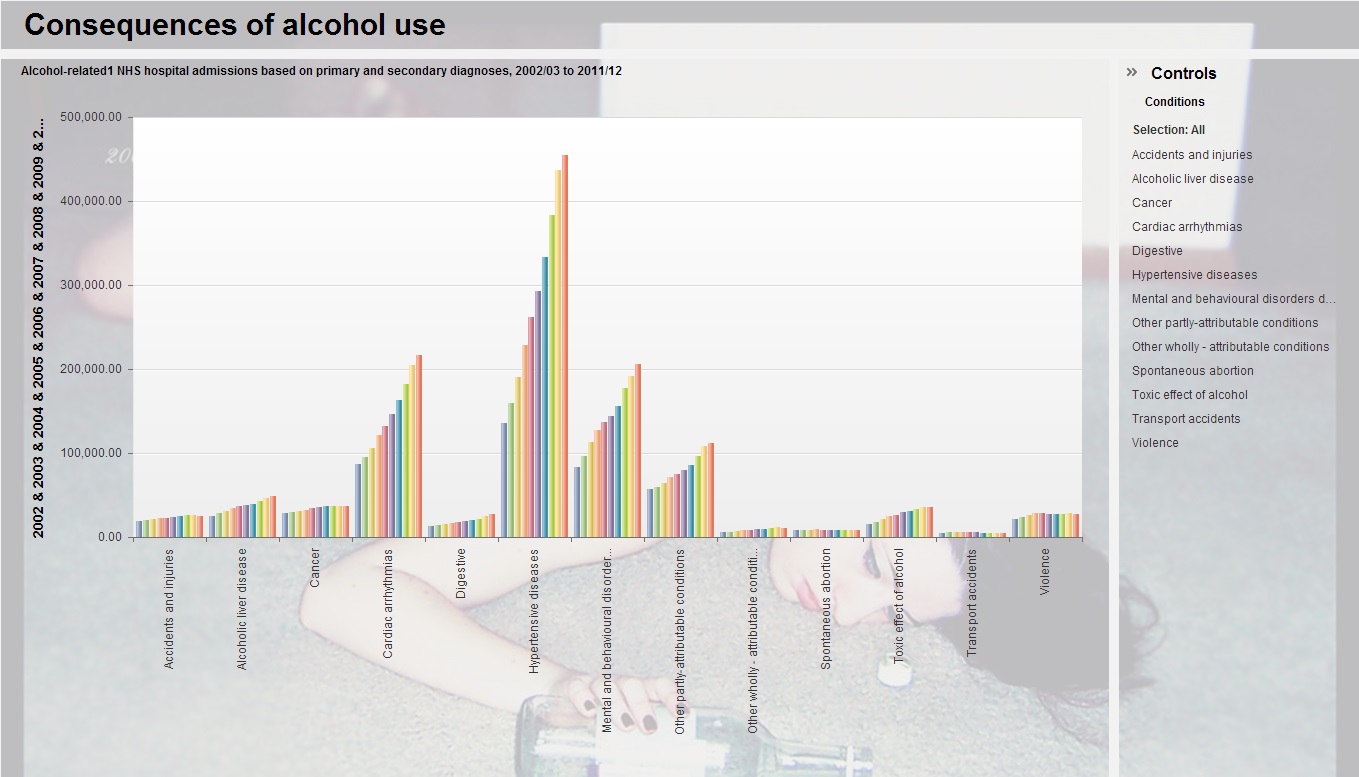 On every four/five years: 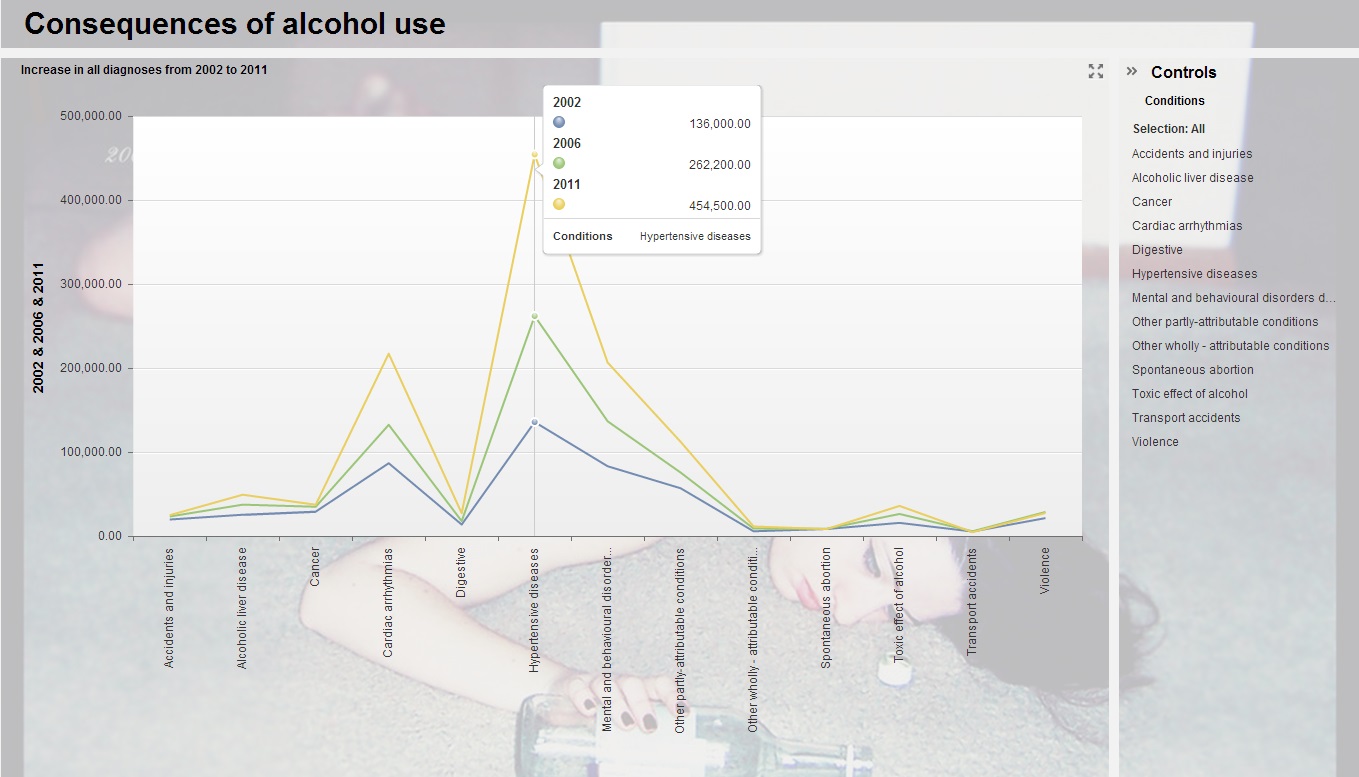 Major findings in overall statistic that I use here, are:

– 61% of men and 72% of women had either drunk no alcohol in the last week, or had drunk within the recommended levels on the day they drank the most alcohol;

Advice for the end of this post: drink responsibly or not at all.

Nice analysis Vladimir. Especially your inferences from all the analysis.

Am I seeing bottles in the background or am I drunk. Will check again tomorrow when I am sober 😆

it's great to see you here posting with the Lumirians!

Great job including your data source, I'll add that to our Data List

The background pictures that you chose to put with your charts, I'm still chuckling over.

BUT ... Have you checked out http://webrzs.stat.gov.rs/WebSite/Default.aspx

Maybe we can find some better local stats for you to work with?

How long did it take you to organize your data, and put the visualizations together?

Thanks Bijan! I'll check that site. I found similar one with statistics from Serbia but they weren't much interesting. I'd love to work more with Lumira and I'll try to use it at work with some reports.

It took me about three hours for all.