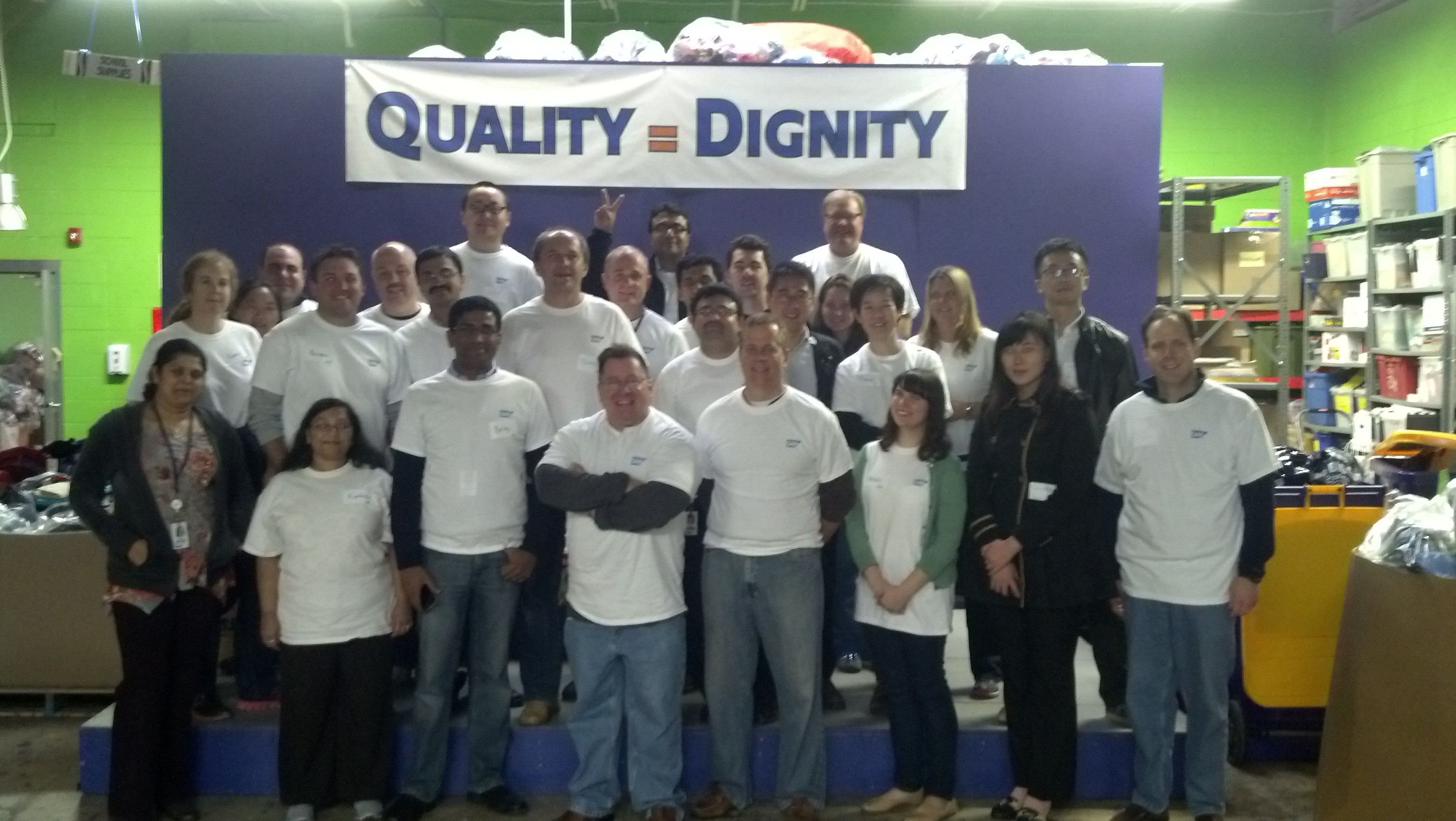 In North America, October is the Month of Service at SAP. During the Month of Service, SAP employees are encouraged to volunteer their time to a cause, as one facet of SAP’s overall initiative to build a sustainable future. Volunteer projects are posted on the corporate portal and employees are able to browse events and organizations they want to donate their time to, and sign up. In 2012, SAP employees’ volunteered a total of 130,000 hours of time to various charitable organizations. Food and clothing donations bins are common features in the halls of many of SAP’s North American offices, such as the snack food donation bin in the main lobby of the Newtown Square office. Most of these organizations impact and serve local communities directly, such as building playgrounds at schools in disadvantaged areas. This year, a team of CoE employees, headed up by Thomas Walther, and coordinated by Erin Cassidy, volunteered their time at Cradles to Crayons.

Erin Said, “I have worked with C2C in the past. When I became a volunteer ambassador I knew this would be a perfect place to bring my team. Cradles to Crayons is a fun atmosphere, all while giving back to young children in need.”

Cradles to Crayons is an organization that provides gently used or new clothing, books, toys and school supplies to disadvantaged children, ages 0-12, in the Philadelphia area. Many of the children who benefit from these donations are in the foster care system and may not have access to these vital goods without this program. According to C2C’s mission statement, Philadelphia has the highest poverty rate of the ten largest U.S. cities, affecting more than 130,000 children. Donations come mostly from corporate drives and grassroots community drives and the collected goods are then distributed to children in need via a variety of social services and school programs.

Cradles to Crayons launched in Boston in 2002. The founder, Lynn Margherio, was inspired when on a trip to her brother’s house and noticed how much unused and barely used toys and clothing her niece and nephew had. Margherio believed her brother’s children were not alone in owning more clothing and toys than they actually used, and wondered if there was a way to reroute these items to children in need. This sparked the idea that became the fully-fledged organization Cradles to Crayons; an organization that was featured in Oprah Magazine’s December 2011 issue.

On Thursday, October 10th, a group of 30 SAP employees, most of whom work in CoE, volunteered their time at the Cradles to Crayons warehouse in Conshohocken, PA. The team was split up into three groups; the first group sorted toys and made sure they functioned properly and had all of their parts, the second group made outfit packs for specific age groups/genders/sizes, and the third group went “shopping” in the warehouse, picking out goods, including toys, clothing, and books, and sorting them into sizes and age groups so they could be further sorted into donation packages. People of all levels within the organization worked together to get the task done.

Joanne Slover said, “I sign up for this one every year and I also go on random Saturday’s when I have free time.  It is a great organization and I am so proud to help out by also donating new socks and underwear every time I go for infants or little kids. The first time I went a few years ago, I was shocked to realize how many people there are in need in this area.  This organization provides the basics for kids who can’t afford new clothes, toys, books and just the basics free of charge. It is so amazing to me that such a place exists and touching every time I hear what they do for children in the community!”

Groups were formed and tasks were assigned. I worked in the group making outfit packs for certain age groups. We were given binders with items needed for each age group and gender and what age groups and gender were most in need of packs. The volunteer coordinator emphasized that the clothing should be able to make outfits for the children because this may be the only clothing they have and they want the children receiving donations to take pride in their appearance.People working in the shopping area were also reminded that the toys they were picking might be the only present this child receives for the holidays. 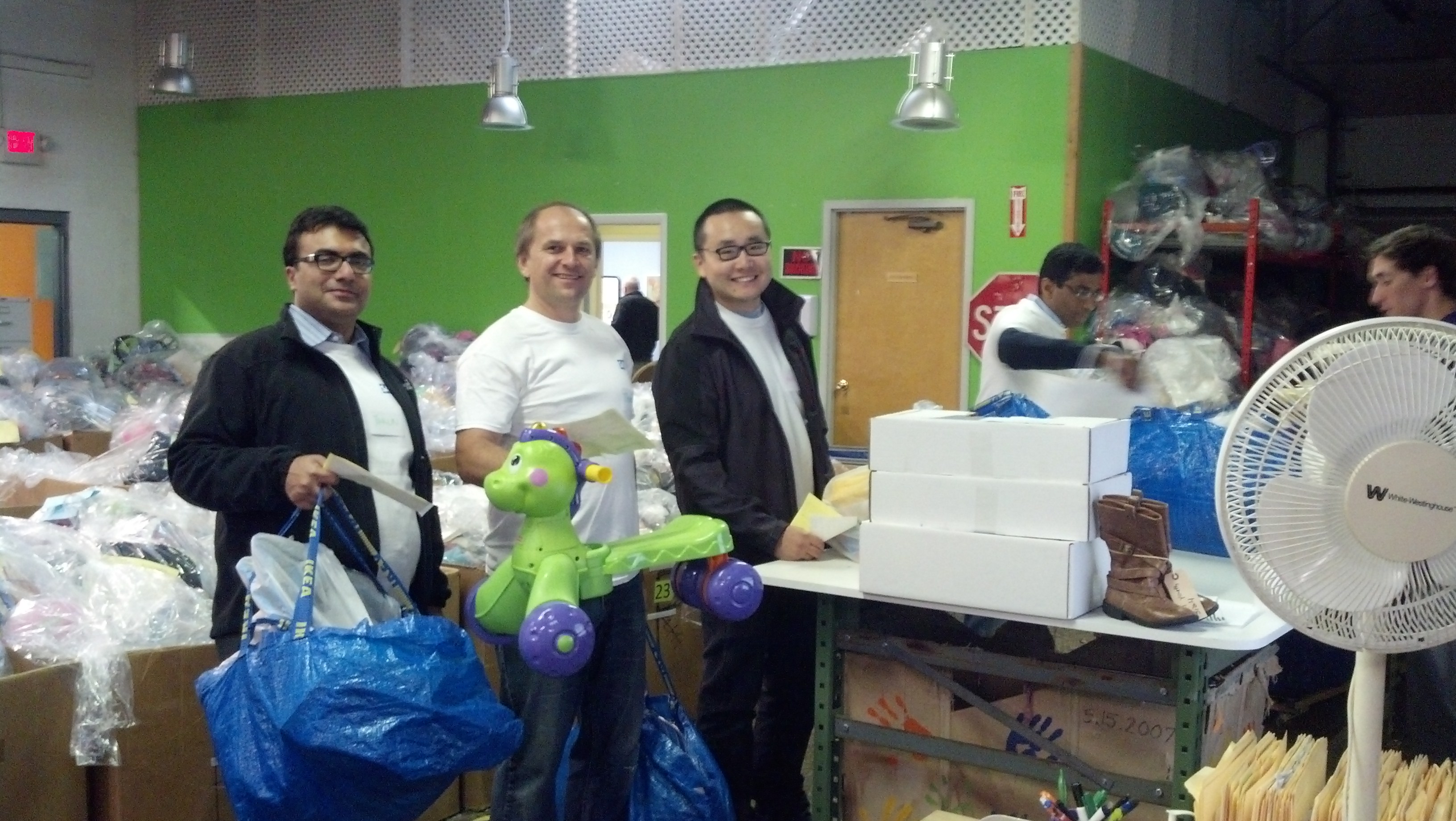 Quality=Dignity is a message displayed on a banner on the C2C website, and a message that the organization strives vigilantly to uphold.  The group making outfit packs were told what to look out for that would make items unsuitable for donation. Some of it was intuitive like making sure zippers worked, making sure there were no stains, and checking for tears. Other guidelines, like no clothing displaying messages about family such as “Daddy’s Girl” or “I Love Mommy” were something I wouldn’t have thought of, but necessary since many of the children C2C services are within the foster care system.

Tarun Luthra, a Director in CoE, said, “It gave me some time to really reflect on what I have. When you go home and see that your kids have almost everything, it really inspires to you to give back to the community and also brings into perspective how much you have to be thankful for.”

The benefits of corporate sponsored employee volunteerism are numerous, effective, and backed by research. According to a study by Chong Wei Nurn and Gilbert Tan of Singapore Management University, CSR (corporate social responsibility) benefits companies in a number of ways by effectively increasing employees “organizational commitment.” They define organizational commitment as “The relative strength of an individual’s identification with and involvement in a particular organization.” By this definition, companies with a commitment to volunteerism are able to retain employees by employees identifying with their company in a positive manner. Companies with reputations for engaging in corporate social responsibility also attract better employees to begin with according to Nurn and Tan’s data. Although not a part of this study, one benefit that comes from company sponsored volunteer events is team building.

Luthra said, “Working together on a project like this with one common goal was great for team building, and it was also great to see people from senior management there working alongside the other team members, working towards one common goal: Helping needy children.”

Last year Cradles to Crayons was able to get clothing and supplies to 87,000 children in the Philadelphia and Boston areas. They are able to do this from the help of social workers, teachers, nurses, and other liaisons of other organizations who service needy children, and who partner with Cradles to Crayons to make sure needy children in their communities get the vital goods they so desperately need. Cradles to Crayons also depends on the donations of individuals and organizations in the form of goods, money and volunteer hours. C2C has several drop-off locations for donations in addition to their Giving Warehouse located in Conshohocken, PA. You can find a full list of locations here: http://www.cradlestocrayons.org/philadelphia/donate-goods/drop-off-locations.