TechEd Day Two Where Everyone Is Grumpy

Waking up on my own at 5:30 am – gotta love the time zone advantage. It’s 8:30 am “my time” and normally I would’ve been on my way to work already. But in magical Vegas I have plenty of time to make full use of the magnificent hotel bathroom and a special vanity area that makes me feel all grown up and lady-like.

At 6:45 I’m already heading to the ‘continental breakfast’, totally cool and professional. There is no need for a map today as lots of other hungry TechEd participants are confidently moving in the same direction. Lots and lots of hungry and grumpy participants. I’ve only been living in a Southern State for a couple of years, but I’ve so gotten used to everyone being nice and smiley all the time that this picture just seems very odd to me. I know it’s early but would it kill you to smile to the staff? They got up waaaaay earlier than you did.

Continental breakfast (raise a hand if you know which continent it’s from – I have no idea) is served in a room the size of the Yankee stadium. The crowds are efficiently directed to the different food stations. The Mentors must have partied really hard last night since I see only one familiar shirt somewhere on the other side of the stadium err… room. And still no one smiles even after breakfast. Unbelievable.

Today I head to the area reserved for the Mentors to take a seat that’s rightfully mine and say hi to Mark Finnern noticing that he is very tall (isn’t it amazing how one could be a great person all around, but the first  thing that comes to mind is – holly smokes, he’s so much taller than me!). There is an actual DJ on stage who is spinning some pop hits and having a good time. Well, at least that makes two of us.

The Keynote finally starts and again I can’t stop thinking how much more I’d like to see it delivered by Hasso Plattner. Sigh… The note does not bring any revelations. This year it’s all about HANA (yet again) and even the last year’s darlings Cloud and Mobility are almost taking the back seat. Most interesting thing is actually to watch the reaction of the crowd. Where the Mentors and SAP people go “yay!!!” the rest of the room is like “uhm, whatever”. A bit of disconnect, it seems.

Next on my schedule are some Expert Networking sessions that are happening in the “lounges” on the main showroom floor (this is a humongous room where all the exhibitions are). The lounges are not actually separate rooms but just small areas with a few seats. On one hand the idea is great – anyone could join by just walking by and there could be as many or as few participants as the space allows. But on the other hand it’s difficult to hear your presenter when there is another session happening literally a couple of feet away. Still these are good session and at least they involve some real life experts and are only 30 minutes long. 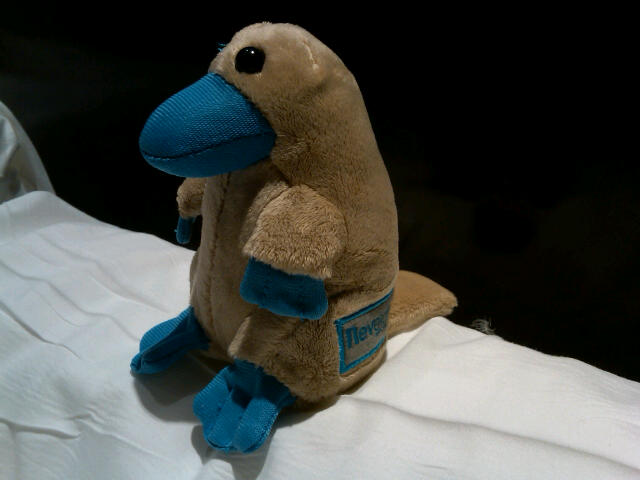 Before lunch I take a looting expedition around the exhibition hall to get as much free stuff as the airline regulations for carry on would allow. I’ll take that pen and that… I have no idea what, but it’s free and it means I certainly need it, thank you! In my defense – I don’t just scoop up everything and show genuine interest for the exhibits whenever possible or at least use my best Southern charm and “aaaw, my 4 year old would love this!”. By the way, my own special award for the cutest TechEd swag goes to the stuffed platypus from Revelation Software (see picture). How cute is that?! I also have to shamelessly plug my friends from Oxya who are a major TechEd sponsor this year. Mel (Melchior du Boullay) is one of the best Basis guys I’ve known, so they totally deserve all the success. Come and meet him at their booth if you’re here at TechEd.

The lunch is being served and the food is surprisingly good. Once again I’m amazed by the people working at the event – masterfully directing human traffic, smoothly refilling the stations,  picking up trash. Their service is almost invisible, which only speaks for its high quality. Don’t their deserve a smile and a thank you?

Finally almost everyone seems to be in a better mood after lunch and I’d love to get some more free stuff but have to run to the hands-on session ‘ABAP on HANA’. Inside I feel disappointed immediately because there are two participants per laptop. Arrrgh… This makes it a “hand on” session at best, might as well have just watched a presentation. It doesn’t help when in the middle of the session we are starting to get ‘maximum number of connection reached’ errors and eventually everyone gets kicked out from the server completely. Trouble in the IT paradise, ha-ha. Like the star students, my partner and I finish all the tasks an hour earlier and take off leaving someone else a chance to get their hand(s) on HANA.

Much to my relief, there is some serious dinner served at the optional Networking Reception. Some adult beverages are also being poured, which probably contributes to making the next event (Demo Jam) a lot of fun. I have to refrain from overindulging though because I’ll be called on stage as a former member of the month together with the fellow MOMer Samuli Kaski. There is no tiara or an ‘Oscars’ style speech involved, fortunately, and we manage climbing up the stairs and walking the few steps successfully and hopefully don’t look too awkward standing there on stage. I believe there might be a recording of this glorious event – check it out and let me know because I’m too terrified to watch it.

The Demo Jam emcee is awesomely hilarious and most demos (or jams?) are entertaining as well. I cheer as loud as I can for Felipe Chirinos and ‘Drums Analytics’ but he is a runner-up. I don’t like saying “everyone is a winner” because we all know this is just not true, but there are certainly no losers at this event. It’s a perfect way to end the day. Is there a chance to see more smiles tomorrow? I’ll be watching you, TechEd…