Las Vegas – The Entertainment Capital of the World, saw yet another return of a different form of entertainment at this time of the year, where geeks and nerds and data scientists and IT engineers and a whole lot diverse crowd congregate to celebrate, network, learn, share and collaborate their knowledge under one roof. SAP Tech is back, and it is bigger and better ! 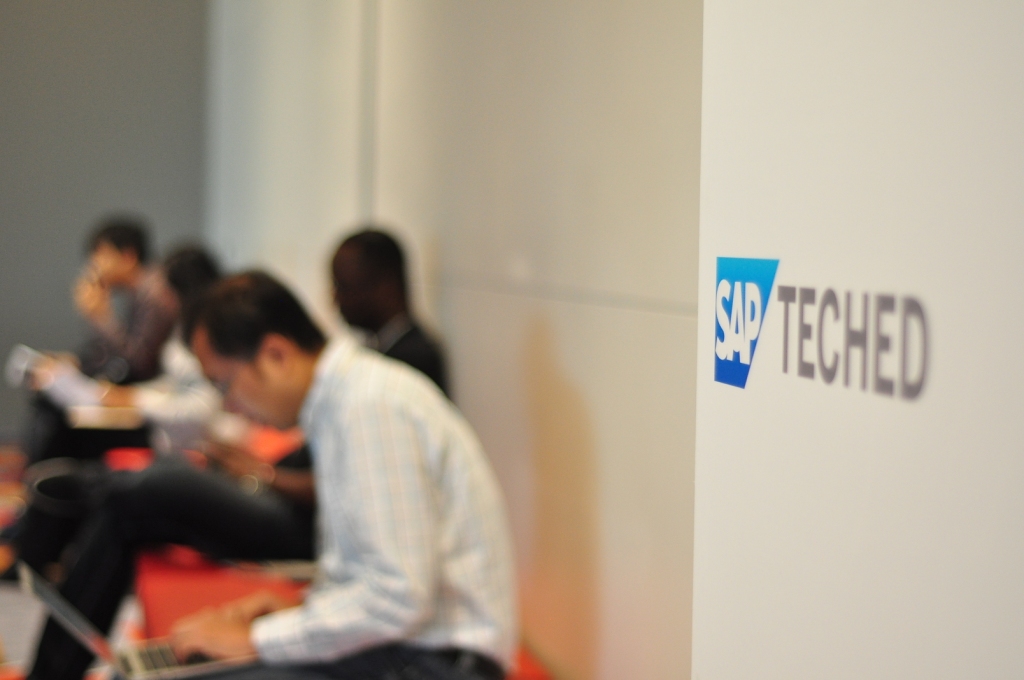 Being a first time SAP Tech Ed attendee, i was bowled over by the arrangements made by SAP, not missing the fun part in any of them! I managed to register at the check in counters post noon, This year’s content material was given in a usb, which was a bottle opener, symbolizing(celebrating) the spirit(in practical and metaphorical sense) of Las Vegas. The ribbons were a hit among the first-timers and experienced teched-ers alike!

The Venetian-Palazoo congress center was buzzing with activity with delegates, speakers, attendees going around, talking, working, and networking. The hangout spots in the lobbies, with aesthetically arranged bean bags and work stations, added to the extra bit of fun while helping in being cautiously productive. 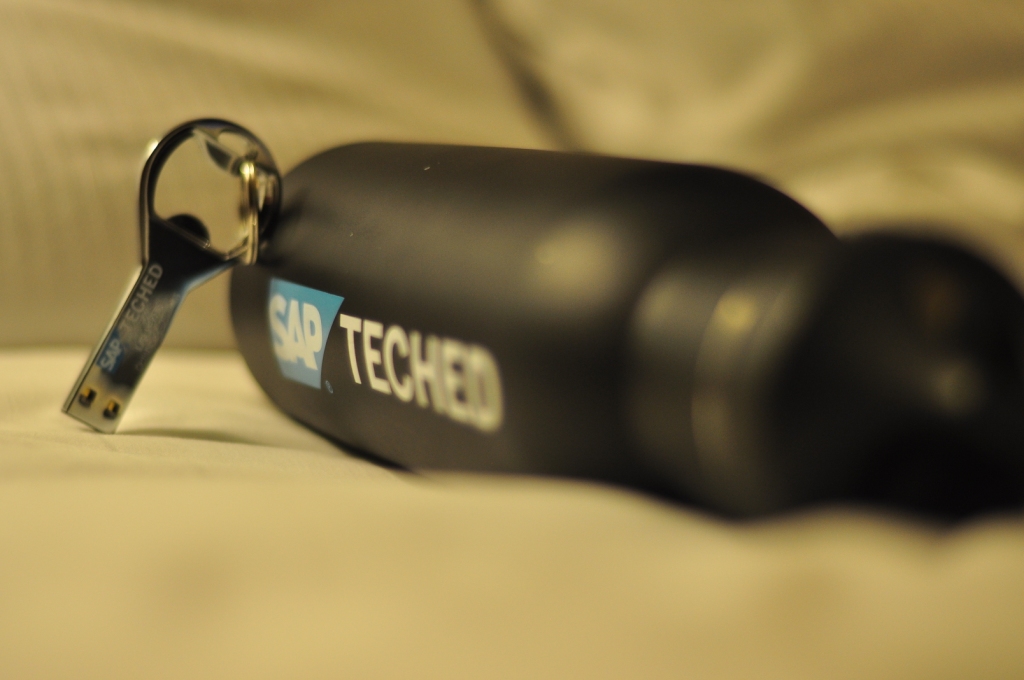 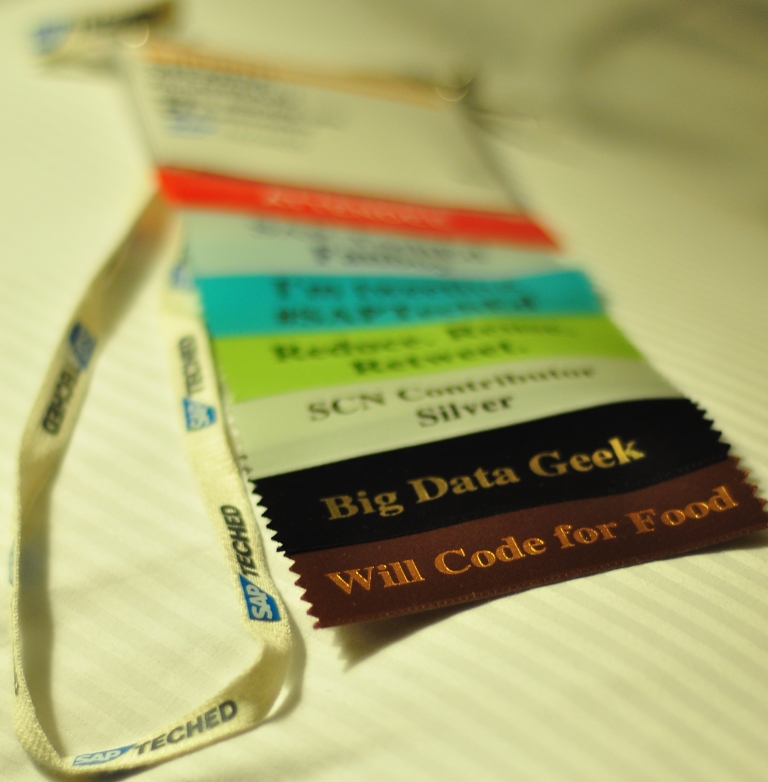 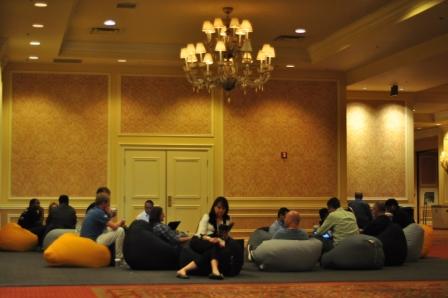 Today being the pre-conference day, the only scheduled Agenda was the Guest Key note by renowned American Data Scientist and Statistician Nate Silver , other than the Innojams ( Which by the way was won by Team #Crowdify this year. Congrats Guys! )  and the preconference ASUG sessions that were held since sunday. The evening was kicked off by Maggie Fox, SVP of Digital Marketing at SAP, who gave us a brief insight on what was in store for this edition of TechEd, a brief shout out to all the sponsors of the event,  and introduced Steve Lucas, President, SAP Platform Solutions at SAP, not before vouching to be present at the 5K run this Wednesday. 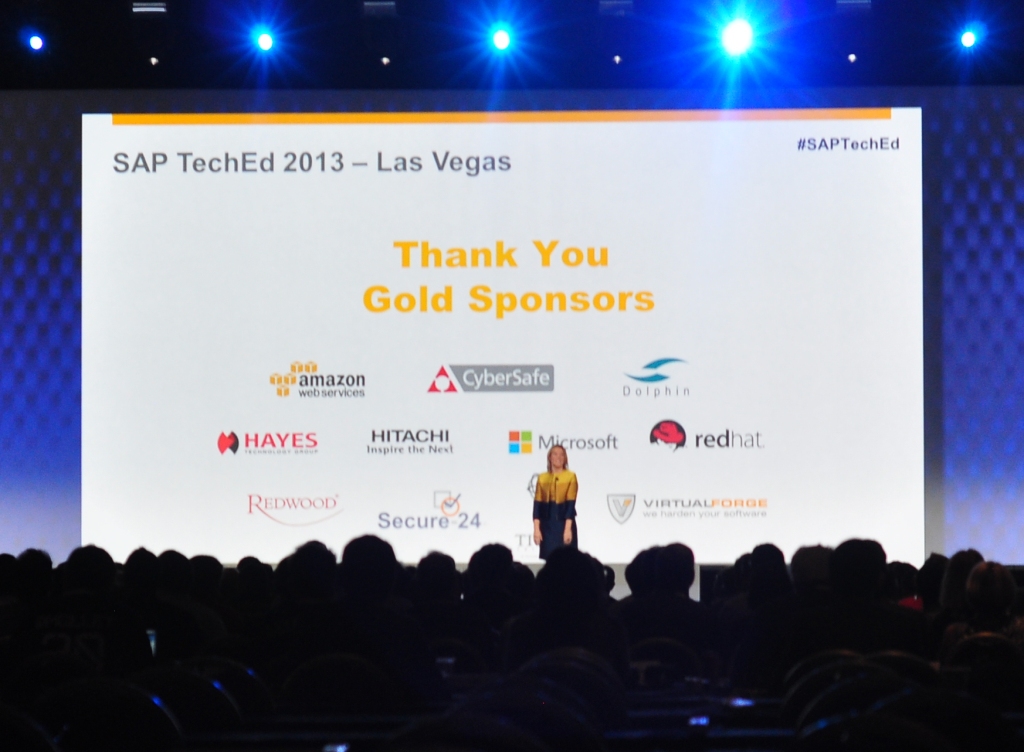 Steve, in between defending Pluto’s planet status, and referring to the honking syndrome in Mumbai which makes it difficult to differentiate which honk is a genuine one and which is the one that matters, made an interesting point while introducing the topic of Big Data. 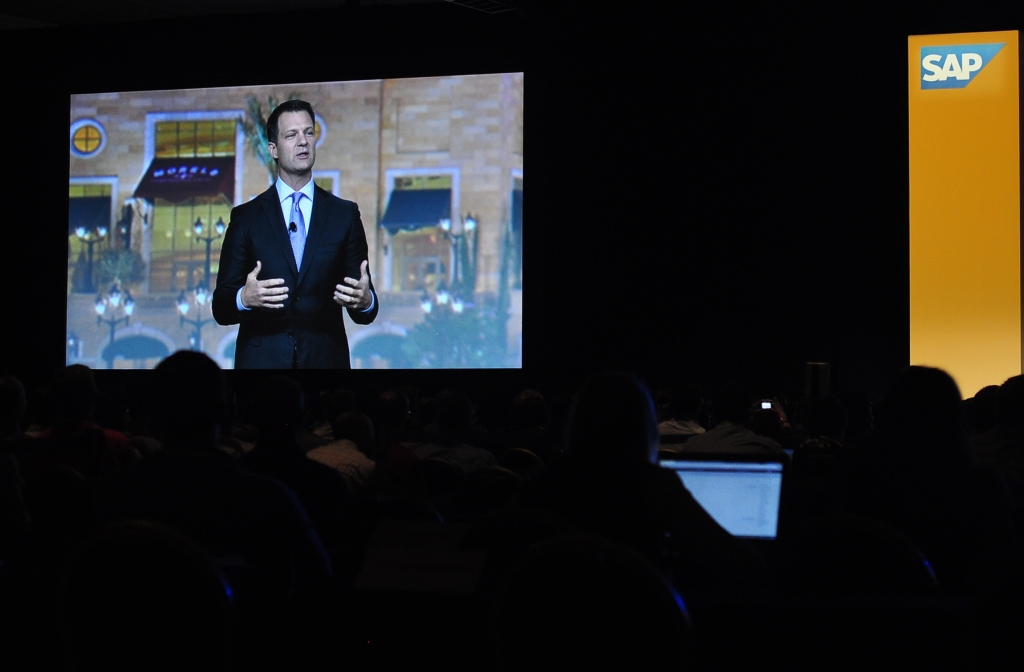 If we had one US$ for every byte in a zeta byte, a zeta byte worth of dollars stacked up would stretch from the sun to pluto and back 18000 times.

and thus emphasizing about the importance of the volume, variety and velocity of data and how Nate Silver has been a pioneer in bringing that Big Data to good use in recent times. He then handed over to Nate Silver, who started off his fantastic keynote by talking about how Big Data is being influential in today’s lives and whether bigger data can lead to better problems and how to tackle them for better results.

Nate gave deep insights about the 538 Method ( which formed the basis for the name of his book ), how different algorithms and approaches, simple and effective,were used to make inferences and predictions from campaign data  during the US Elections in 2012, while giving away fun facts such as how Justin Bieber was more popular than Joe Biden on US election day. 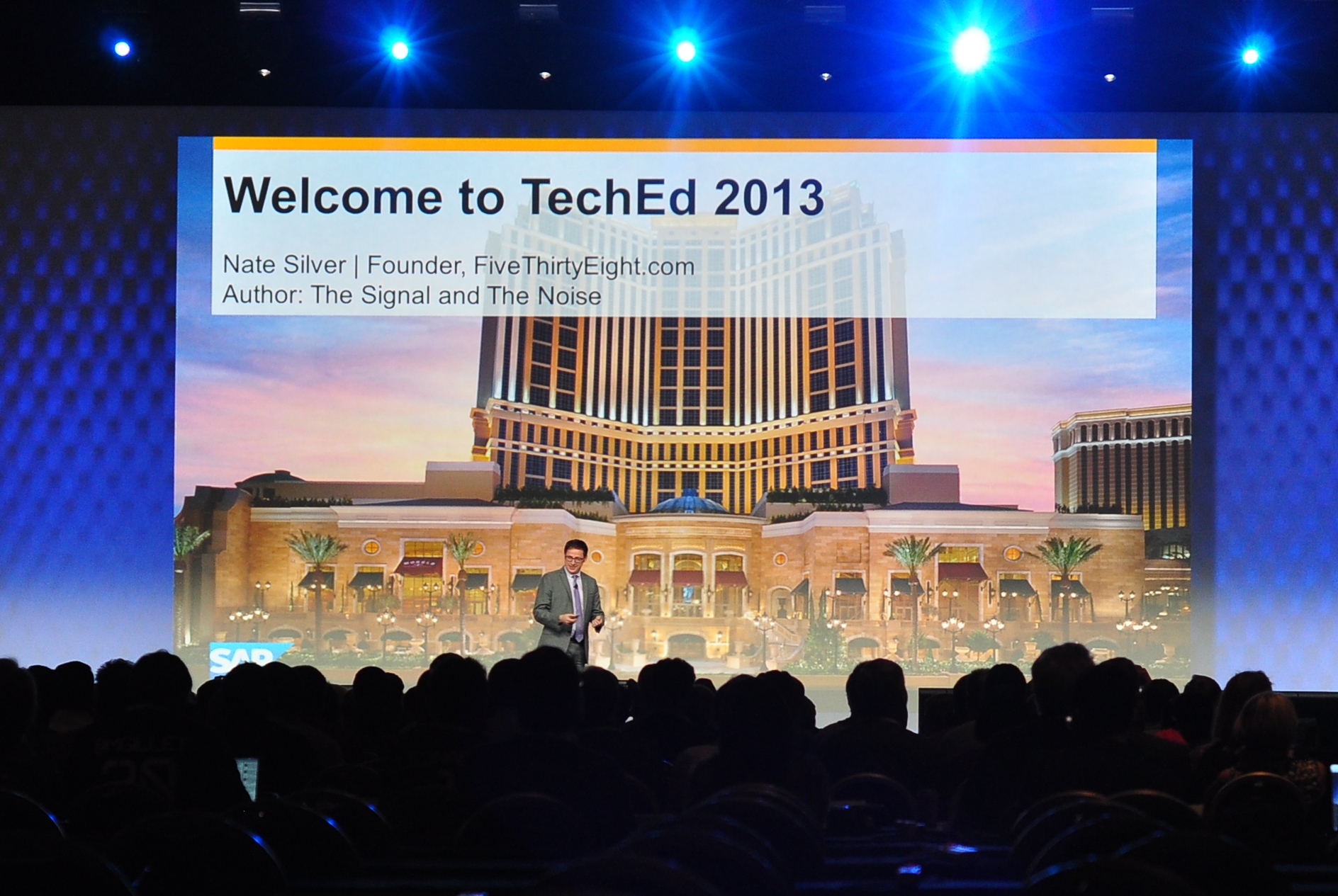 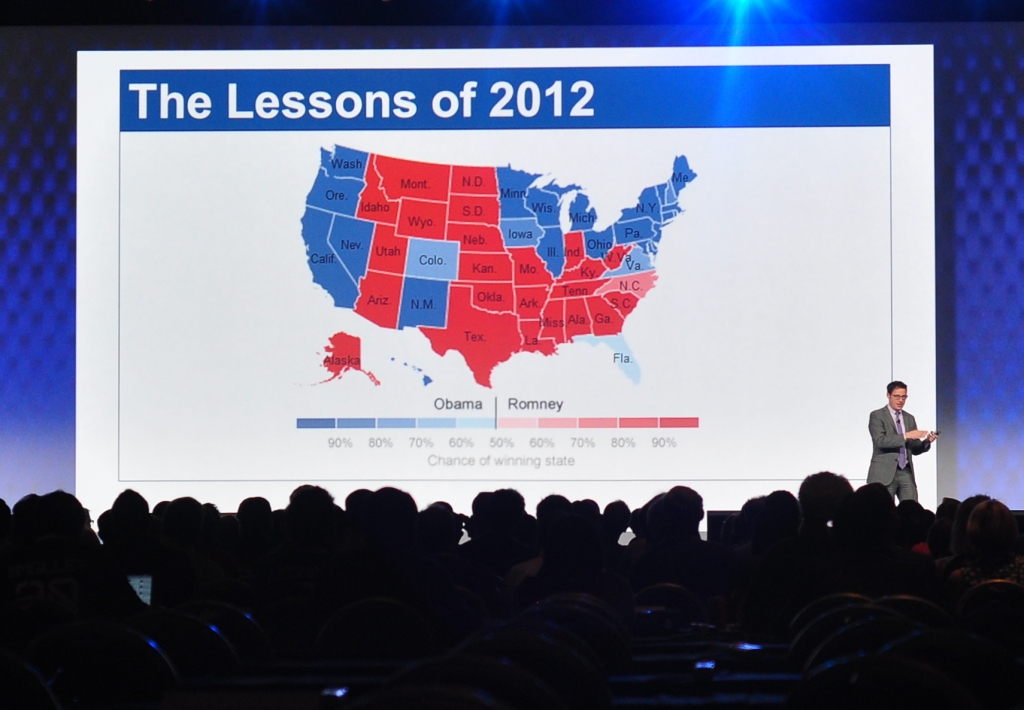 He talked in detail with definitive examples about the problems that we currently face with Big Data, and how the Signal to Noise (Gap between what we really know and what we think we know ) is the real challenge that we face today and problems like

1. Big Data..Big Bias : How we tend to detect certain data points and patterns when there aren’t actually any.

2. Limits of Artificial Intelligence : How maps in New York city failed to

3. Feature or Bug : How a random bug in the IBM supercomputer Deep Blue was unable to select a move and simply picked one at random.

He mentioned about how finding relationships in the data is important to make predictions going forward and noted that Prediction is intrinsic and important to science, more a system’s approach, where in constant feedback back into the system makes it better.His cognitive tips about handling Big Data Analytics were

1) Think probabilistically : How flood/hurricane warning systems have improved and excelled over time to reduce margin of error

2) Know where you are coming from : Knowing our blind spots will help us predict outcomes and interpret data better

3) Try, and Err : 80% of Accuracy can be achieved by just 20% of the work, and the remaining accuracy can be used for competitive advantage.

He ended his wonderful and insightful keynote by citing lines from a poem of Piet Hein, Danish scientist and Author

The Road to wisdom ?

After that, Nate and Steve talked for some more time about Big Data from a company/technology perspective. On Steve’s question about what make an organization successful, Nate observed that Data & People & Technology were the mantra for the success of an organization. Steve mentioned how companies are struggling to find the right skilled data scientists and asked Nate what companies should probably look for or invest in to get the right people, for which Nate answered

Two critical/essential traits for a Data Scientist are

The rest can be taught/inculcated. 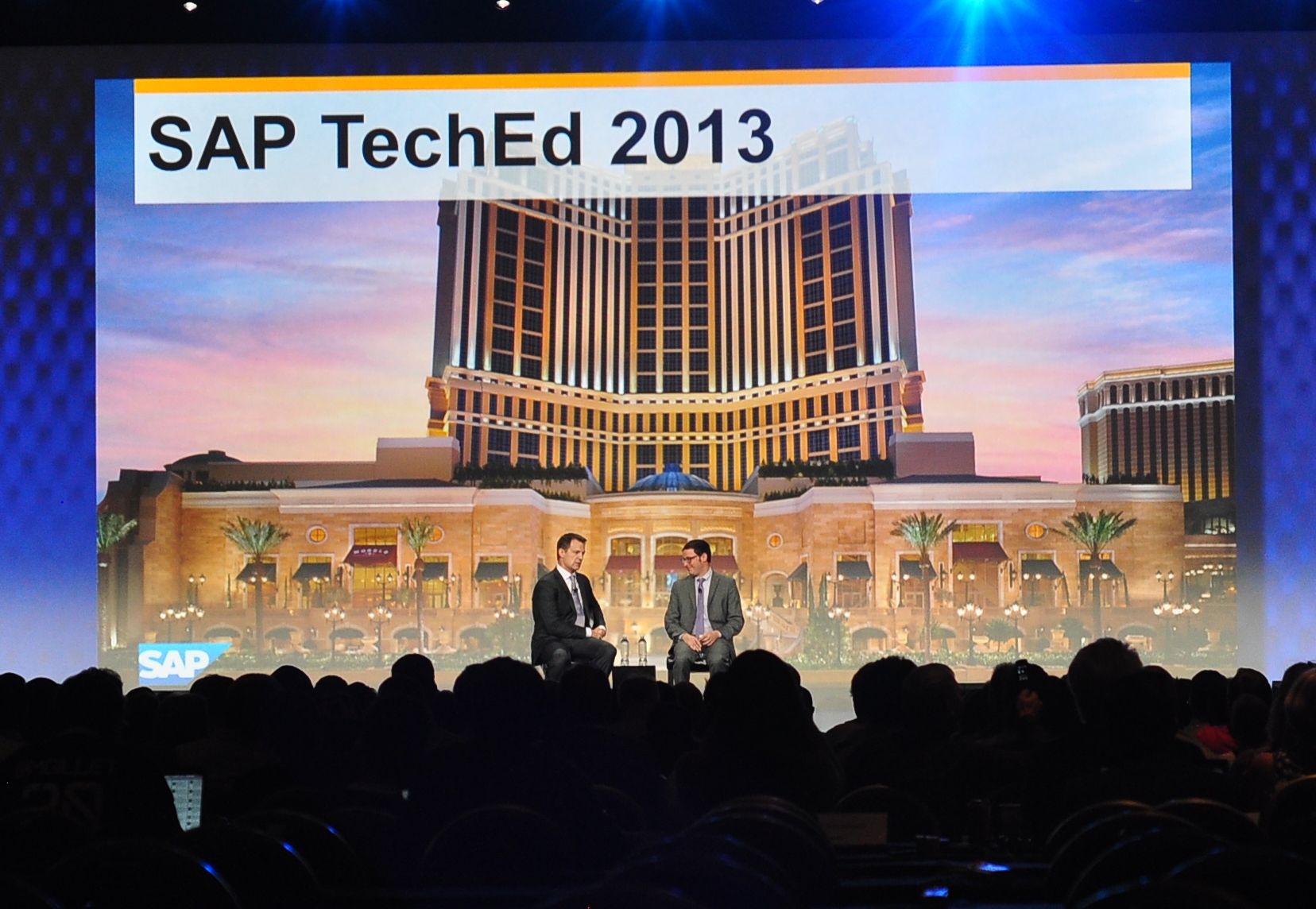 Nate mentioned how he was looking for data scientits to join his team that write and present well, and how that was a rare breed today.

Steve talked about how companies should thrive in today’s competitive world of analytics and what might be a critical success factor for which Nate noted that a combination of real honest stories and testimonials are important for technology companies to sell their analytical solutions, and said that says healthcare is a top big data opportunity in today’s world, and that they are much like the pre-moneyball baseball era.

Steve ended the evening asking people to drink responsibly 🙂 and that Vishal Sikka’s early morning keynote is not to be missed.

Looking forward for some exciting news and insights tomorrow.

Cool recap Snehith! Thanks for posting it so quick after the keynote itself.

Thanks for posting the recap and the pictures

Thanks Vivek. Glad you liked it !

Good one Snehith. Thanks for sharing 🙂