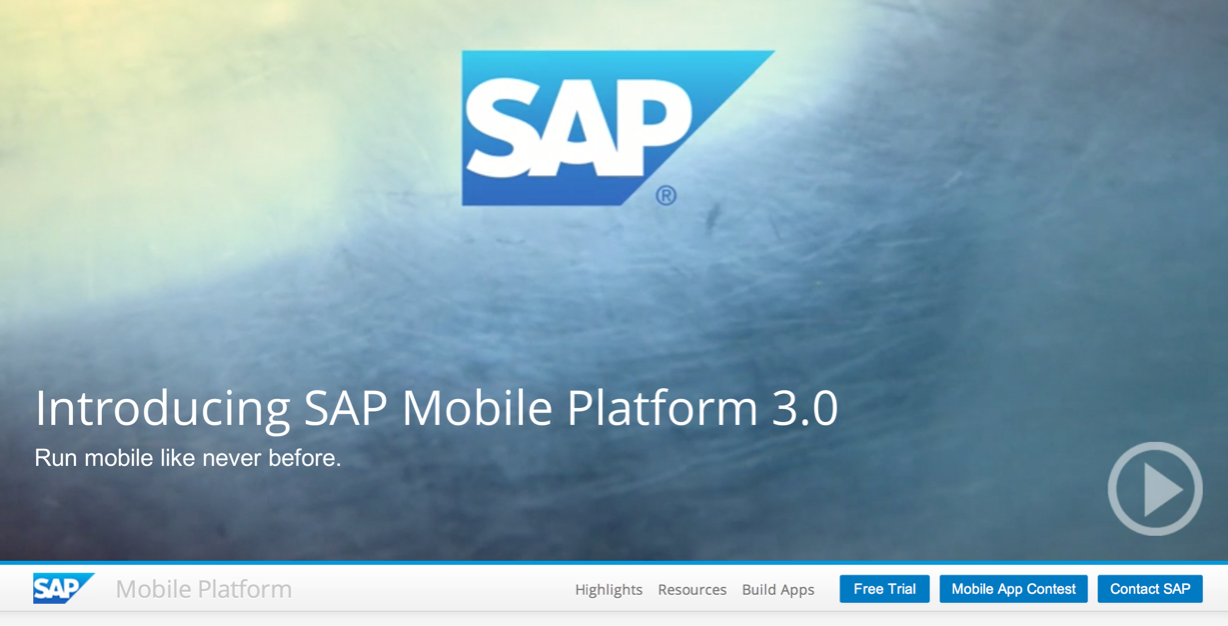 The official press release was published in the Wallstreet Journal. The launch was covered in PCworld as well as InsideSAP and SMP3 was discussed by Franz Faerber in Vishal Sikka‘s SAP TechEd keynote (minute 54:12 onwards). Anthony Reynolds, SVP for Mobility at SAP celebrated SMP3 in his blog SAP Mobile Platform 3.0: A Promise for a More Mobile Future

Furthermore, we announced the Game On mobile app challenge on SMP3 with a chance to win NFL Super Bowl tickets. 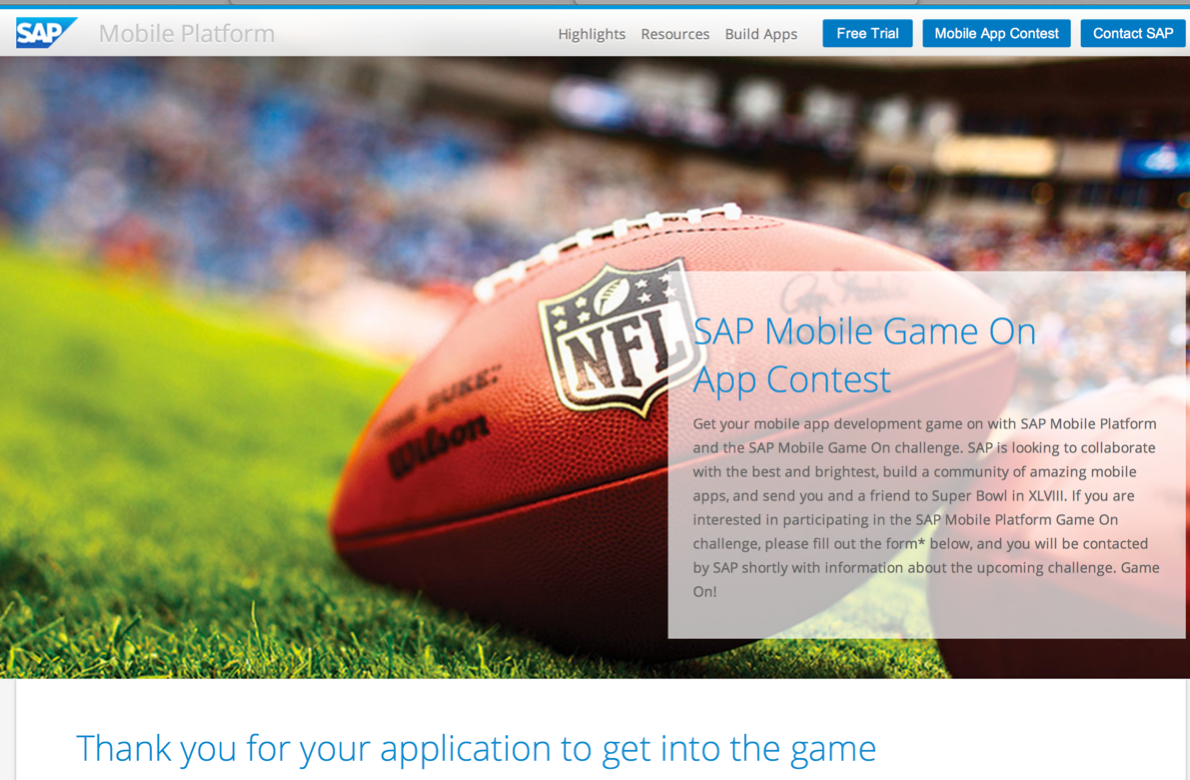 When I joined the product management team, I had the vision of SAP becoming the “Apple of the Enterprise“. With the release of SMP on HANA cloud in March 2013 we made the first step in that direction. With today’s launch of SMP3, we hit another major milestone! 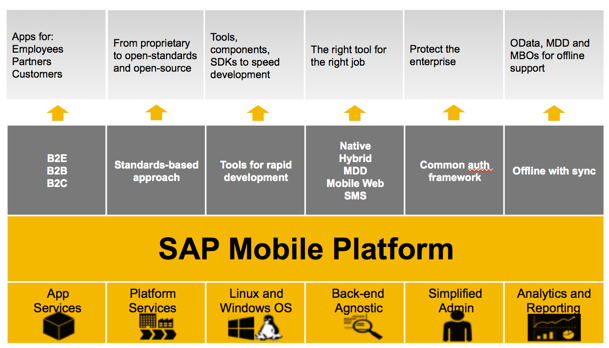 SMP3 unifies Sybase Unwired Platform (SUP), Sybase Mobiliser, Syclo Agentry and SAP’s mobile best practices. SMP3 has a fully functional Gateway Java inside and a JAVA based version of SAP Process Integration (PI) for data integration from various different systems. With SMP3 we opened up the mobile platform and embraced open standards such as

SMP3 adds great capabilities and features for mobile developers and administrators, such as: This rich feature set allows you to develop and run mobile applications on top of SMP3 much faster and at a lower cost.

In addition, SMP3 “layers” the value of these features on top of applications that you have built already against NetWeaver Gateway or directly against HANA – both of which use the same OData standard for their models:

Before the release of SMP3 we actually worked together with various customers and partners to validate the software.

To prove out that SMP3 scales we teamed up with Intel and put SMP3 to the test. The result of these tests are published on Intel’s website. In summary we found:

Before we launched SMP3 we host hands-on workshops in North America, EMEA and APJ to ensure our customers and partners are fully enabled to be successful. We also had a full day session at SAP TechEd in Las Vegas on SMP3. Here are some of the SMP3 quotes from the customers and partners that attended these sessions:

“Step in the right direction”

“Good that platform is being consolidated. Easy config.”

“Can get up and running quickly”

Even before the software goes into Ramp-Up, we gave SMP3 to 10 customers to validate it. The feedback so far has been great: we got our customers to install the software quickly and many of them had their first apps going on SMP3 within the first week of the validation cycle.

Here are some videos that cover the SAP Mobile platform 3.0: Ian Thain recorded a bunch of “Code Talks” – many of them covering SMP3. Check them out at http://scn.sap.com/blogs/ithain.

If you are interested to sign up for SMP3 Ramp-Up, check out this blog: Demystifying SAP’s Ramp-Up process

More info on training can be found at Get your hands on SAP Mobile Platform 3.0

Launching with new features. ..Thanks

Thanks Jens for updating us on SMP3.

That sounds great, almost too hard to believe. Would love to hear more about that. Out of the box synchronization? Based on Agentry?

Is SMP becoming the new PI? Will BPM be integrated as well?

OK, I'll probably have to wait for another 2 weeks to hear all about it in Amsterdam 😉

Hey - almost missed that in the picture.

and even better - you have a chance to win NFL Super Bowl tickets during the SMP3 app challenge: http://scn.sap.com/community/developer-center/mobility-platform/blog/2013/10/23/win-super-bowl-tickets-with-sap-mobile-platform-30 🙂

Great news Jens, The features are really reaching our expectations. Please  let me know if there is any free sessions/hands on available on 3.0

Is the solution is available with on premise ?

Great blog Jens, thanks for the insight on the new features!

And two more great assets to share with everyone here.

I get below error for sap.com/smp link.

Not Found - The requested URL /SMP was not found on this server.

Sankar, if you're behind the SAP firewall/proxy server you'll need to add www - www.sap.com/smp

Similar questions to Twan van den Broek from me...

Think you want to refer the questions to Jens Koerner iso me, I'm just another curious SMP guy 😉

But like to hear the answers to your questions as well.

Sorry Twan, I meant my questions are similar to yours, not that they were directed at you!

I had an opportunity to at the ASUG Seminar at TechEd and I am really looking forward to play with the new SMP3.0. The fusion (between SAP + Syclo + Sybase) is more mature and solid. I believe will be a great version.

actually you can get your hands on SMP3 very quickly: sign up for the Game On app challenge, build a cool SMP3 app and win Super Bowl tix: http://scn.sap.com/community/developer-center/mobility-platform/blog/2013/10/23/win-super-bowl-tickets-with-sap-mobile-platform-30

where I can download this application, because in my SAP MARKETPLACE only appears to  SMP 2.3

SMP 3.0 is not yet released. Its under ramp up. It would be released in Q1 next year. But You can get the SMP SDK 3.0 from SAP MARKETPLACE

Hello all, customers and prospects can obtain a free SMP 3 trial on the SMP site at www.sap.com/smp.  BTW, more than 70 app entries for "SuperBowl App Contest" on this same SMP site have been received to date.  @Jens mentions this contest earlier in this discussion thread.