A little bit of big data goes a long way.

“It is impressive, but also frightening, how quickly people are putting so much on the line on the basis of just the smallest snippet of data,” statistician and best-selling author Nate Silver (@fivethirtyeight) said to a group of SAP partners, users and employees Monday night.

The Dow Jones Industrial Average lost $136 billion within seconds of a bogus tweet from a hacked AP Twitter account in April. The index rebounded as quickly as it fell, but Silver’s example illustrated how people can behave irrationally when they encounter even one unstructured datum — one that, in this case, was a hoax.

“The world is a competitive place,” Silver said. “Apply your human skepticism toward the data you produce on a day-to-day basis.”

“Certainty sells,” Silver said. “But in the real world, knowing what you don’t know is part of the battle.”

Weather forecasters build uncertainty into their models, he noted. The farther into the future they look when predicting the path of a hurricane, the wider that potential track becomes.

“Weather forecasters learned early on to think that way, [which] conveyed to the public to think in terms of probabilities,” Silver said. “People who were always looking for the perfect answer may only be running in place.”

No. 2: Know Where You’re Coming From

“You want to be alert to what your blind spots and biases might be,” Silver said. “Of course, that’s a lot easier said than done.”

Organizations that purport to be bias-free tend to be the most biased, according to Silver. These organizations frequently chose fictitious male candidates for job interviews over female candidates with identical credentials, in an experiment cited in former Facebook COO Sheryl Sandberg’s book.

“More often than not, the wins you make from using data more effectively are little wins,” Silver said. “Big data, but little wins around the margins.”

So it’s important to make sure that your products work in the best laboratory of all, Silver stated. For example, Google constantly tests its products on its users because experiments and focus groups are no substitute for the real world.

“When you start out with your ideas, test them and adjust your release date based on how well your experiments go,” Silver said, “you converge toward better and better answers.”

The road to wisdom? Well, it’s plain
and simple to express.

How to Get Your Hands Dirty at #SAPTechEd 2013

Big Data at Work in the Great Bazaar of Istanbul –  No Coding Required! 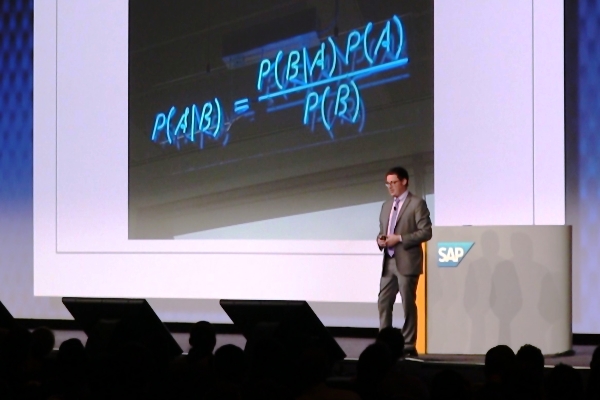 You captured the essence very well. Thank you  - will refer to it many times I am sure!

You're welcome, Gail. It was an insightful presentation, and I'm happy to have done it justice.

“More often than not, the wins you make from using data more effectively are little wins,” Silver said. “Big data, but little wins around the margins.”

You're welcome, Eduardo. And many thanks to you and Gail for commenting!

Thanks for sharing the key points from Nate Silver's speech

My pleasure, Vivek. I'm glad you liked the blog post!