Here in North America Marketing, we have an entire team of analysts dedicated to enabling better decision making through data.  Every day, Business Management Office (BMO) analysts – and I count myself as one – use SAP tools to make sense of our data: monitoring ongoing programs, evaluating Marketing effectiveness, and ultimately catching trends and insights that might otherwise have gone unnoticed.

Unfortunately, not every organization has the same analytical muscle behind it.  Leaders and researchers in the nonprofit sector are surrounded by mountains of both quantitative and qualitative data, but often lack the manpower or the tools to really do anything with it.  As a graduate student at Villanova University, I supported Dr. Lauren Miltenberger throughout the first two years of her research project studying the relationships between the nonprofit sector and our government as they “contract” to deliver many of the social services we’ve come to expect as a society.  As with most professional relationships, some entities simply pair better than others and have higher levels of success.  Lauren’s research seeks to profile this contract landscape, key into what factors cultivate the most efficient partnerships, and identify why some states do it better.

Although I graduated from VU more than a year ago, the nonprofit sector remains a strong interest of mine, and the DataGeek Challenge offered a great opportunity to harness my team’s analytical skillset and, hopefully, shed some new light on a real-life research question through the power of SAP Lumira.  When I asked Lauren if she’d like to collaborate on this project, she was thrilled at the prospect and immediately shared her Excel file.  The main question she wanted us to address is what factors might have led nine U.S. states to form co-sector task forces.  After some data manipulation and standardization, we identified 20 measures that were vital to the research question, and got to work.  Here are a few key highlights we identified using Lumira. 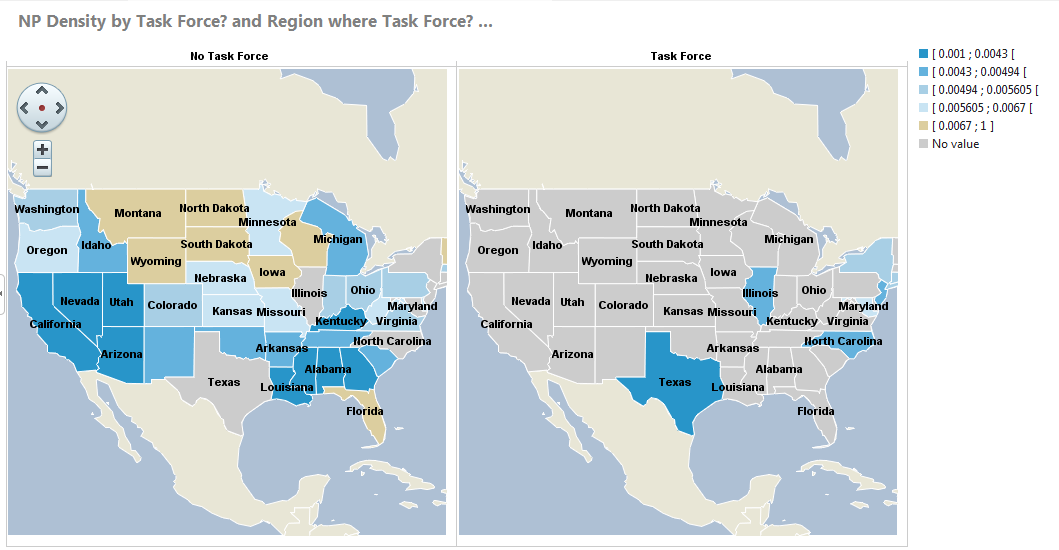 When I met with Lauren to walk through the results, she was incredibly impressed with the outcome.  While she was already intimately familiar with the state profiles and general national trending, the visualizations brought the data to life for her in a new and unexpected way.  We were able to identify some general clustering between the nine task force states which will provide a good baseline for further research, and she was surprised that we found as much correlation as we did.  Despite this small victory, the full analysis revealed an overarching theme: when it comes to nonprofit contracting, states do not act in a highly predictable manner.  Neither size, nor density, nor a history of contracting issues can predict how a state will stack up in certain measures.  Sometimes states behave differently simply because of the human element.  All it takes is one or two motivated individuals to dream up a new way of collaborating and to align the key contacts, and the rest, as they say, is history.

This is really interesting!

Where did you get the data to create this?!

I hope we'll be able to look forward to many more visualizations from you Lauren!

Dr. Miltenberger and her colleagues collected the data online from various sources, including a nonprofit study conducted by the Urban Institute in the U.S.  They're in the process of writing an academic paper on the topic, so hopefully they can incorporate the visualizations in some way 🙂

Keep us up to date on if this ends up getting used in the paper, we'd love to share it on twitter, and follow the stories that are created in SAP Lumira!

Hi Lauren, this is really great. I wonder how cool would be if everyone of us starts to show the power of Data and Analytics to somebody outside of our Industry.

Keep it coming and thanks for sharing!

Lauren - Great work and very interesting. Great insights into how this works. Wonder if there is any correlation between results and tenure of Congress Person who reps state?

Lauren - what a great example of the impact we as SAP Professionals can have on our society! I'm sure there's so much that can be done around unlocking the complexity of govenment support for non-profits!  Great work Lauren!!!