South Padres Island, TX, 2001. Minneapolis, MN, 2007. Seattle, WA, 2013. Three towns in three different parts of the country, yet inextricably linked by a common type of disaster – a bridge collapse. In the Minneapolis event, 13 people died and 145 were injured when a routine evening commute over I-35 turned deadly and over 100 cars ended up in the frigid waters of the Mississippi River. 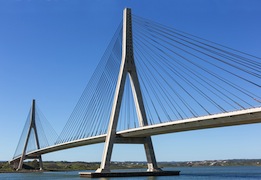 Even though bridges are inanimate hulks made of steel and/or concrete, they tend to behave like organic beings, responding imperceptibly to the impact of traffic, weather or even poor design. Each time a car or truck thunders over it, a bridge strains, vibrates, deforms, tilts, displaces, cracks and in the process is irrevocably changed. Being able to measure and track these tiny changes is critical if we are to be able to predict which bridge needs modest repair work, which one is in imminent danger of collapse and which one will still has decades left to go. And that is where Big Data comes in, but more on that in a bit.

The US Dept. of Transportation maintains an exhaustive National Bridge Inventory that tracks over 600,000 bridges nationwide of which about 25% are classified as deficient. To be included in the registry, a bridge has to be more than 20 feet long, be used for vehicular traffic and must have a road passing above or below it. There are 2 basic types of deficiency classification that are used: (a) If a bridge doesn’t meet today’s standards (e.g. no shoulder), it is labeled as “functionally obsolete” (about 85,000 bridges or 14% of bridges fall in this category) (b) If the bridge includes a significant defect, which often means that speed or weight limits must be put on the bridge to ensure safety, it is labeled as “structurally deficient”. This is a 9-point scale and only an evaluation of 4 or lower qualifies a bridge as being tagged as “structurally deficient” (about 67,000 or 11% of bridges fall in this category).

The financial impact of fixing deficient spans is hardly trivial and is estimated to be about US$76 Billion, according to the bipartisan Eno Center for Transportation in Washington DC. The funds for bridge repair typically come from the Federal Highway Administration’s Highway Trust Fund which raises them via a gasoline levy of 18.4 cents per gallon. However, with the emergence of more fuel efficient & hybrid vehicles, the money being brought in is nearly not enough to address the mammoth repair bill facing the nation. On top of that, this gas tax has not been raised since 1993 and given the current political dynamics is unlikely to happen anytime soon. Not surprisingly, the Highway trust Fund is estimated to go bankrupt by fiscal 2015, according to a recent report by the US Congressional Budget Office.

Until recently, the only way to assess the state of a bridge was to manually inspect it, which is not only expensive (and fleeting in an era of budget sequester) but also of limited effectiveness since the human eye is not very good at identifying microscopic changes. Like everything else, however, technology, more specifically Big Data technology, is changing this as well.

Strategically placed sensors can now measure the various factors that impact the structural integrity of a bridge, including things like traffic load, weather, seismic events and even the physical properties of core components like steel & concrete. As part of a sophisticated bridge monitoring system, these sensors make it easier to both record the readings and to communicate the data to a central monitoring station, where analysis can be performed in real time to determine exactly what is going on with the span. In areas that have frequent seismic activity (e.g. Northern California) or massive traffic volumes (e.g. the Brooklyn Bridge), these sensors can be a critical tool in managing such vital infrastructure. The emergence and maturation of real-time technologies like SAP HANA can help authorities in keeping a very close real-time eye on the state of any given infrastructure, especially in cases where severe natural events can dramatically jeopardize the integrity of a bridge and impact public safety (e.g. after a flood, tornadoes, earthquakes etc). Having access to such depth of data can help administrators make the right decisions when it comes to allocating their limited budget and fixing infrastructure that has reached the end of its design life.

After all, no one wants to build yet another “Bridge to Nowhere” when major spans that carry hundreds of thousands of vehicles each day remain structurally deficient and in danger of catastrophic collapse.