An Introduction to SMP Kapsel

A few weeks back I posted a teaser here which introduced Kapsel, a set of SMP plugins for Apache Cordova. At the time, I couldn’t say too much about what we were doing as the product hadn’t been formally announced yet. It’s closer to launch, so I can share more details with you now.

Kapsel is a set of plugins for Apache Cordova which adds SMP capabilities to a Cordova application. The plugins provide a subset of the capabilities provided by the SMP Hybrid Web Container (HWC); this is only an initial release, so additional capabilities will come over to Kapsel over time. Kapsel consists of the following plugins (in alphabetical order just because I like sorted lists):

The following diagram illustrates how Kapsel fits into a Cordova application architecture: 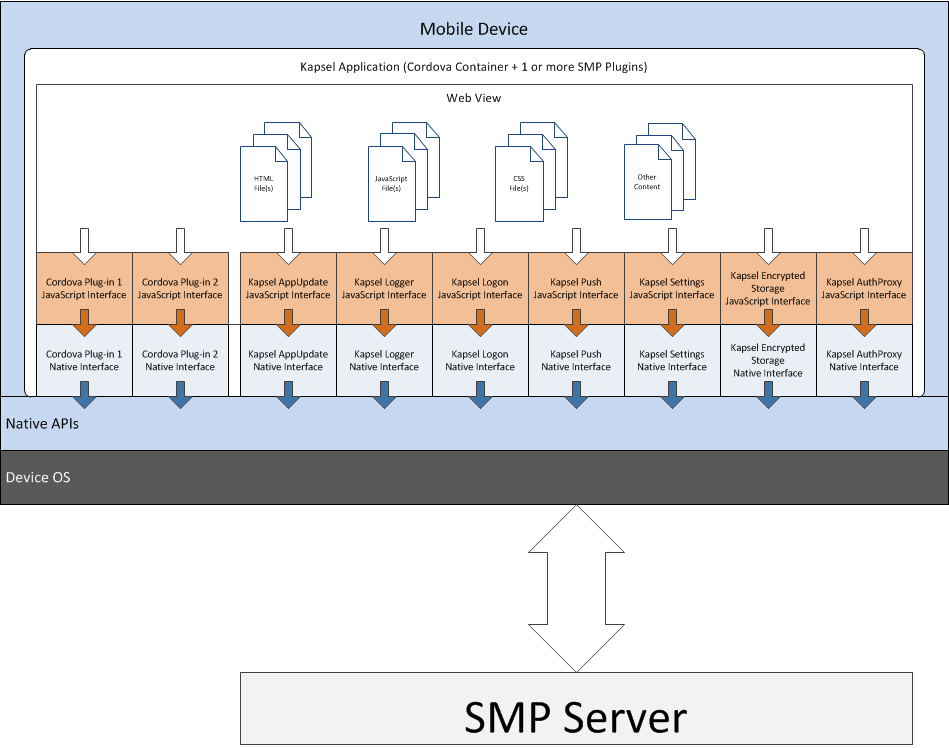 For some plugins, the SMP server has special server components which work with the Kapsel application to accomplish certain tasks (such as application registration, authentication, application lifecycle management, push notification and remote support). The server and client application work hand in hand to implement these features.

In the sections that follow, I’ll describe each plugin.

The Logon plugin is Kapsel’s cornerstone plugin; it manages the application registration and authentication processes with/through the SMP server. Most of the Kapsel plugins rely upon services exposed through this plugin, so you will find it installed automatically when you install other plugins.

Logon is essentially a Cordova plugin wrapper around the Logon capabilities exposed by the SMP Mobile Application Framework (MAF). Logon will interact with the Afaria client (if it’s on the device) as well as the Client Hub application (another new feature of SMP which will be described elsewhere) in order to understand the environment’s security configuration and to load certificates (Afaria) and share credentials across applications (Client Hub).

I’ll show you at the end of this article how to use the Logon plugin in your applications.

There are certain security-related tasks which the desktop browser takes care of for you, but the Cordova container does not. For example, there’s currently a bug in Cordova which causes a web application to not receive the HTTP error returned from a web server when incorrect credentials are passed to the server during authentication. Kapsel’s AuthProxy plugin provides an alternate mechanism for dealing with this particular issue and also adds capabilities that are leveraged in certain security scenarios such as Mutual Auth and in SiteMinder environments.

Many enterprise mobile applications handle sensitive information and developers have to have a way to store the data in a secure manner. Cordova developers can use the local storage APIs exposed through modern browsers to persist application data, but it’s not secure. The Kapsel EncryptedStorage plugin adds an encrypted key/value pair storage option to Cordova which is non-blocking and uses the same API method signature as the browser’s local storage option.

No mobile application is perfect; developers need a mechanism which will allow them to collect information from a mobile application while it is running. The Kapsel Logger plugin ads the ability for an application to write log entries which can be automatically uploaded to the SMP server for analysis. Developers build in support for Logger and an administrator can remotely set the appropriate log level from the SMP server – cranking up or cranking down settings which control the amount of information which is written to the log to be remotely collected by the server.

Kapsel is part of the SAP Mobile Platform (SMP) 3 SDK and will support Android and iOS at launch. Support for additional platforms such as Microsoft Windows 8 and BlackBerry 10 are on the roadmap. Kapsel should be available in mid-November, 2013.

Kapsel supports Apache Cordova 3. As Cordova is one of the fastest moving open source projects on the planet, we’re going to have some work to do to keep up. Right now Cordova is releasing 11 versions a year: 1 major version and 10 monthly point releases in-between (the project takes a month off after a major version release which usually happens in the July timeframe). To accommodate this, the Kapsel development team is going to have to move fast to keep up. We’re still working through the plans for this, but as Cordova is updated on a (mostly) monthly-basis, we’re going to have to test against new releases and find a way to deliver updates to customers in a similar cadence as the Cordova project is working in. Stay tuned for additional details on this one.

What about the Hybrid Web Container?

Kapsel is a new hybrid application approach for the SAP Mobile Platform. Our customers have made an investment in the HWC and have many applications in production. The HWC continues to be a supported part of the platform.

Kapsel and the HWC are different; they are both hybrid containers, but are based on different technology. They do different things and they do some similar things in different ways. The HWC for example is a proprietary container that has its own APIs but also supports the Cordova APIs. Kapsel is pure Cordova with some special SMP seasoning added. The HWC delivers the entire web application during an update where Kapsel delivers only the changed files. Kapsel supports only a single web application where the HWC supported many (you can do the multiple app thing in Kapsel, but you’ll need to write a wrapper app which provides a menu and run separate sub-apps within that shell to get the multi-app approach).

As you can see, Kapsel provides a broad set of capabilities which help developers build enterprise applications for Apache Cordova. Now that you know what Kapsel is and does, let me show you a bit about how all of this works.

Since the Kapsel plugins are standard, every day Cordova plugins, they install and used the way you would use any Cordova plugin. Developers can use the Cordova CLI or plugman (both part of Apache Cordova) to install the plugins into a Cordova application. Cordova’s plugman is a tool for managing the installation of Cordova plugins into an existing project. As plugman is more for plugin and native developers, so I’m going to focus instead on the CLI in the example which follows.

where app_name refers to the name of your application. With that in place, add one or more Kapsel plugins as needed. For example, I know Logon is used in most use cases, so I will add it to the project by issuing the following command:

Now if you issue the following command:

The CLI will respond with the list of plugins which have been added to the application as shown below:

Notice how there is more installed than expected; in this case, the CLI added some core Cordova plugins (console, device, device-orientation, dialogs & inAppBrowser). CoreLibs is a utility plugin which is added automatically to every Kapsel project by the CLI. A developer would never need to add the plugin manually to a project.

Now, to use Logon in your application, you only have a few, simple things to do.

First of all, Kapsel uses an AppID to identify to the server which application definition on the server is being used by this application. So my application starts off by defining a variable which describes the AppID. The AppID on the server must match what’s entered here.

Next, the Logon plugin needs to know a little bit about its connection to the server. It’s smart enough to figure out a lot of things, but it sure saves time if you give it a little push:

What this does is essentially prepopulate fields in the registration dialog which is displayed to users during the initialization process.

All that’s left to do is make a call to the Logon plugin’s init method as shown below:

What init will do is figure out all sorts of interesting stuff about the environment’s security configuration (by asking the Afaria client and Client Hub application if available), setup and configure the DataVault, connect to the server to register the application connection and authenticate the user. As part of this process, the appropriate screens will be displayed to gather user input and manage the entire process.

The logonSuccess and logonError values passed to init are the names of callback functions which will be executed on Logon success or failure respectively. This API (and the other APIs exposed by the Kapsel plugins) operates this way because this is the way most of the Cordova APIs are implemented as well; with APIs operating asynchronously and executing success or failure via callbacks when done. Kapsel therefore works just like most any other Cordova API a developer may be using.

Logon’s screens (and associated flow) are built entirely using HTML5, so they can be customized by the developer to match the specific needs of the application and the organization.

This is just a hint of the capabilities Kapsel provides. There’s a whole lot more that I need to tell you about Kapsel, stay tuned for more information. I have a whole series of articles to write and post here to help you understand as much as possible about Kapsel. I will also be writing a series of white papers which cover several topics in greater detail.

I loved the features of Kapasel specially logger and AppUpdate, those has been a pain point for me atleast while developing and deploying Hybrid application. Just a question here , incase of OS upgrade like iOS6 to iOS7 do we need to build our app using latest cordova and then use Kapasel or this process will also be automated.

Kapsel is just plugins to Cordova, so you would approach this the same way you would for any Cordova application. You would upgrade your project and upgrade your plugins as well for the new OS. As much as Apple tries to make everything backwards compatible, that's not always the case and you may find you need an updated version of Cordova and possibly even updated versions of the Kapsel plugins.

I have SAPUI5 phonegap application in production for my client , i need to show them Kapsel features , how to get access to Kapsel API and what changes I need to do we currently on SUP 2.2 SP04.

You can find everything you need to know about that topic in my colleague Jens Koerner's post at http://scn.sap.com/community/mobile/blog/2013/10/18/demystifying-saps-ramp-up-process

Kapsel supports only a single web application where the HWC supported many (you can do the multiple app thing in Kapsel, but you’ll need to write a wrapper app which provides a menu and run separate sub-apps within that shell to get the multi-app approach).

Can you please provide more info on the Wrapper app for the Kapsel to support more than one app. Whether we should have a root app (main app) in Cordova and access other cordova apps from the root app? or how is it like?

This is just something you would have to build yourself - do it any way you want. Knowing that you have multiple web apps you want to run in the container, use whatever tools you want to accomplish your goal.

It wouldn't be hard to make a simple HTML-based menu where each item launches the start page for each sub-app. The only trick I can think of is making sure each sub-app has a link back to the main menu for devices like iOS that don't have an escape button.