Value based and operational related definitions

Every datarecord coming from the source structure runs through the start- and endrountine of a transformation. (Not necessarily only once!) Each of this process of the data is defined as a rulegroup.

The standard rulegroup is existing as default and it can’t be deleted but additional ones can be created. For each rulegroup there is an additional datarecord in the target structure.

The result of all rulegroups is merged in the target structure of the transformation and then posted to the target objects. (InfoCube etc.)

The number of records not necessarily multiplies by the number of rulegroups defined as the records get filtered by the identical keys. Key are created on the criteria of the  target structure/object by the system. 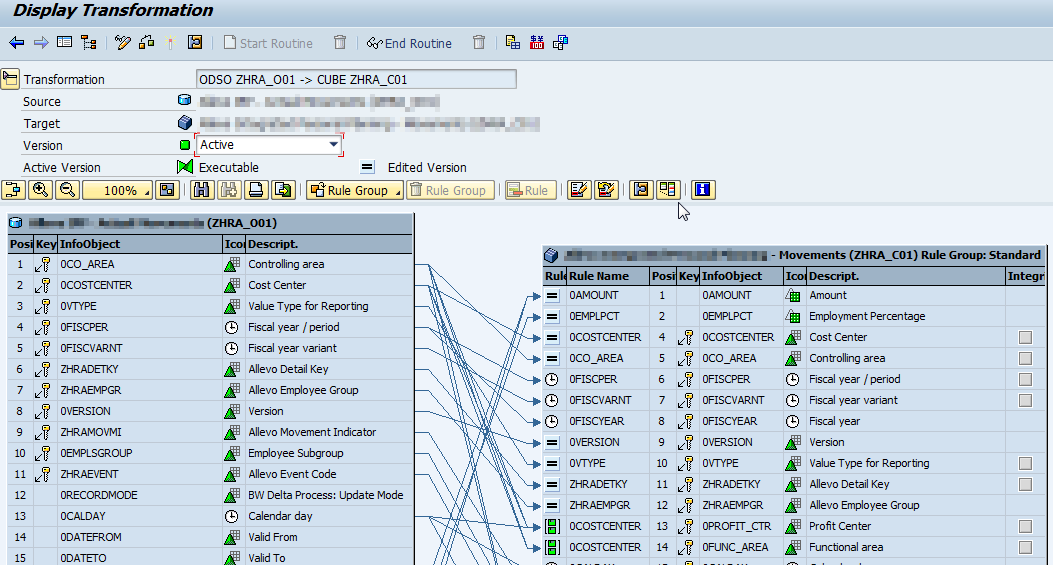 The graphical display also shows based on which input parameters the target fieldvalue is derived from. For example if a summation is done from two keyfigures of the source to one keyfigure on the target. Two arrows from the source fields merge into the target field. Fieldvalues can be derived through:

The example shows a split of amount between two sales groups with the help of a second rulegroup as described above.

This kind of data manipulations should only happen in the entry or datamart layer and it’s not recommended in the datawarehouse or transformationlayer as the records should be passed along without data manipulations. (Aside from deletion in start or endroutine).

The result of all rulegroups is merged in the target structure of the transformation and then posted to the target objects. (InfoCube etc.)

Thanks for sharing this topic.

thanks for sharing your knowledge. Rulegroups are always a very important topic.

A while ago, I had a roule group challenge after Dataflow migration of Cube 0PUR_C01 (Purchasing Data) http://scn.sap.com/thread/3367653 (keyword "DSO keys" 🙂 )

I haven't seen that thread but I like Ethan Jewett pretty clever solution of adding a constant value to each rule group/dso key..

Thanks for sharing the document..

It will useful when sombody new and understand about transformation..Thanks for sharing 🙂 .

Very informative!. Thank you for sharing 🙂

Another blog with good information. Nice.

Good one Martin 🙂 Thanks for sharing.

Well presented and thanks for sharing this Martin.

Nice document and thanks for sharing.