In this blog I want to introduce you to the concept of Event-Based Components (EBC) in Software development to develop better evolvable software. This concept is pretty good known in the C# community. But how about ABAP? I tried it out and want to share my experiences with this approach.

If we want to build evolvable software, then we must find a way to control or at least reduce the coupling of its components. Only if we have small components, which are as independent from each other as possible, we can better test und rearrange them. We speak of a high software quality, if

Coupling is a measure of the strength of association established by connection from one component to another. And we speak of Cohesion as the degree of connections among the elements of a single components. A component is a self-documenting entity containing classes and/or objects.

To depict Coupling Ted Faison uses a dedicated symbol to represent coupling in diagrams. It is similar to the <<uses>> we know in UML and means “… is coupled to…” Coupling is bad, but not all coupling is equal. Coupling affects…

We find the following types of coupling:

Coupling is called static, if the coupling between two objects effects build time.

This means, that to produce A‘s executable code from source code, some part of B must be present. This is the case, if A contains references to symbols in B, e.g. a constant, variable or method.

Coupling is called dynamic, if the coupling between two objects effects run time.

Now what often happens is, that with a class A you refer to a method of class B. Then you have both types of coupling. Static, because a class be must exists during build time and dynamic, because it must be present during run time too, when the object is created.

If you use an interface, you can remedy it somehow. Only the interface must be present at build time and the class with implements the interface is only needed during run time. But still A is coupled to the interface. 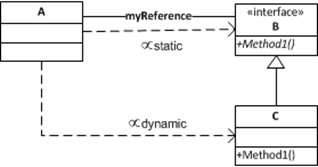 The Idea of Event-Based Components is to use events instead of coupling components directly with each other. Regarding coupling the following rules apply:

In the following I want to show you the meaning of EBCs using the example of a calculator implemented first in C# and then in ABAP. The specification if shown in figure.

Figure 6 – specification of the calculator

The following picture shows you the implementation in C#. We have two classes, which implement the UI and the business logic, which are not coupled to each other. The coupling only exists to the “main” class Program. In the class, the configuration takes place, when the components are “wired up”. This is the domain specific language (DSL) of the application. 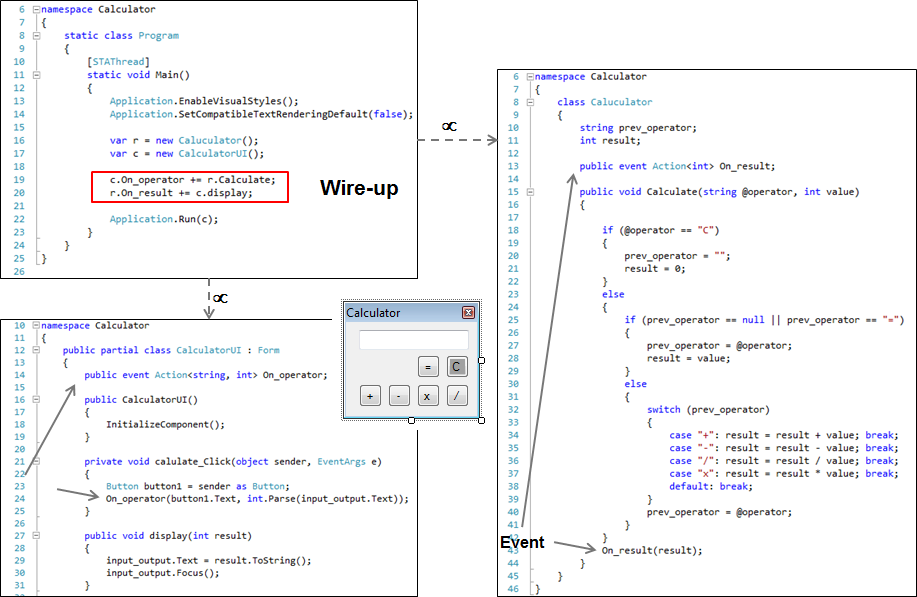 The figure 8 shows the same application written in ABAP. Unfortunately in ABAP we have must tell a method in which the event is, it should handle. Whereas in C# this information is only given when the event handler is set.

What can we do about that? Well what I did was to more or less write my own event handler. Instead of an event I declared am attribute with the name of the event, giving it the prefix “ON_” to tell the developer the special role of this attribute. It is a two component structure ZEBC_EVENT, which holds a reference to an object as well as a string, which contains the name of the method.

Figure 9 – Implementation in ABAP with own event handler

After building this prototype I was able to try this out in reality programming a full fledged transaction. And indeed testing and rearranging the components was much easier. The price you pay is that the where-used list wouldn’t show you the occurrences of the events anymore. But therefore you can be sure to find all occurrences in the configuration part of the object – and no where else.

I would really like to discuss this topic with you. Please leave a comment or join my Expert Networking Sessions EXP10916 or EXP10917 in SAP TechEd Amsterdam 2013. In the session I am also going to show the real live transaction build upon the principles of EBC.

There is a really easy way to fix this: Use an interface to declare the signature of the event. This removes the static coupling of the two classes while keeping the advantage of a statically checkable event signature. Take a look at how the SALV classes use this principle, for example in IF_SALV_EVENTS_ACTIONS

you are right - if events are used, it is definitly better to use an interface. The classes are then dynamicaly coupled and the coupling between the classes and the interfaces are static ones (see figure 5).

BUT the idea of EBCs it not to have any coupling of the classes as it is done in the C# example. And unfortunatly this not possible in ABAP.

I'm not sure whether this is "unfortunate". The dynamic method calls you introduce create all kinds of reliability problems by disrupting all static checks that might be performed by the ABAP compiler. I have so far failed to find any advantage of your programming model that might balance an issue that severe...

it is only unfortunate form the EBC point of view. If the price is to high for you to pay, than you should not use this progamming paradim or use interfaces as you suggested. I found it helpful to try it out and it gave me a new view of programming. During testing (= run time) I also found "broken links" , but I can live with it.

Seems like MVC concept, which is quite similar to the APPLE Cooca development framework. This is very joyable.