Analytics is a pretty hot topic these days. There’s a lot of talk out there around issues like social media, big data, and predictive analysis. It almost sounds as if our obsession with crunching numbers and analyzing statistics is a new phenomenon. 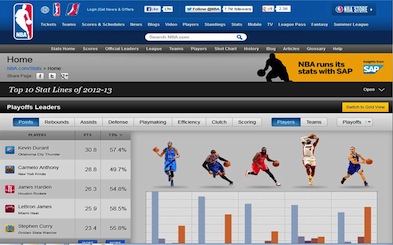 Don’t try selling that notion to a sports fan like me. I’ve been using statistics for years to analyze player performance, compare careers, and fuel endless arguments about who was the greatest at their position. I’d venture to say that our passion for sports statistics is probably as old as the games themselves. From the time professional games were first organized, we have been compiling records of every pitch, basket, goal, and touchdown. The National Basketball Association (NBA), for example, has been keeping statistics for more than 65 years, ever since the league played its first game.

In the past, studying box scores in the morning paper was a daily ritual for many a loyal fan. Today’s electronic media provides statistic-hungry fans far more options. But the sheer volume of the data still makes it difficult to get your hands on a complete picture of any sport. Earlier this year, however, the NBA created a website powered by the SAP HANA platform to do just that – to give fans instant access to a single online source not only for basketball’s latest statistics, but for more than six decades worth of historical data. Best of all, you can customize and analyze this sports data mother lode virtually any way you like. League officials figure this amounts to an astounding 4.5 quadrillion different data combinations.

Guess what? The NBA’s new statistics website has been a slam dunk success. It’s being followed by the media, league officials, NBA players, and more than 380 million fans worldwide. (How’s that for a statistic?) Now – anytime I want – I can do a quick check of the NBA’s leading performers or go on a deeper dive with some real-time data analysis. With the detailed shot charts and other data sets that I can filter, sort, and compare in endless combinations, there’s no basketball question I can’t answer. Like who do I really want taking the corner 3 when my team is down by 2 and there’s only a few seconds left on the clock?

But why just talk about it? See the statistics website for yourself at www.nba.com/stats. And when you’re done, check out this video and business transformation study to learn more about the story behind this remarkable resource.

The site will be even better when they integrate video and SportVU tracking data. Those features should be coming soon.

If you're interested, I wrote a "NBA Sabermetrics 101" blog to explain some of the advanced stats to the casual fan:

Great blog, Chris. Thanks for sharing.