Help a Moderator with his travels, again?

Last year, for the first time in several years, I did not make it to SAP TechEd in the fall. Next week, I will not be in Las Vegas for the 2013 event, nor will I be in Amsterdam for TechEd EMEA. For the second time, I am privileged to be attending TechEd Bangalore in December, as an SCN Moderator, an SAP Mentor, and an SAP customer. Two years ago, I planned and completed my first visit to India (see: Help an SAP Mentor with his travels? ), had a wonderful time, but did not expect to get the opportunity again. Life is often what you make it, so I’m returning.

First, a bit about my prior trip. My blog post pleading for community help remained generally unanswered, though I got tangential help, including tips from Vijay Vijayasankar, Shabarish Vijayakumar, Krishna Moorthy P, and Dewang TRIVEDI. To my surprise, the person who offered to help most directly was now-SAP Mentor, September 2012 SCN Member-of-the-month, and terrific blogger Kumud Singh. Without her graciously hosting and acting as tour guide, I would not have experienced India in quite the same way, nor would Marilyn Pratt or Jeanne Carboni have had the temple visit Kumud arranged. I’ve written here about the TechEd conference itself (see: Recapping and recapitulating SAP TechEd Bangalore and TechEd marathon – last minute preparations – Bollywood homage as just two examples on SCN), and externally about my personal vacation/holiday, especially the  3-hour bus ride with Abesh Bhattacharjee to visit his home town, wife Haimanti, son Ahir, and his parents. I learned not to touch anything I dropped – “visitors do not work!”

What to expect this year? I’ve altered the blog title from “Help a Mentor” to “Help a Moderator”, as I seem to have been spending more time behind the scenes lately moderating, training moderators, policing the site, and related administrative matters than being out front as a Mentor or presenter. My day job keeps me plenty busy, though we’re not on the bleeding edge (still upgrading one last 4.7 ERP system, and meanwhile retiring AS400 applications that seem to have the tenacity of dandelions). I’ve offered to help with hands-on sessions in Bangalore (a cool opportunity afforded SAP Mentors, though I’ve not heard whether that has been accepted or not. As in previous TechEd conferences, I’ll jump on the hands-on registrations when they open, unless I miss the memo, schedule too many overlapping obligations, and I’ll meet people from the SCN community.  Jocelyn Dart wrote about “Meet The Moderators” in a post called Meet the Moderator at #SAPTeched 2013 Las Vegas – C’mon I dare you! – I expect to be hosting similar meet-ups in Bangalore. Marilyn Pratt has asked me to attend her “failure” sessions, documented in Why Owning Failure Makes Good Business Sense.  I can talk about this, having had personal crises probably exacerbated by too much time helping others. Fortunately, I will traveling with my new partner Heather, who knew nothing about SAP before we met.

Where else are we going? Of course, I won’t be traveling halfway around the world to attend only one conference then head back. We’ve worked with the same travel agent that got me around India in 2011, skipping the American middleperson this time, to once again visit with Abesh (though in his temporary station in Pune, not his homeland), see Mumbai (where all SCNotties should be filmed), then a week in southern India, starting in Kerala:

What help do I need?  Before I ask that, I want to know what help I can give at the conference, before the conference, or after. What do people think about the changes with SCN?  Is there too much emphasis on HANA and not enough about interfaces, communications, and other business imperatives?

Where would you recommend we visit in the above locations? 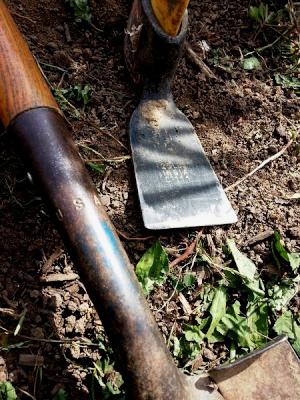 Wrapping up, the above shot illustrates my impression of the US, juxtaposed with India. My old shovel on the left has a wooden handle, but I’ve stressed it over the years to the point where the blade has begun to fracture; the newer pick mattock, barely showing the imprint of a foundry in India, has a plastic handle and so far I’ve not chipped the cutting edge. The tools can work together, as can the communities around the world.

What can we do to top Mark Finnern‘s post Best SAP TechEd Ever! Period! ?

Looking to partner with you in Bangalore as a host/guest.

If you want some tips in and around Cochin from this avid tourist you might want to visit my 2007 post about a unique inclusive village: Chendamangalam which is right outside of Cochin and was one of the highlights of my trip to that area.

You will find some of my fav pictures of that trip here:

I loved Bandipur for the close encounters with elephants and warm welcoming by the locals and Mysore and its environs are magical, not just for religious places and palaces but for spices and precious oils.

That's the thoughts of a tourists.

Now let's hear from the real knowledgeable folks: the locals.

You have a very good plan, Indeed!!!

In your list i could see periyar, actually there s no place as periyar, periyar is the wildlife national park in Thekkady, Thekkady itself a kind f cool place to visit 🙂 , been only once.

I can give you some tips for your Ooty trip, this is the only place from My state, have visited lots f time.

While in your Ooty Trip, if your time permits and if you are able to get first class tickets then plan for Mettupalayam to Ooty toy train ( Or ooty to Mettupalayam) , this is very enjoyable slow train service running since 150 years.. 🙂 , but its very difficult to get the tickets, only 20+ first class tickets and 140 second class tickets issued, but try your luck. else plan for Bus to Ooty, If by chance You could enjoy lots of elephants during bus ride too 🙂

Quite number of rose/natural parks are there, I have visited Botanical garden quite number f times, it is the one f best for long walking.  Other than that "Thotapeta Peak" , its the place ppl visit very common n Ooty,

If you plan for local town visit, inside Ooty, look around Tea Plantations and Cabbage/ carrot fields, grasp some fresh vegetables and fruits from markets 🙂

If your visit is less than a day, then end your visit by evening Boating in Ooty lake/ Bycara lake, then start back to other towns

if your visit plan kind of 1 day stay ( check for Hotel stay in Mountain Top), you can even plan for short visit to Mudhumalai National Park.

I DM you for the plans on Moderators meetups and rest.

With your planned and organized way, you may just visit greater no. of places in South India than me, even though I have been staying here for quite a while now. 🙂

The nicer part is reading your blogs sharing your experience of visiting those places. You always have a very different interpretation of things. It is good that you would visit the places before TechEd, we would have lot to chit chat.

This would be the first time that I would be attending TechEd as a Mentor and it becomes very special that my Mentor will be there!  (SAP Mentor Recursion!?)

Have a great time Jim - although we will miss you at SAP TechEd LV!

Jim - Cochin (Kochi), Periyar and Munnar .. in a nutshell, Gods own country as we call it. Kochi is my hometown and I sure hope you will have a great time there.

In Kochi, do visit the fort kochi beach. Try to see if you can book yourself into a homestay. Do not miss the food. Try the pork and beef dishes in Fort House restaurant near the beach. If you like vegetarian, try the local sadya (feast) menu. In short, do not miss our food.

Also, make a visit to the Ernakulam temple in the evening. You will get a feel of spirituality that I think is very distinct to Kerala. Its an unique experience.

Try the local Toddy at Mullapanthal Toddy Shop (not anywhere else).

Then I also recommend you to try a local ayurvedic massage treatment. You will experience the real meaning of the world being reborn thus 🙂

Periyar and Munnar is completely different and will be another unique experience.

I am so happy you are visiting my state and sad that I wouldnt be there to accompany you as I am right now in the US.

Have a great time and do let us know how it went.