During the activation of Downgrade Protection in Solution Manager ChaRM 7.1 many of you may have faced errors or at least warnings related to missing CTS Plug-in in managed systems.  If CTS Plug-in is not installed in Solution Manager and distributed to the managed systems, the Downgrade Protection functionality can’t work properly.

In this blog there is some information about this plug-in, why we need it and how to proceed.

We will hear a lot about CTS Plug-in when the next Support Package stack is released, because of the Central CTS functionality that will be delivered. CTS Plug-in is also necessary for CTS+.

What is CTS Plug-in

According to the Online Help,the CTS plug-in is available for the following releases:

The functions of the CTS plug-in may vary for different releases and SP versions.

The current version of CTS plug-in available for download in the SAP Marketplace is 2.0 SP08 and is delivered with SL Toolset 1.0 SP08. Check note 1787683 for more information about SL Toolset 1.0 SP08. But from what I understood, SP08 has only fixes and SP07 has patches for functions in Change Request Management for SAP Solution Manager 7.1 SP9, which is not yet available. Maybe that’s the reason why the Online Help and the SAP Note related to CTS Plug-in still consider that the current version of the CTS plug-in is SP06, delivered with SL Toolset 1.0 SP07.

CTS plug-in is available for the following releases:

For more information on SL Toolset, refer to http://service.sap.com/sltoolset.

This plug-in installs the included functions in the current system.

This is either an SAP Solution Manager system which acts as the CTS server, or

This is required to activate the CTS server plug-in on the corresponding system.

Why we need the CTS Plug-In in ChaRM

With SAP Solution Manager 7.1 SP05, Downgrade Protection (DGP) was delivered to reduce the downgrade risk in the managed systems. The DGP checks are performed when you release, import, decouple, assign a transport request or reassign a change document.

According to the OnLine Help, the following functions are available for CTS plug-in on SAP Solution Manager 7.1 and SAP NetWeaver 7.31/7.40:

The Change and Transport System allows you to manage transports of ABAP objects in your system landscape. Using the enhanced Change and Transport System (CTS+) you can transport non-ABAP objects using the CTS. In addition to this, you can connect further non-ABAP and non-SAP applications with the CTS to transport these objects using CTS. CTS plug-in contains the required functions to integrate these applications in CTS.

The new version of Transport Organizer Web UI is an improved browser-based WebDynpro ABAP application to manage transports of non-ABAP objects. You can use this UI to create transport requests, and get an overview of all transports in a system, for example.

To import transports of non-ABAP objects, the Import Queue Web UI is available. It is also a browser-based WebDynpro ABAP application that allows you to perform imports into target systems. Integrated import checks allow you to check for predecessor transports in the import queue or for potential downgrading transports.

If you are using Change Request Management on SAP Solution Manager you may be asked to distribute the so-called CTS Service plug-ins, which are part of the CTS plug-in, to the managed systems. Plug-In Management Web UI allows you to check the prerequisites for the distribution and finally distribute the CTS Service plug-ins to the managed systems where required.

As this blog is related to ChaRM, I will focus on the Distribution of the CTS Plug-in to the managed systems.

Note: To be able to use the functions contained in the CTS plug-in, the system on which you install the CTS plug-in must be configured as the domain controller and it must also be the communication system for your non-ABAP systems.

Next steps will be:

To start the UI, you need the authorization object S_TRANSPRT with field ACTVT and value 03.

You can use the Filter button to help you filter the systems you want to see. You can also personalize the list view and add/hide fields

To perform a validation: Your user also needs to exist in the managed systems.

Validate the system again after you configure the Import Destination.

You can click More Information in order to read additional information about Distribution of CTS Service Plug-Ins.

Transports imported into the managed system: 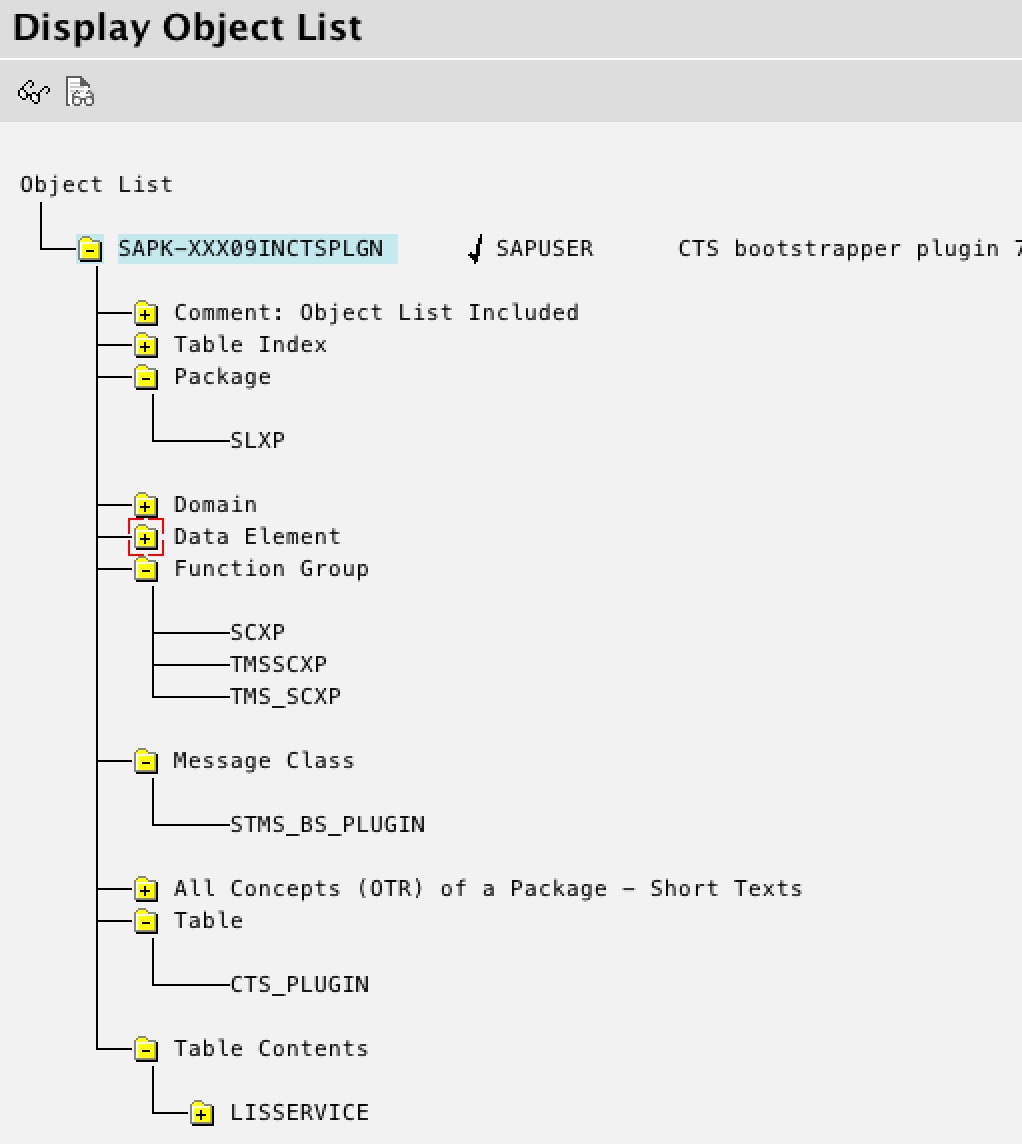 If you cannot update your SAP Solution Manager to at least SL Toolset 1.0 SP07 (CTS Plug-in 2.0 SP06) and don’t have the Plug-in Management Web UI, you can install or update the CTS plug-ins on the managed systems executing program CTS_DISTRIBUTE_PLUGINS on SAP Solution Manager which distributes the plug-ins to the managed systems. You may need to configure the Import destination in this case too.

The delivery of the CTS Plug-In is discontinued. It’s no longer delivered via SL Toolset.

I would also like to add for those that switched to a 7.21 Kernel having a patch level of 100 for the kernel (even though its newer then the min 7.20 tp/r3trans requirement) is not sufficient for CTS_plugin.

thank you for the information!

RFC only based communication should be available soon though.

yes, we need to have systems in the same domain or have a link. In the example used in this blog there was a link (in fact I only had managed systems and SolMan in the same domain when I implemented ChaRM to control changes of an R/3 4.6C, because it was required in order to make ChaRM work properly).

<update> Apparently RFC communication should be available as from SolMan 7.1 SP8 with CTS Plug SP8. </update>

Thank you very much! 😉

I am currently working on CTS+ for Transporting non-ABAP objects in SAP Netweaver Portal Landscape.

I have done one implementation of CTS+, and never noticed about the CTS Plug-In before.

Right now I am working for another customer for CTS+ Configuration for Transporting non-ABAP objects in Portal Landscape. Environment is same for the clienteles i.e. Solution Manager 7.1 SPS08

As mentioned, I just noticed about the CTS Plug-In and gone through the details.

Please help me understand, what exactly does CTS Plug-in offers.

1) Is it required for CHARM?

2) I learn that, onwards SOLMAN 7.1 SPS05, CTS Plug-In becomes mandatory, and I have been working on SPS08 for CTS+, so subconciously CTS Plug-In was still in the system. But does CTS Plug-In plays any role to configure CTS+? Because I have already done CTS+ configuration for one customer in same environment i.e. SOLMAN 7.1 SPS08 and never came across CTS Plug-In as mandatory requirement for CTS+. Please let me know what CTS Plug-in exactly serves?

@Akshay, I believe its only required for Downgrade protection within Charm.

As for the CTS Plug-In residing on SolMan or a 7.3 system, I believe is for the cCTS technology that SAP has been keeping under wraps for a couple of years, the bootstrap being the other half is what is pushed into your remote systems.  Having both pieces in place I believe will allow for cross system transport dependency checking, which in most cases is a coordinated effort in a company's change approval processes.

cCTS I have read should be announced at TechEd next week and will be coming down in SP10 of Solution Manager.

Thanks, I equally felt so that CTS Plug-in is an offering for CHARM but not CTS+.

Will look out more on CTS Plug-In.

While it may not be designed for CTS+, it may have tie-ins with cCTS (the next version of CTS+); with TechEd around the corner and SP10 being announced for Solution Manager, everyone will have a better idea of things tie to one another.

Also if you review your sicf services with the current CTS+ SP, you will noticed "cts_zenui" in the system; most appear broke or mis-configured and don't allow you to do much, but interesting to review!  ℹ

I have an assignment to  have the Downgrade protection   activated for my  customer through our recently migrated  Solution manager 7.1 system(as of now no one is using it ) . It would  be helpfull if i could  get the steps of how we need to  perform this task. With the blog i  found that  CTS plugin's are necesary to  be pushed to  managed systems as well . So if they  is any  document or link  available ,could  you  help  .

I have a question. We have add new ChaRM landscape but we have not made domain link between this landscape and our solution domain.

How should act in this case?

i am now supporting customer to enable ChaRM for ECC (Suite on Hana) system. the Netweaver version is 750, do customer still need to install CTS Plugin in the ECC system? is it already included in Netweaver SP?

could you please suggest? thanks a lot.

did you find out if the CTS plugin is still needed for 750?