This article explains how I became interested in the service generation code and the means to alter it, to suit my own requirements.

A bit of history…

I have identified certain generic ABAP-level operations that I wish to be able to re-use for any resource in services that I implement.

The originals were implemented as code-per-service, which led to a lot of cutting & pasting and duplication.

By changing the inheritance of my DPC base, injecting the new intermediate class into the family, I could inherit any new attributes, types or methods I implemented in ZCL_MGW_PUSH_ABS_DATA.

This was a good solution with one drawback – if the model was regenerated in SEGW, the DPC class is also regenerated. That regeneration would remove my inheritance so I would have to reapply it manually. Not too bad, as I know about this step – but what about in future when this went into another developer’s hands? I wanted a robust solution so I asked the Gateway product team if they could add this feature to Service Builder generation – otherwise I would need to implement a planned enhancement in the Service Builder code. They suggested I look at the Generation Strategy option and defined my own as a way of providing a solution.

“Great”, I replied, “where are the documentation and tools for this?”.

Well, the documentation was a no show (perhaps it exists somewhere, in German?) but Martin Bachmann did point me to the configuration area. From there I was able to figure out how to resolve my planned enhancement into a configuration option instead (with some code still needed).

Since there is nothing out there about this at the time of writing I thought it would be a good experience to share.

Yes, that’s right! It’s actually possible to change some of the Service Builder functionality by altering the plug-in elements.

Word of warning: this is not an activity that should be undertaken by someone without advanced developer skills. What I am doing here is a fairly lightweight change, but it would be possible to radically alter (and damage) your service builder installation and the service generation without due care and attention.

A bit of experimentation…

If you are still reading, you obviously like to live dangerously. 😎

This is a cross client configuration area, so you have no fail-safe in a backup client.

There are various nodes that can be changed but the one that jumps out at me is the ‘Generation Strategies’ node – nice and obvious.

However, it belongs in the ‘DM plugins’ node set – what is the parent I am needing to work with? I’m pretty sure it’s /IWBEP/GEN based on it’s description but I also check the content of the ‘Generation Strategies’ node.

I’ve noticed the generation strategy as an option when creating a service but it’s always one choice – ‘0001’, so I’ve never really worried about it. Now, that single option helps me to confirm that I have the right node, because it only contains ‘0001’. I could be wrong but decide to carry on and revert my work if I’m wrong.

Note: this only makes a choice of ‘9000’ possible, it doesn’t actually have any further settings in this view.

Only one small change, but I can now check that I am on the right track. I chose ‘Create project’ in SEGW and find I now have two options for generation strategy.

I can choose my strategy, now how can I apply it?

Looking back at the DM plug-in setup for /IWBEP/GEN, it nominates class /IWBEP/CL_SBGN_PLUGIN as a delegate, so I’ll look at that.

I find the class has only two locally implemented methods, it’s constructor and CREATE_GENERATION_STRATEGY. The latter sounds promising
and contains:

Strategy ‘0001’ creates an object to manage the generation and returns it. It seems logical that I can do the same with ‘9000’ and a different object in the return.

So, what will my replacement plug-in need to do when ‘9000’ is chosen?

Looking at ‘0001’ logic, the object type returned is an instance of /IWBEP/CL_SB_GEN_GENERATOR.  I note that as another object that needs
changing.

Looking at  /IWBEP/CL_SB_GEN_GENERATOR, I find method GENERATE_DPC. So far, all the method names have been very helpful! However, that is now invoking a further class.

Within this second  “DPC generator” class I find what I am looking for in method GENERATE_DPC_BASE_ABST_CLASS. Here is a hard-coded reference to the superclass name /IWBEP/CL_MGW_PUSH_ABS_DATA. That’s all I want to change.

I now know that I have to alter three levels of the default generation strategy to make mine work.

Update Sep 2014 – this is indeed a potential problem; I’ve used my custom strategy since an upgrade of IWBEP and I needed to redo the copy & mod of this class to accommodate some new parameters added to some framework methods. My logic was still OK but the other ‘decoupled’ methods of the class were out of date 🙁

I also make a copy of the original /IWBEP/GEN, comment it as such and deactivate it.

ZCL_SBGN_PLUGIN needs to return a custom generator object based on /IWBEP/CL_SB_GEN _GENERATOR when the strategy ‘9000’ is chosen.

Now I have a problem; I need to use the same class basis as /IWBEP/CL_SB_GEN_GENERATOR  for the return parameter to work as the correct reference type, but inheritance doesn’t work as too many private methods are present, even though the class is not final.

Next, I look at what is needed for /IWBEP/CL_SB_GEN_DPC_GENERATOR and how I can alter method GENERATE_DPC_BASE_ABST_CLASS.

This class isn’t final but it is heavily privatised. I subclass it to ZCL_SB_GEN_DPC_GENERATOR but that gives me very little benefit and not a lot of security against version changes in the IWBEP component. All of the private methods are redefined and replaced with copies of the originals.

Since almost everything in this inherited class is a copy, I can change GENERATE_DPC_BASE_ABST_CLASS without too much concern.

Addendum: I’ve since found that the regeneration of a “9000 service” dumps. The cause was hard to find but the fix was simple. The inheritance change is also referenced in the redefinitions preparation.

So this also needs changing to avoid such a dump (another ZCL_SB_GEN_DPC_GENERATOR method).

Now that I have the final Z class built, I can return to ZCL_SB_GEN_GENERATOR and change its GENERATE_DPC method.

That is all of the class building and config done, so I just need to verify that it all works. 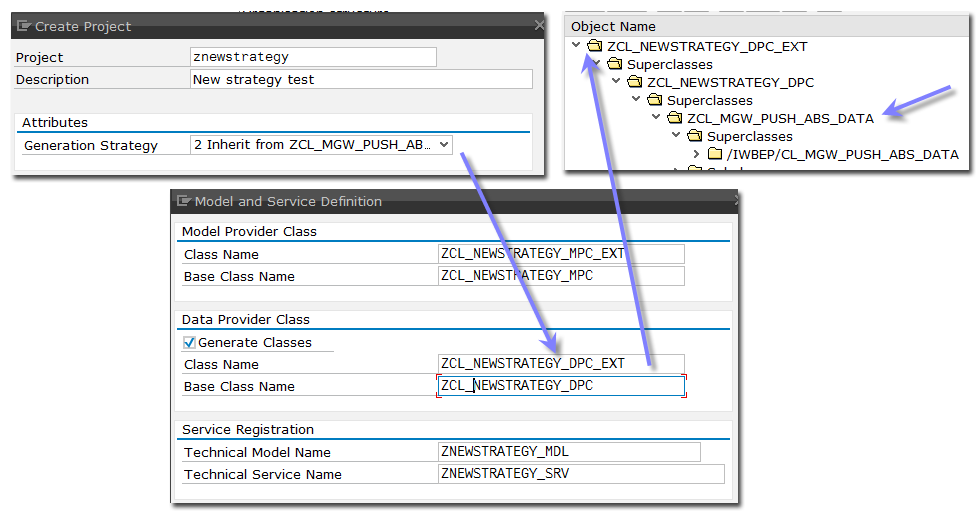 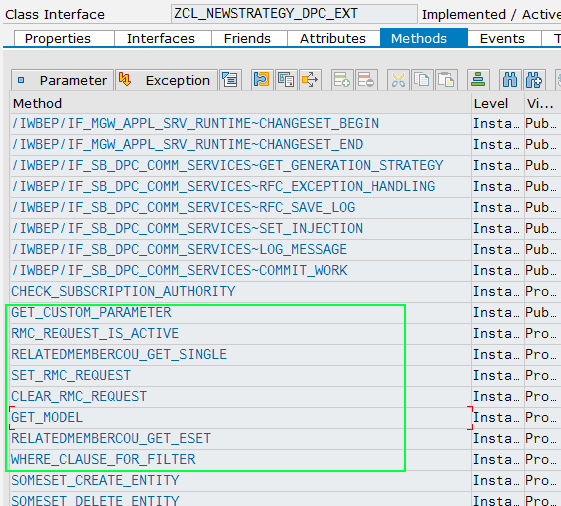 And my custom methods have all been inherited.

I hope this gives the reader some ideas about unlocking some of the power of a configurable builder tool.

thanks for the great blog. It explains really nicely all the steps and your findings.

Let me also comment on your remarks - even as everything is prepared for the opening we have not yet opend up this enhancement option via /IWBEP/SBS. This is also the reason why you had to do the adjustments as a modification and why there is no documentation (not even in German 🙂 ).

But for sure the requirements / feedback from you (and from other interested ones) are important for us - so if there is more demand for opening up the Service Builder out there we should look at this topic for one of the next SPs!

Thanks again for the Blog!

Nice blog! I was curious if it is also possible to change the default namings as proposed by SEGW. It is now proposing a value something lik z*dpc_ext, z*mpc_ext etc.

Can you give your own defaults over there? It would be easy to configure naming conventions in that way. The developer don't need to look for that anymore than.

I don't know if this is possible as it's part of the Builder prior to artifact generation, which I haven't experimented with (yet). There may be a configurable link to the dialog that provides default names for DPC, MPC, service and model, in which case you could substitute a copy of the standard tool.

I would still retain the prefixes and suffixes and maybe request the user (or use a rule) to provide the central part for local naming convention.

Nice blog Ron Sargeant..!!! Thanks for the information

Thanks a lot!!! I also tried to use own base DPC class but you describe my problem : ). Instead strategy enchantment I used redirect for each method into own family of classes with one base class. : ( But own base class really needed!!!!!

I should point out that the solution above no longer functions correctly in later versions of BEP (this example was done on SP4).  The class structure has changed meaning that the enhancements are syntactically  invalidated. This is not a problem if you opt to not use custom generation.

I have not gotten around to refactoring the code to fit newer SP's yet.

Your idea was rely good. For me it's not a problem "around to refactoring the code to fit newer SP's" I can do it by myself, but I will wait my next project with Gateway to try something new : ).