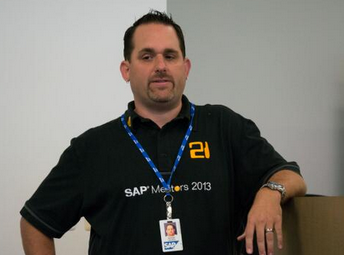 Yesterday was SAP Inside Track Newtown Square, organized by Rich Heilman, SAP Mentor.  Special thanks to Rich and Chip Rodgers for yesterday’s event.  Replays of the event are available here – they were available same day as the event.

Rich kicked off the event by providing a history of Inside Tracks, which started before TechEd usually as “community days”. Over 100 people registered for yesterday’s Inside Track.   After reviewing the agenda Rich explained that one of the speakers was ill and couldn’t make it, and if anyone was interested in presenting on the spot, they could.  ARI’s Thomas Marion presented BusinessObjects on HANA in its place.  Amazing to have a substitute session so quickly.

Chip reviewed the evolution of the SCN reputation system, now in its 6 months of gamification.

Chip Rodgers gave us a sneak preview of what to expect at TechEd.  Chip says TechEd is the annual family reunion for the community. SAP is rolling out a new mobile platform to make it more interactive and social, a sort of “gamification” of TechEd. 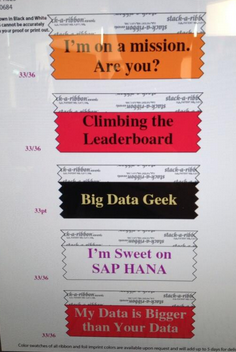 Chip explained that “Big Data” was also recently added as a topic to TechEd.

Picture of the badges is shown on the left – source of the picture is Chip Rodgers.

John Appleby gave a live demonstration of the Predictive Analytics Library on HANA.  He coded on the fly, ran into errors, but just the same he was successful in the end. He recommended reading the PAL library documentation and said his favorite button in HANA is the “Restart” button. He suggested starting small with PAL and build up.

Greg Myers distributed Lumira SP12 on flash drives, so attendees could try using Lumira along with him.  I saw a few Lumira applications being built.

Rajesh Ponnurangam of Maidenform showed how his company is using BI with HANA.  They are not an SAP ERP shop, and do not use BW.  He explained their definition of “Big Data” was 2 billion records, using BusinessObjects Explorer.  He said BusinessObjects Explorer is one of his favorite tools.  They use HANA to analyze point of sale data in real-time.

Interestingly, they limit use of Analysis OLAP at his company to only IT.  He said he is a big fan of SAP Idea Place ( ideas.sap.com)

Derek Loranca shared his company’s story of BI.  At his company, which tool plays “nicer” in the backend is more important than features.  They use BusinessObjects against DB2 data.

I was blown away by “The Internet of Everything, how it will transform the way business is done, and how SAP and Cisco can help” presented by John Zamierowski.  Cisco intends to build intra-car network by 2015; similar to enterprise – BYOD is a problem w/ car too.  “By 2025, all cars will be connected to internet” said John.

This lead to attendees sharing how many IP addresses they had a home – one attendee said he had 28 IP addresses.  Twitter chimed in with this:

@tpowlas It is easy to accumulate IP addresses. I’m up to 20 at home. Crazy, isn’t it!

John said the “IoE” Internet of Everything needs “real-time BI” and real-time decision making is key.  What I liked about this session is it allowed me to think “big picture”.

Last session (but certainly not least) was Gregory Misiorek sharing his SAP HANA MDX Proof of Concept story.  His slides also referenced “hypothetical accounting”.  He said a very true statement – we all have “big data” in SAP ERP – just look at the BSEG table (true).  He gave advice on how to minimize Amazon AWS instances (shut them down when not using).  He also referenced Installing Hana Client DB: Can not update ODBO during his presentation. He also gave a live demo of his proof of concept.

I really came away with learning a lot and I thank all the attendees, speakers and most of all Rich Heilman for another great Inside Track.

if you haven't been to one yet, what are you waiting for?

thx for including me in your recap.

I really enjoyed your session, Greg - I now understand your #AWSHANA tweets 🙂

Hi Tammy and all,

Thanks for a nice summary of how the event went and great to hear it was successful!

Excellent summary, many thanks.

Can't believe NSQ Inside Track is in its 4th year!

First was when we met Greg Myers and Derek Loranca .  Kudos to The specified item was not found. for initiating and Chip Rodgers for supporting.

First one I've missed ever and was sorry not to be with you all.

You were missed, Marilyn

Thank you for commenting

Rich has things running like a well-oild machine...kudos to him for sure.

It was a very informative day.  Like you, Tammy, I was blown away when I really thought about the impact of the Internet of Everything.  I had thought about it superficially at a higher level, but the details in that presentation really brought it home to me.  Just imagine what kind of interconnected world will be in store for the next few generations!

Thanks for all the organizers and all the speakers who made this day possible.  I look forward to #5!

Love the connections of SAP to Cisco and IoE (Internet of Everything ... people, data, process, things).  Watch for more on this, and more on SAP + Cisco around HANA... there's a lot going on!