This is part of a multi-part series addressing myths about SAP Screen Personas.

When people talk about “improving SAP”, this can take a number of different dimensions. It could be usability, it could be aesthetics, or it could be performance. The myth about SAP Screen Personas improving SAP performance could be a misinterpretation of how it actually changes the product and user experience.

SAP Screen Personas is a screen personalization solution that allows companies to personalize their SAP ERP screens for different user roles. The focus of the product is on allowing people to make screens more intuitive, thereby improving user productivity. Since people are faster at performing their job functions by using Personas, this could be perceived as improving the overall system performance.

When you talk about SAP “performance,” you should consider a system that includes both user time and computer time. To measure this, observe a person user completing a transaction or series of transactions to complete a typical business process on an unmodified SAP screen. Then, measure the person again running the business process using SAP Screen Personas.

Which will be faster in this case? It depends. 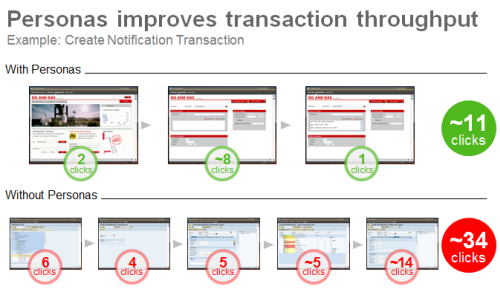 Both SAP Screen Personas and SAPGUI for HTML (WebGUI) are user interfaces build on the internet transaction server (ITS). Historically ITS connected to the application server through an AGate component while the HTML output was created using a component called WGate – nowadays ITS is generally used as an integrated ITS running inside the application server. This improved the performance of SAPGUI for HTML greatly.

Architecturally ITS still translates the SAPGUI screens into an HTML stream – which in turn is send to the client. The time this takes depends greatly on the amount of information required to render the screen. If you are looking for the best possible SAP Screen Personas performance you should always start out by ensuring that large tables and value sets are reduced to the necessary minimum – to ensure fast processing by the ITS.

Generally the amount of data transmitted and the ITS processing time (see ITS sizing guide) are comparable between SAPGUI for HTML and SAP Screen Personas.

If you execute a script that automates a number of server actions using scripting in SAP Screen Personas you might see a surprising jump in performance. This is caused by executing numerous steps entirely within the ITS without requiring additional round trips. Since the intermediate screens don’t need to be send to the client their processing is minimal and performance improves.

What are some of the ways that Personas can make SAP run faster than an un-modified screen?

Reducing round trips to the server to retrieve data

Making the user faster in their work

So, does SAP Screen Personas improve SAP Performance? Yes, but not necessarily in the way you may have thought about this.

In the next post, we will explore myth 3, about which screens Personas can modify.

thanks for the post. Very valuable insights. So far I looked at scripting only at a way to reduce the required user interaction (less clicks). But you are right - as the screens do not need to be rendered it also reduces the number of round trips and therfore boosts performance.