This article is an extension of SAP Note 1775293 – Migration/system copy to SAP HANA using latest SWPM 1.0

Whenever we update the SAP Note, we will also write a few lines in this article. So, by using the feature “Receive email notifications”, you will be updated as soon as the SAP Note is updated.

In case you are using HANA Client software SP9 and you want to use virtual hostname. Please check oss-note 2141442.

An error occurs during the execution of the initial HANA Landscape Reorg:

This error only occurs for scale-out system in case the file “HDB_TABLE_CLASSIFICATION.TXT” does not exist on the export medium in the directory “ABAP/DB”. This is the case in older versions of the ABAP report SMIGR_CREATE_DDL. In case the error occurs just create an empty file like:

and hit the retry-button on the error pop up of the software provisioning manager . The error will be fixed with version SWPM 1.0 SP7 PL5.

Error during an installation/system copy involving a scale-out system whereby the tenant is not located on the master host.
Error message: System (Last error reported by the step:Process call

The hdbuserstore on the SAP host shows the following entries:

In this example, the tenant is located on the node ld2431. The software provisioning manager enters the potential master hosts of the
scale-out system in hdbuserstore in descending order.If the tenant’s master service is located on a node other than the first node in hdbuserstore, and if
this first node can be accessed, the client tries to connect to this host. This action fails because the tenant is running on a different node.
The first node in hdbuserstore must be the node on which the tenant’s master service is running. To determine the relevant node, you can execute the following SQL statement on the system database:

The user store is then corrected using this command:

The client should then be able to successfully connect to the host. As soon as the node ld2431 fails, all services are moved to the next free potential
master host. The client automatically connects to this node.

The fix will be available in February.

Starting with SP9, SAP HANA supports so-called multitenant database containers. With this feature, it is possible to run multiple instances (tenants) within a single database. Tenants are fully seperated from each other.

We plan an update of software provisioning manager 1.0 SP7 in January 2015 to support further procedures like:

In case you are installing/migration into a SAP HANA Scale Out System please check the new note: 2041412

In case you are migrating a big system, the output of ABAP report SMIGR_CREATE_DDL might also become quite big.

In these cases software provisioning manager can run into an Out Of Memory error when checking those files.

As long as there is no new SAPEXEDB archive available, you can manualy put the R3load into the current archive, as described in SAP Note 1826587 – SAP NetWeaver installation using SWPM 1.0:exchange R3load.

In addition to the R3load fix, there is now an ABAP report available that checks potential tables in the target system. The report is attached to SAP Note 1991638 – Supplementary SAP Note to SAP Note 1990894.

The SAP Note also contains a PDF document that describes how to check the log files of R3load to find out if the Massloader functionality was enabled during import. The document also describes how to exchange the current R3load executable with the new version from SAP Service Marketplace. We recommend to use the latest R3load version for any import.

With the next version of software provisioning manager SWPM 1.0 SP4 PL8, the Massloader functionality will be switched off by using the R3load parameter:

To enable the Massloader functionality again, in case you are using the latest R3load executable, set the environment variable HDB_MASSIMPORT=YES before you start software provisioning manager.

A fix is now available. Right now, it is only available as single R3load executable. You can download it from SAP Service Marketplace where you download SAP kernel patches. The patchtext of the fix is:

Unfortunately, setting the environment variable HDB_MASSIMPORT=NO doesn’t switch off the Massloader functionality in all cases. To switch it off completely, you have to add the argument -loadprocedure dbsl to the R3load call.

In case you need further assistance, open an OSS message.

This only affects R3load executables when they are used for an import into an SAP HANA database.

Due to a problem inside of the R3load Massloader functionality, we strongly recommend to not use the functionality until a fixed version is available. To make sure the functionality is switched off, set the following environment variable before you start the software provisioning manager:

We also recommend not using any R3load version for SAP HANA database which was compiled after November 2013. To check the version, you can call ‘R3load -version‘. Check the entry “compile time“.

We will update this blog as soon as a fixed version is available.

In case of an import into a non-scale out SAP HANA database, software provisioning manager runs into a state where 0 jobs are running, but a lot of jobs are waiting.

The migmonctrl part of migmon regulary checks, if the jobs for the Column Store have finished – although, it does not check the “pre” job of a splitted table. In case a “pre” job fails, the dataload jobs don’t get started and remain in state “0”. Due to this, migmonctrl assumes that the Column Store related jobs have not yet finished.

In migmonctrl.log, this looks as follows:

Number of all jobs in process: 0

Jobs for specific Column Store tables are still active. Will not start Rowstore group yet.

In this case, migmon would wait forever, so this is a bug. As a workaround, once you made sure you are facing exactly this issue, edit the order_by.txt file as follows:

After that, migmon will start the group with the rowstore-related jobs. At the end, migmon will raise an error, because the “pre” job has failed. After solving the problem, you can hit the Retry button of the software provisioning manager.

In case the new statisticsserver of SAP HANA is activated, the installation fails with an error during the creation of role DBA_COCKPIT.

The import terminates and the system issues the
following message: “Exchange directory must be an existing directory”.

This is corrected with SWPM 1.0 Support Package 4 Patch Level 1.

The problem occurs only when loading scale out systems for a parallel export / import.

Performance problems can occur on Scale Out Systems during data import.

Fixed with SWPM 1.0 SP4 PL0 which is now available. 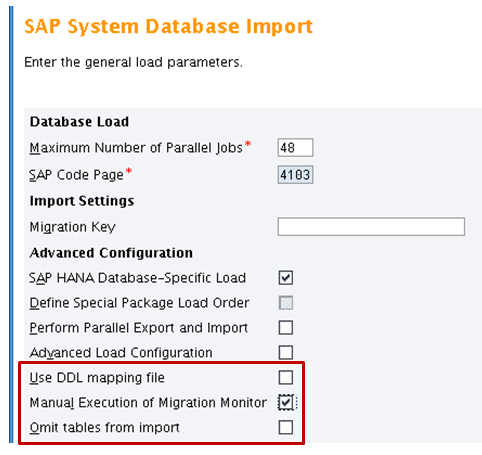