My first TechEd was in 1997 snowy Karlsruhe. Or may be even one before. We once were in a hotel in LA and the evening entertainment was a trip to Fry’s Electronics with a $100 gift voucher. That gift ended up bringing down the check out system and many including me left without even using it. Hope they have switched to an SAP system by now. It was a very surreal experience. We have come a long way from these early beginnings.

Since then I have been to almost all of the TechEds and there have been some really memorable moments. It’s often smaller things that stick. 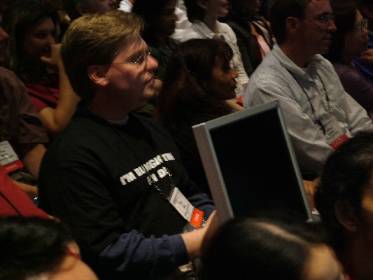 For example, seeing Thomas Jung super happy in 2005 when he was celebrated as top contributor and received a big flat-screen monitor. Back then those where rare and expensive. .

Craig Cmehil rocking the house on stage as the host of a demo jam. He is so natural, funny on stage and really connects with the audience, he could be a game show host. .

Matthias Zeller turning to me at the Las Vegas airport on the way out and saying: “You know, TechEd you used to go there and get some educational sessions may be meet some colleagues for dinner in the evening and then go home, but now with SDN and the clubhouse it is like a family reunion.” That just warmed my heart. Or remember the flash mob that Matthias Steiner and others organized to honor Marilyn Pratt as the extraordinary community leader she is.

Even the failure of our first unconference style BOF sessions in Munich 2005 built the nucleus of the thriving SAP community in Europe.

SAP TechEd is a totally well run, like a German-engineered machine. They have the educational part down. Lectures and two-hour or four-hour hands-on sessions on a dedicated laptop with the best teachers like Ingo Hilgefort, Rich Heilman and Thomas Jung, to name just a few.

As a developer—or a manager of a developer—I know where I would put my education dollars. Send them to TechEd. When he was at IBM, Vijay Vijayasankar would send his entire team to TechEd every year. Vijay told me back then that the boost in learning and morale would be greater and longer lasting than a big bonus.

I once interviewed him about it when he was still a manager at IBM. Sorry for the bad sound quality. Jump to minute 4:40 for his opinion about SAP TechEd.

This is just the educational part.

This year the organizational team is hitting it out of the ballpark. It starts with Nate Silver as the outside keynote speaker.

He is the revenge of the nerds personified. We all should carry him on our shoulders on and off the stage. I don’t think people have realized what he pulled off during the last US election. Calling correctly every race in the country. Silver played with the political pundits’ crystal ball and sent them back into a corner. He just kept an eye on them, corrected for their bias, nailed the predictions and rode off into the data-scientist sunset. You can see how that played out on Fox News that election night when one famous campaign strategist refused to accept the results that were handed to him by nerds in the back room. Classic.

Rumor has it that his new ESPN contract prohibits the web casting of this session, You have to be at TechEd and in the room to get it so why wouldn’t you be there?

The Vishal Sikka Keynote is also not to be missed. Over the last couple of years under his leadership SAP became a more technical company a much bigger part of our revenue is gained from our technical solutions like HANA. It will be really interesting to understand where we are, and where we are going. Wednesday morning there’s a fun 5K Fun Run/Walk. Bjoern Goerke is an avid runner so last year I pinged him whether he is up for running with the SAP Mentor wolf pack. Since he’s a good sport, he agreed and almost 20 of us one put on our running shoes and hit the early morning Las Vegas strip. With the nudging of Greg Myers and others we have an official 5K run/walk this year. I can tell you from experience that your concentration throughout the day will be so much better if you join us there.My goal this year is avoid the red head 🙂

That evening (and I am only slightly biased), my favorite event will be back: the SAP Jam Band. Matt Harding and musician friends will play some songs that everyone knows and can join in singing and dancing.  Yes, it’s a no-spectator event that starts at 6 pm sharp. As the regular activity on the show floor winds down, everyone loosens up, sings along, dances and has a good time. Check out the llikely song list with lyrics on YouTube for you to practice.

Right afterwards, Marilyn Pratt is cooking up something cool again. She has quite the track record popularizing inclusion, design thinking and now celebrating failure at the Fail Fair. The name alone should make your come: I have a vision that little goths will take you on a fail ride, and you will come out dizzy and a little drunk from the amazing ideas that you heard. By the way, if you want to practice failing fast and picking yourself up afterwards, there is no faster and more frequent way to fail than juggling. I will have six juggling balls with me at all times, so come up to me and we can pass and fail fast together. Passing is also where the juggling gets really interesting.Oh and I just remembered the perfect video shot by Chris Solomon of me trying to juggle glow stick rings after the Go Go Dolls concert at TechEd 2007.

On Thursday evening, after your hands-on session is over, you may want to rush to the Wynn casino next door for the Enterprise Geek dinner. It’s a loose pay-your-own-way get together, just follow/go where the folks with the black shirts with numbers on them are. If you don’t know any of them, step up and introduce yourself. But don’t hang out too long, as Imagine Dragon is going to play later that night. I think it is the best band we have ever had at TechEd.

I am exhausted just writing about all this cool stuff going on at SAP TechEd in Las Vegas. Kudos and thanks to the SAP TechEd team you have outdone yourself again this year. Make sure to come rested, skip the slot machines and save your energy so you can fully embrace and enjoy all the amazing things that we are offering. I am wearing the 88 SAP Mentor shirt. Don’t be shy and walk up and talk to me. See you there.

Want to hear more suggestions on what to do and how to best prep for SAP TechEd?

Check out the replay of the webinar.

Excellent post on the SAP Mentors activity at TechEd as well as flashbacks to previous years.

FYI I wrote an SCN blog about Nate Silver's fascinating journey from baseball blogger to geek celebrity if anyone's interested: How Nate Silver Brought Analytics to the Masses

Mark, you've done an excellent job to whet my appetite EVEN MORE for the upcoming SAPTechEDLV.

I'm looking forward to SAP TechED again. I feel it's getting better year by year so I'm all hyped up already to be there 🙂 .

Thanks for sharing memories.

Seems like nights are getting shorter and shorter at TechEds :---)

Ahh! Schedule was changed. I just (7PM PST) dialed in and found out that this is already done!

Do we have recording or anything? I am attending TechEd and would like to learn more.

Super sorry, there was an error in my first posting: "Monday 7pm" it said, what it should have said was: Monday 7th 1pm".

Will see you for sure! 🙂

What a great look into the SAP TechEd past - thanks.

I had a smile all the way reading this blog. Excellent! 🙂