The market for Fantasy Football players is a lot like the market for anything else. There are values placed on players when they enter the market, and those values inherently fluctuate with the wants and needs of the market. 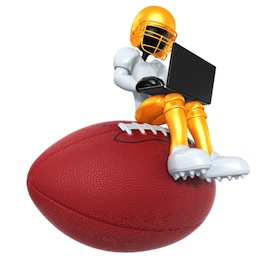 My father used to tell me, “It ain’t what it’s worth, it’s what somebody is willing to give you for it.” Understanding what other people are valuing highly is the approach one should always take to fantasy.

One key to winning in fantasy is constantly assessing the value of your team and upgrading your roster by trading or picking up free agents. By doing this one can find the players who are being undervalued in the market and most importantly to avoid players who are overvalued.

Players have a number that corresponds with their performance each week, which is the number of points they score based on how many yards they gain, or how many touchdowns/interceptions they throw. Therefore it is easy to look at a players past performances based on one simple metric.

One of the main virtues of big data is that it levels out much of the personal bias from management that might cause a person to make decisions with their heart, not their head. It also can serve as a predictive tool for the future.

SAP’s player comparison tools are great for looking at in real time how each player might fair in their next game. Since there are any number of variables that contribute to a players on-field success, SAP makes sure to take into account weather information, recent and past performance, the level of a player’s opponent, and even how consistently the player has performed well.

Volatility is a big word in the market, but it is rarely used in fantasy football, which is odd because player values fluctuate as much as the stock market, sometimes more, from week to week.

Backup running back Bernard Pierce becomes worth more when the normal starter Ray Rice gets injured, as happened a few weeks ago. Also a players stock might rise for one week based on who they play.

If I have a player that is consistently giving me 10 points a week, and then he plays the worst defense in the league, he might be projected for 14. Also, an owner may have the best player in the league, averaging over 20 points, but this week he is projected to get 14 also. How good the player is becomes less relevant as other variables come into play.

The SAP player comparison tool can give even the most casual NFL fans really valuable analytical tools that help take a bit of that guesswork out of the process.

The inability to step away from a bad investment can wreck your team just as easily as not focusing on who ones players are matched up with from week to week. All the Montee Ball and Ray Rice fans from the beginning of the season will understand what I am talking about.

When a player is valued very highly in the draft like when an IPO is very highly valued, and then it underperforms your portfolio can really be hurt. But if you are diversified in other areas, you may be okay.

For example, if you picked up Ray Rice early and he got injured, but you made the savvy move to take Peyton Manning in the second or third round, you should still be in relatively good shape because he is the most valuable player in fantasy football right now.

When choosing your roster from week to week sometimes it is best to gauge how much you invested in a player and decide when you need to put them on the bench, and start another player.

Paying attention to the way the game has changed is essential. In recent years, because of new league rules on hard hits and new rules changes teams are throwing the ball more, meaning wide receivers are becoming more valuable.

Finally, remember that scarcity at certain positions can be a friend or an enemy to your team. Quarterbacks are very important in fantasy, but there are quite a few that perform at a high level. Since the game has changed to recognize that running backs generally work better in tandem, it means they will individually garner fewer points.

Some teams haven’t 100% embraced this fact, so some teams start just one running back, creating a scarcity at the running back position. Whether you stash good running backs on your bench to keep them from other teams, or there are not naturally many good backs available, the scarcity makes players more valuable.

So when making decisions in fantasy make sure to look at how consistent a player has been playing, keep an eye on who is available as a free agent, analyze if free agents and players current on your team are being properly valued, and don’t worry too much about a bad draft.

Football is my favorite game and so I liked to read your blog as it is related to football players and it was something new type of information.I appreciate the way you have written this blog.