To make it possible to ship SAP-HANA-specifc improvements of software provisioning manager more often than with the quarterly shipment of Software Logistics Toolset (SMP login required), SAP came up with a fast delivery strategy especially for this use case. The second version of this fast delivery method is software provisioning manager 1.0 SP3 PL6, described for migration experts in this blog.

This shipment contains many corrections that should make the migration to SAP HANA handier than before. After you start software provisioning manager, the improvements are available via a new folder in the product catalog: The folder is available for every database type.

The export peparation routine now only creates the export medium structure. As no DBSIZE.XML is necessary for the migration to SAP HANA, no R3szchk and also no R3ldctl are called during this procedure. After this table splitting dialog, you get the following new dialog that handles the R3ta_hints.txt file: 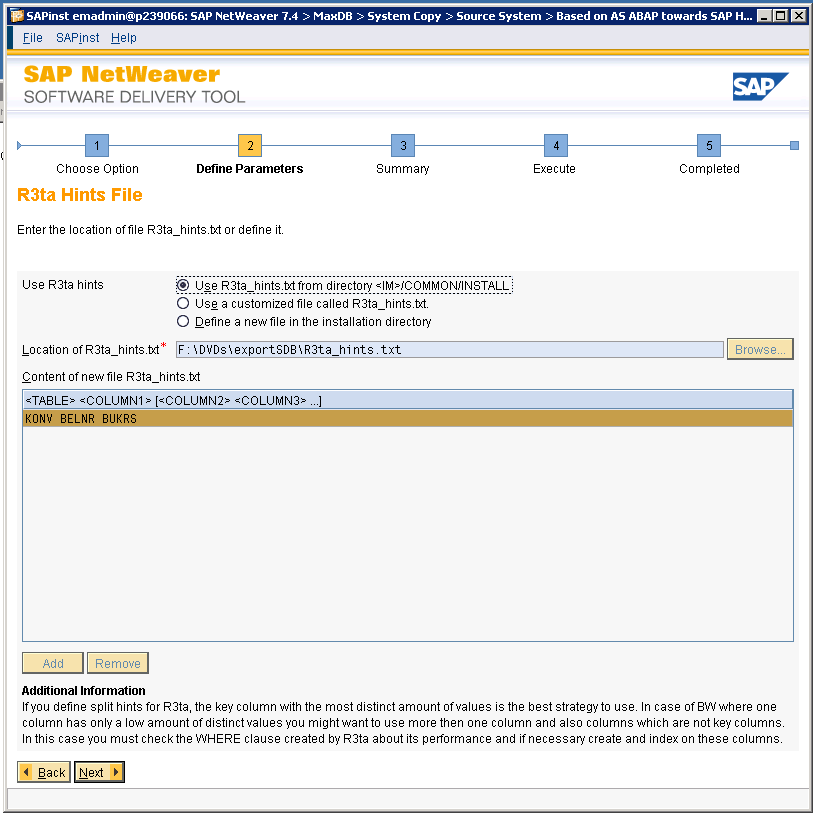 The database instance export routine contains most of the new features. It begins when you choose SAP HANA database as the target database type: 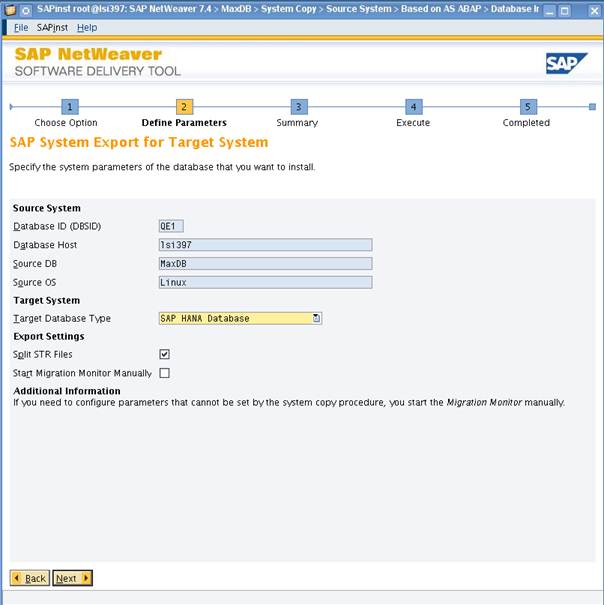 The next dialog is new: 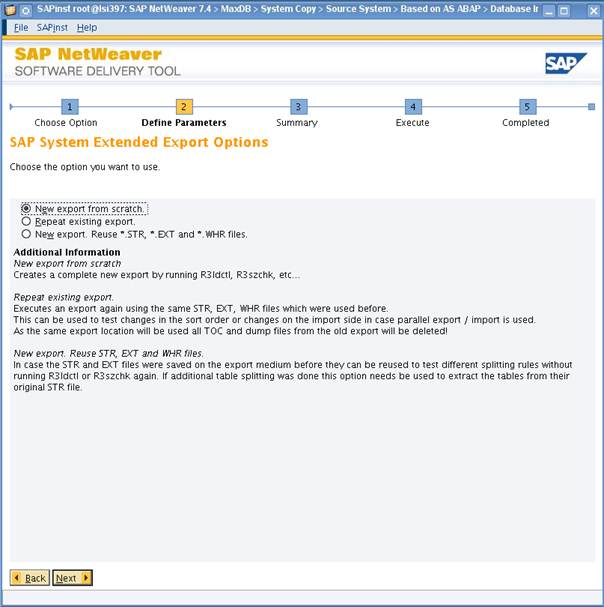 As you can read on the dialog, there are three options to choose from:

In case you chose New export from scratch or New export. Reuse STR, EXT and WHR files, you will come to this dialog: It contains one new split option called Number of Tables Limit. This new split feature runs after the other package splitting is done. It takes care that every STR file contains the maximum amount of tables or less. This is mainly for SAP NetWeaver Business Warehouse migrations, where you have thousands of empty tables in one STR file – this would result in that the execution of this package would still take 20 hours without being able to split the package, as it would have no size, because all tables are empty.

Of course, this option can also be used for non SAP Business Warehouse systems.

On the next dialog, if you choose Define Special Package Unload Order… …you will get this new dialog: 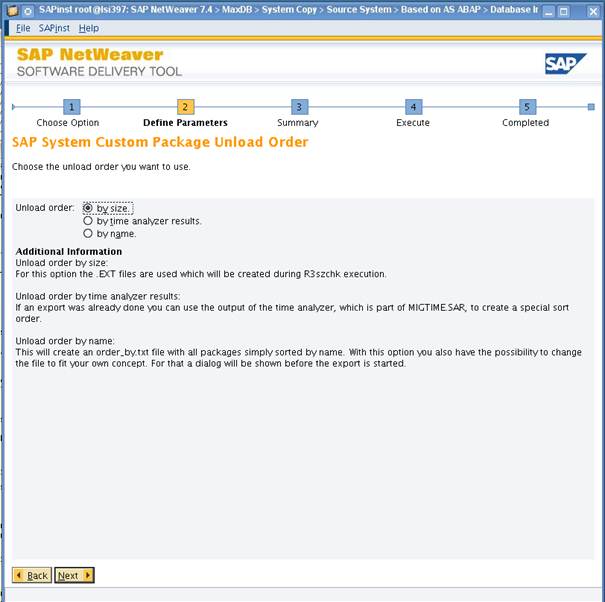 Until now, it was only possible to sort the export by name (which put tables like _BI* at the end of the list) or to manualy create an order_by file. Now, you have three options:

If you run the export the first time, you want to choose sort by size.

In case you run the export a second time and you have made no changes to the splitting, you can sort the export based on the time analyzer results.

When you choose sort by time analyzer results, you come to this dialog: 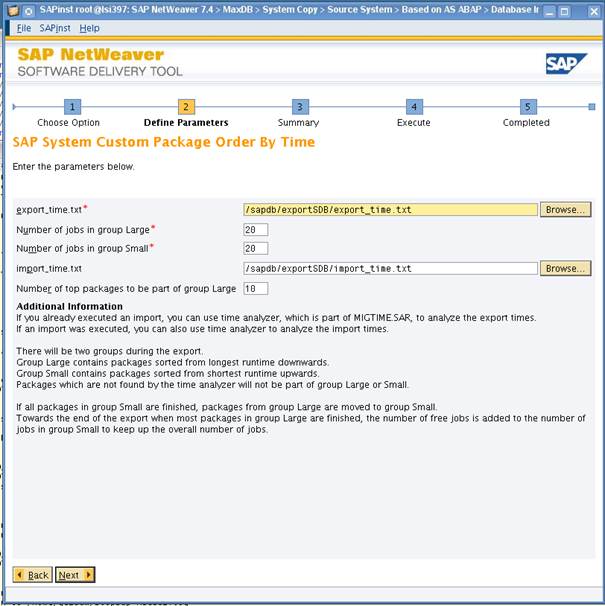 So not only the results of the export can be used to create an order_by.txt file for the next run, also the import analyzes can be used. This is because a long running table or package on the import side can take only a few minutes on the export side and due to this might be scheduled too late. So, the top packages from the import side will be put on top of group LARGE to get exported right from the start.

In case you did changes to the splitting, you still can choose the option sort by runtime. In this case, software provisioning manager sorts the packages by runtime and for those which are not in the file, they are sorted by size. Once the export has started, there is a file called order_by_visual.txt that contains the size / runtime data besides the sort order.

These two options try to support the parallel export / import. This means, you start the import as soon as as the export has started.

So right from the start, packages finish very soon (enabling an early start of the import), but also long running packages are started right away to not stretch the export.

The new strategy also moves jobs to keep up the amount of jobs you entered.

The amount of jobs on the export side is steady. They are not increased or decreased regarding the system load like it is the case on the import side.

This replaces the standalone version of createorderby.jar.

Migmonctrl got a few new features to keep the number of jobs up at the end and now also fully supports declustering.

Also, this dialog is back: 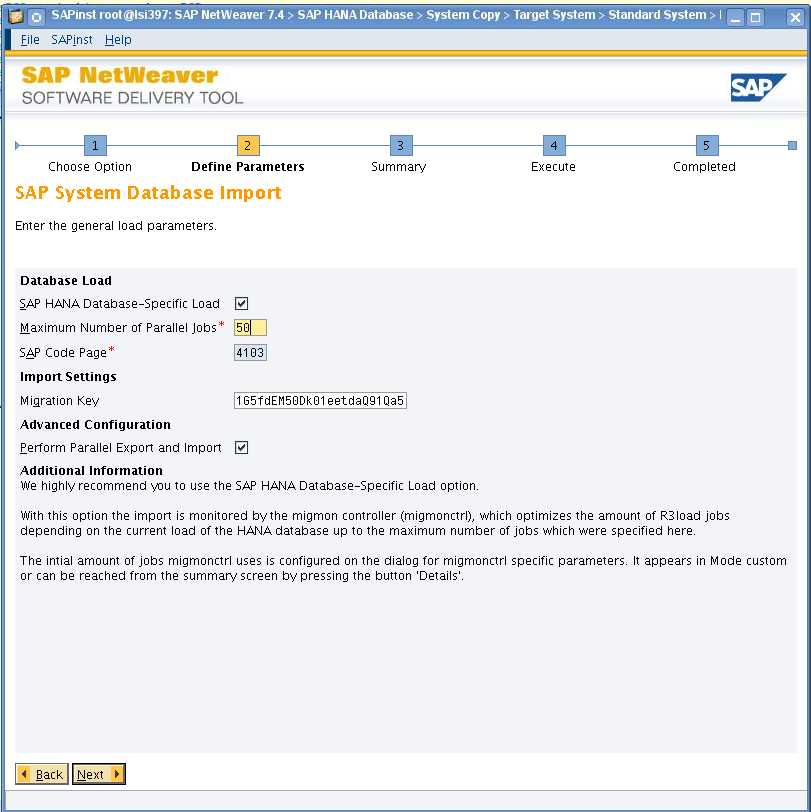 Maximum number of parallel jobs is the maximum of jobs migmonctrl will schedule. It is mapped to the parameter maximumJobNum of migmonctrl_cmd.properties.

Depending on the load of the database, it might be less if the load is high. Also, this amount is not triggered right from the start. Migmonctrl increases the amount until this amount of jobs is reached.

A tail –f migmonctrl.log during the import provides valuable information about how the tool is working.

In case you do an installation into an SAP HANA database you used before, we recommend using the option Initialize database topology instead of drop user, as it is faster and doesn’t trigger asynchronus garbage collection. But be aware that you loose all data with this option, so your schema should be the only one in this instance! 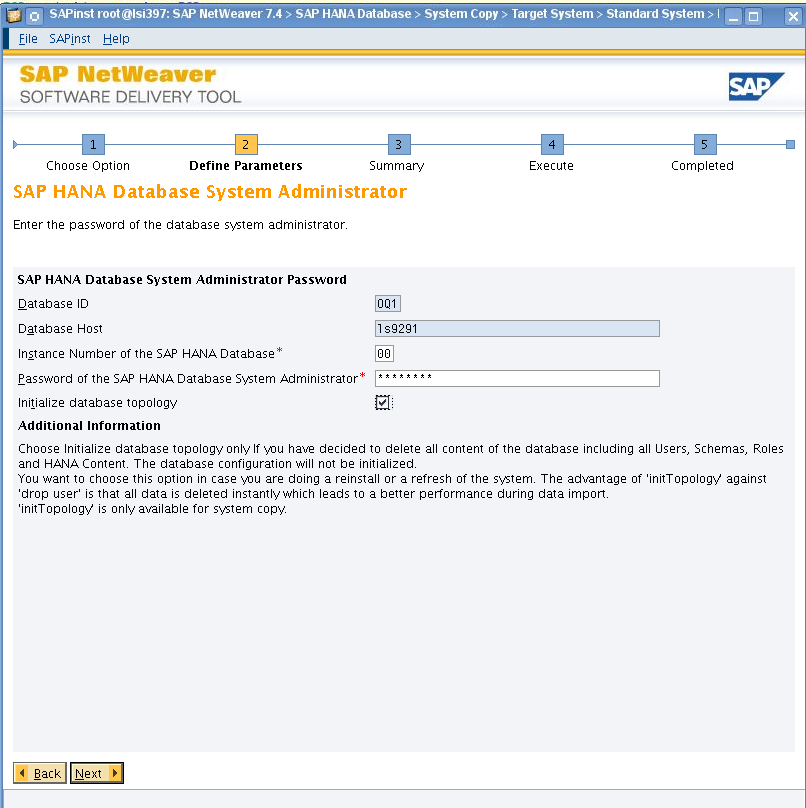